The Fitbit Ultra is a pretty deceptive piece of technology. For a lot of the time you are wearing it, you completely forget it is there. But it is there. Constantly monitoring your movements.  And at the end of the day/week/month it will give you an accurate depiction of your level of activity (or lack there of) which will hopefully inspire you to do more.

This is not a device for elite athletes. You can’t wear it while playing a contact sport. It is not water proof and it does not have GPS built in. It will, however, tell you how many steps you’ve taken each day, how many flights of stairs you’ve climbed, how many calories you’ve burned, how far you’ve walked, how well you sleep and ─ if you’re disciplined enough ─ you can even track what you eat. 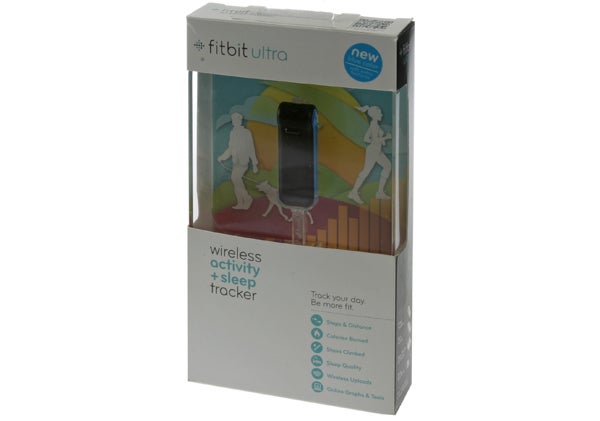 But the big question is, will it make you more active and in the process help you lose weight? Let’s find out.

Fitbit is a company that has enjoyed a lot of success in the United States in recent years and it has now brought its products to the UK. The Fitbit Ultra is a small activity tracker that wirelessly syncs your data and automatically uploads it to your online profile, allowing you to track how active (or otherwise) you’ve been over an extended period of time.

The unit itself is a rather attractive black and blue clip which can be attached to your belt, bra or even just kept in your pocket while you carry out your daily life. Finished in soft touch plastic, weighing just 12g and measuring 53 x 17 x 16mm, it is as discreet as you are likely to get. Indeed most of the time we’ve been wearing it (on our belt if you must know), we’ve barely realised it’s there.

The build quality and design of the Fitbit Ultra do mean it is small and
sleek enough to go unnoticed while on your person, but this also means
it is more likely to get lost or thrown in with the laundry. And with no
way of remotely finding it, this could be a costly exercise. 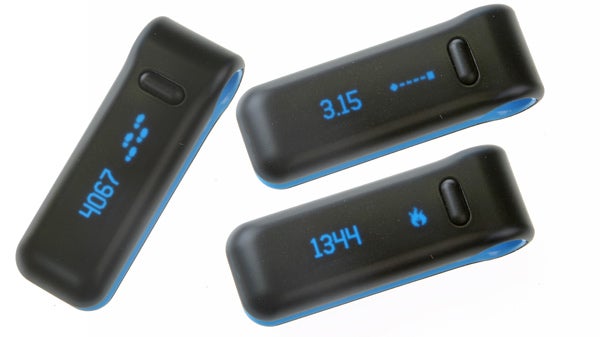 On one side of the clip is a small LED screen and a button to activate it. The screen displays your daily information, with button clicks cycling through your steps taken, distance travelled, calories burnt, floors climbed and recent progress – in relation to your recent history.

As well as giving you the hard data of your daily activity, the Fitbit Ultra will also give you little greetings (“Hi David”) or motivational messages (“Burn It”) or just some truly odd sayings (“Eggnog” and “Step Geek”). A nice touch, which makes it a little less daunting for people unused to using such devices.

Inside, the Fitbit Ultra uses a combination of 3D motion sensor, accelerometer and altimeter to calculate your various achievements. The altimeter measures elevation so if you find yourself running or walking up a hill, this will be added to your daily “flights climbed stat.”

Inside the box you will find the USB-powered dock, a plastic holder for a bit more protection while wearing the Fitbit Ultra and a soft, felt wristband to use while in bed to track your sleep patterns.

Setting up the Fitbit Ultra was a bit of an issue for us at first. The problem, it seems, was that we were using an older version of Mac OS X that the downloaded software just wouldn’t jive with. However a quick email to the support department later, we got sent another version of the desktop software, which worked perfectly.

The set-up process is fairly routine. Enter all your relevant personal data (including height and weight of course) and you’re off and running. One thing to note, however, is that there is no instructions with the unit regarding downloading the software – neither in or on the box – which could cause some issue for the non-technical people this product is aimed at.

Fitbit says that the Ultra will last for between five and seven days on a single charge, with charging taking between one and two hours. In practice this battery life seemed to pan out, and we got almost a full week on a single charge.

If the battery runs low, Fitbit Ultra will enter power saving mode where it will continue to collect data but won’t display any of it on the screen. Also if you fail to upload all you data and the internal memory is running low, the Fitbit Ultra will only collect a limited amount of data each day to save space. 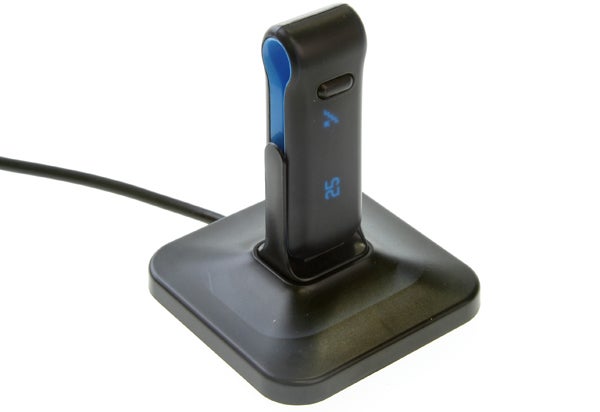 Charging the Fitbit ultra is done via the supplied dock, which is also used to wirelessly sync the stored data on the tracker after plugging the dock in.

Once the tracker has synced with your laptop, you can go to the website where you will be able to see exactly how active or inactive you’ve been. Graphs show you what times of the day you’ve been most active and you can even see your total active versus total inactive time –  a graph that really puts things in perspective if you sit at a desk all day.

The interface on the website is pretty straightforward. You’re first faced with today’s activity, which will be empty should you have failed to sync your Fitbit Ultra. However, you’ll also be click back day-by-day to see previous activity. This is also where you can enter various activities you have carried out during the day, which the Fitbit ultra may not have captured, such as a gym session, football match or cycling trip.

Clicking the Historical tab will bring up graphs of the past 30 days showing you’re average daily active time, as well as steps taken, floors climbed and all the rest so you can see if you are getting more or less active. 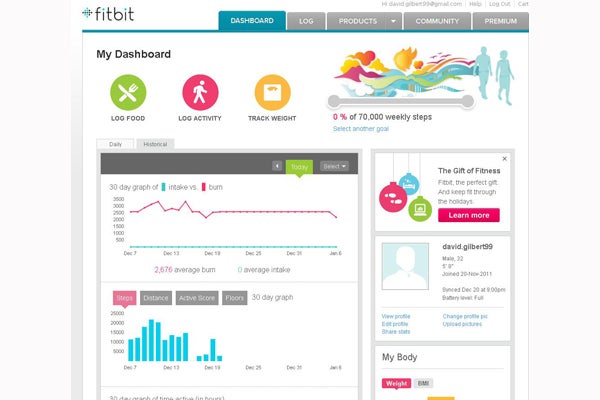 On the right-hand-side you’ll find your profile information as well as a tab which shows your weight and BMI. There is also an Achievements tab where you can see your best daily totals, your lifetime total and where you rank among your friends.

Beneath this are the Fitbit badges (similar to those earned on FourSquare) which you can earn by carrying out certain activity each day. These include the likes of walking 20,000 steps in a day, hitting 50 miles since starting to use the Fitbit Ultra, as well as fun ones like when you have climbed the equivalent of the Empire State Building. All these are a bit gimmicky but do add to the interest of using the device, giving you an incentive to try harder.

The website also has a community area where you can connect with friends, speak to other Fitbit users and read various forums on recipe ideas and updates to the device and online services. 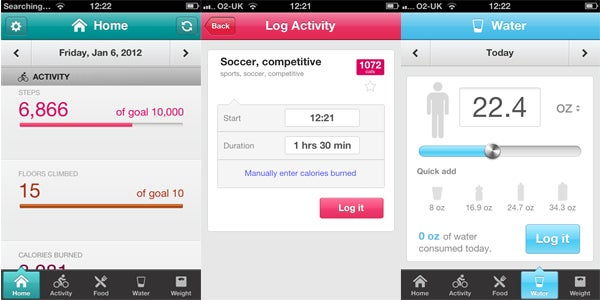 While the Fitbit Ultra attempts to track your weight and calories burned, this of course requires you to input everything you eat manually. For most people – like us – this will be too much of an effort. Even though you can also do this through the iPhone app, remembering to do it every time you eat is just too much of a struggle.

Another problem with the food entry system is that so far suggestions which come up will be based on American food chains and portion sizes rather than UK ones, though Fitbit has confirmed it is working with UK restaurants, supermarkets and coffee shops to roll out a database of UK-based food and portion sizes.

The iPhone app, which is now available for free from the App Store, allows you to log a variety of aspects of your day including a specific activity, your current weight, food intake, and water intake as well as seeing your recent activity. There is no option to wirelessly sync your Fitbit Ultra with your iPhone which would be a nice addition.

You can also sync your Fitbit data with other apps such as LoseIt!, RunKeeper, and Microsoft HealthVault. 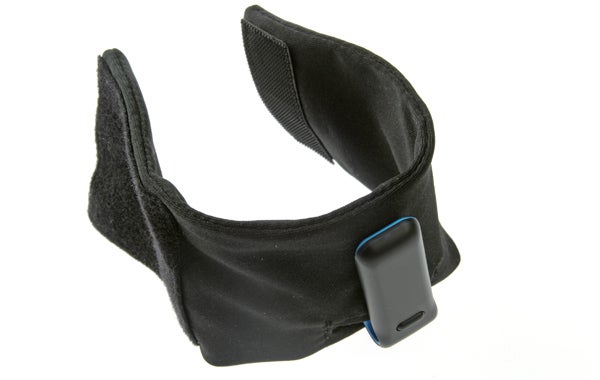 As we said, the Fitbit Ultra will also let you track your movement during sleep. A felt wristband, into which you can slip your Fitbit Ultra, is supplied and when you head to bed you can simply strap it on, long press the button on the device and it will begin to track your sleep pattern.

Long pressing the button again when you wake up will signal to the device you are awake. This is a rather basic sleep tracking system which will only tell you when you are in deep sleep compared to restless period during the night, though it can be a good indicator of problems if you feel tired all the time.

The Fitbit Ultra is not going to be for everyone and at £80, it certainly isn’t cheap. However, for those looking for a discreet way of monitoring their daily activity (or lack thereof) and seeing where they need to do more exercise, the Fitbit Ultra is ideal. Seeing how inactive you are during the day is a real incentive to become more active and once you buy into the system, it can become addictive, pushing you to exercise more and more, which can’t be a bad thing.