For a relatively new budget brand in the UK, Finlux sure is prolific. It seems to have some new TV to send our way almost every week. And actually, while we might not have been blown away by the last Finlux TV we tested (the 32F6030-T), for the most part Finlux’s offerings have tidily outperformed the expectations raised by their ultra-affordable prices.

All of which, of course, is leading us into a review of another Finlux TV. And the 40S8070-T is arguably the brand’s most ambitious effort yet, for despite costing barely £600, this 40in set sports both 100Hz processing and Smart TV functionality.

More on these later. First, though, we want to doff our caps in the general direction of the Finlux 40S8070-T’s design. For while its bezel and rear are both a little chunkier than the current trend among more premium brands, the 40S8070-T is still a very attractive TV thanks to its ‘one-layer’ fascia and the rather appealing silver trim that wraps around the main black picture frame. Overall the set looks uncannily like Sony’s latest Monolithic designs, and that, in our opinion, is no bad thing. 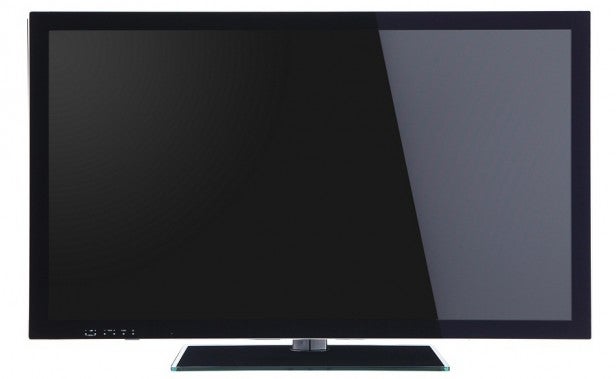 Connections continue the good news. The HDMI count is four – the same number found on even the latest flagship sets from the big AV names. There’s a LAN port for accessing the set’s online features, or else you can use a Wi-Fi dongle attached to one of the set’s two USB ports. Very impressively for such an affordable TV, the Wi-Fi dongle comes free with the TV, making us wonder why so many big TV brands in the past have forced you to pay as much as £100 extra for their Wi-Fi USB dongles.

Multimedia savvy
The LAN/Wi-Fi connections also allow you to stream in multimedia files from DLNA PCs, while the USB ports can play video, photo and music files or record from the built-in tuner. A tuner which, we’re pleased to say, is a Freeview HD one.

The last connection to mention is the D-Sub PC port, which allows you to double the TV up as a computer monitor even if your PC doesn’t support HDMI output. 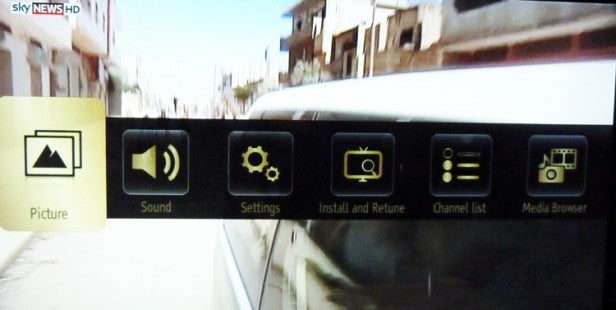 Setting the Finlux 40S8070-T up is something of a chore thanks to the rather unhelpful remote Finlux supplies. At first glance this handset doesn’t look bad. It’s big, reasonably spacious and even feels quite well built. But it doesn’t take long before an over-fussy and rather random button layout starts to irritate. Particularly irksome is the daft positioning of the Source select button and the way the cursor movement/selection buttons are crammed into a circle in the middle of the programme and volume up/down buttons.

The onscreen menus are drab despite their rather grandiose use of a gold on black colour scheme, but unlike the remote they are at least passably organised. They also have more features than might have been expected, such as colour shift and RGB gain adjustments, plus a Skin Tone tweaker.

Not surprisingly the Finlux 40S8070-T’s online content isn’t as prodigious or as classily-presented as that of the mainstream TV brands. But there’s still quite a bit more going on than we’d expected. Among the service highlights are the BBC iPlayer, Viewster, Twitter, Facebook, iConcerts, ITN News, Youtube, MyAlbum.com, and the TuneIn internet radio app. There are 27 apps available in total, with a little box at the bottom indicating that Picasa should soon be joining the available services.

Clearly Finlux’s Smart TV network currently lacks the sophistication to handle payment transactions, so there’s no place for subscription- or rental-based like Netflix, LoveFilm, and Acetrax. But this is no more than we would have expected of a budget TV online service, really. 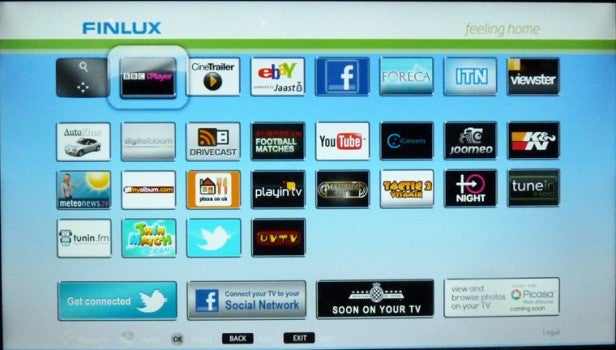 It just so happened that during our tests the England v France Euro 2012 game came on (total coincidence, obviously…). And right from the off we were pleasantly surprised by the quality of the images on show.

For starters, the set didn’t fall prey nearly as badly as we would have anticipated to motion blurring. For while there wasn’t the same total clarity over moving objects witnessed on the recent high-end LCD stars from Sony, LG, Panasonic and Samsung, you could still make out the numbers on the players’ shirts even when watching wide-angle shots. Also, crucially, there’s no sense of smearing around or behind the players as they charge about.

There is a little smoothing of the grass mowing lines during camera pans, but plenty of far more expensive TVs than the 40S8070-T suffer with that too.

Good HD sharpness
ITV HD pictures aren’t by any means the most sharp and detailed HD pictures in town, but the Finlux 40S8070-T does a fair job of ensuring that they do at least look genuinely HD – so long, at least, as you avoid the provided noise reduction system, which tends to introduce too much softness to proceedings as it goes about attempting to smooth away noise which, frankly, wasn’t there in the first place.

The NR is obviously of more potential use when watching the horrendous mess of ITV’s standard definition footie footage, but to be honest the processing engine isn’t nearly clever enough to improve things here either, instead just making pictures look even softer. 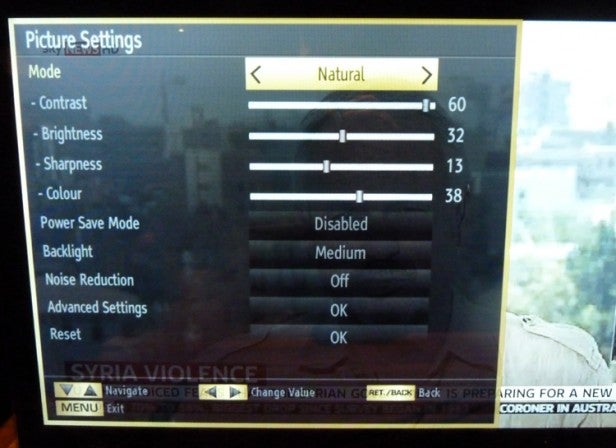 We’ve been sidetracked into a couple of negatives here, though, when there are actually more good points to discuss. Like the 40S8070-T’s colours, which tackle the greens of the pitch, the blue of the French shirts and the white of the English shirts in surprisingly credible fashion for what is, let’s not forget, a budget TV.

Switching to less dramatically colour-rich fare reveals a lack of finesse to the TV’s palette that leaves skin tones a touch plasticky and the colour mix overall a bit cartoony, especially with standard definition. But at least colours are vibrant and the picture is generally bright, neither of which can be taken for granted on a TV as affordable as the 40S8070-T.

Despite the Finlux 40S8070-T’s brightness, we were pleasantly surprised while watching normal TV fodder by the picture’s apparent contrast. Certainly the screen seemed game enough to at least try and produce a passable black level response – though of course, the real truth of the set’s contrast pudding won’t become apparent until the footie’s over and we’ve put a couple of dark movie scenes on.

So with England’s handy – if slightly drab draw – complete, we turned to a couple of tried and tested dark Blu-ray scenes from Casino Royale and the last Harry Potter film. And right away we were mightily relieved to find the screen not suffering with the nasty ‘floodlight’ of backlight bleed in its bottom right corner that so blighted the 32F6030-T. 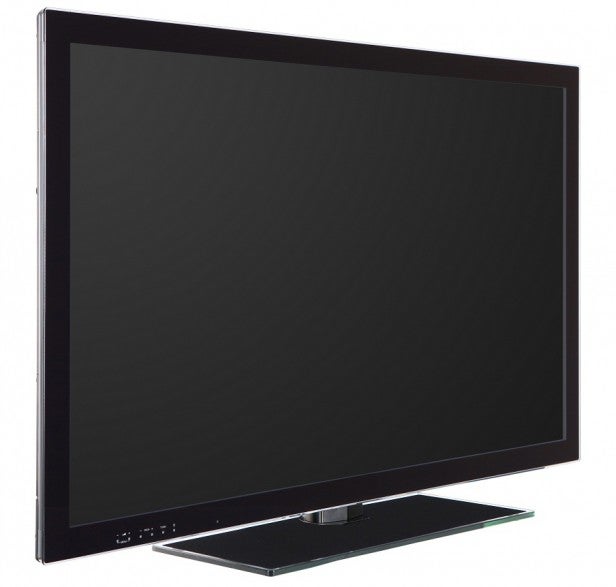 In fact, dark scenes are surprisingly watchable. For as well as suffering much less with backlight inconsistencies – especially if you use the relatively ‘relaxed’ Cinema picture preset – there’s a noticeably deeper, richer look to black colours than is standard with budget TVs. Even better, the set manages to retain a passable amount of shadow detail in dark areas. This is helped by the fact that unlike most other Finlux TVs we’ve seen, with the 40S8070-T you don’t need to activate the black crush-inducing HDMI TruBlack option to get a decent black level response.

Minor backlight flaws
We must stress that for all its improvement over the 32F6030-T, the Finlux 40S8070-T’s backlight uniformity isn’t perfect. At times of almost complete blackness you can see a few areas of extra greyness, especially in one patch about six inches across from the top left corner. But their impact is sufficiently minimal that they they only become distracting during very small amounts of your overall viewing time, and thus we don’t consider them a deal breaker. Especially at the 40S8070-T’s price.

There are a couple of other negative points to mention, namely that the screen is a touch reflective of direct light, and that patches of very small detail can shimmer a little, as if the screen is struggling to resolve them accurately. But it’s definitely the picture positives that ultimately win the day. 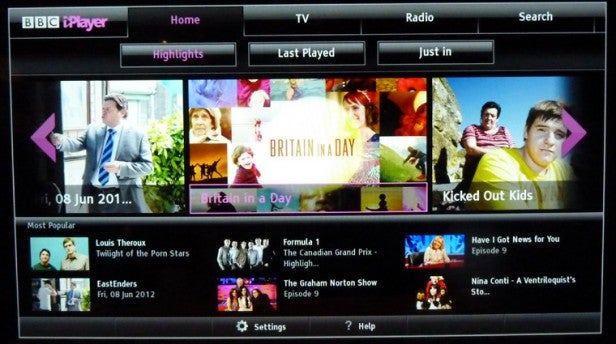 Sonically the 40S8070-T isn’t anything special. The set doesn’t sink into outright distortion and wince-inducing harshness like the worst flat TV offenders, but it certainly lacks dynamic range, with minimal bass and a rather overcrowded mid-range that results in anything beyond simple ‘chat’ sounding thin and tinny.

Anyone thinking of running a games console into the 40S8070-T might have to think again. For our tests measured a rather hefty input lag figure of around 100ms using the set’s Game picture preset, which could certainly be high enough to negatively affect your skills with fast-reaction games.

Verdict
The Finlux 40S8070-T may exhibit a slightly basic approach to colours together with some minor backlight flaws and a high level of input lag, but still overall we were quietly impressed by it. It goes about its cost-effective business in confident style, combining pictures that are a clear cut above the budget norm with a nifty design and some surprisingly solid online and multimedia options.