We don’t mind saying that we’re mighty relieved to find the Finlux 32F6030-T sat on our test benches today. For this gloriously uncomplicated 32in budget TV represents some much-needed relief for our aching brains from the glut of seriously high-tech, cutting edge and thus really hard-to-review AV kit that’s come our way in recent days.

The simple – yay, simple – facts about the 32F6030-T are these. It’s a 32in TV from Finnish brand Finlux (now actually owned by Turkish brand Vestel) that despite using edge LED lighting and sporting an HD Freeview tuner costs just £249.99. Yes, that’s right, £249.99. So rather than getting involved in 3D this, Smart TV that or 4K the other, all we need to do here is find out if the 32F6030-T is really as much of a bargain as it sounds. 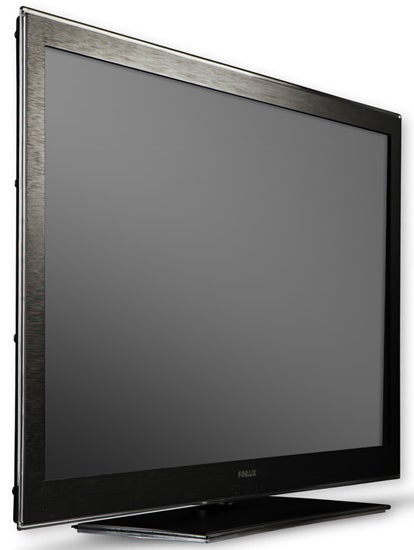 Design wise the 32F6030-T does a clever job of hiding its budget origins. It’s made of plastic but cunningly applies a kind of wood grain finish to its black bezel that makes it look quite a bit more plush than it would otherwise. Another nice touch is the few mm of transparent trim that sits around the inner black bezel – a design feature clearly borrowed from Samsung and LG.

Stand proud
As TV reviewers we’re thoroughly fed up with always having to build stands for TVs we’re testing, and we are also big fans of the way the 32F6030-T just clips on to its desktop stand – though it has to be said that the set does sit slightly flimsily on its mooring.

The Finlux 32F6030-T’s connections are startlingly numerous. For starters there are four HDMIs when frankly we’d have accepted two on such a cheap set. Even more surprisingly you get two USBs capable of playing back not just JPEG photos but also music and even video files. Then there’s the D-Sub PC input that adds even more to the TV’s value by allowing it to double up as a PC monitor, and to top it all there’s even a LAN port.

Except that actually this LAN port doesn’t actually do anything useful; it’s just there as mandatory support for the Freeview HD tuner, and doesn’t allow you to connect the TV to either a DLNA PC or the Internet – despite the remote control for the TV sporting an Internet button.

It really wouldn’t be reasonable to expect either DLNA or Internet functionality on such a cheap TV, though. And anyway, there’s a fine bit of compensation in the fact that amazingly for such a budget set, the Finlux 32F6030-T supports recording from its Freeview HD tuner to USB HDDs. Blimey.

Looks aren’t everything
We guess it has to be said that the interfaces for the 32F6030-T’s various multimedia functions are pretty rudimentary. But they get the job done well enough when push comes to shove, so what are a few presentational issues between friends?!

The main onscreen menus are actually a slight cut above the rather ‘ZX Spectrum’ designs of previous Finlux TVs we’ve seen, presenting their various logos and text in a rather fetching shade of gold and using text which is big enough – just – to be readable without the help of a magnifying glass.

Features within the onscreen menus of the Finlux 32F6030-T chiefly comprise a small but passably effective set of picture presets, a backlight adjustment (including an Auto setting), a straightforward noise reduction option, a multi-level dynamic contrast processor, and even a degree of colour management in the form of a skin tone ‘slider’, a further slider for shifting the underlying green and red colour balance, and the ability to boost or reduce the gain of the red, green and blue colour elements.

Good first impressions
First impressions of the 32F6030-T’s pictures are strong. We kicked off with a bit – oh alright, a good few hours – of England’s cricket match against the West Indies in HD via Sky, and really liked what we saw. Colours look much more dynamic and vivid than we would have expected from such an affordable and relatively small TV for a start, with the greens of the Lord’s turf looking luxuriant, the whites of the players looking crisp and pure, the blue in the on-turf logos looking rich and vivid – and Sky’s inevitable preponderance of logos and onscreen graphics all looking punchy and intense. Honestly, if these sort of colours were appearing on a set costing twice as much we’d still feel content. 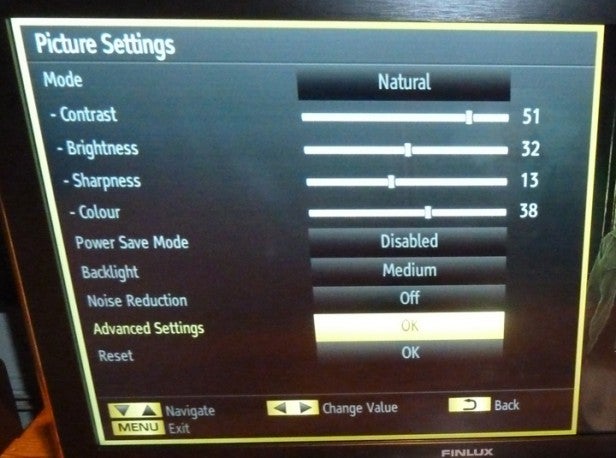 Also a big cut above the budget small-screen norm is the 32F6030-T’s motion handling. For even though the set doesn’t have 100Hz processing, much less any sort of blinking backlight or frame interpolation processing, objects and camera pans both pass across the screen without the overt smearing or judder we might have expected. Sure, there’s clearly a reduction in resolution with moving objects, but it’s not a big deal at all for the set’s money. Partly because of this respectable motion handling, HD images also look pleasingly – though not, it must be said, emphatically – detailed and sharp.

Decent contrast
Yet another area where the Finlux 32F6030-T goes beyond the budget norm is its contrast. For as well as the decently crisp whites already noted, the set produces some surprisingly decent black levels too, even if you stick with the set’s picture preset defaults. And to be clear about this, we’re talking about decent black levels existing in the same frame as punchy colours and crisp whites. Black’s don’t only look black when you’re watching nearly all-black scenes where the dynamic contrast system can just take all the brightness out of the image. 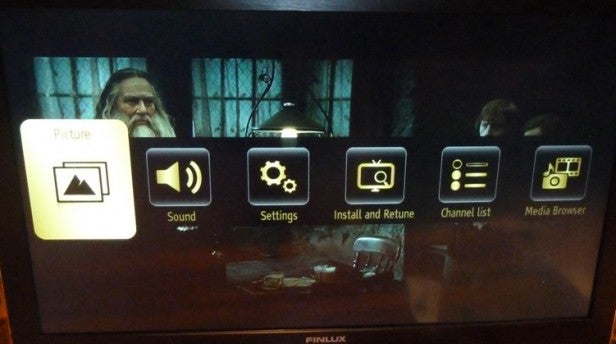 The dynamic contrast system also deserves plaudits for not being too obvious in its machinations, with very few occasions where you see the image’s general brightness levels shifting around so much that it becomes a distraction.

With bright, colourful HD footage, in fact, the 32F6030-T gets mighty close to earning an eighter-pointer score for its pictures, which is pretty good going for something so darned affordable.

All of which will doubtless have you wondering why the overall mark at the top of this review only reads a five. So we’d best explain ourselves.

The first thing that starts to drag the Finlux 32F6030-T’s score down is its standard definition performance. Firstly, the colours that work so effectively with HD take a definite downward turn with standard def – especially relatively low-quality standard def from the TV’s own built-in tuner. Skin tones look blotchy and uneven, and there’s generally less balance in the colour palette.

There’s also an impossible-to-remove yellow bias to proceedings, and a general reduction in vibrancy. Such colour issues are actually a surprisingly common find in TVs that don’t have the best upscaling processors.

It should be added, though, that while colours might look a bit off with standard definition, the 32F6030-T does at least avoid making its standard definition pictures look soft and/or noisy like they can on budget sets – or even some TVs costing considerably more.

Backlight mess
By far the biggest problem with the 32F6030-T’s pictures, though, and one we really find it hard to see past, is its backlight inconsistency. We’re pretty used now to edge LED TVs suffering to some extent with ‘clouds’ of excess brightness hanging over some parts of their pictures during dark scenes, but seldom if ever have we seen such aggressive clouding as you get with the Finlux 32F6030-T. In fact, a large patch of ‘light bleed’ coming in from the bottom right corner of the screen – covering a good 10 square inches – is so excessive that you can even make it out during fairly bright footage. 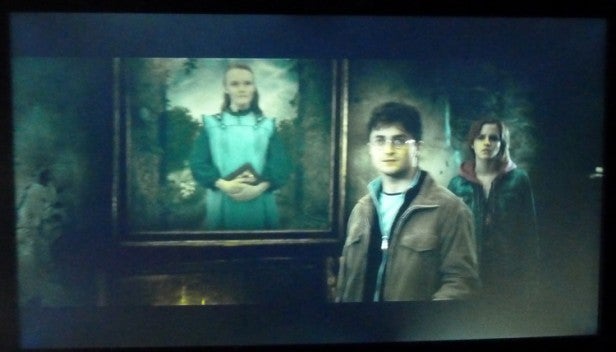 Needless to say, the damage this area of backlight bleed – and a couple of other less egregious but still certainly noticeable areas of bleed along the bottom and top left edges – does during dark scenes is bad enough to render them almost unwatchable. In fact it’s so bad that it effectively kills the TV as something you could sensibly watch a film or, so far as we’re concerned, play a serious game on. Damn.

This is particularly unfortunate considering that provided you stick with the 32F6030-T’s Game preset, it measures only 30ms or so of input lag through its HDMI. This is a low enough figure to have minimal effect on your gaming prowess. 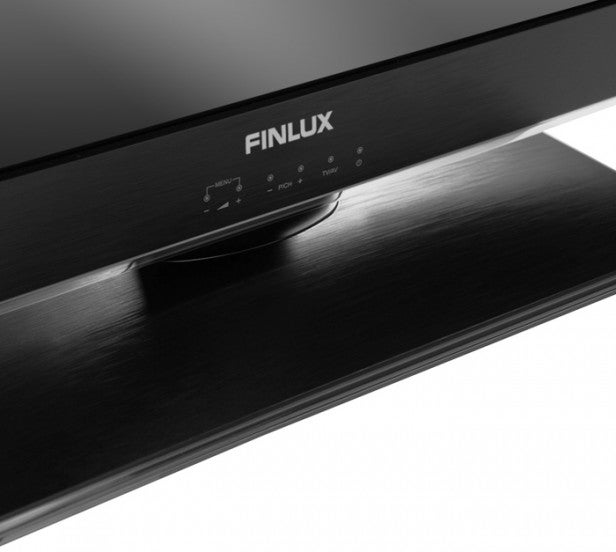 Wrapping up with the Finlux 32F6030-T’s sound, it’s not too bad by really cheap flat TV standards. Sure, there’s precious little bass to be heard, and maximum volume levels are hardly going to fill the Albert Hall. Loud moments can sound pretty harsh, too. But voices sound clear, trebles are reasonably detailed without sounding horribly thin, and the cabinet doesn’t succumb to phutting vibrations easily. All in all, the 32F6030-T’s sound is just about fair for a budget slim TV.

Verdict
We’ve been reasonably impressed by many of the Finlux TVs that have come our way so far, finding them able to offer a level of performance and features that go beyond their price points. But due to some startling carelessness with its backlighting, the 32F6030-T sadly does not continue the Finlux run of form.