Finlux TVs have a pretty chequered past in performance terms, but we’re happy to say that the 40F8073-T is one of its hits, handling most of the traditional weaknesses associated with very cheap LCD TVs unusually ably.

When showing dark scenes, for instance, the usual budget TV problems of grey misting over black areas and backlight inconsistency (AKA clouding) are reined in very well. Especially with the backlight set to low as we recommend for watching films in relatively dark room conditions. 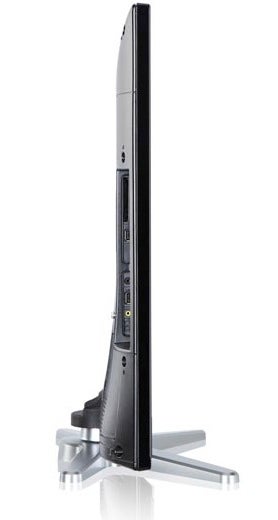 There’s a degree of shadow detail lost in dark areas, but this isn’t nearly as extreme as we would have expected on such a cut-price TV. Certainly the loss of shadow detail doesn’t go so far as to make pictures look hollow, as often happens. And nor do the darkest parts of the picture suffer the distracting glowing effect associated with some budget TVs.

As noted in passing in the Set Up section, initially we found the Finlux 40F8073-T’s pictures to be very noisy, especially if your source material is grainy. However, once you’ve tackled this via the previously suggested contrast and sharpness adjustments, the picture’s level of sharpness and clarity is again a pleasant surprise, with strong levels of detailing, and much less resolution loss over moving objects than we’d normally expect to see on a budget TV.

To be clear on this last point the motion clarity is no rival for the efforts of some of today’s premium LCD TVs – though there’s something nice and direct about the fact that the Finluc 40F8073-T isn’t throwing any heavy duty processing at its motion reproduction.

Yet another area where the 40F8073-T works hard to avoid traditional budget TV pitfalls is colour reproduction. The gaudy, PC-inclined tones often seen on such crazily cheap LCD panels are replaced by a colour palette that actually seems to have been tuned for video rather than PC use, complete with decently natural skin tones and reds and greens that seem well balanced rather than over-aggressive and ‘cartoonish’. A further sign of the 40F8073-T’s better-than-typical black levels and colour qualities is the way colours still look quite natural and subtle even during dark sequences.

There isn’t as much finesse in the way blends are rendered as you get with higher-end TVs, and the colour range falls far short of that witnessed with premium LCD TVs, especially during dark scenes. But again, considered against similarly priced competition the Finlux 40F8073-T does really pretty well in both these areas.

There are inevitably some places where the 40F8073-T’s budget nature is apparent no matter how much you tweak the picture settings. First, areas of fine detail – people’s hair, stripey suits etc – often look rather shimmery and distorted. Second, where an edge in the image contrasts particularly sharply with its surroundings it can look very stressy and even glowy on the 40F8073-T, as if the panel is being too strongly overdriven.

But while undoubtedly sometimes distracting, these issues can be considered pretty small beer versus the sort of picture horrors we might have expected on a £320 40-inch LCD TV.

Used as the main TV for the review period
Tested for more than a week
Tested using industry calibrated tools, discs and with real world use
Tested with broadcast content (HD/SD), video streams and demo discs
Previous
Finlux 40F8073-T Review Next
Sound Quality and Verdict Review