With our TV reviews this year looking set to be more dominated than ever by expensive high-end models – especially with 4k and OLED waiting in the wings – we thought we’d take a quick time out with the Finlux 40F6050: a refreshingly back to basics full HD 40-inch LED-lit TV that can be yours for just £290.

Surprisingly for such a cheap TV, the 40F6050 isn’t a munter. For starters, Finlux seems to be gradually shrinking the bezels of its TVs, with the 40F6050’s coming in at only a couple of cm across. This bezel is tastefully angular too, and while its gloss black finish is hardly unusual, it does gleam a bit more engagingly than most. 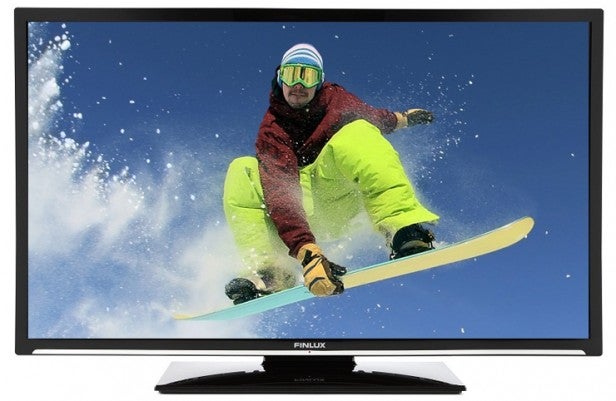 A cute touch of extra glintiness, too, comes courtesy of a shiny silvery metal strip running along the bottom edge. The squat desktop stand is a bit plasticky, but overall the 40F6050 delivers a much higher level of aesthetic appeal than you’ve any right to expect from a 40-inch TV costing less than £300.

Connections are nothing special, but they’re solid enough for a budget TV. Two HDMIs get the ball rolling, and these are joined by a D-Sub PC port, two Scarts (does anyone actually use those any more?!), and two USBs. The USBs can be used for either playing back video, music or photo files from USB storage devices or, rather surprisingly, timeshifting from the built-in Freeview tuner.

Eagle-eyed readers may have noticed we haven’t mentioned any network connections so far. And the simple reason for this is that there aren’t any. This means you can’t take the TV online or stream files from a PC – fair enough for such a cheap TV. Harder to swallow, though, is the fact that no LAN port also means no HD tuner. Yes, that’s right: despite Ultra HD TVs now starting to pop up fairly commonly these days, the 40F6050’s digital tuner is standard definition only.

This will make it a non-starter for some of our readers, for sure. But let’s not forget the set’s £290 price. It seems to us there’s a good chance such a cheap 40-inch TV may be destined for second rather than main room use, where affordability and USB multimedia playback are likely to be much more important than whether broadcasts are received in HD or not.

In fact, let’s be honest; if the 40F6050 manages to make its pictures look pretty good, we can also imagine the set finding its way into more than a few of the UK’s currently cash-strapped living rooms.

We wouldn’t have been entirely surprised if the 40F6050 had been driven by old-school CCFL lighting, given how cheap it is. But no, it employs an edge LED system, lighting a full HD panel.

There are a few spec-sheet reminders of the 40F6050’s budget nature,
though – most notably a fairly low-looking claimed brightness of
350cd/m2, a bog-standard 50Hz refresh rate with no motion processing,
and a response time of 10ms which raises concerns about motion blur and
smearing.

Next
Specs and Performance Review