For a franchise many have long accused of never really changing – EA charged with rolling out much the same release year after year – FIFA isn’t half doing a good job of retooling itself for the modern era.

Ultimate Team, like other recent FIFA games across a multitude of different formats, is no longer merely the play-with-your-mates-after-a-night-at-the-pub simulation that’s sold millions for decades. Instead, it’s now a package, a slick and sleek service, a fully rounded product that attempts to take the core appeal of the beautiful game and turn it into a genuine video game.

In this day and age that means going free-to-play, which is a process that’s turned FIFA into something of a Pokemon style lottery. You buy packs of random players, you turn them over in dramatic fashion, and you attempt to piece together the ‘ultimate team’. It’s a process EA set in motion years ago and one that’s proved especially popular on console because it combines an element of chance – buying packs full of players you can’t see – with skill, with much resting on your ability to put together a squad that works on a team. 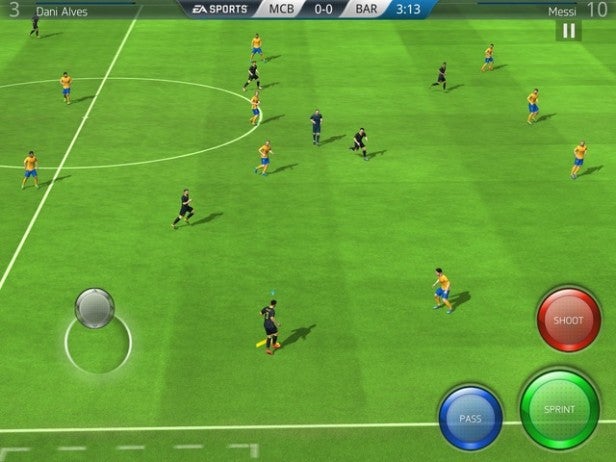 Whatever formula you play in or strategy you choose, the abilities of your players are raised if you can line them up in an arrangement that builds chemistry. Players with the same nationality, for instance, will perform better if playing next to each other, while it’s also best to line club team mates with each other. It’s the footballing equivalent of solving a Rubix Cube – moving one player from one position can mess up the chemistry of the entire squad.

It’s the delicate nature of this balance that encourages players to keep on buying and opening new packs, which is the core appeal of FIFA 16: Ultimate Team. It’s a set up that almost overshadows the actual act of playing a game of football itself, which is perhaps wise. FIFA 16 is by no means a terrible game to play, but by the same token, it’s fair to say that things aren’t really moving on. While FIFA on console manages to make a steady, if unspectacular, progression on console with each release, on mobile the on pitch action feels much the same as it did four, five or even six years ago.

Using virtual buttons to pass, tackle and shoot and a movable virtual thumbstick, play ultimately feels a little loose, and though it’s possible to piece together free-flowing moves that open up your rival’s defence, successful moves usually feel the result of the game giving you a helping hand to achieve your vision rather than you somehow cracking a stubborn opposition. Pass it around long enough and you’ll often find your rival’s defence parts in the middle to let you through, or simply doesn’t tackle as you make a run. 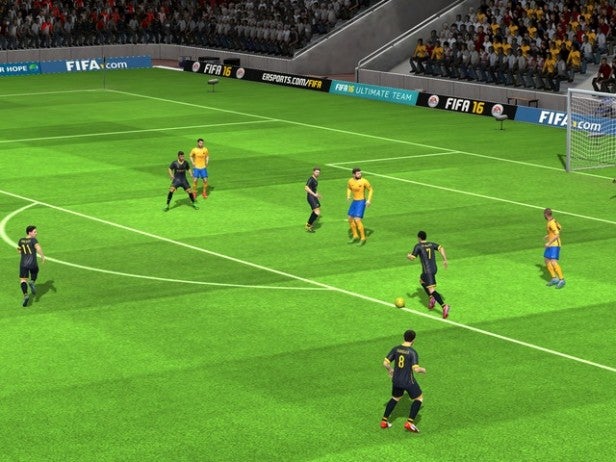 It all feels like a bit of a compromise, which perhaps explains why the more successful and ultimately the more lucrative part of the game, Ultimate Team, is now EA’s priority. Such is its addictiveness you could almost push it as a product of its own, though the development team has had the commercial sense to wrap it in all the kinds of paraphernalia fans have come to expect; one off matches, online tournaments, etc etc.

Does that make an okay a genuinely good game? Not really. FIFA 16: Ultimate Team is a process, and ultimately you’ll get a better grasp of the beautiful game taking on a series like Score! than you will attempting to live out your footballing fantasies on FIFA’s pitch.  The Ultimate Team formula is already a proven one and if you’re of a ‘gotta catch em all’ mentality, it’s hard to argue that there isn’t much here for you to enjoy, but as a simulation of a game of football, FIFA 16 is something of a non-event.

Verdict
Ultimate Team is undoubtedly an addictive package, but as a simulator of the beautiful game, FIFA 16 feels like a game stuck in the mud, delivering a slightly loose take on play that hasn’t progressed over the last few years. More effort needs to be spent on upping the on the pitch action in future releases rather than pushing Ultimate Team’s card pack based play.