Announced and launched at Bethesda’s E3 conference on Sunday, Fallout Shelter is a mobile Fallout 4 spin-off with a little more class than your usual phone/tablet tie-in. While it is, at heart, little more than a Fallout-flavoured spin on the Tiny Tower resource-management sim, it’s been made with respect and affection for the series’ fifties-styled, post-apocalyptic universe, which carries over into every aspect of its look, sound and feel. It’s a shame that the game underneath lacks weight and comes saddled with some of the usual problems of a free-to-play business model, but as a simple time-waster it’s not bad.

The setup is simple. You are the overseer of one of Fallout’s vaults, looking after the needs of a growing population of survivors, putting them to work and preparing for the future. This effectively comes down to just a few things: building rooms to support your survivors, providing the resources those rooms they need to keep running, allocating survivors to rooms to get the work done, while finding ways to keep your numbers on the up. And if it helps to send explorers out into the wastelands, armed and armoured with the best kit you can scavenge, then do that too. Your explorers might come back with riches, experience and other resources. 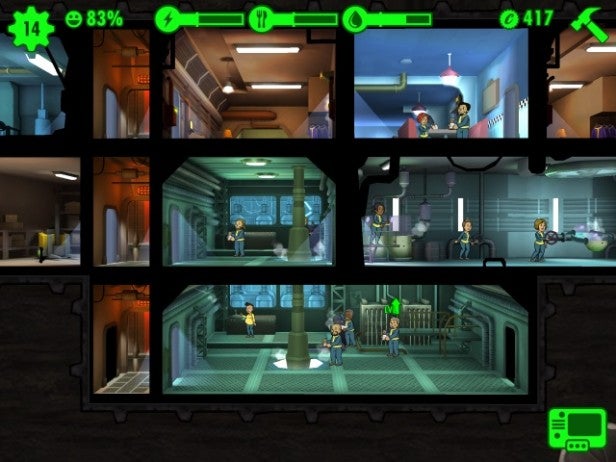 It’s a fairly simple game to pick up, helped by a clean interface and a concise tutorial. You see the shelter from a side-on view and can tap the little cartoon survivors to check their status. You can then drag and drop them to a room to get them working, to the living quarters if you think they need rest or an opportunity to romance, or to the wastelands outside if you want them in the field.

Your peoples’ basic needs are food and safe drinking water, plus the energy required to keep the vault going. Beyond the basic canteen, water plant and power plant rooms, you can then add storage rooms, living quarters, medical rooms, classrooms and more. As well as food and water, your survivors must also be kept happy. Putting them in the right rooms will help you do that, and keep them running more efficiently, but moving them around from job to job also seems to keep them keen. Meanwhile, you can either leave your rooms or run at their own pace or rush them temporarily to feed a momentary need. Succeed, and you’ll get additional rewards. Fail, and fire or infestation might sweep the room, ruin production and even harm the workers. 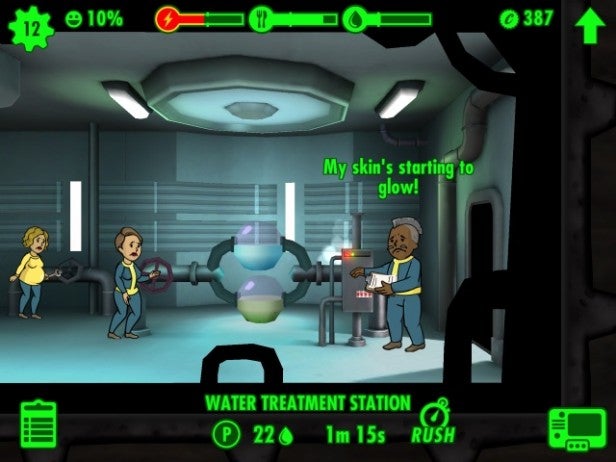 To keep building rooms and upgrading your existing ones you’ll need some hard currency, and that means completing objectives. You’ll have three at any time, ranging from producing and storing surplus energy to sending out an explorer or getting one survivor’s happiness all the way to 100%. Reaching these will net you some extra caps – Fallout’s cash – but also potentially a lunchbox. Containing five cars that gift you extra dosh, weapons, gear or useful perks, these can really put you on the fast-track to that next room.

And that’s a good thing. It’s not that Fallout Shelter feels slow as such – there’s plenty of busywork in keeping your survivors fitter, happier and more productive – but reaching the levels where you can add new rooms takes time. Ditto for equipping your explorers or building the rooms you need to pull in more than the occasional new survivor. 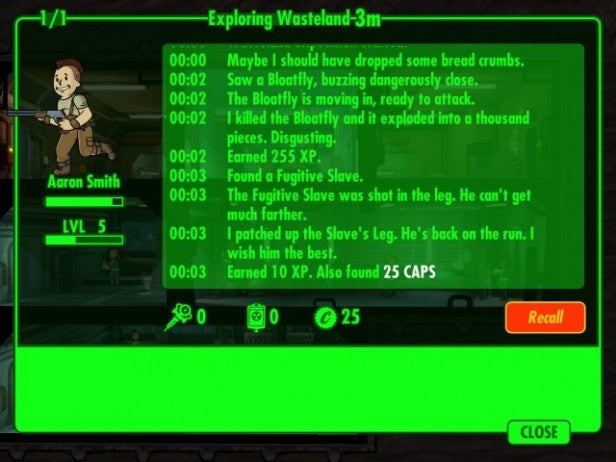 To grow the population, you can pair off survivors and hope they have kids or you can wait around for roaming survivors to show up at your door, but the kids take a long time to grow up while the wanderers don’t come all that often without a radio room in your vault. Unless you regularly reach your objectives, you can feel like you’re just shuffling the same survivors from room to room for hours on end.

Needless to say, there’s an easier, quicker way. Buy lunchboxes from the in-game store and you can speed up your cash intake, kit out explorers quickly and get rare and special gear, all of which improve the pace. Sure, Fallout Shelter is perfectly playable even if you don’t spend anything, but you need to be a patient player to try. 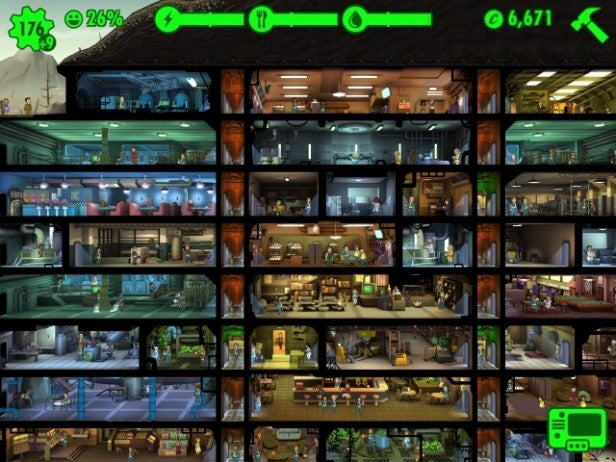 Frankly, that’s nothing unusual in the mobile gaming world, and there’s nothing really that unusual about Fallout Shelter’s gameplay. What makes it all feel vaguely worthwhile is the game’s personality and presentation. The overall style and design of the Fallout world is very much in evidence, as is the series’ dark humour. Your rooms are threatened by the usual problems – fire, radiation, disease – but also by radroaches. Your explorers report from the wastelands with blow-by-blow accounts if their fights, experience gains and health loss. We love the way you can double tap on a room to spy on your survivors and their oddball conversations, and we love the way that even the help files and notifications are rendered in the classic Fallout style.

And yet, when it comes down to it this isn’t as rich, original or interesting as it looks. While the lure of new buildings, more equipment and a bigger population is enough to get you hooked, you can’t help feeling that – as with so many casual mobile games – you’re not actually doing all that much or making meaningful choices. Even the objectives don’t get more interesting with time, and it’s frustrating that you sometimes have to undo some work you’ve just done because your new objective is to build a room you’ve already built again. The more you play, the more survivors you and rooms you have to manage and the more intense the action gets, but more work doesn’t necessarily mean more fun. This is a game that’s big on personality, but short on drama. Your people will get happier or angrier, your resource levels will go up and down, but mostly you’re just keeping things ticking along.

Verdict
We love Fallout Shelter’s humour and authentic Fallout style, but the gameplay isn’t more than a twist on existing mobile genres, and without the in-app purchases it can end up feeling like repetitive busywork. It’s a better class of timewaster than most games of its ilk, with a smarter interface and stronger visuals, but don’t expect a huge amount of depth.