In a way, Fallout 3 is Bioshock for the people who felt let down by Bioshock. Even more than last year’s much argued over masterpiece, it’s the successor to games from an older, maybe smarter era of PC gaming. Like Bioshock, it’s a game that takes inspiration from period style and classic science fiction, and like Bioshock it goes heavy on narrative, dark humour and atmosphere. Also like Bioshock, it transforms many of the conventions and play mechanics of the traditional RPG in order to make a game that appeals to a wider audience. Arguably, Fallout 3 does some of this stuff better. If you felt sad or irritated that Bioshock had ‘dumbed down’ from System Shock 2 then you can relax about Fallout 3. This might not be the Fallout you remember, but it’s far from being an FPS with light RPG elements. In fact, while the cliched description of Fallout 3 as ‘Oblivion with guns’ is inaccurate, this is every bit as much an RPG as The Elder Scrolls IV, and maybe even more so. 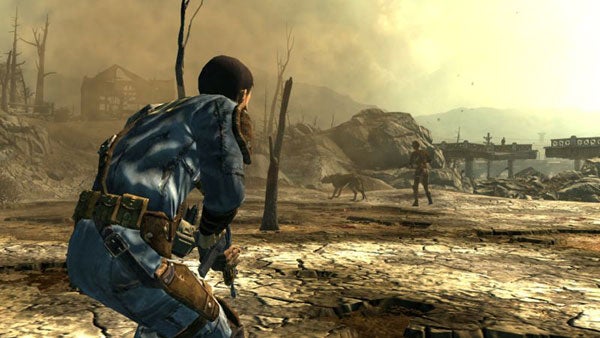 The setting, in case you don’t know, is a post-apocalyptic Washington that seems to have been nuked at the height of a fifties style revival. The mix of Mad Max and McCarthy era values might seem strange, but it actually makes perfect sense. This is the America that the more paranoid Americans of the period felt and feared they might one day see, and the game has a lot of fun at the expense of fiftied ideas and idioms. As an escapee from a locked and hidden bunker, Vault 101, you begin simply trying to find your missing father, but before long you’re caught up in a dozen narratives, big and small, that together paint a picture of a shattered world. 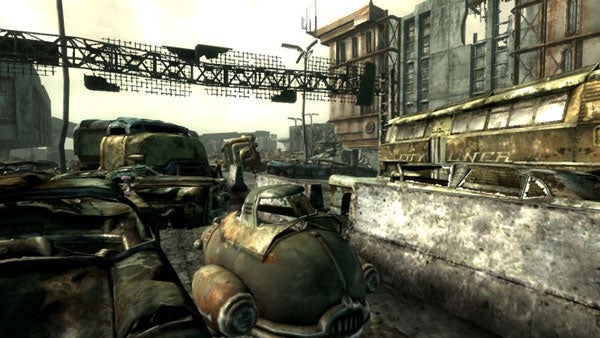 The atmosphere is as thick and heavy as an old-fashioned London smog. One of the big worries was whether Bethesda could produce a game as gorgeous as Oblivion in a setting dominated by cracked earth and concrete ruins, but the team has done so with a real flair, creating stark landscapes and fetid interiors that practically reek of catastrophe, plus a cast of superbly voiced characters that shimmer with personality. As with Bioshock, the use of period-inspired detail and music is inspired, putting weirdly familiar notes into jarringly unfamiliar settings. In terms of production design, Fallout 3 is as coherent and well-considered as games get. 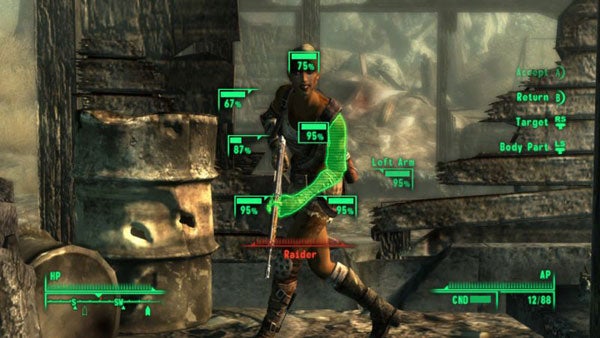 Another thing Fallout 3 does brilliantly is to fit in the sort of game mechanics RPG fans expect, but execute them in a way that doesn’t constantly drag you from the game world. Oblivion’s inventory screens and quest journal are replaced by the PIPBoy 3000; a stylish, vintage, wrist-bound PDA that gives you all the options and information you need to go adventuring. You can use it to equip weapons or armour, take stimpacks or eat food or check the map or the details of your current quest, and you never feel like you’re taking a break from the Fallout world. This sort of thinking permeates the whole game. If something can be shown or done within the game world, rather than an onscreen prompt or HUD item, it is. Stuck in town and can’t find the local supply store? Check out the signposts and you’ll soon be able to find it. 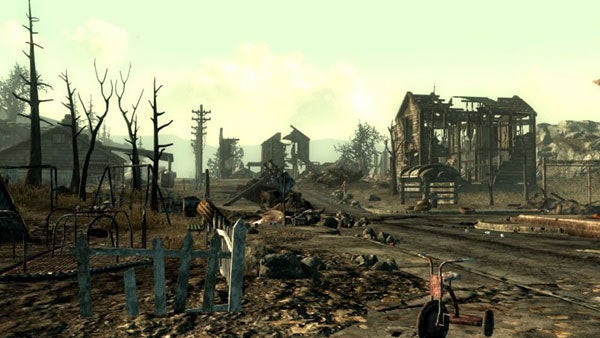 Of course, the major challenge in a modern, real-time RPG is to produce a combat system that doesn’t appear ludicrous or slow paced but still gives the player more to do than just point and shoot. Mass Effect struggled with this last year, and while Bioshock’s plasmids and combat skills were a nod towards the RPG, that game was still first and foremost an FPS. Fallout 3 covers both bases brilliantly. You can point a gun at the nearest killer dog or angry mutant and shoot, but you’ll struggle in all but the most basic combat situations. The trick is VATS – the Vault-Tec Assisted Targeting System. Squeeze the right trigger at any time and the action pauses, allowing you to select targets and individual body parts at your leisure before returning to real time and firing. Your chance of hitting and the damage you do are managed by good old-fashioned statistics, and a system of action points prevents you from squeezing headshot after headshot after headshot. Best of all, using VATS successful results in a nice visual payoff. Deal a crippling blow to the skull or an extremity and you can watch it get blown or smacked off in glorious slow-motion. It’s grim and it’s unnecessarily gory but, boy, is it fun. 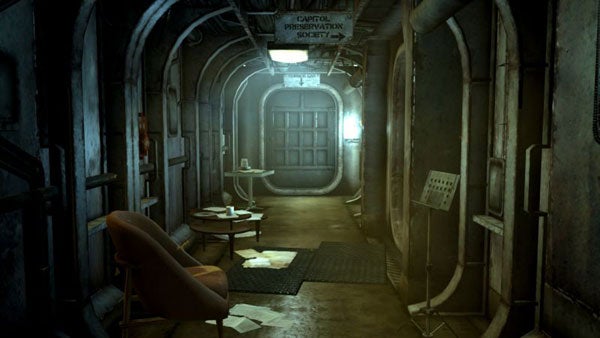 Is it as much fun as a good firefight in Gears of War 2 (full review coming soon) or Call of Duty 4? Maybe not, but then the pleasures of Fallout 3 go way beyond combat. This is, above all else, a quest and narrative based game, where dialogue is as effective a way forward in many situations as blasting, and where the use of hacking skills or subterfuge can give you options that mean you don’t actually have to do the fighting yourself. At any one time you’ll probably have multiple quests on the go, some linked to the main plotline, some that take you on bizarre tangents that, oddly, feel just as important. There’s the sort of freedom to go where you want and do what you wish that you’d expect from an RPG, and Bethesda has made the Washington area rich in things to do and enemies to kill, without going too far and making every journey a wandering monster nightmare (though the use of an instant travel feature helps alleviate that sort of thing anyway).

Meanwhile, a system of skills and perks as you level up, not to mention the ability to craft your own custom weapons, ensures that RPG stalwarts can’t complain too much about the lack of depth. This is still the sort of game where you’ll need to repair weapons and keep your radiation poisoning in check. It’s not as much hard work on this account as something like S.T.A.L.K.E.R., but it’s not the sort of game that you can just breeze through, regardless, either. 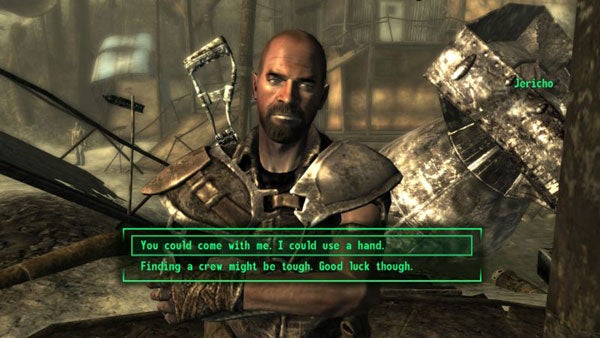 This is all great stuff, but for a long time I had my reservations about Fallout 3. The opening section where your father (Liam Neeson) effectively helps you create your character, is excellent, but after that the game seemed to struggle for a while with a series of quests set around the town of Megaton and its vicinity that didn’t do much to re-ignite my enthusiasm. I spent several long hours not really getting much done, and having my behind royally whupped by any half-fearsome monster I came up against. If this happens to you, all I can say is ‘give it time.’ Fallout 3 isn’t an instant hit; it’s a grower. If it were an album it wouldn’t be the one you played constantly for a week but then forgot, but rather the one that you’re not sure about for the first few plays, but still come back to ten years later. 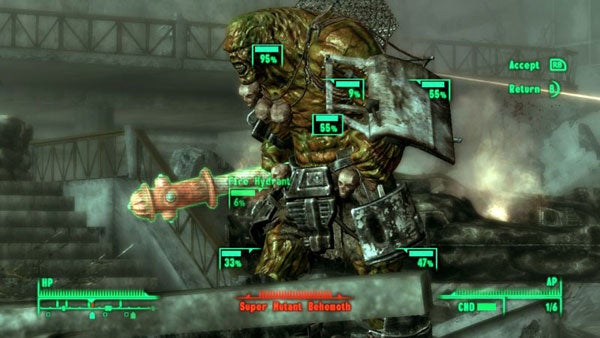 With Fallout 3 all it took was the right mission that led me to some better weapons that led me to some other great quests. Suddenly, I was hooked. Once the game has you in its clutches it won’t let up; the structure always leads you on to new areas and new opportunities for adventure, and each quest you complete only seems to push you on to something else. The current of the plot carries you along even while the sideplots are dragging you away from the main stream. It’s the sort of game where a quick one hour session is never enough. 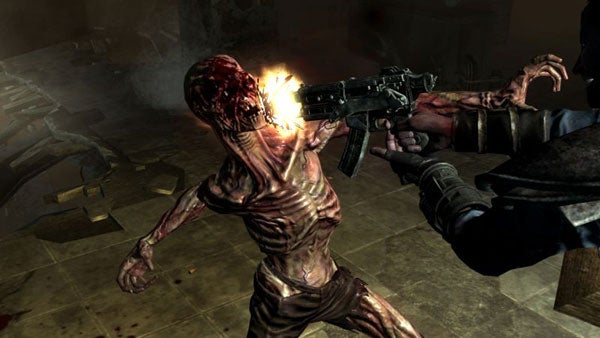 In fact, the only serious failing I can see is that Fallout 3 still doesn’t go much beyond Oblivion in creating a convincing world. There’s still something a bit flat or odd about the character modelling and animation, not to mention the presentation of dialogue scenes – all areas that Mass Effect got spot-on right – and there are still occasions when the behaviour of the non-player characters doesn’t seem to tally with your actions. Sure, charm skills and the wider system of karma ensure that you’ll get different responses depending on your charisma and your deeds, good or bad, but wouldn’t it be good if your fellow patrons raised an eyebrow when you shot a man dead and stole his clothes in the local bar? Or if the body had been moved when you returned a day later? There are times when you’ll feel a real emotional connection to the population and their stories, but there are also other times when it all feels fake. Played over the long haul, Fallout 3 succeeds more than it fails, but there are still key areas where Bethesda could improve. 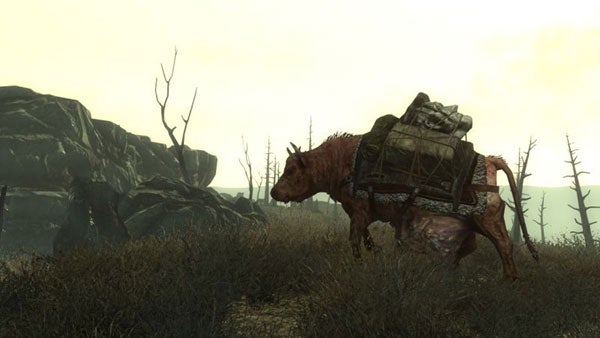 That said, this is an incredible game and easily the best RPG experience I’ve had since The Shivering Isles. Epic and majestic, Fallout 3 is going to disappoint anyone who comes in expecting a thinking man’s action game, but in a market saturated with action games, thoughtful or otherwise, it’s more important that it satisfies those looking for a deep and rich adventure. Many games get less impressive the more you play them, as the designers run out of ideas or the story just runs out of steam. Fallout 3 just seems to grow and grow. In fact, there’s really only one good reason not to buy Bethesda’s RPG: if you get it now, before Christmas, where on earth will you find the time or inclination to play anything else? 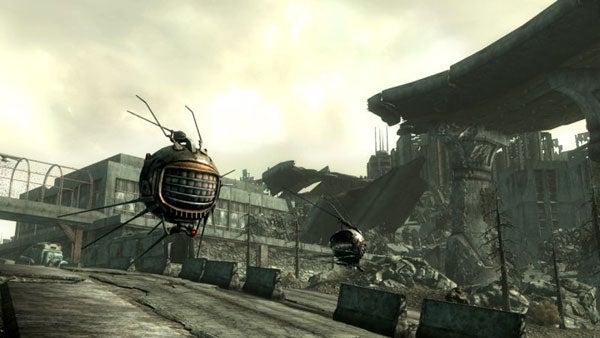 
Remember it’s a marathon, not a sprint, and Fallout 3 will open up its riches. While it’s not as immediately brilliant as Oblivion or Bioshock, it counters this with a strong atmosphere, an epic tale and deeper game mechanics than either.