Ever had an idea that seemed storming in your head but, when it came to actually putting it into practice, turned out to be a little bit of a damp squib?

In my case, you’re reading one such moment. In my mind, starting a review of a game that seemed like it should be a hectic and enthralling arcade style score chaser but proved to fall way short of all such potential, by summoning up the idea of something similarly enthralling in theory but limp in practice seemed like a corking idea. But, now that the words are on the page? Well, I’ll leave that up to you.

What I can do, however, is give you a well rounded take on Fallen – a colour matching action-puzzler delivered with much style, much grace, but very little spunk. Fallen, as you might have guessed from the name, is a game about falling objects – namely coloured balls, which drop from the top of the screen down through a pachinko-style table before falling onto a dial made up of three different coloured surfaces; red, blue and green. 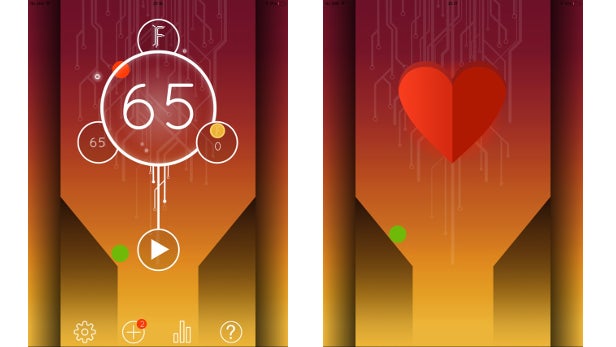 Your job is to spin that dial around so that the coloured balls and
coloured surfaces on the dial match up upon contact, all done simply by
touching two pads – one on the left of the screen and one on the right –
to rotate the disc in each direction. With only three lives on offer
(one scratched off every time you make a mis-match), the idea is to
survive for as long as you can, with each successful match up adding one
point to your tally.  Throw in some power ups – the ability to slow
down time, trigger invincibility and blast all balls nearby – that also
fall from the top of the screen and require a tap to activate, and
you’ve got the making of an enthralling score chaser.

Somehow, however, all these elements don’t quite fuse together. At first, it’s quite hard to work out why a game that seems like it should be a tidy little package never really finds its feet, though repeated play – and, more importantly, long successful runs without dying – begins to highlight Fallen’s main issue: pacing. To start with, balls fall way too slowly, doddering around in the middle of the board before finally falling onto the dial. At this point, any power ups that fall are somewhat surplus to requirements, but using them is a must given you can only hold one at any time.

Then, suddenly, play ramps up, and balls begin to fall almost in tandem, with the biggest challenge being to work out which balls will reach of the bottom of the screen first. Somewhat unfairly, this is often incredibly hard to do, with predicting what objects each ball will bash into on the way down an especially unscientific art. As a result, it’s entirely possible to go from coasting it through the first 20 balls to suddenly finding all your lives have gone in a matter of seconds within the next five.

It’s a muddled approach that undermines the whole experience. Because death often comes around almost out of the blue, you always feel you’ve been cheated out of a higher score. Even if you’re still motivated enough to try and best that score straight away, so slow are the opening moments that it’s hard to stay engaged long enough to see it through. The whole thing is utterly disjointed. 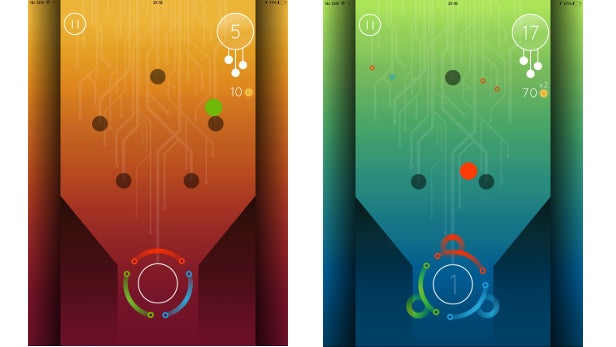 The good news is that, with a an update or two to address the pacing (or, rather, lack of it), Fallen is entirely savable. Things may not have gelled to date, but the basis of a good game is at the core of what’s been developed here. With a little tinkering, the idea of spinning that dial to meet the coloured balls on their way down the screen could prove in practice to be as simple and addictive as it sounds on paper. As Fallen is now, however, it all feels a little sparse, a little empty, a little jumbled.

For a game that promises so much both in terms of concept and in presentation, Fallen feels all the more flat because it never even gets close to reaching that potential. It all serves to prove that a simple idea isn’t necessarily that simple to get right.

Verdict
Fallen is the perfect example of a game with much promise but poor delivery. Poor pacing means that Fallen never really gets going, either delivering play that’s far too slow to be interesting or fast to the point of being unfair. An update or do could save this, but as things stand, it’s a bit of a non-event.