A smart doorbell that gets all of the basics right, the EZVIZ DP1's screen feels a bit underused and the app could be a bit more intuitive.

The Ring Door View might have been the first smart doorbell upgrade for an existing peephole that I’d heard of, but the first product I’ve got my hands on comes from a more surprising quarter in the shape of the EZViz DP1.

As with Ring’s product, the DP1 is designed to fit into your existing peephole, giving you a smart doorbell without needing any wires or having to drill any holes, making it suitable for use in apartment blocks or for renters.

It’s a fully teched-up product, too, with the inside housing a 4.3-inch touchscreen that lets you see what’s going on on the other side of your door. A high price and a few quirks get in the way, though.

Installation of the EZVIZ DP1 is a straightforward although a little fiddly. Once you’ve got your old peephole out, you have to feed the camera through the hole and clip the delicate connector into the touchscreen’s cable. You then screw the cable and camera together to hold everything in place. 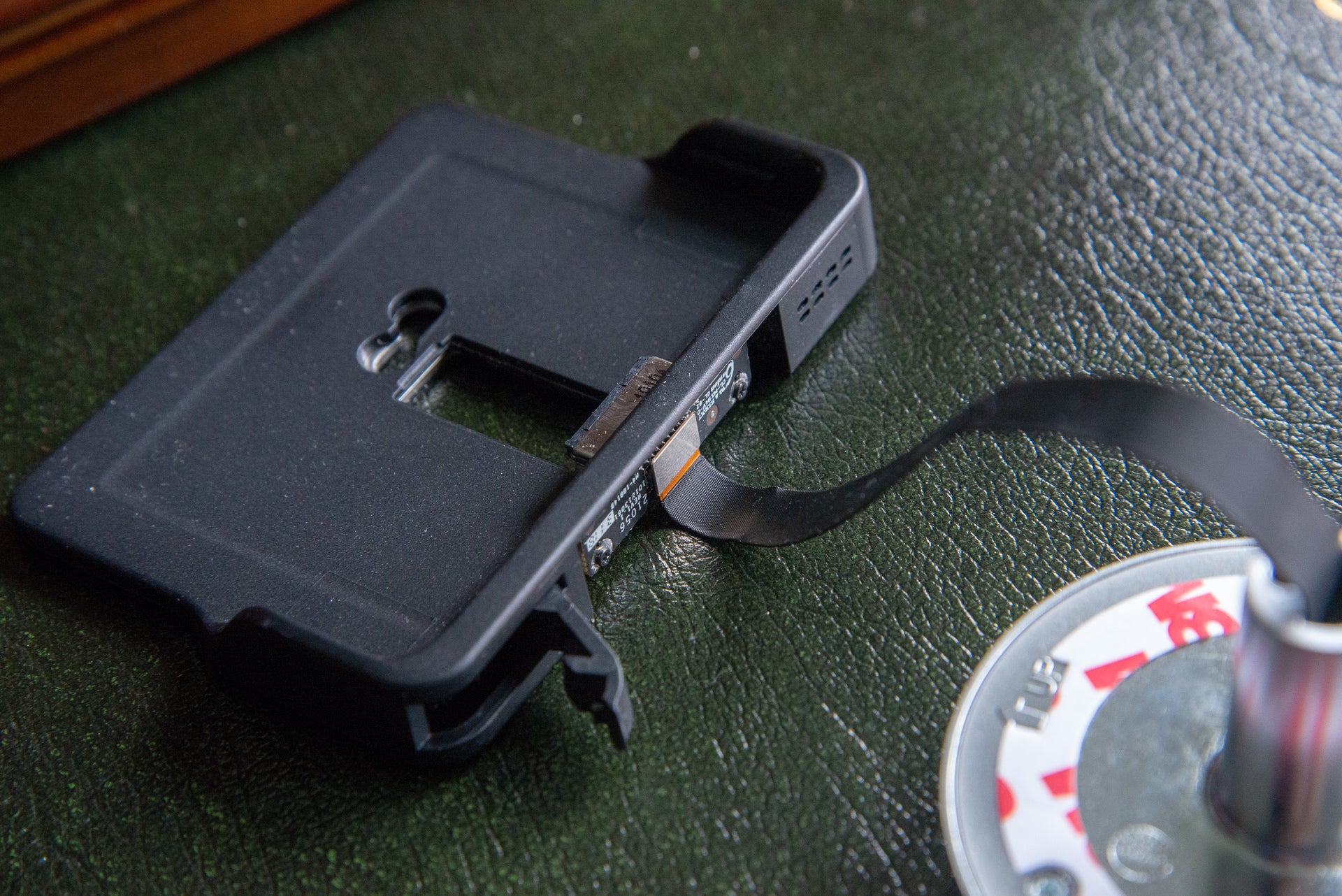 The cradle holds the screen and provides power to the doorbell

To get the camera working, you just have to charge the touchscreen via its micro USB port, then slide the screen into the cradle. The touchscreen then acts as the battery for the camera. When someone presses the bell button on the outside, the touchscreen rings out an internal chime.

As you move towards the door, a motion sensor on the screen picks you up and turns the screen on to show you who’s on the other side of the door. You can tap the buttons on the screen to record a video or take a snapshot but you can’t answer the call. Admittedly, at this range, you can shout through the door but it feels like a missed opportunity.

Given that the touchscreen sits right behind your door, there are few opportunities to use it. If it were wireless, and you could mount it somewhere else in your home, I’d say it was a useful accessory. Given the high price of the system, I’d rather pay less and, as with the Ring Door View Cam, have an optical lens to look through the door.

There were also a few times when the screen stopped responding, and I had to take it out the cradle, turn it off and back on in order to reboot the system.

TheEZVIZ DP1 gets the basics right with decent image quality

Once you’ve hooked theEZVIZ DP1 up to your Wi-Fi network and have the app installed, theEZVIZ DP1 gets most things right. Once someone presses the doorbell, the ring comes through via the app. It takes 30 seconds or so come through, which is similar to other doorbells that I’ve tested.

Cleverly, rather than sounding a single chime, your phone rings continuously. That’s a great idea and makes a doorbell ring easy to tell apart from a standard notification. You can then answer the call from your phone and see what’s going on. The stream defaults to the lowest resolution, but you can tap the Hi-Def button if you want to access the full 720p stream. 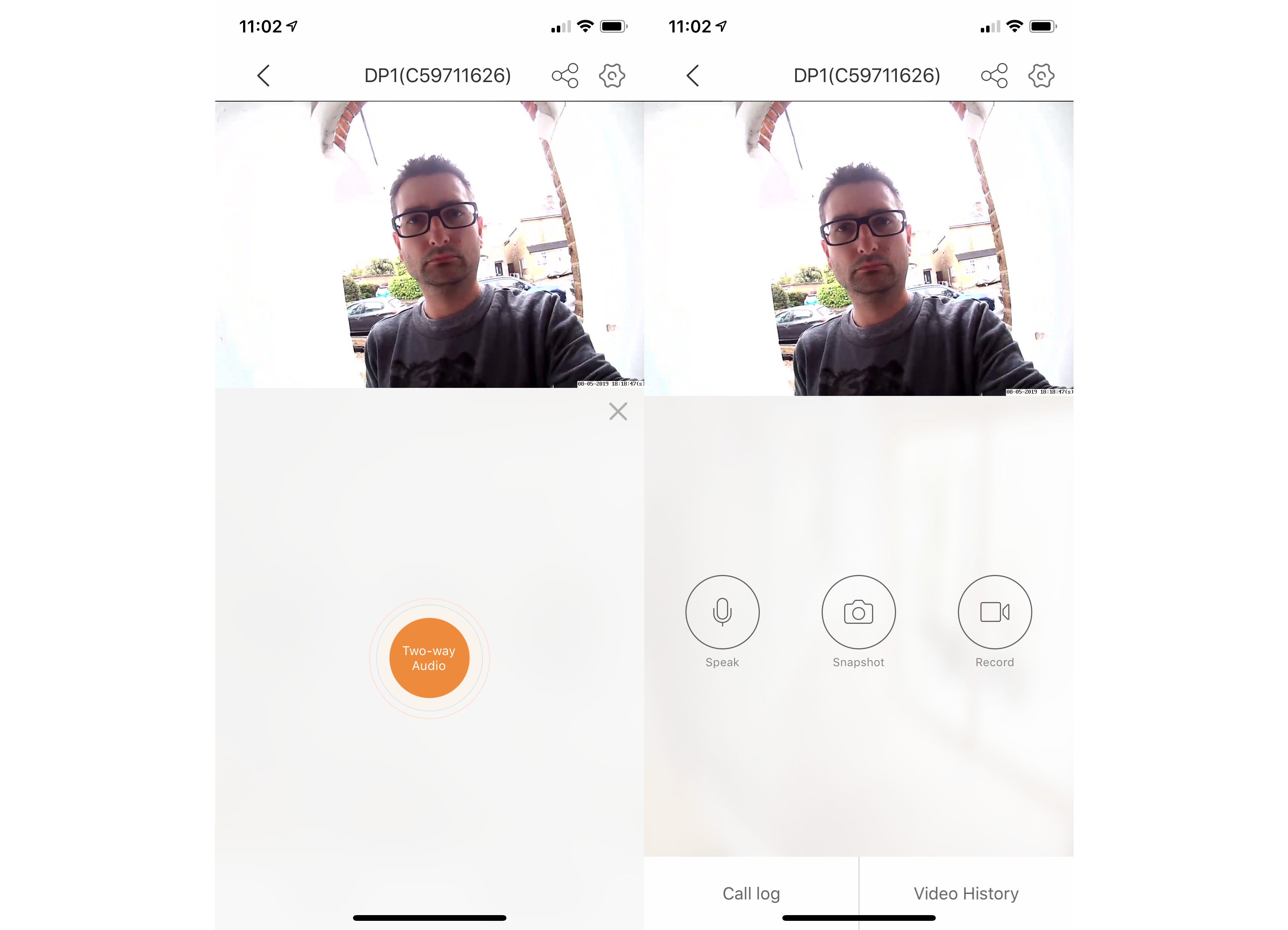 Image quality is pretty good, particularly as smart doorbells have one main advantage: the people you talk to will be standing right in front of the door, making it clearer to see what’s going on. During the day, the camera tends to blow out highlights, although it correctly exposes the people at the door. 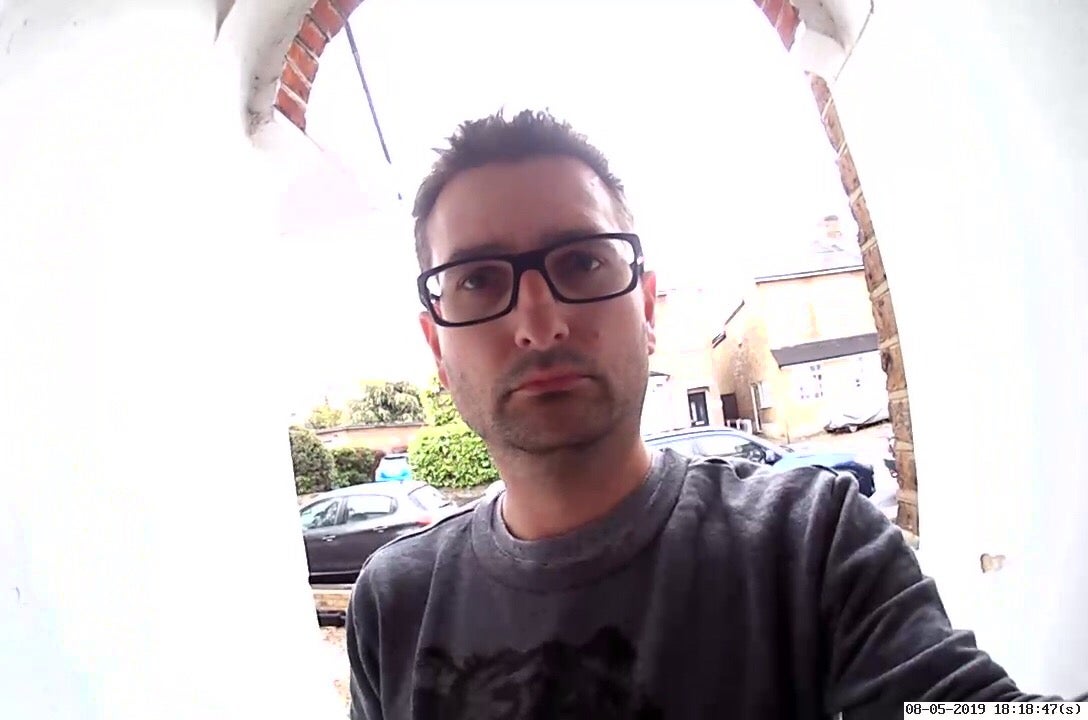 During daylight hours, the camera tends to lose some detail in the background, but the close-up view is good

At night, the IR lights come on. They tend to highlight the person in front but you lose depth in the image and can’t see what’s going in the background so much. 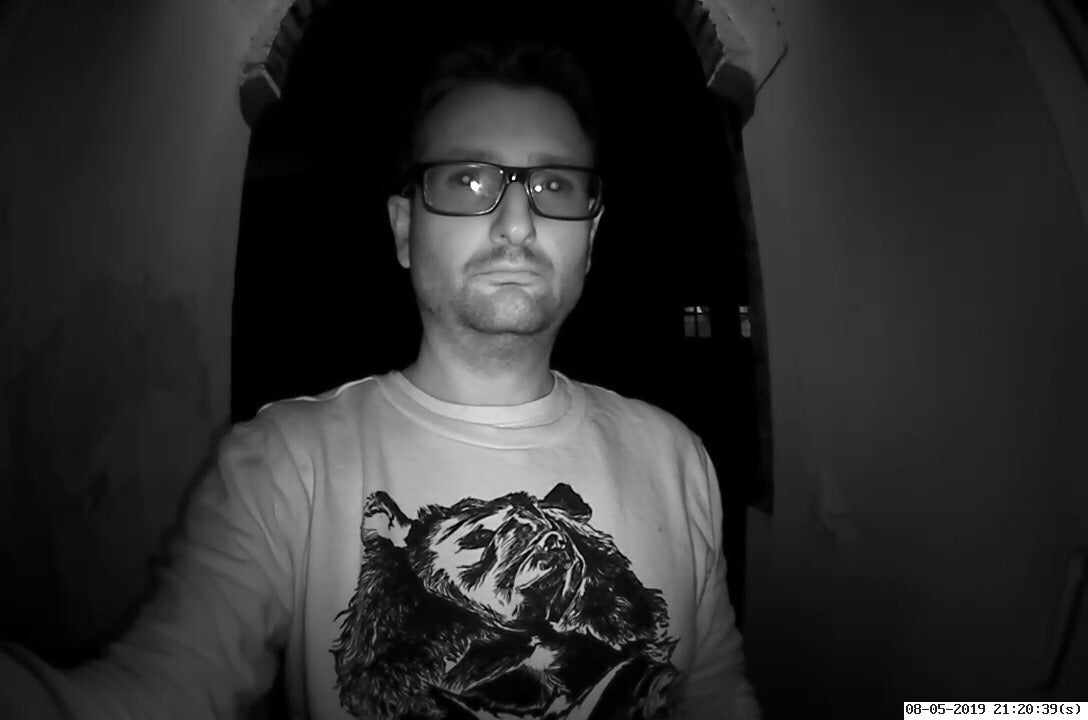 At night, the IR LEDs let you see who you’re talking to clearly

As well as acting as a smart doorbell, the EZVIZ will record motion when people approach your door thanks to its Human Detection capability, which looks for larger objects moving. Oddly, the app doesn’t let you adjust the sensitivity settings and you have to do this from the touchscreen. You can only adjust sensitivity, you can’t adjust the detection zones as you can on the Ring Video Doorbell 2. Depending on where your doorbell is placed, you may find that it’s set off by neighbours or people walking past your home. If motion detection gets too annoying, you can turn it off. You can’t, however, schedule when motion recording will be active.

Video is recorded to the cloud, with a free 30-day subscription thrown in. After that, you can pay £4.99 a month for 7-day video history or £49.99 per year. That’s as expensive as the Nest Aware 5-day subscription for the Nest Hello doorbell, which also gives you continuous recording. Alternatively, the DP1 can record to an SD card mounted into the screen.

Video is saved to your library, where you can select the day you want to view, with each event having a thumbnail. The interface looks a little basic but it’s functional. Video can be saved for use later, but is stored in a strange part of the app, where you then have to save it your phone’s photo album. 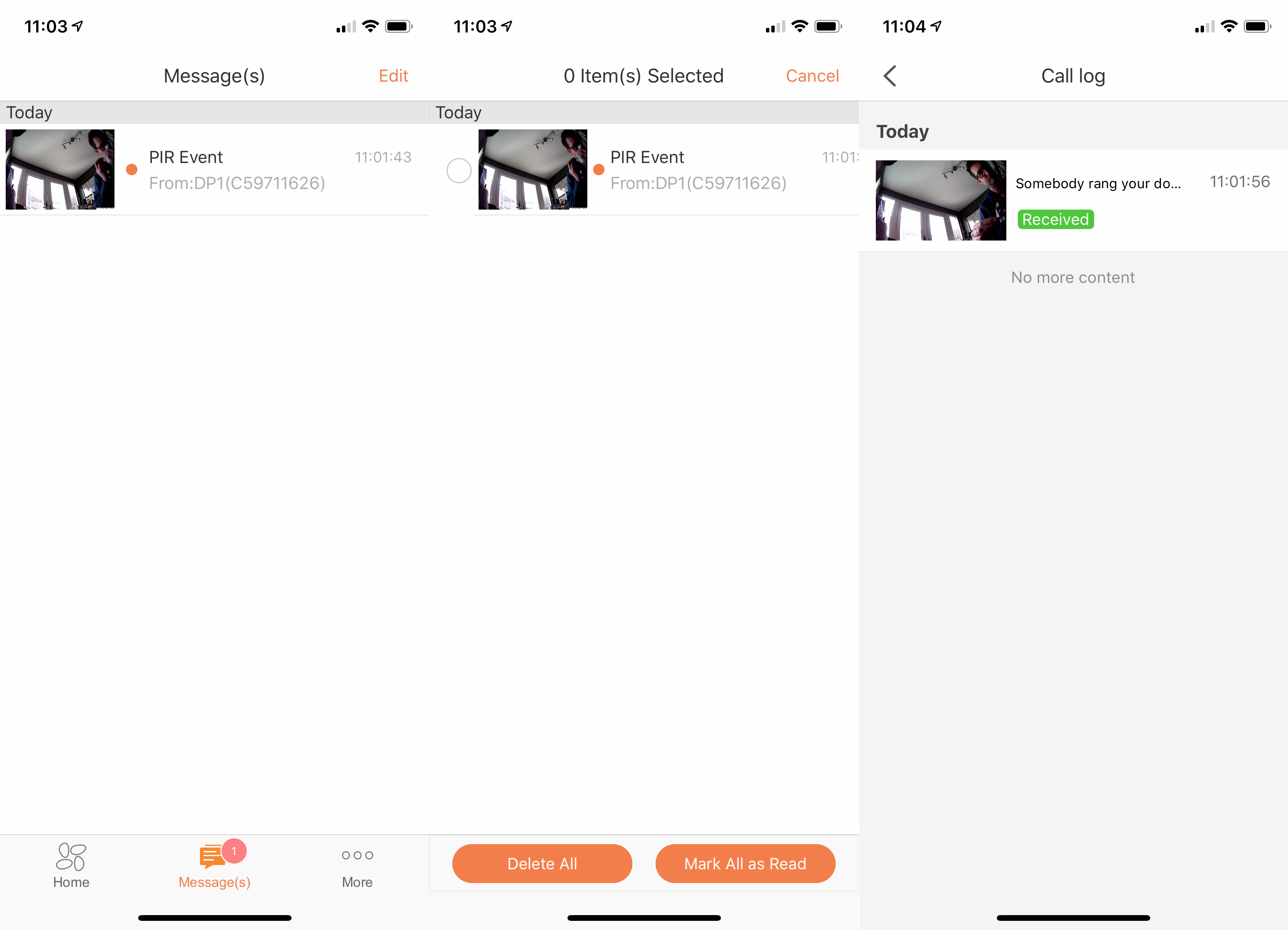 The app is a little basic, but it’s easy enough to filter events to find the one that you’re looking for

There’s an Amazon Alexa Skill, which lets you stream video from the camera to a compatible display, such as the Amazon Echo Show. There’s a similar Google Assistant Skill so that you can view the stream on a Google Home Hub.

Should I buy theEZVIZ DP1?

As a smart doorbell the EZVIZ DP1 gets most of the basics right, and I particularly like the way that it makes your phone ring, rather than using a notification sound. The touchscreen looks neat at first, but feels like a bit of a waste and just adds price to the unit: this model is more expensive than the Ring Door View Cam will be when it comes to the UK.

While the app is generally good, it’s a little clunky, and both the Ring Video Doorbell 2 and Nest Hello are that bit more polished, particularly when it comes to recording motion and letting you find the events that you want.