The neat E Ink screen makes the Eve Room easy to read, and its long battery life and small body means that you can place this air quality sensor where you want it. The low price will attract a lot of attention, as will the HomeKit integration, but coming with only basic sensors you don't get the full range of air quality information you get from rival products. Plus, the HomeKit integration only provides basic controls. You can create automatic rules based on air quality, but the implementation is fiddly and requires you to use the Eve app and the Apple Home app.

Our homes can be surprisingly dirty places, with the air in particular being home to dust, allergens, chemical pollutants and more. While one of units on our Best air purifiers can help keep your air clean, with an air quality sensor you’ll be able to determine exactly what’s in the air surrounding you. The Eve Room is a simple and easy-to-use air quality sensor that integrates with Apple HomeKit.

Its E Ink screen, small body and long battery life help it stand out from rival units, but it’s quite a simple device and more complicated actions require you to switch between two apps.

The Eve Room is easy to set up and use, but lacks the full data of other air quality monitors

Setting up the Eve Roomis easy, once you’ve charged it via the micro-USB port on its rear. After that, you can install the Eve app and connect the sensor to your phone via a Bluetooth connection. There’s a HomeKit code on the bottom of the device, which you can scan to add the Eve Room to your existing Apple Home setup, too.

Using Bluetooth helps save power, which is useful given that the Eve Room will run off of its internal battery. However, it means that you don’t get remote access unless you have a HomeKit hub installed within range. This can be a HomePod, iPad or an Apple TV.

The Eve Room is a basic air quality sensor. Its E Ink display shows you a star rating for air quality, and displays the current temperature and humidity levels. You can have all three on-screen at once, or you can tap hard – and I mean “hard” – on the cursors at the side of the display to show each setting individually. 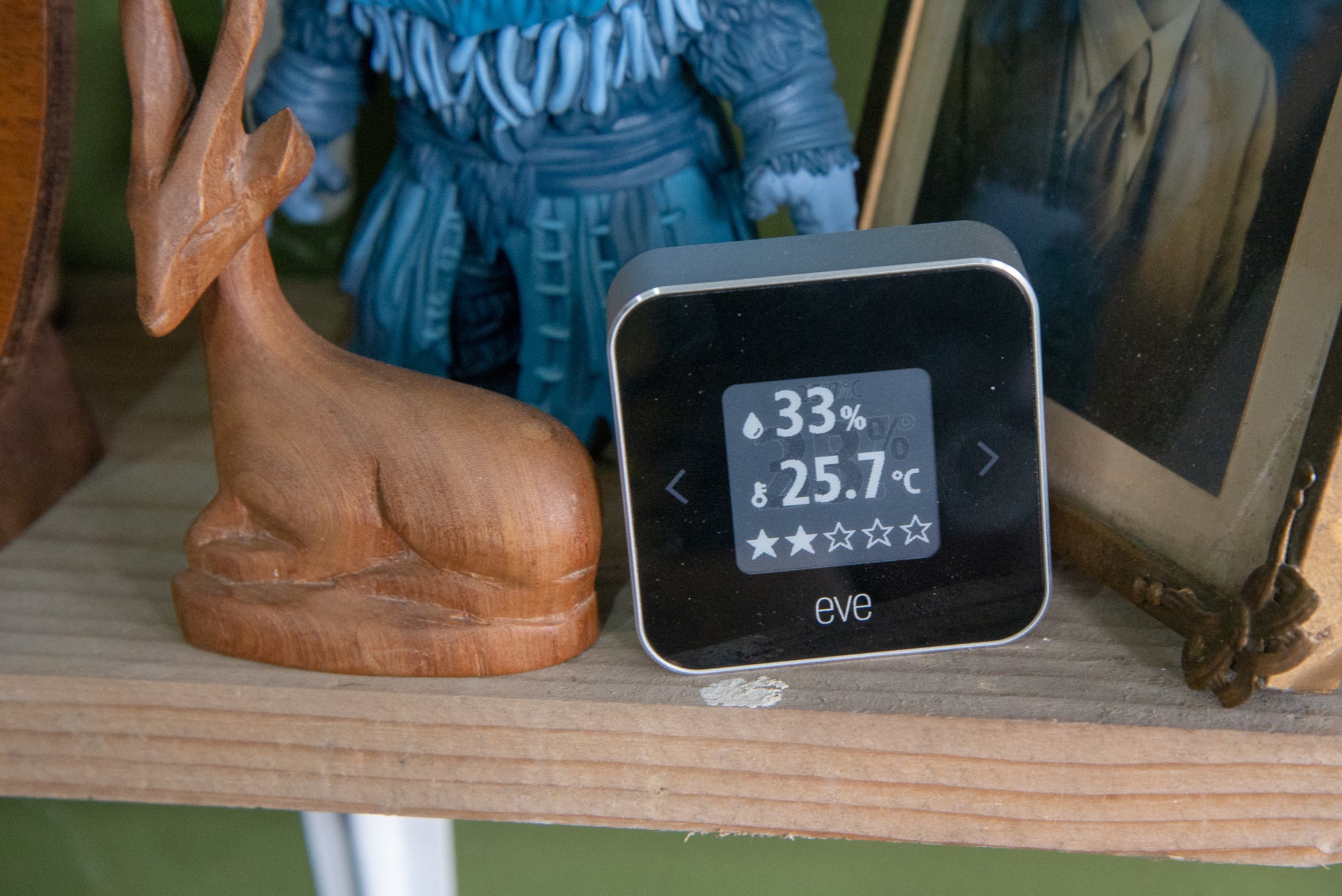 You can change the Eve Room’s display; this one, which shows temperature, humidity and air quality is the best

For each of the readings, you can view the current setting, plus a historical graph. Temperature readings were within one degree of my external temperature sensor, and humidity was within a couple of per cent. 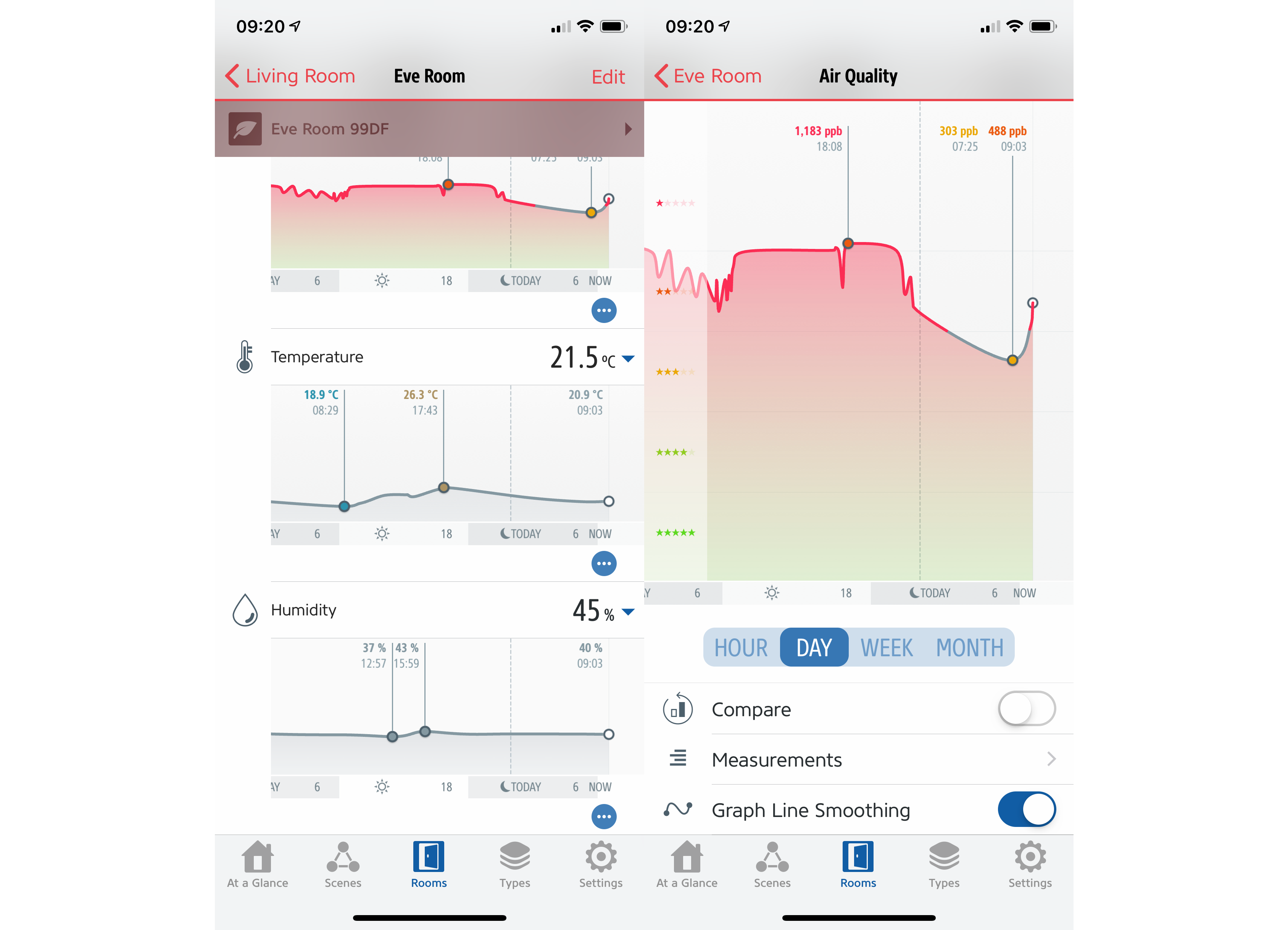 Air quality is measured through a VOC sensor; volatile organic compounds are typically found in everything from harsh cleaning products to old furniture, and they tend to increase in hot weather. There’s no particulate matter sensor in this model, nor a CO2 sensor. As such, the Eve Room doesn’t include the full array of sensors as the excellent Foobot Smart Indoor Air Monitor or the Awair 2nd Edition.

Using the Apple Home app gives you the basics only; you can’t drill down to see historical readings. You can ask Siri to give you the basics: air quality, temperature or humidity.

The Eve Room’s battery should last around six weeks. When the battery gets low, the sensor moves into a low-power mode, which only provides temperature and humidity readings.

You can automate tasks with the Eve Room, but the settings are fiddly and annoying

Rules lets you create a trigger condition, such as air quality dropping to three stars, or humidity exceeding 60%. You can set a condition, such as only running a Rule during the day. Finally, you set a Scene to run, as you can’t control devices individually. 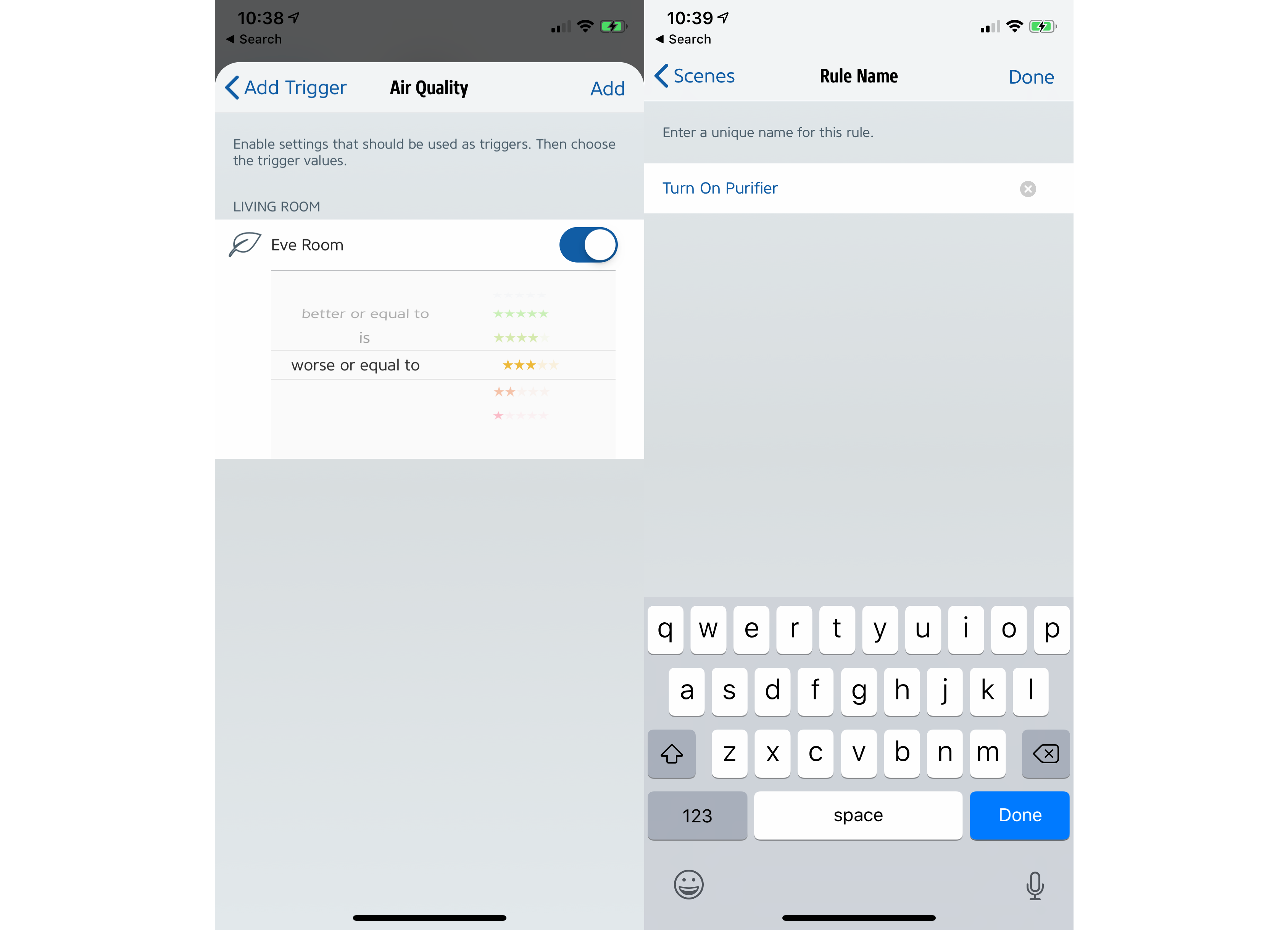 So far, so good, except Scenes have to be created and managed through the Apple Home app. For example, you could create a Scene that turns on a smart plug that turns on an air purifier, which you can then get the Eve home app to turn on automatically. Having to use two apps is quite a faff; it would be better if the options were in one place.

Why buy the Eve Room?

At less than £100, the Eve Room is one of the cheaper air monitors you can buy, plus it’s the only one that I’ve tested that integrate with Apple Home. This would be a more impressive feat if rules were easier to create, letting you automate your home based on the air quality.

Then there’s the issue that the Eve Room has a limited set of sensors. As a general guide to air quality, it provides the basic information – but opt for a more fully featured product such as the Awair 2nd Edition (now only £149) and you’ll get a far better insight into your indoor air quality.