We honestly never thought we’d find ourselves quoting Peter Sellers and Sophia Loren in a projector review. But it’s a simple fact that the first phrase that sprung into our heads as we started to watch Optoma’s HD33 projector was ‘Goodness gracious me’ – only without the, um, dubious Peter Sellers accent…

When you’ve tested as many TVs and projectors as we have, it’s actually quite unusual for a product to inspire such a feeling of surprise, nay shock. Especially when you’re talking – as we are here about a product that sits very much towards the bottom end of its market. But the HD33 really is, on some levels at least, a truly remarkable machine.

The key to this ‘remarkableness’ is its price. For despite costing under £1300, it delivers genuine, active, full HD 3D. Just to be ultra-clear about this, we’re talking about the full HD 3D pictures you can get from 3D Blu-rays, not just the 720-line 3D images Optoma delivers on cheap ‘3D Ready’ projectors aimed mostly at the PC market. 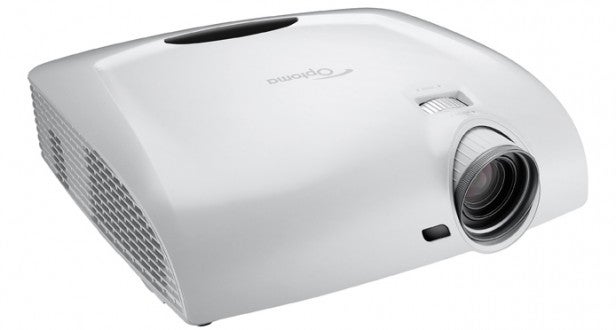 Incredibly, the HD33‘s £1250 price undercuts the previous cheapest full HD 3D projector we’d seen – the Optoma HD83 – by more than £1,000. So cheap is it, in fact, that it pretty much invents a new 3D projection category – and for now, at least, it’s a new category that it’s got all to itself. Meaning it could clean up if its performance is good enough.

The omens aren’t particularly good, though. For the HD83 turned out to be something of a disappointment as a 3D option, despite its much higher price. So common sense would suggest that the HD33 isn’t going to impress us either.

It’s clear right away, though, that the HD33 is no mere ‘strip down’ from the HD83, but a totally different model. It couldn’t look more different for a start. Gone is the startling bulk and scary black colour of the HD83, in is a much trimmer design with a perkier shape and a gloss white finish that looks cute as a bug when sat on a coffee table. In other words, the HD33 has clearly been designed from the ground up to appeal to a more casual, ‘living room’ market. 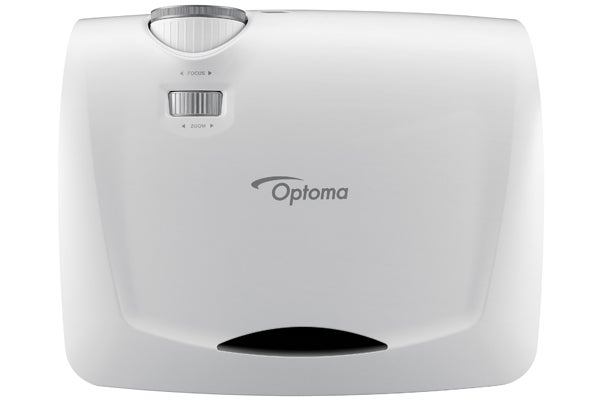 The only downside to the HD33’s design is the size of the vents down its sides – especially as these really do pump out considerable amounts of heat and even a small amount of light while the projector’s running.

On the upside, giving such a direct outlet to so much heat seems to help the HD33 to run passably quietly. But if you’re sat near to the projector’s sides you might find yourself feeling a bit clammy by the end of a film.

Such measurements tend to bear little relation to real-world performance, of course, but they are useful here to the extent that they suggest a fairly hefty shift with the HD33 towards brightness at the expense of black level response and contrast. 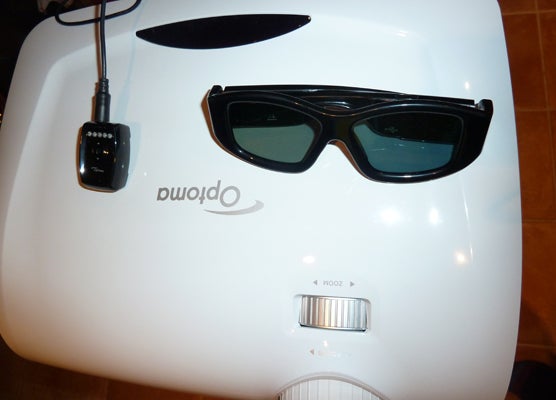 This wouldn’t normally count as a particularly promising trait if you’re a movie fan. But where 3D projection is concerned, if there’s one lesson we’ve learned from the HD83 it’s that brightness is crucial. Especially if you’re also working with the somewhat limited sort of contrast levels usually associated with the more affordable end of the projector market.

The HD33’s connections are more than acceptable for its money, including as they do a pair of 3D-friendly v1.4 HDMIs, a component video input, a composite video input, and even 12V trigger and RS-232 control ports to aid system integration.

Plus there’s the DIN port now familiar from the HD83, to which you have to attach Optoma’s external 3D transmitter. This transmitter is shipped free with the projector – along with a single pair of Optoma’s latest 3D glasses – and is unusual in that it delivers its sync information to the glasses using RF rather than IR technology. This proves to be a pretty brilliant move, as the sync signal didn’t lose connection with the glasses even once during our tests.

Setting the HD33 up immediately exposes a pretty large if probably predictable shortcoming: no vertical image shifting. This predictably makes getting the image in the right place on your screen quite difficult without using keystone correction (something we would never recommend that you do given that this is essentially ‘distorting’ the native image resolution).

The HD33 does offer a degree of optical zoom via a simple circle around the lens, but it’s fairly limited, which again could create an installation issue or two.

There’s also greyscale management via a white balance control, and adjustments for the projector’s gamma, colour temperature and colour space settings. This is all very satisfactory on such an aggressively priced 3D projector. 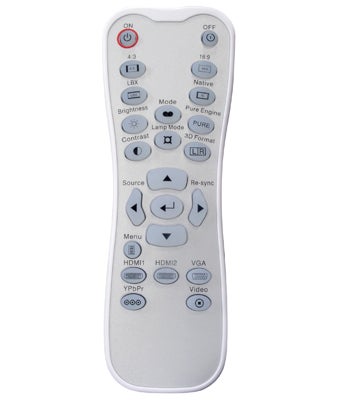 As noted earlier, our experience with the HD83 meant we didn’t really expect much from its far cheaper sibling. But we couldn’t have been more wrong, as it happens – at least where 3D is concerned.

Within just moments of settling in to watch a series of our favourite 3D test scenes, it was obvious that the HD33 isn’t just as good as the HD83 with 3D, it’s actually better. A lot better.

The straightforward reason for this is that its brightness/contrast balance is much more suited to reproducing active 3D images, with the extra emphasis on brightness allowing the image to retain detail and, thus, depth in dark scenes, despite the dimming effect of the glasses. With the HD83 by comparison, dark scenes routinely seemed almost completely devoid of shadow detail, and thus flat and unconvincing.

The extra brightness also allows the HD33 to deliver a little more colour ‘pop’ in 3D mode, which is again important given how much active shutter glasses can dent colour vibrancy, especially with projectors.

The trade off for the HD33’s much stronger reproduction of dark scenes in 3D and richer 3D colours is that there’s a slightly greyer look to the darkest corners of pictures than you get with the HD83. The HD33‘s full HD 3D images also look a touch softer than those of the HD83. But so far as we’re concerned, overall the HD33’s 3D ‘balancing act’ is much more watchable and engaging.

Especially as the HD33 has another remarkable ace up its sleeve in the shape of its resistance to crosstalk noise. The dreaded double ghosting noise problem crops up only rarely here, and even when you do see it its impact is generally subtle. This is a truly outstanding achievement on such an affordable projector, humbling the crosstalk efforts of many 3D projectors costing far, far more.

It could be argued, we guess, that there’s also a price to pay for the HD33’s 3D performance with its 2D performance. Certainly the brightness that serves 3D so well can leave dark 2D scenes looking washed out and grey compared with how dark 2D scenes look on the HD83. Also, if you don’t calm the brightness down a bit it can cause you to see more rainbow effect (where stripes of red, green and blue momentarily flash up over very bright image elements).

However, we actually found we still ultimately preferred the HD33’s 2D black levels, as at least they manage to deliver a degree of shadow detail that the HD83 seemed to struggle with. Also, in reality the rainbowing is pretty restrained for such a phenomenally cheap projector, only really becoming distracting when you’re watching particularly stark bits of black and white, such as our constantly used Casino Royale pre-credits sequence.

The HD33’s motion handling is again more assured than expected for such a cheap projector, with acceptable judder levels, minimal motion blur, and seemingly none of the dotting noise you sometimes get with motion on cheap DLP projectors. You can remove judder almost completely if you wish via the PureMotion tool, but we doubt many people will find that this delivers a natural look for films.

The HD33 is decently sharp with HD sources too (though some of Epson’s similarly priced 2D LCD models look a little sharper), and colours are both more expressive with their range and more natural than we would have anticipated. The worst that can be said is that we had to calibrate around a slight yellow dominance with 2D and a slight green dominance with 3D, but the HD33 just about has enough colour tools to make this possible.

Verdict
There’s no denying that the HD33’s 2D pictures lack some of the refinement you’d expect to see with more expensive DLP projectors – including Optoma’s own HD83, notwithstanding that model’s curious shadow detailing issues. Considered fairly, though, in its context of being by a country mile the cheapest full HD 3D projector yet launched in the UK to date, the HD33 is actually such unexpectedly good fun to watch – especially with 3D – that it’s almost silly.