The TW570 is a new budget LCD projector targeted at gamers and home cinema enthusiasts. It supports 3D as well as 2D playback, carries a built-in audio system, and delivers an HD Ready (not Full HD) resolution of 1280 x 800. Its 3000 Lumens of light output makes it the brightest home cinema projector in Epson’s range, too. And it’s on sale for just over £470 at the time of writing.

At just 297mm wide by 234mm deep and standing just 77mm tall the TW570 takes up impressively little space on a coffee table. Yet it manages to cram a little style into its small surface area thanks to its glossy black finish and cutely rounded edges and corners. 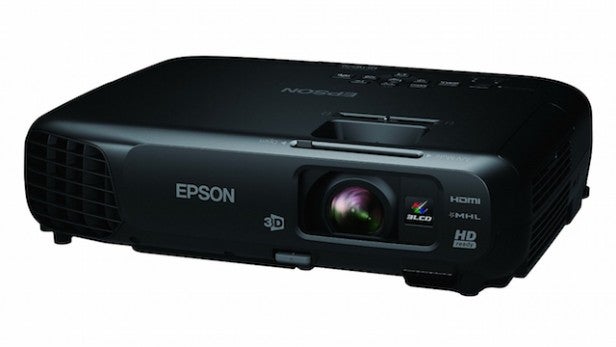 It’s nice to find the small lens protected by a sliding door, too, while the necessary zoom and focus ring plus a keystone ‘slider’ are all integrated quite tidily onto the projector’s top edge.

Connectivity is unusual for a home projector, in that it only includes one HDMI port but lots more multimedia options than you’d typically find. These multimedia options include a D-Sub computer port, a USB-B port for an alternative computer connection method, a USB-A port through which you can play photos off USB storage devices, and even optional wireless network support via a (not supplied) USB dongle.

Install the LAN USB and you’ll be able to stream photos into the projector from your smartphone or tablet computer wirelessly via the Epson iProjection app. If you can’t be bothered to get the wi-fi upgrade, then the TW570’s HDMI socket is equipped with MHL support for direct phone/tablet media playback.

While some of this multimedia support is welcome enough in a modern home environment though, we can’t help but feel the connectivity balance overall feels biassed towards data rather than home entertainment uses. Especially the provision of just one HDMI. Hmm.

Now we come to think of it, the TW570’s pretty extreme 3000 Lumens maximum colour light output is also potentially more suited to data than gaming/movie uses. Though having said that, while we’d always recommend using a projector in a blacked out room we do realise that it’s not always easy or even possible for a typical household to achieve total darkness in their projection room, in which case the sort of brightness claimed by the TW570 could come in handy. 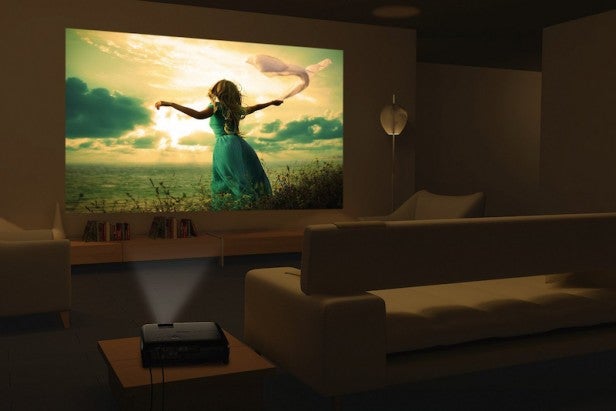 At least the high brightness figure is joined by a reasonably promising 15000:1 contrast ratio – though this isn’t a native ratio, but rather one achieved with the help of a dynamic iris system that adjusts the amount of light emerging from the projector to best suit the images being shown.

Finding a dynamic iris on a projector as cheap as the TW570 is actually quite impressive – alhough we’ll be on the lookout for over-obvious brightness shifts when putting the TW570 through its paces.

The most obvious sign of the TW570’s affordability comes from its resolution, which delivers an HD Ready 1280 x 800 pixels rather than the Full HD 1920 x 1080 we’re becoming increasingly used to seeing, even on very cheap projectors.

As well as meaning that the vast majority of the UK’s 1920 x 1080 HD sources will have to be ‘downgraded’ to the projector’s lower resolution, the TW570’s 1280 x 800 pixel count doesn’t provide a native 16:9 aspect ratio. Instead it equates to 16:10 – a ratio which, again, fits better with computer/data use than home entertainment.

The TW570 does thankfully present 16:9 video at the correct ratio rather than automatically stretching it a little vertically as happens with one or two native 16:10 projectors and screens we’ve tested over the years. But it still irks that you’re not getting the full benefit of the pixels you’ve paid for, and if you’ve got a 16:9 projection screen you’ll also feel annoyed by the way the image spills over the screen’s top and bottom edges.

The TW570 supports 3D playback using the active system – though no 3D glasses are included free with the projector, with each pair you want setting you back around £70. Which has to be considered quite an extra investment on a £470 projector.

Other features of note are the provision of two stages of noise reduction processing; Eco and Normal lamp modes (with the Eco one dropping the light output to 2100 Lumens); a built-in 2W speaker system; an unusual but actually quite useful split screen feature enabling you to watch two different inputs simultaneously; and a Turbo mode designed to reduce input lag when gaming.

The TW570 is passably well equipped with setup features. Where the job of physically getting your image in the right place on your wall or screen is concerned, there’s a small amount (x1.2) of optical zoom, and the zoom and focus wheels accessed through a window on the projector’s top edge both move smoothly and respond accurately to your adjustments.

The keystone ‘slider’ at the projector’s front edge is handy too, enabling you to get the edges of your images perpendicular if, as is likely, you find yourself positioning the projector above or below the ideal position of the images on your wall or screen, or even off to the side. Though strangely the horizontal keystone correction is deactivated if you use the Turbo game mode.

There are also dropdown legs to adjust the height and angle of the TW570’s projection, with the only significant downer being the lack of a vertical image shift tool that might have helped you avoid the keystone adjustment. After all, while the keystone ‘slider’ works well enough, as with all keystone mechanisms it is in reality merely distorting the image’s shape, potentially reducing image clarity in the process.

Our main guidance over these modes would be that you should use the Cinema setting in a darkened room and the Living Room setting in a bright room, that you leave the noise reduction turned off, that you check the aspect ratio is set to 16:9 with Overscanning off for video playback, and that you engage the Turbo mode while gaming.

If you’re finding the projector’s cooling noise disturbing, make sure the lamp mode is set to Eco rather than Normal, as this improves things considerably.