The TW570 is actually much more enjoyable to watch in 3D than it is in 2D. The inevitable darkening effect of the active shutter glasses does a good job of hiding the greyness over dark areas so apparent in 2D mode, which also makes colours look more convincing and nuanced.

Since the active 3D system is being used there seems to be as much detail in 3D pictures as there is in 2D ones, too, and it’s great to find the clarity only being reduced by relatively minor amounts of crosstalk ghosting noise versus some LCD-based 3D projectors we’ve seen.

The sense of depth in the 3D frame isn’t as profound as it is on projectors capable of producing a wider contrast range, but overall we had much more fun watching 3D than we felt we had a right to for £470. Especially considering how much 3D benefits from being watched at the sort of screen sizes only a projector can deliver.

With only 2W of audio power to play with we hadn’t expected much from the TW580’s sound system. But actually it’s not too bad. There’s precious little bass to speak of, but voices sound clear, there’s plenty of detail to be heard, and the sound projects surprisingly well beyond the confines of the projector’s tiny chassis without causing the speakers to distort.

Maximum volume levels are pretty limited though, and there’s also the inevitable sense that the sound is coming from somewhere distant from the onscreen action – a dislocating effect not helped by the fact that we sometimes became aware of a slight loss of synchronisation between the video and audio tracks.

Also worth noting here is that Epson claims the TW570’s lamp should be good for 5000-6000 hours of life – almost double the life quoted for typical budget projection lamps. 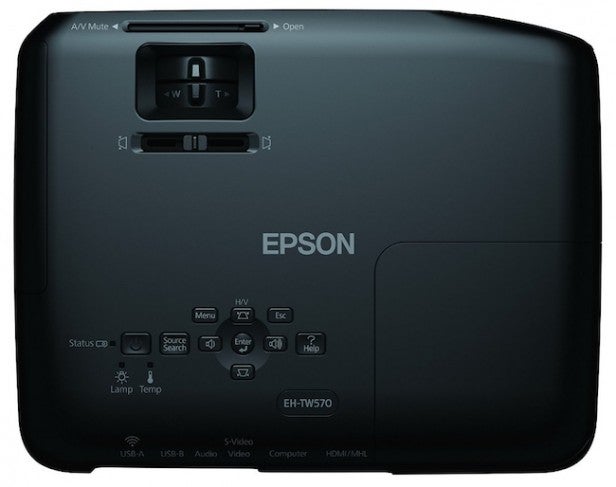 Where running noise is concerned, the TW570 is a bit on the loud side. With its lamp running at full power the racket gets up to a genuinely distracting 37dB, and even in Eco mode there’s enough cooling noise to mean you won’t want to sit very close to it.

Gamers attracted by the TW570’s price and who can look past its contrast limitations will be pleased to hear that we recorded its input lag at just 33ms once we’d engaged the Turbo mode. This is a good result by projector standards, and should mean you can’t really blame the projector for too many Call Of Duty deaths.

The short answer to this is that you probably shouldn’t unless you’re looking for a data projector first with home entertainment running a distant second on your priority list. For home cinema uses we think you’ll find a BenQ DLP model such as the W1070+ or W1080ST+ much more satisfying.

One of our pet peeves is when a brand tries to pass what’s essentially a data projector off as a home cinema projector. Unfortunately this seems to be exactly what Epson’s done with the TW570. Not the bargain it appeared.