Slim is most definitely in when it comes to the EchoStar HDT-610R, as this is the thinnest Freeview HD PVR that we’ve ever clapped eyes on. In fact, EchoStar says that it’s the world’s slimmest TV recorder, a claim that we don’t doubt is true.

Taking the HDT-610R out of the box its slim dimensions make it really quite a striking machine to look at. Essentially, it’s the Macbook Air of the PVR world, as it stands just 14.6mm tall, which is slimmer than a Blu-ray case. However, because the chassis is made out of metal it actually feels very robust. It’s perhaps not as showy as it could have been, as the matt black finish is a tad understated, but its sheer slimness certainly makes it stand out from the crowd. To keep the chassis as slim as possible EchoStar has used an external power supply, but even this is relatively small and compact.

EchoStar has embossed its logo in silver on the top of the unit, while the left hand side of the front edge has the Freeview HD, HDMI and Dolby Digital logos. The middle is home to the IR receiver window while the right hand side has a single blue status LED to show when the unit is on or in standby, and next to this there’s the power button.

Take a peek around the back and you’ll be surprised by the number of ports EchoStar has managed to squeeze into the limited space available. There’s both an RF input and output, so you can loop an aerial through to the unit’s tuners and then back out to your TV’s tuner.

Next to this there’s a mini-jack plug for the optical out, but EchoStar also provides an adaptor in the box so you can use this port with a standard optical cable. Naturally there’s HDMI output to feed pictures to your TV and an Ethernet port for connecting the PVR up to your home network to enable the smart TV features. 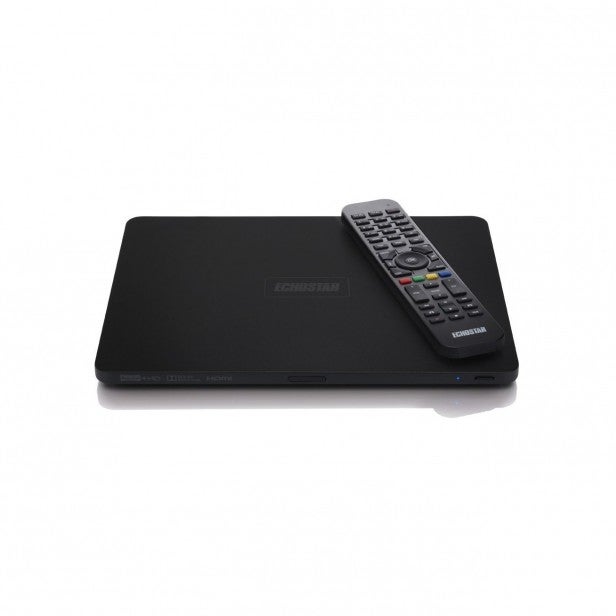 Sadly, the recorder doesn’t have Wi-Fi, so going cable-free isn’t an option. There are also two USB ports here as well as an IR input for an optional IR receiver. Unlike a lot of manufacturers, EchoStar provides both HDMI and Ethernet cables in the box to get you started, which is to be applauded.

Echoing the design of the main unit, the supplied remote control is also very slim. Thankfully it has full sized buttons that are responsive, but feel a little bit hard under your fingers. The layout is excellent though, with the buttons for the main features you’re likely to use most often, such as the recordings library and EPG, all within easy reach. We also like that EchoStar has added extra buttons to the remote for controlling your TV, and you can program it to work with different makes and models using the codes found in the back of the manual.

Setting up the EchoStar HDT-610R doesn’t take too long, but it was quite slow at tuning channels — much slower than the Panasonic DMR-HW120 that we looked at recently. However, you only really have to tune all the channels once, so this isn’t going to be an issue longer term when you’re using the recorder.

Thankfully the menu system is very straightforward and easy to use, and it’s nicely presented too. Press the menu button on the remote and it calls up a column on the left hand side of the screen that contains colours full icons for the programming guide, favourite channels, Recordings library, apps and settings. 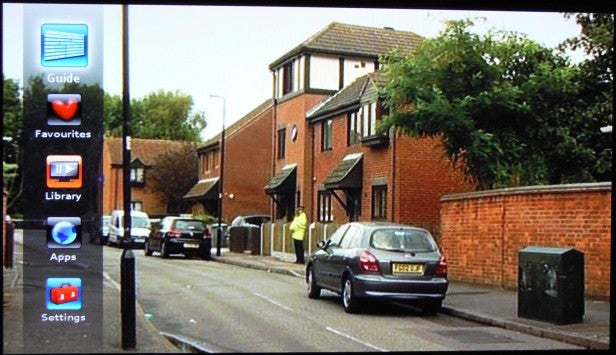 The programming guide is quite well designed too. It overlays on top of the channel you’re watching so you don’t lose audio and video when you call it up. It’s neatly laid-out and shows eight channels’ worth of data at a time with a summary box as well as a banner showing you how much of the currently selected program is left to play out.

Scheduling a recording couldn’t be much easier as you just select the show in the guide and then press the record button on the remote. If the show is part of a series you’re given the option to record all the episodes in the series and if there are any clashes with existing timers the PVR will tell you as soon as you try to add a new timer. However, there doesn’t seem to be a way to pad out recordings, say to add a couple of minutes to the start and end of a timer in case a program over runs or starts slightly early. 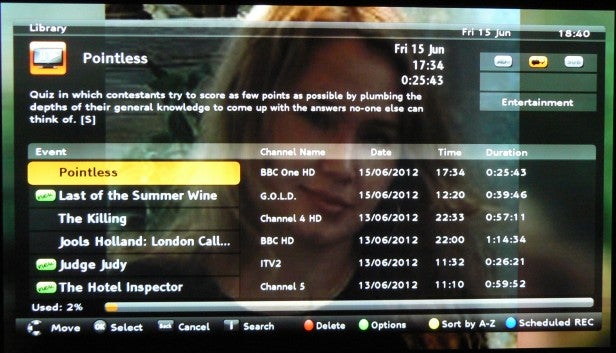 Recordings appear in the library and unwatched shows are marked with a new flag which helps you keep track of which shows in a series you’ve watched and which ones you are yet to view. The library screen also lets you view the recording timers that you have set-up.

As this is a twin tuner PVR it can record two channels at the same time or allow you to watch one channel while recording another. It supports chase play too, so you can watch the start of the program while the end is still recording.

The playback controls are nice and responsive and you can fast forward or rewind programs at speeds from 2x up to 64x. You can also jump in one minute blocks by hitting the right or left buttons on the remote’s central D-pad.

The PVR constantly buffers the current channel you’re watching to disk, so you can rewind up to one hour’s worth of play time whenever you want. You can, for course, also pause live TV and again it’ll buffer this for up to one hour. The 500GB hard drive is large enough to store up to 300 hours of standard definition programming or 125 hours of HD shows. 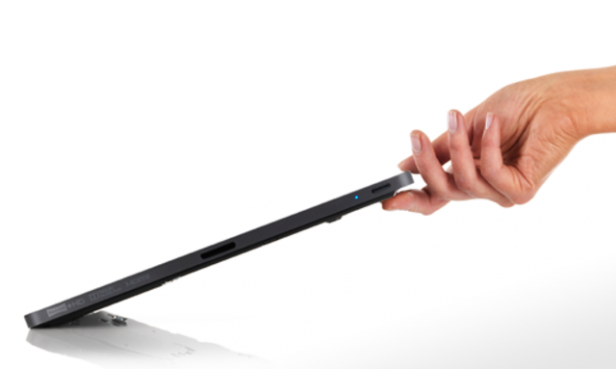 Unfortunately our review unit didn’t have the smart TV features enabled on it yet. However, EchoStar says that it will support the BBC’s iPlayer service as well as BoxOffice 365 premium movie and TV rental service with more services to be added in the future.

Also, for quite an expensive PVR, it lacks some of the more advanced features you’ll find on rival Freeview HD models. For example, despite the presence of the two USB ports it doesn’t allow you to play back digital media files from memory keys or hard drives plugged into these ports. They only seem to be there for performing manual software updates. It also doesn’t support streaming media over a network and unlike a lot of the recorders PVR from big name brands like Panasonic it doesn’t allow you to share the recording library across a network with other TVs or media streamers.

Verdict
The EchoStar HDT-610R’s slimness really is very impressive and we also like it’s easy to use interface and good recording features. However, it’s quite an expensive PVR for a 500GB model and it lacks some of the more advanced features that you now find on Freeview PVRs from the likes of Panasonic and Samsung.