I wouldn’t recommend Iron Rain over Earth Defense Force 5, since it fails to deliver the distilled, charming experience I adore from the Sandlot series

I’m so glad I share Japan’s obsession with giant monsters. There’s nothing better than watching otherworldly kaiju tear through everything in their wake, whether it be citizens, buildings or the Earth Defense Force – an elite group of soldiers tasked with protecting our planet from alien threats.

For years, the EDF series has taken pride in one thing: obliterating alien bugs with an increasingly wacky array of weapons and mechs. It’s a grand old time, and Iron Rain evolves the formula in some unexpected ways, although sometimes falters under its own weight.

But that doesn’t stop Earth Defense Force: Iron Rain from being an enjoyable romp, using charm and cheese to trample through its inconsistency. 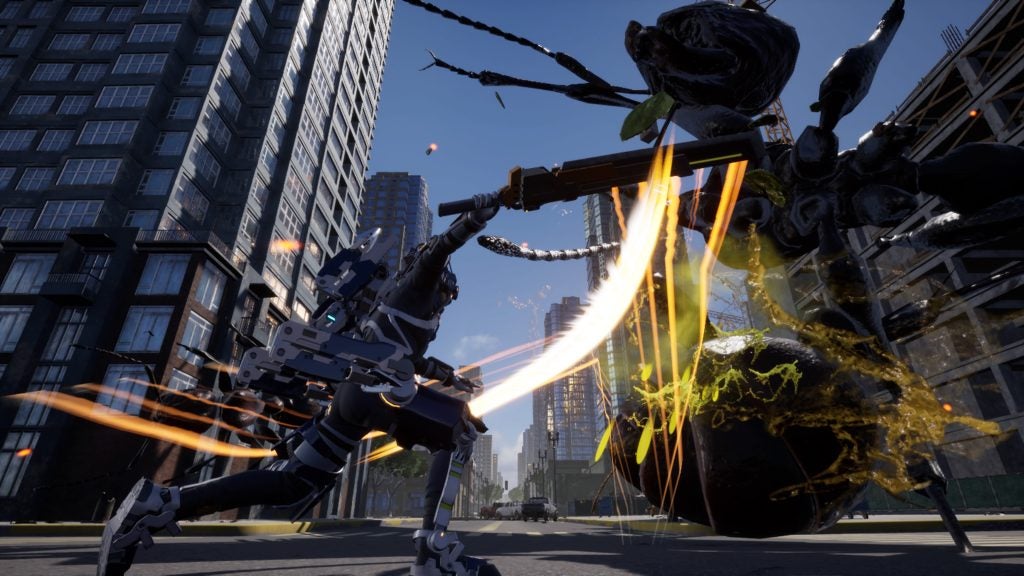 This is the first Earth Defense Force title to be developed by Yuke’s, a Japanese studio otherwise known for 2K’s WWE series. Sandlot is normally responsible for the series, delivering tongue-in-cheek escapades across the world as alien invaders seek to destroy humanity. It’s a laughably simple premise, but what’s surprising is how much changes in Yuke’s iteration.

For starters, Iron Rain is far darker in tone, aiming for a semi-realistic aesthetic as giant insects are covered in grotesque detail. I’m an immense arachnophobe, but thankfully had a rocket launcher handy to fend them off. This vastly different aesthetic is a welcome change, presenting EDF through a different light. It’s like Godzilla meets Black Hawk Down with a sprinkling of Naked Gun.

The solo campaign begins amidst the beginning of an alien invasion. Robotic mechs and all manner of creepy crawlies descend on the planet determined to take over. They succeed, and we’re suddenly transported several years into the future. Here is when things truly begin as the Earth Defense Force seeks to take their home back and rebuild. Obviously, it’s not that easy.

Rebellions have formed, trying to harvest alien technology and tame the alien creatures for themselves. This is a neat twist on the EDF formula, pitting you against humanoid mechs for the first time. It’s a lovely bit of a variety in a series that has often lacked it, although don’t go expecting an enthralling narrative. It’s cheesy and undeniably aware of that fact. 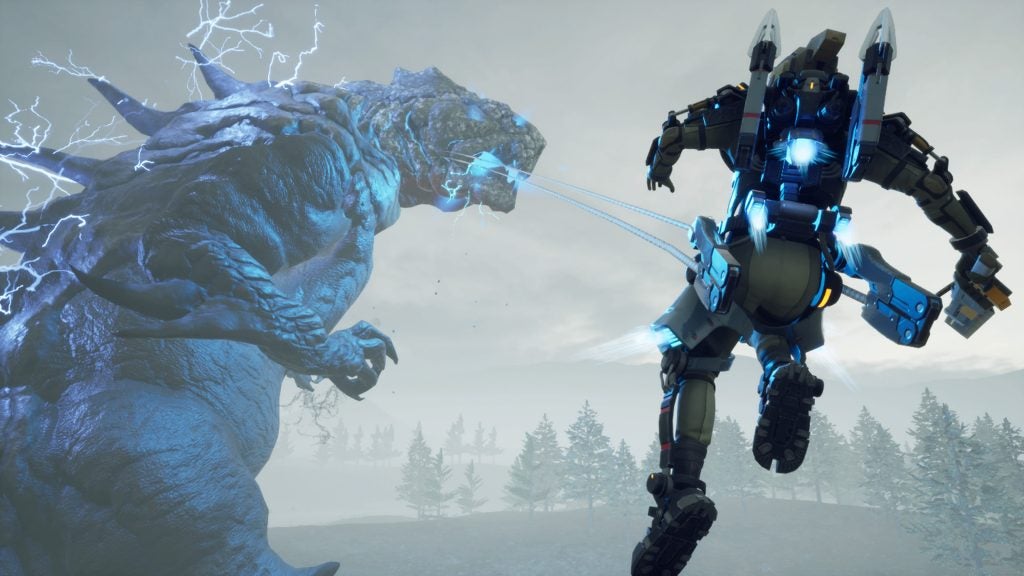 Things start off pretty weak: you’re roaming bland environments with little more than an assault rifle and a bland infantry class. However, following a few missions, Iron Rain embraces everything I love about the series’ wacky nature. You have a selection of classes to choose from such as the Jet Lifter, Heavy Striker and Prowl Lifter.

Donning a jetpack, the Jet Lifter can propel themselves into the air, opening fire from above as jumping spiders try desperately to pull you down. Prowl Lifters can command insects themselves, jumping on the back of scorpions and ants, all with their own special moves. There’s so much on offer that it’s often a joy just to replay older missions with a renewed arsenal.

The inconsistent performance issues and sometimes unwieldy controls are demonstrably clear when you’re not busy causing all sorts of goofy chaos. Despite a patch ahead of release, I still found much of Iron Rain to be mediocre on a technical level, the frame rate simply unable to cope with the speed  you’re expected to manoeuvre. As enemies fill the screen, turning the camera can transform the action into a distracting blur of nonsense. Running on a PS4 Pro, it wasn’t up to scratch.

Iron Rain also doesn’t impress visually, locales reminiscent of an early PS3 game. Creature designs make an impression with bright and energetic designs. They’re also startlingly realistic, so arachnophobes and those with a fear of creepy crawlies need not apply. 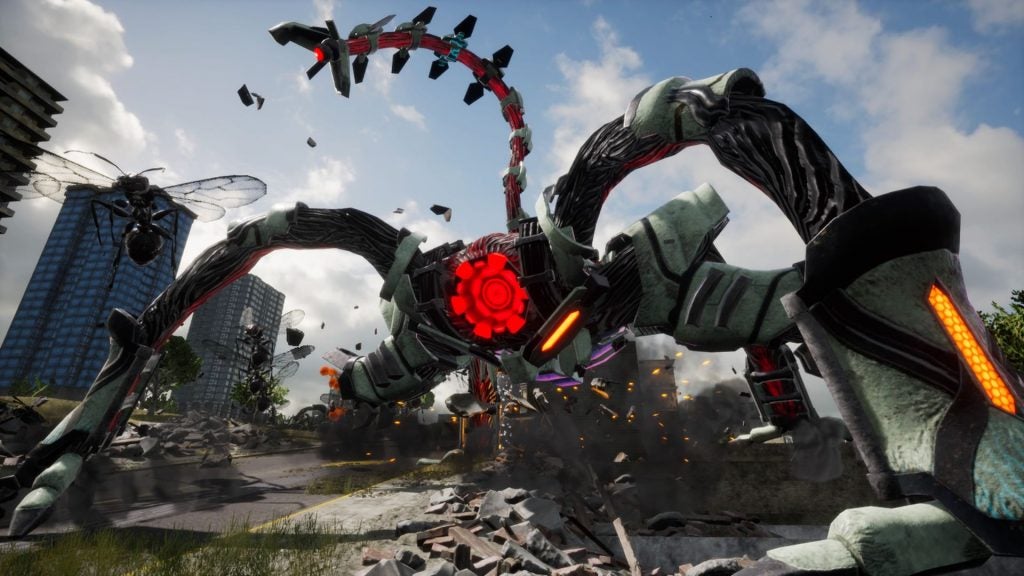 Technical issues aside, a few hours into Iron Rain evolves into a lovingly schlocky shoot-em-up that encourages you to cause as much trouble as possible. This is emphasised by a formula that takes the brief customisation of past EDF outings and enhances it significantly. In the opening minutes you’re designing your own avatar and dressing them up in military gear ripe with accessories.

You can look like an utterly unstoppable marine or a bumbling anime superstar, surviving each encounter by the skin of their teeth. Things get more ridiculous as you progress with more outlandish and revealing outfits being unlocked. This is also where EDF’s juvenile sexualisation comes into play, with female character body types being judged by boobs, butts and nothing else. It’s an unpleasant blemish in a system that’s otherwise wonderful.

Constantly acquiring new weapons and vehicles to play around with was excellent fun, especially since almost all of them proved a blast. Missile Launchers arguably take too long to lock on, but the gnarly explosion that comes when they’re finally unleashed is so worth it.

To really gel with Earth Defense Force you need to accept its flaws. They’re fundamentally flimsy when it comes to their own internal logic. Physics are dodgy, while the storytelling is purposefully terrible in a way that embraces its B-movie origins. I came to love its nonsensical dialogue and never-ending stream of alien insects to murder, even if Yuke’s version fails to live up to the series Sandlot created almost two decades ago.

I wouldn’t recommend Iron Rain over Earth Defense Force 5, since it fails to deliver the distilled, charming experience I adore from the Sandlot series.

That said, it makes some welcome advancements to the formula, with deep customisation features and plenty of loadouts to mess around with. It’s just a shame technical problems are so pronounced, even on the enhanced console. But, for fans of the series, this is worth a gander.