The Dyson AM09 is the latest ‘Hot + Cool’ air multiplier fan-turn-heater from the vacuum cleaner specialist. It introduces what Dyson calls Jet Focus, which adds a second airflow aperture ring that pushes air out in a narrower, more precise way. In other words, instead of just cooling or warming the whole room, Jet Focus gives you a soothing blast of air just for you.

This new feature doesn’t come cheap, though. The Dyson AM09 will set you back a penny shy of £400 – £100 more than the already excellent Dyson AM05 Hot + Cool. But if you value design flair and engineering excellence then the AM09 is a must have have for any stylish office or living room. 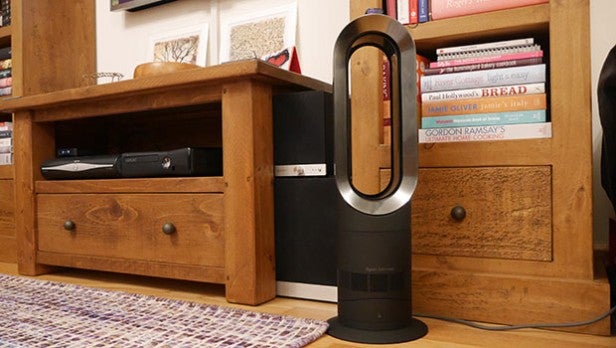 Despite playing host to a flurry of new features, the AM09 looks virtually identical to its predecessor – I think it looks like an oversized needle with the pointy end removed. Like previous Dyson air multipliers, the latest AM09 oozes style and high-end appeal. It’s easy on the eye, well-constructed, so the fact it looks the same isn’t a problem.

The silver on black model we tested has a matt touch finish, which further enhances the sleek, premium look. It is prone to fingerprints and is something of a dust magnet, however. If the Darth Vader-esque look isn’t for you, black/blue and gloss white/silver options are also available.

Despite the visual similarities, there are some design refinements over past models. Dyson has removed the smattering of controls on the base in favour of a single power button. This gives the unit a neater, cleaner look, but it isn’t the most convenient choice. Yes, the controls have been relocated to the handy, compact remote, but the lack of any on-board controls can be frustrating at times.

Fortunately, the small, ergonomic remote that clips to the top of the fan heater’s curved body remains. This makes the remote easier to store, harder to lose, and somewhat compensates for the lack of onboard controls.

Overall, the 59.5cm tall AM09 is compact and easy to store when not in use. It’s stable despite a footprint small enough to sit comfortably on floor or countertop. A tilting base and oscillating movement allowing for more targeted heating and cooling. 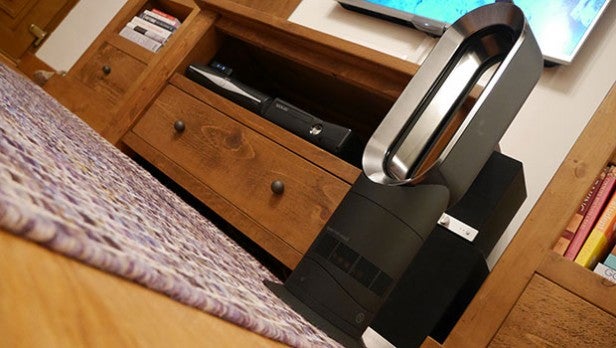 As noted earlier, the headline new feature on the AM09 is its Jet Focus tech, which lets you project the warm or cooling airflow at an individual. It uses the Coanda effect, which causes air to charge direction as it travels over a surface, and two aperture rings to regulate the spread and direction of air generated.

Switching between the two modes is simple. Dedicated buttons on the remote allow you to pick and choose the airflow pattern, with the fan acting promptly to your choice. A small LED display on the AM09’s base even shows if you’re blowing hot or cold, wide or narrow, and just how powerful a puff the machine is giving.

The Jet Focus mode is a huge success, too. It might sound like a lot of hot air, but by any name it’s a brilliant advancement.

Being able to more precisely direct the machine’s airflow is a major boon – I often found it perfect for a quick hit of warm or cool air when I needed it. It’s sure to please in the heights of summer and the depths of winter, and is perfect for home offices and anywhere you’re often alone

Like on the company’s past air multipliers, a brushless motor and bladeless design combine to ensure airflow is not buffeted. This might not sound like a major advantage, but you won’t want to revert to a choppy, bladed fan once you’ve tried it. It’s an expensive option, but one which gives a luxury performance. 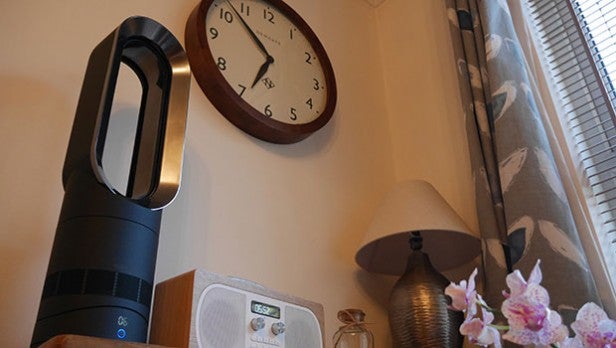 The AM09 isn’t oppressively loud, either. A new aerodynamic diffuser helps cut down on fan noise – it’s considerably quieter than its predecessor. The room filling mode is the noisier of the two modes, but not by much.

Cranking the unit up to full whack – 37C, power 10 – did kick out a fair bit of noise, but it’s not unbearable. At less extreme settings, a few clicks up on the TV’s volume control quickly renders the fan distant background noise. In an open plan home, a boiling kettle or running washing machine cause far more noise irritation and disturbance.

More importantly, once the room is close to its target temperature (a speedy process largely dependant on the size of the room), the heater holds back, reducing its noise and output to maintain the optimal state. If you’ve overheated a room, it’s not a problem either. The AM09 can quickly switch from pumping out heated air to creating a cooling flow with little fuss.

As well as being far easier on the eye, the AM09 is considerably safer than some alternatives. It won’t scold the wayward hands of any inquisitive child like a an electric bar heater would, for example. After 30 minutes pumping out at full heat, the AM09’s body was comfortable to touch – you could move it easily without discomfort.

The 3-metre power cord shouldn’t cause you an problems when it comes to plug placement, either – I found this afforded enough freedom to place the fan in any discreet but efficient location.

Although on heater mode air is warmed before being pumped out, it’s important to note that the AM09 isn’t an air conditioning unit. It doesn’t produce cold air but accelerates a room’s air to create a cooling effect. This is still a highly effective means of cooling, however, taking the humid discomfort out of the air within a matter of seconds.

Should I buy the Dyson AM09?

If your bank balance can handle the near £400 hit, then the AM09 is hard to overlook. Unlike single use alternatives, the AM09 won’t spend half the year tucked away in a dusty cupboard. It’s useful all year round.

It’s a great, stylish fan and heater that’s perfect for upmarket living rooms, home offices or anywhere that needs what the Dyson offers. The Jet Focus feature works very well, and is something no rival can offer at present.

Are there cheaper alternatives out there? Definitely. But none are as stylish, sophisticated and unobtrusive as the the AM09. If you value those qualities then it’s a good purchase; if not, look elsewhere.

Dyson’s AM09 air multiplier is unrivalled in what it does. That’s reflected in the price, but you do get what you pay for.