Update 30/07/15: Dyson recently released the Dyson AM09, which is an updated version with new features. Should you buy the new one, or is the AM05 still worth considering?

The first big difference is the price. Dyson’s ‘air multipliers’ are already expensive, but the AM05 is £100 cheaper than the £400 AM09. The basic design is similar and they both offer cool and hot air modes, but the AM09 adds some more advanced features.

The main one is called Jet Focus, which allows you to direct the air in a more concentrated direction – i.e. straight at you rather in your general direction. This means it can warm and cool you more quickly, while also ensuring it doesn’t disturb anyone around you who doesn’t need or want the fan on.

If you just want a general purpose option for around the home, however, the AM05 is still a very good option so don’t rule it out.

The Dyson Hot + Cool has touched down as a heater turn fan tasked with keeping your desired temperature needs abated no matter what the season.

An amalgamation of the company’s past individual fan and heater offerings, the Dyson Hot Cool, also known as the Dyson AM05, is capable of tackling both heating and cooling elements with equal aplomb. The latest device to utilise Dyson’s Air Multiplayer technology, the Dyson Hot Cool works in much the same way as its predecessors, such as the Dyson Air Multiplier AM01, with improved features and added efficiency thrown in for good measure.

The latest device to come from the company renowned for producing premium vacuum cleaners, the Dyson Hot Cool allows users to heat, or indeed cool, a room to their desired temperature, anywhere on a scale from a chilly one degree Celsius to a balmy 28.

Improving safety with low surface temperatures and helping reducing heating costs with a reduced 2kw maximum energy consumption, the Dyson Hot Cool ticks all the boxes for a consumer appeasing all-round heater turn fan. With a lofty £349.99 price tag, however, the multipurpose machine could be a hard sell.

We take a closer look at the Dyson Hot Cool to see if it is simply a jack of all trades, master of none device, or a true collaboration of the company’s hugely popular and brilliantly effective past heating and cooling products. 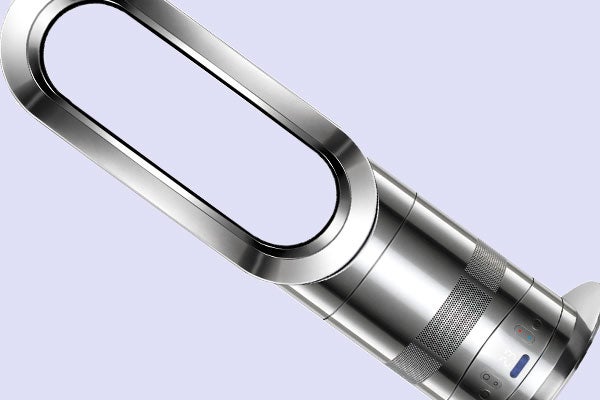 Next review to read: iPad Air

In classic Dyson fashion, the new Dyson Hot Cool is extremely easy on the eye, playing host to a lusciously curved form factor that, through a range of colour options, will sit comfortably in most home or office decors, from the ultra-modern to more traditional, taking in all stopping points along the way.

Crafted from tough, hardwearing Acrylontrode butadiene styrene, a type of thermoplastic used in riot helmets, the Dyson Hot Cool is a solid piece of kit. Measuring in around knee-height, the air multiplying oval stood up, without a mark, to a selection of our bump, knock and drop tests designed to see how the device would cope with passing pets, children and unavoidable accidents.

With new, stunningly futuristic black on nickel and nickel on nickel colour schemes being added to the iron on blue and white on silver options that were offered with the original Dyson Hot, the new, all-purpose machine is more attractive than ever and a device that would remain a talking point with visitors long after purchase.

Playing host to no visible heating elements, motor or fins, the now familiar hole in the centre of all of Dyson’s air multiplier fans and heaters features one again on the Dyson Hot Cool. Asking to be explored by curious minds, pleasingly, despite the unit’s ability to kick out heated air, it is perfectly safe to stick your hand straight through the middle without concern of being burned, perfect for those with small children in the house.

Weighing in at a comfortable 2.57kg, the Dyson Hot Cool can easily be moved around your room, flat, office or house with a dead spot at the very top of the unit’s arched design remaining cool enough to handle even after lengthy periods of heavy usage.

As an added nod to the company’s design prowess, the Dyson Hot Cool remote features a compact, ergonomic form factor that has been curved to the same angle as the top of the fan. With magnets fitted into the top of the heater unit, the remote can be stored without concern on the fan itself, sitting perfectly as an extension of the main device. 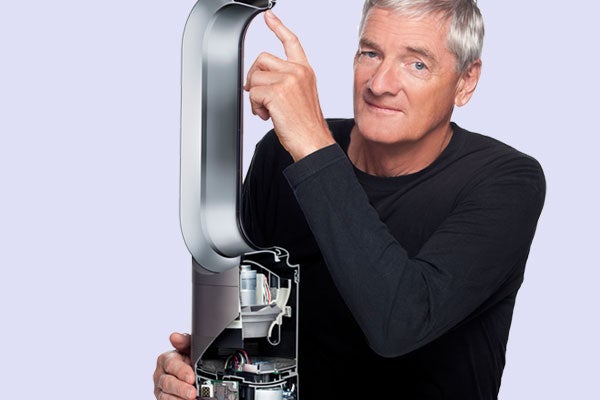 Featuring a brushless motor with 33 per cent more output performance that the original Dyson Hot, the new Dyson Hot Cool is capable of pumping out a staggering 28 litres of unbuffeted air per second.

Channelling this output through 2.5mm apertures set within the loop amplifier, air is then passed across an airfoil-shaped ramp (angled to precisely 5-degress) allowing the unit to offer improved, more efficient output that is not diminished by buffeting, gaps in airflow or fluctuations in temperature.

Although this might not sound like the sexiest of features, when compared with a standard blade fan or bar heater, the instantly noticeable difference is immeasurable. What’s more, it quickly becomes a feature that once experienced will deter you from ever returning to the less technologically advanced options.

Unlike basic electric heaters which simply kick out a patch of warmth directly in front of the machine, which then quickly dissipates before reaching the far corners of the room, the Dyson Hot Cool is capable of evenly heating rooms, covering every nook and cranny with equal warmth. Optimised to achieve this even spread of heat in spaces up to 6m x 6m in size, a good size living room, bedroom or study in real world terms, the Dyson Hot Cool, even turns itself off once it senses rooms are at the optimum temperature.

What surprised us most when setting up this four season friendly heater turn fan, however, was the projection achieved by such a compact device.

With either kicking the fan to the max or setting the heating elements to high, the Dyson Hot Cool was capable of projecting is multiplied air over an almost 10 metre range with ease, when in direct line of sight. Move to the periphery of the unit’s output and the instant effects of less noticeable. However, on heater mode the gradual build-up of temperature quickly becomes clear.