A sturdy and well-built appliance, the Dualit Studio 2-Slice Toaster does a good job – but lacks some features.

What is the Dualit Studio 2-Slice toaster?

The Studio 2-Slice toaster is part of Dualit’s range of home appliances promising “stylish modern designs and innovative technology at an affordable price”.

While the design is striking, and the price slightly lower than the £70 Dualit 2-Slice Lite toaster (you can see our review of the Dualit 4-Slice Lite toaster), the Studio toaster has been pared down to standard functions, therefore lacking the “wow” factor. 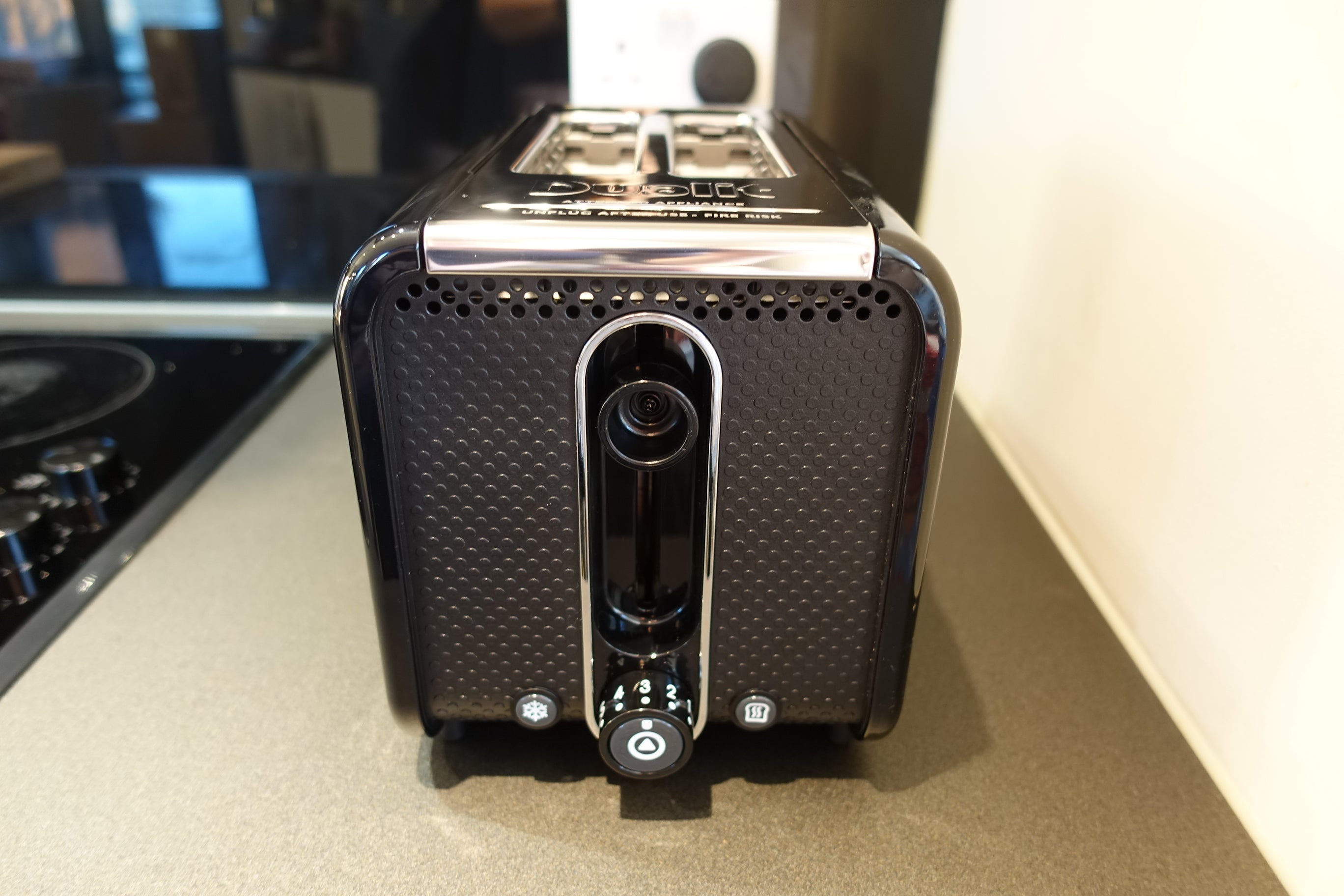 There’s something about the Dualit Studio 2-Slice toaster that makes me think of bachelor pads. It’s a very handsome appliance, perfect in a minimalist kitchen and economical for someone living on their own.

Clichés aside, it’s quite sturdy for a two-slice toaster and very unlikely to tip over. So, it’s almost surprising to pick it up and discover it weighs only around 1.5kg. 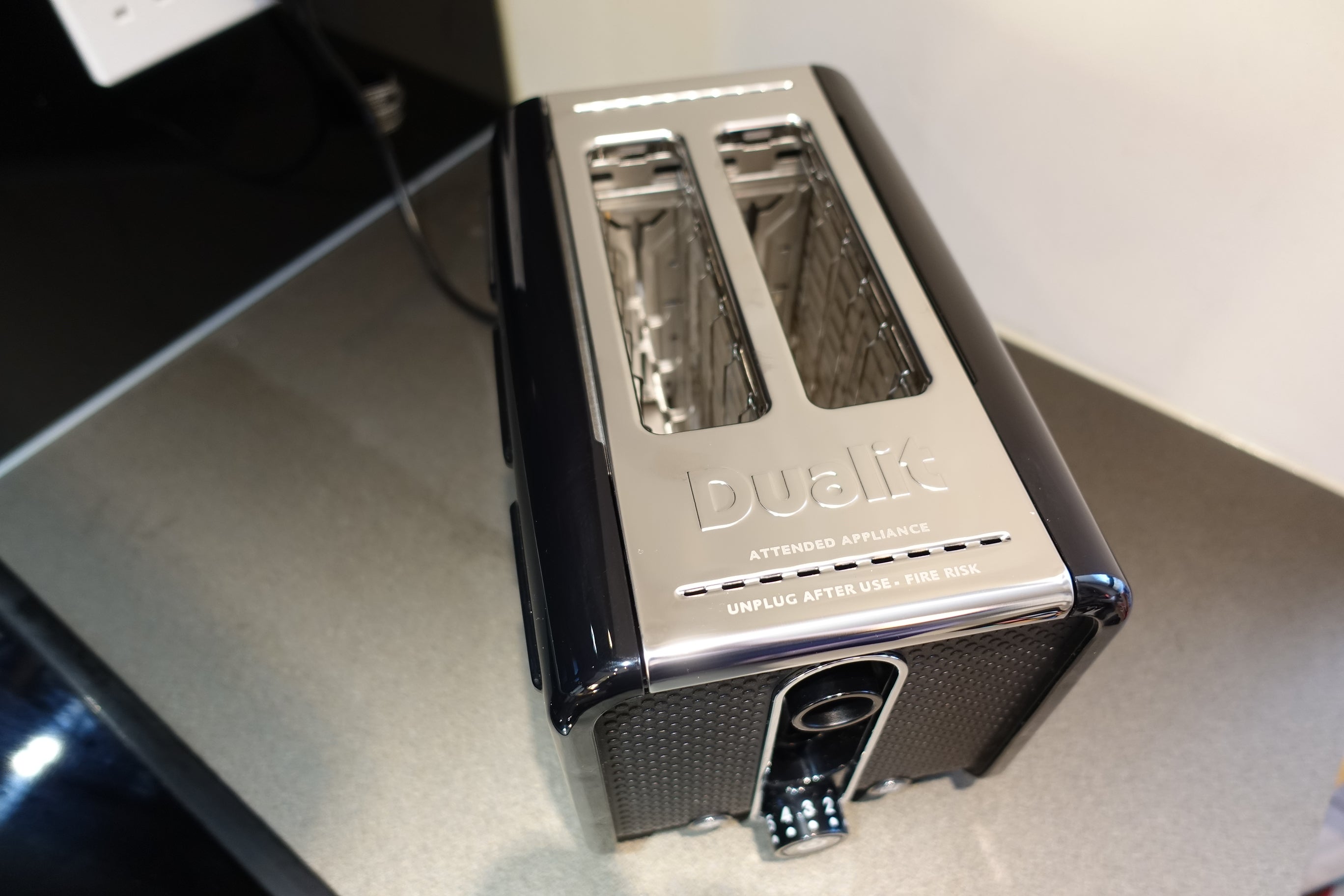 The Studio toaster is available in black with a polished trim, or in white and grey. I tested the striking all-black version, which has glossy plastic sides and a textured front with a dotted pattern.

It features surprisingly heavy Dualit branding, with the manufacturer’s logo stamped on three sides and in the stainless steel top. However, all the logos are embossed, meaning none of them really stand out unless you look at it closely.

The lever sits in a groove, so the only part of the toaster that protrudes is the browning control dial, with clearly marked numbers from 1 to 9. 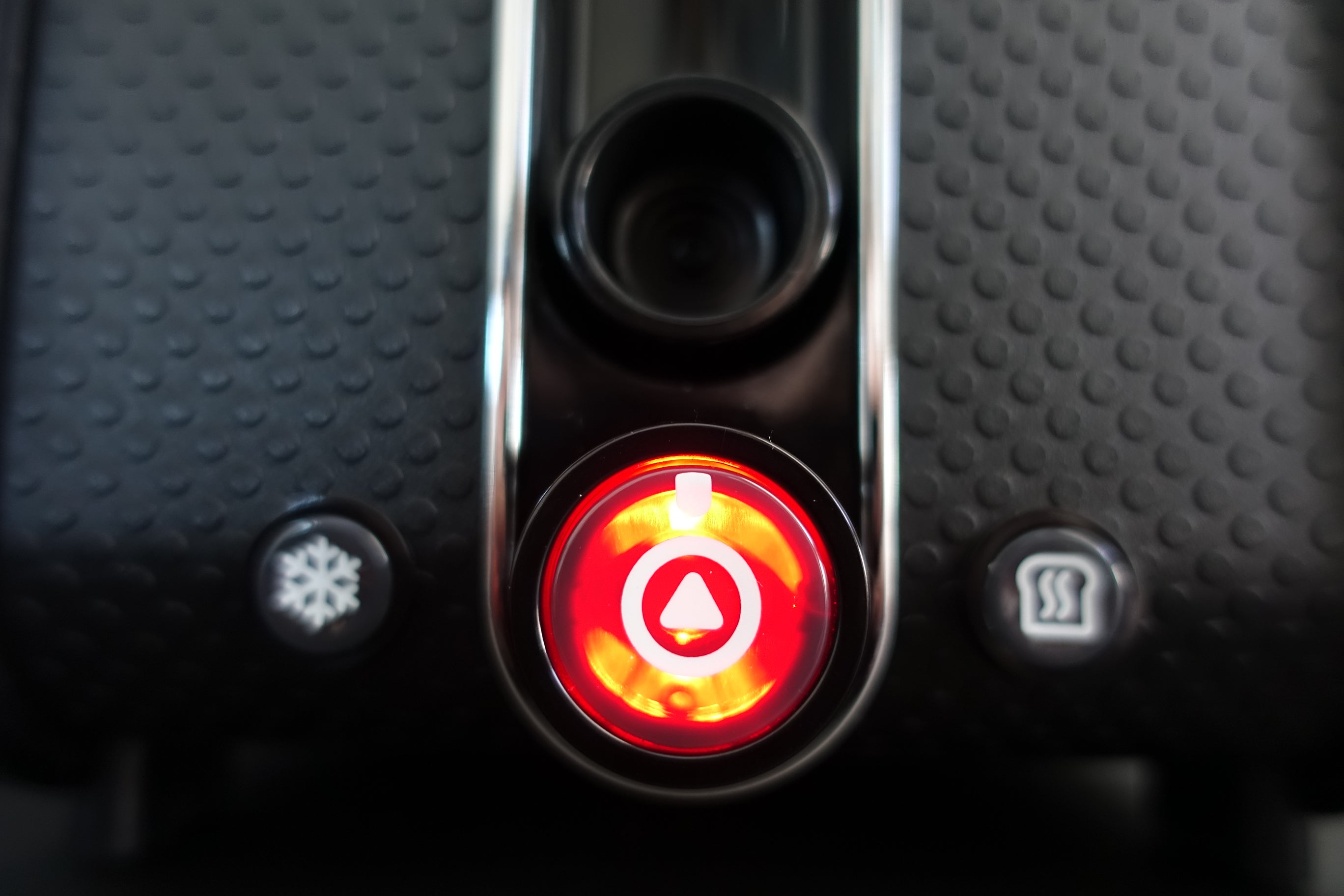 The dial lets you settle between those numbers, with two increments available; it makes a subtle ticking sound when you turn the dial. (You can fine-tune your toast to 3 and 1/3 or 3 and 2/3.)

The dial doubles up as a cancel button, which lights up red whilst the lever is down and the toaster is in use.

The defrost button sits on the left of the browning dial, with the reheat button on the right. Both buttons light up red when pressed.

At about 18cm wide, 27cm deep and 20cm high, the Studio toaster doesn’t take up too much countertop space. It has a generous 90cm cable, which measures nearly 75cm from the back of the toaster, allowing for easy placement. Should you find it too long, there are hooks for cord storage on the underside of the toaster. 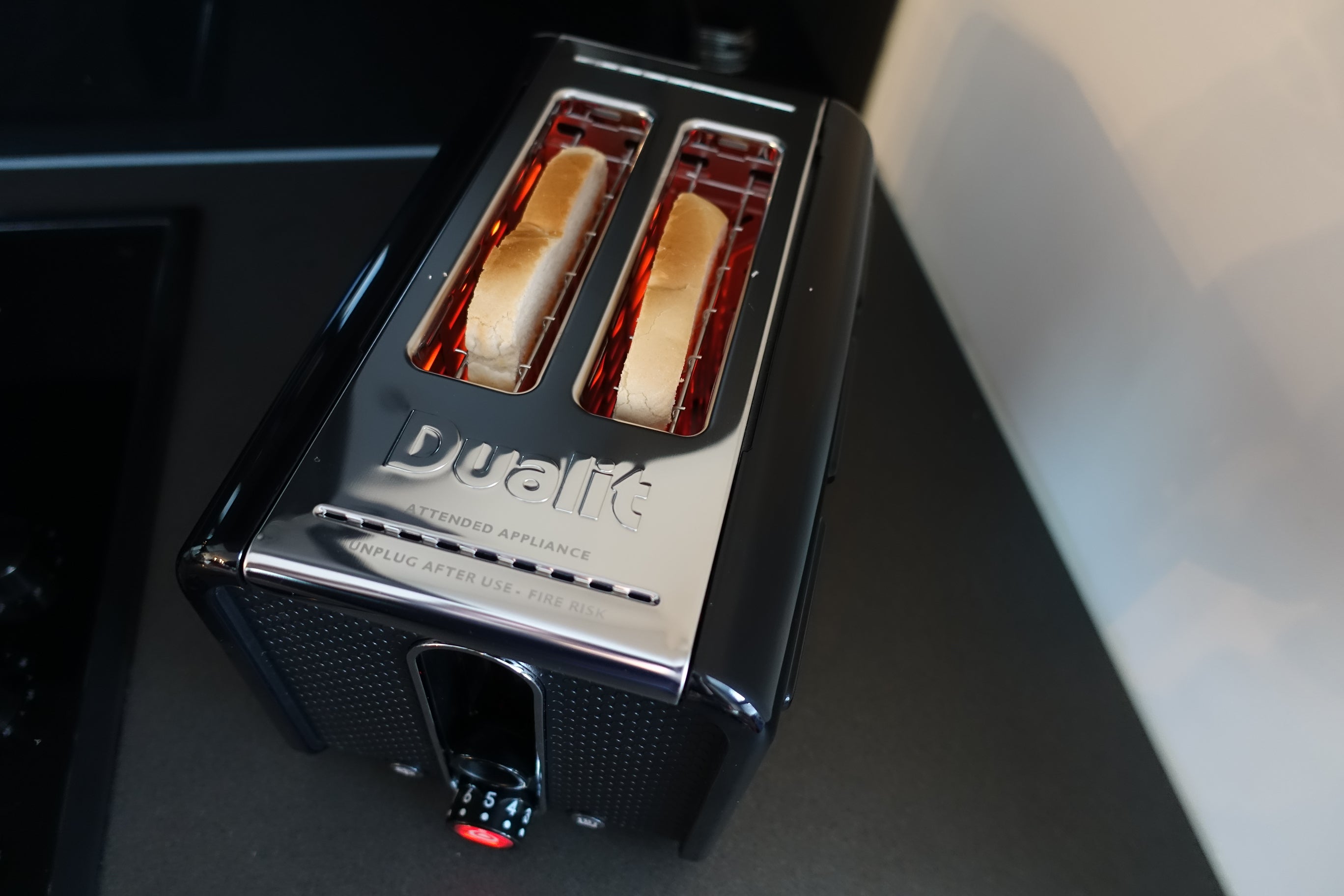 The slots are 3.5cm wide and the mechanism inside will adjust to the width of the bread you’re toasting. Dualit cautions that the thickest slice the toaster will fit is 2.8cm.

As with most toasters, the crumb tray sits towards the bottom at the rear and is easy to remove.

The illustrated instruction manual is brief yet informative. In addition to a general toasting guide and safety tips, there’s a table with suggestions of which browning setting to use. 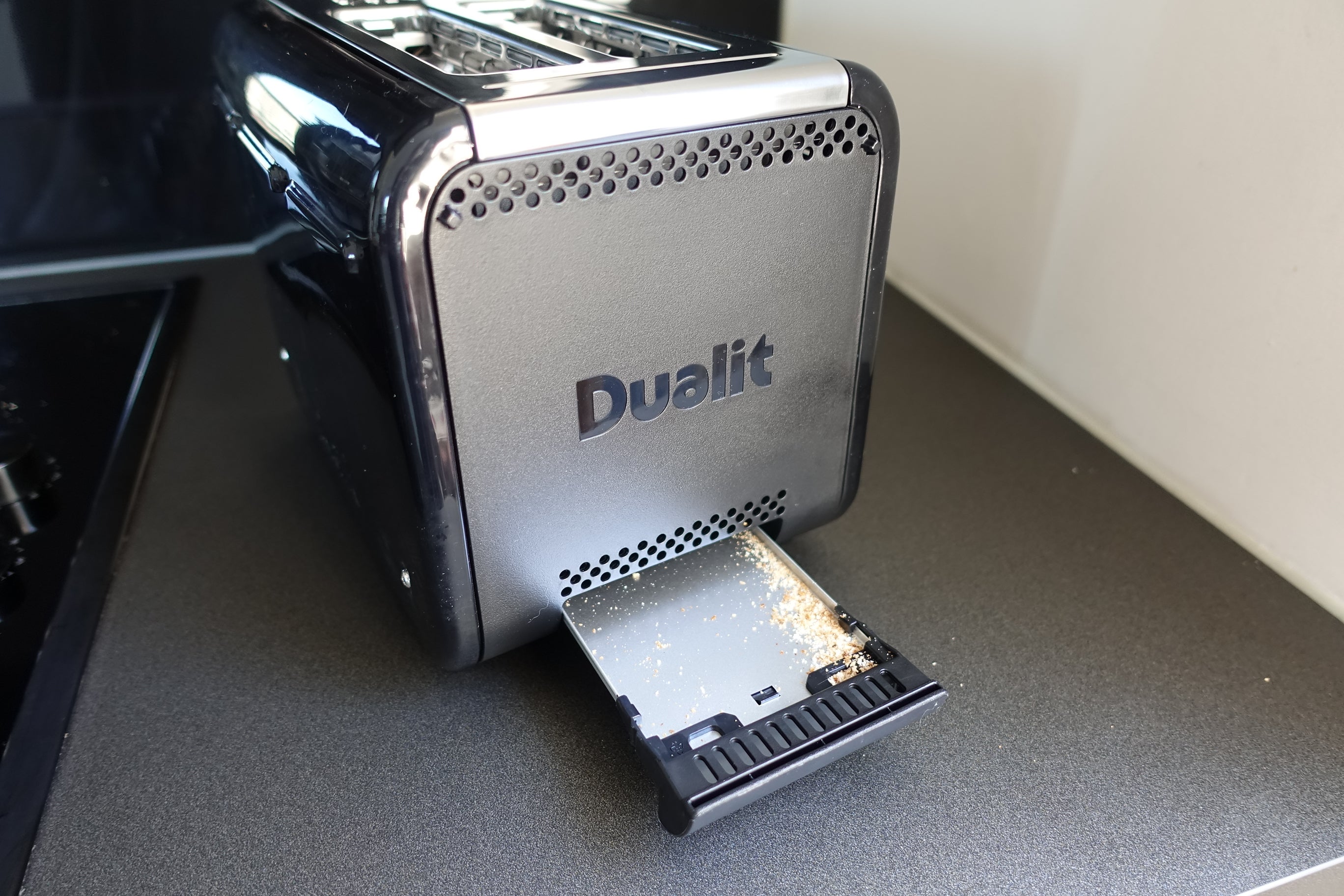 Dualit Studio 2-Slice toaster – What’s it like to use?

While the Studio toaster’s manual recommends toasting two-day-old white bread on setting 5, I found the result looked and tasted a tad burnt.

This may be due to the fact that the bread I was toasting was your regular supermarket fare – although freshly purchased, it could have been sitting on the shelves for far longer than two days. Still, taking level 5 as a starting point may be a little extreme and I’d recommend a lower setting to familiarise yourself with this toaster.

I found setting 4 for medium-white slices plenty dark; personally, I wouldn’t want it any darker. The toaster was quite fast, delivering sufficiently browned bread in around 2mins 10secs. 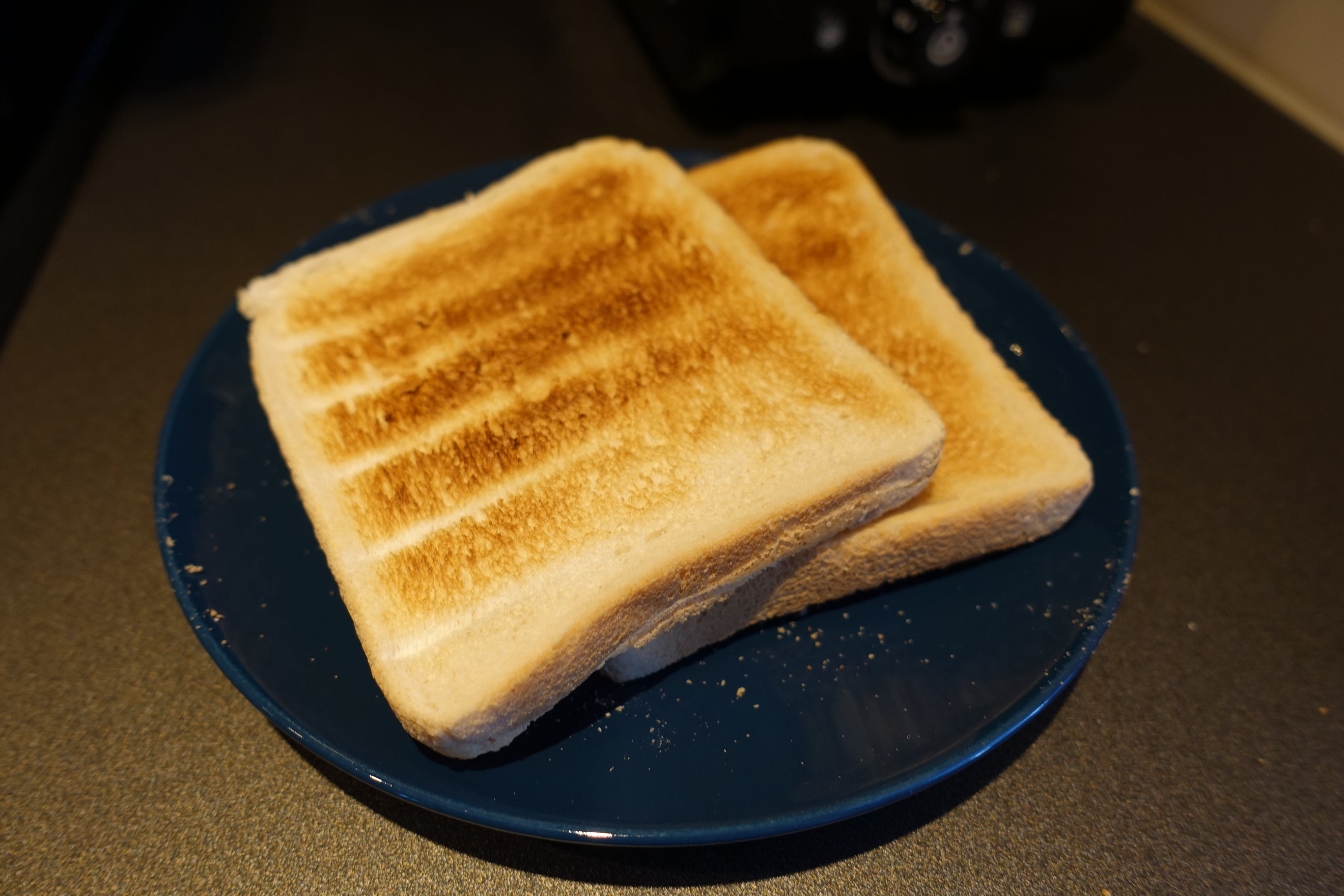 However, the results in terms of the level of browning and time it takes to toast will depend on the type of bread and its thickness. Furthermore, if you’ve used your toaster recently, or you’re toasting a single slice (rather than two), you’re more likely to get darker and/or quicker results.

I tried toasting wholewheat bread at setting 2, which emerged a little pale. The next test slices at setting 3 were sufficiently browned, taking just under two minutes. 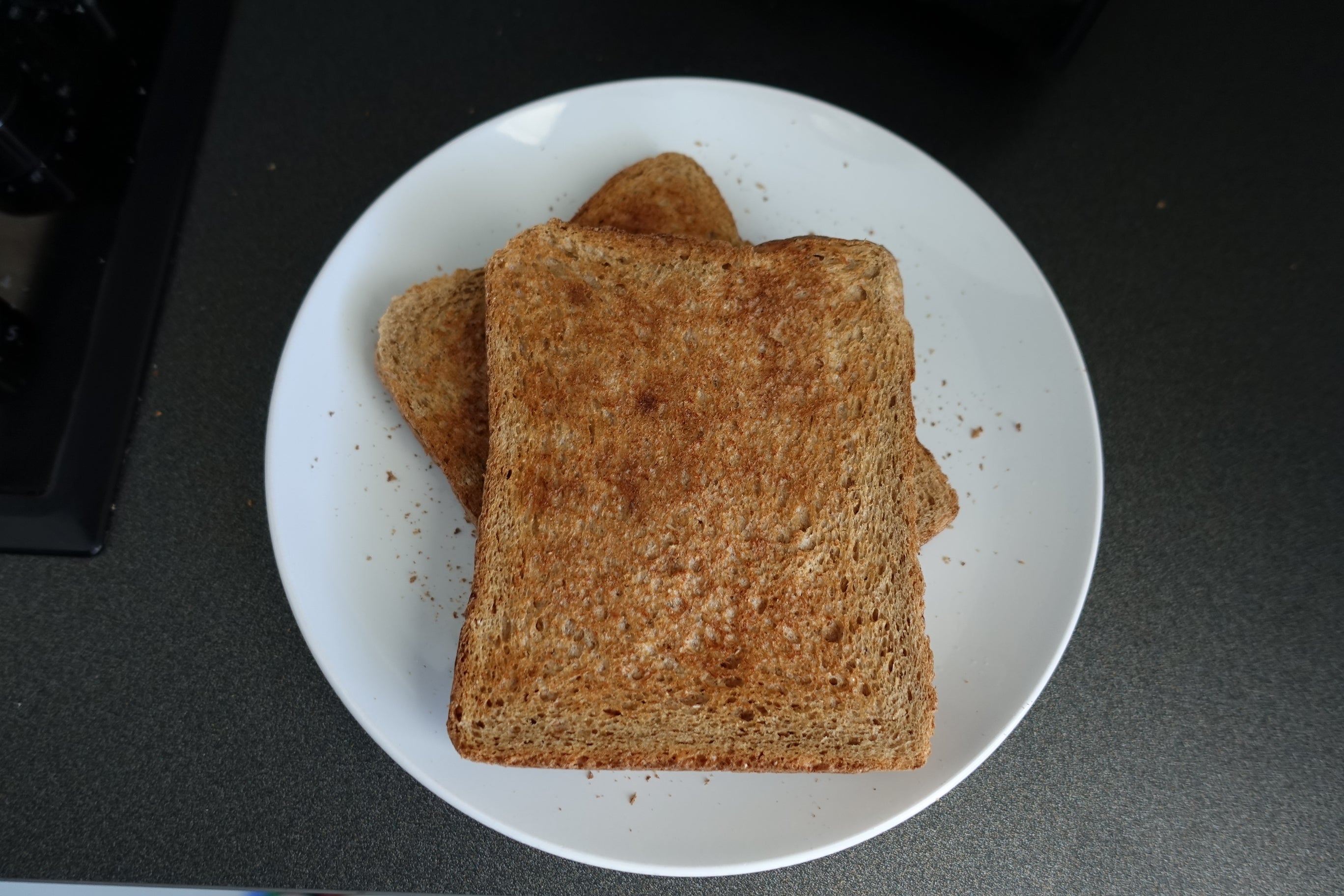 I then tried reheating one of the slices, which took 30 seconds and restored it to its previous freshly toasted crispiness. The reheating process can brown the toast a bit further, so you may need to keep that in mind if your toast is already quite dark.

Taking some medium-white slices straight from the freezer, I toasted them with the defrost function on setting 4. This resulted in evenly toasted crispy bread in just under 2mins 25secs.

When toasted vertically, up to 2cm from the top of the slice remained barely toasted and therefore a little soft – this isn’t a very deep toaster. 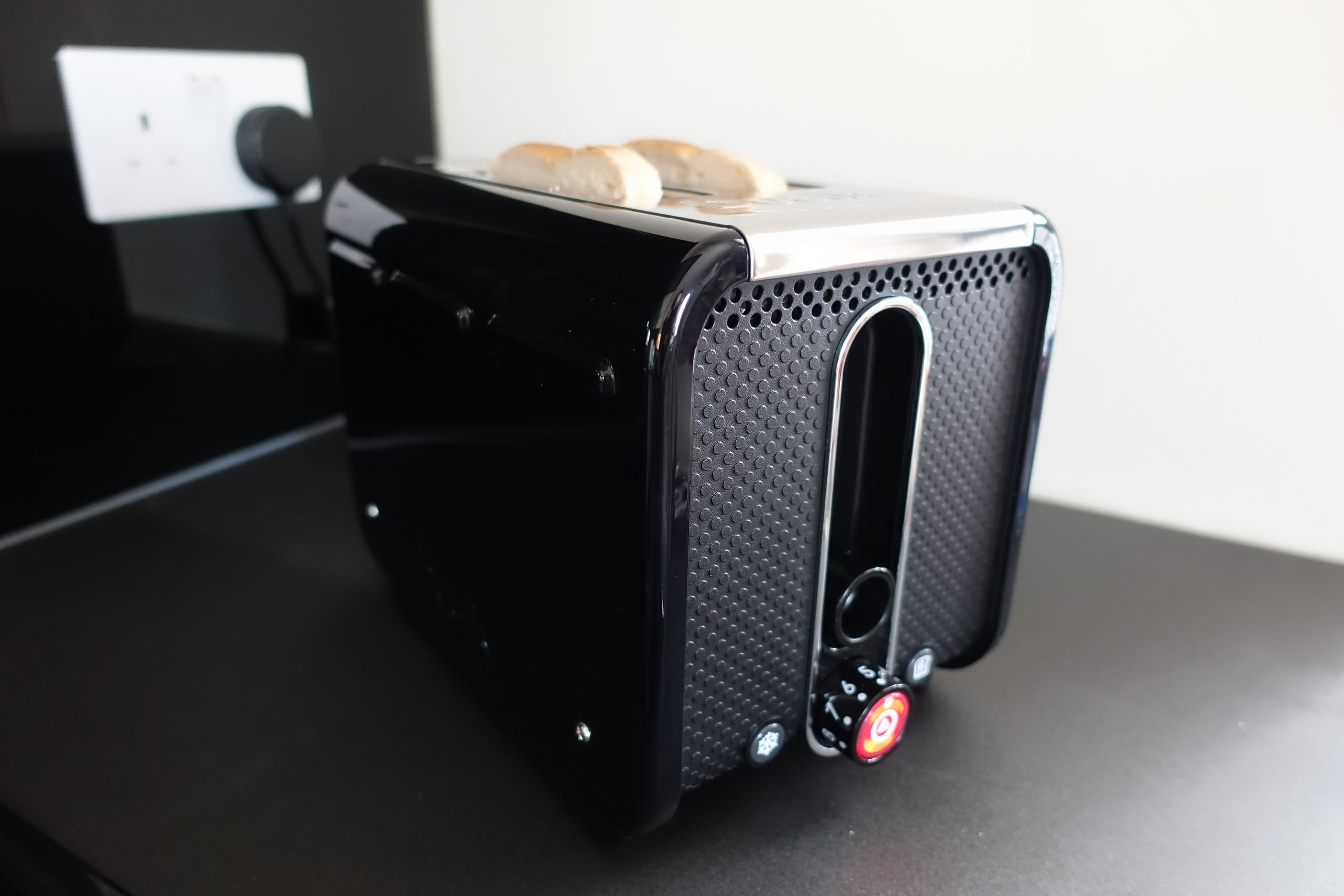 But worry not, the toasting slot here is nearly 14.5cm long – one of the longest toasters I’ve tested (they’re usually closer to the 14cm mark), allowing for taller bread to be toasted sideways.

Toasting your bread horizontally means more of your bread will brown and you can enjoy a crispy crust all around.

Overall, I was impressed by the consistency of the toasting. I didn’t experience any hotspots or blank patches that are a sign of uneven toasting. 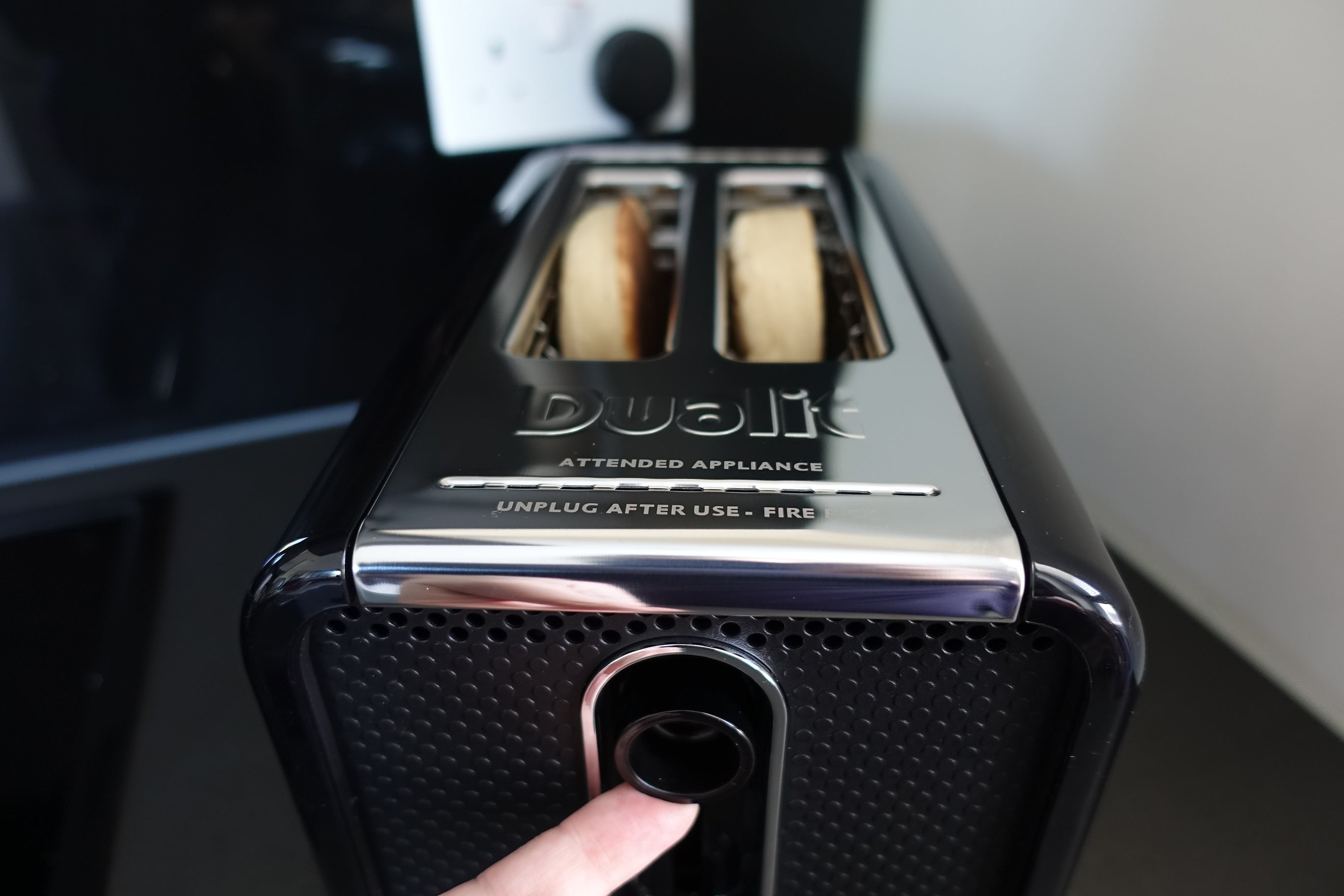 Finally, I toasted crumpets on setting 4, which turned out warm and slightly crisped. To extract the crumpets after toasting, I had to push up the lever further, but this was easy enough and I didn’t need to resort to tongs to pull out the crumpets.

The springs are strong enough to push their load up all the way when toasting is complete, but they’re quite gentle – your Pop-Tarts won’t come flying out. 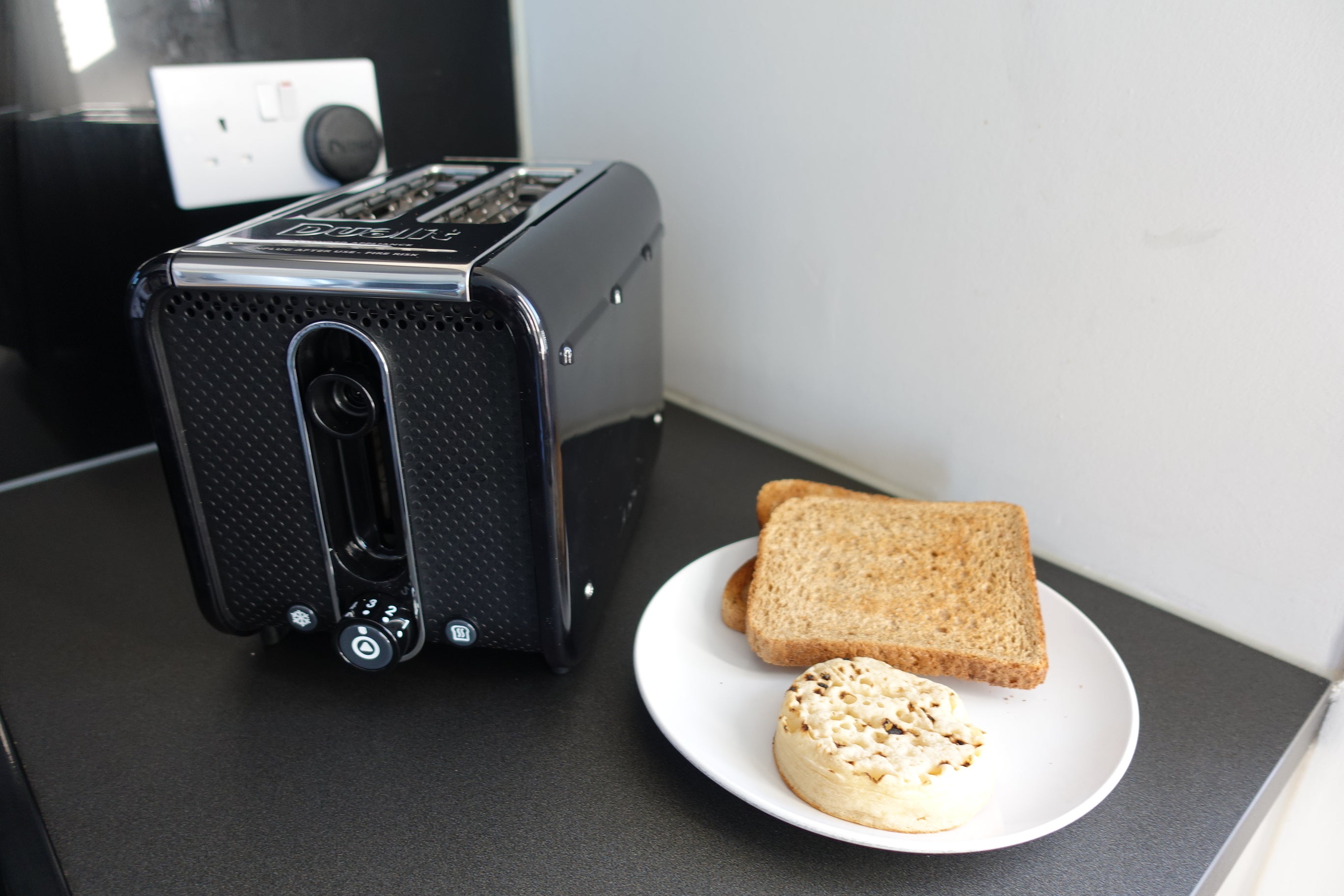 If you’re looking for a solid, straightforward two-slice toaster that looks modern and stylish and produces very even toast quickly, the Dualit Studio won’t disappoint.

However, the Dualit Lite 2-Slice toaster has a bagel function and a take-a-peek option with an RRP of just over £10 more. And should you prefer a four-slice appliance, our list of the best toasters will have something for you.