With its The Force Awakens playset, Disney Infinity 3.0 concludes this year’s run of Star Wars playsets with what’s sure to be a hit, if only because it’s the closest thing to a tie-in game for the new movie. We say ‘closest’ because, much like the previous Rise Against the Empire set, it’s a heavily abridged version of the storyline with some slightly peculiar changes.

Characters go missing, roles are dropped or swapped and entire scenes and sequences are added or removed. If you’re a Star Wars purist, prepare for a Kylo Ren-sized hissy fit.

From another perspective, those complaining about The Force Awakens’ appropriation of large chunks of Episode IV’s plot might think this playset a more faithful adaptation. Why? Because in terms of structure and basic gameplay, it’s pretty much Rise Against the Empire with a reskin.

Once again we get a couple of free-roaming hubs bookended and linked by more linear or even on-rails action sequences. If you played Rise or even the earlier Twilight of the Republic playset, you’re going to experience some deja-vu. 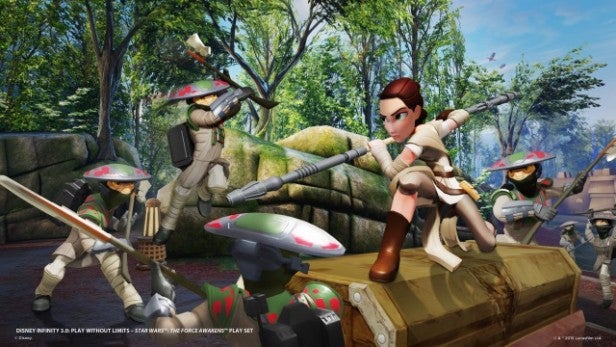 The hub areas are effectively task-based, asking you to complete a series of missions that might involve collecting a number of items, fixing a number of uplink stations or setting up fences and herding critters behind them – not much of a feature of the Star Wars movies, but a recurring theme of the Infinity 3.0 playsets. The action sequences, meanwhile take the form of on-rails blasters, simple space-combat missions or basic third-person shooter or platform sections. What’s more, you’ll find more action sequences, stunt and race challenges and even fun retro-flavoured arcade mini-games hidden away around the hubs.

As always, the entertainment value varies. Some of the action sequences are storming, recreating some of the best Force Awakens set pieces in a way that the game’s youthful audience should really go for. The space battles are fun, a couple of chase sequences work well and some of the shooting sequences are surprisingly tough and exciting. Sadly, the more prosaic and uninspired fix-this, collect-that missions are only growing more tiresome with repetition, and a few combat sections go on too long. On balance, there’s next to nothing here that’s exactly original, innovative or fantastic, but just enough of the movie’s magic crosses over to keep younger gamers interested. 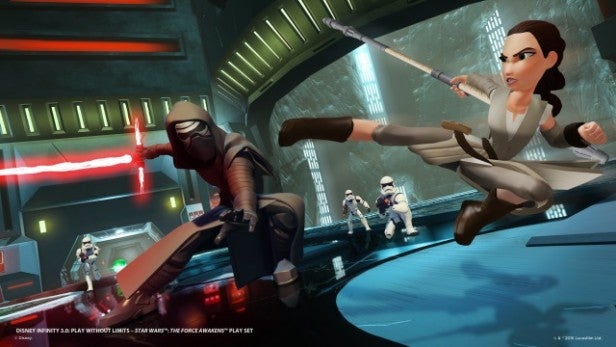 Some sections bear-up to repeated play, with timed objectives and bonus objectives that make getting a full three-star rating quite challenging. As before, flying between different star systems gives you the chance to revisit areas you’ve already completed, and while you can easily crack the campaign within four or five hours, there’s plenty to explore and a lot of secrets to discover. The race and stunt challenges and the arcade mini-games alone will keep a Star Wars-crazy family busy for a while.

The real long-term value, though, lies in the included figures and in the amount of stuff you can unlock and add to the Infinity toybox for creative endeavours. In this respect, The Force Awakens isn’t quite as strong as Rise Against the Empire in that it builds so heavily on scenery and vehicles types you’ve already seen in that set (if you have it), but there are still new elements, new characters, new speeders and vehicle variants to unlock, all of which will help the kids restage or add to the storyline of the new film. 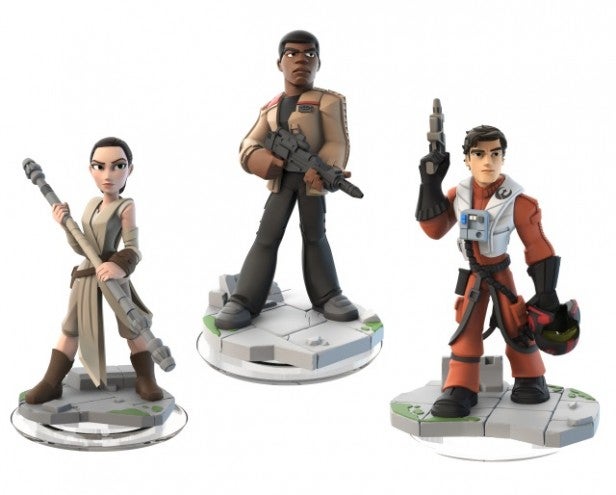 The playset comes with figures for Rey and Finn included, each of whom has a mix of melee and ranged weapon attacks – Rey is stronger on the former, Finn stronger on the latter – which you can upgrade as you gain experience and level up. You can also cough up extra for all-new figures of Poe Dameron or Kylo Ren, though playing as the new movie’s baddie is almost as surreal an experience as using Darth Vader was in the Rise Against the Empire playset. After all, nobody is as happy to herd cheerful pigs or help set up a stunt racing track for bored smugglers than everyone’s favourite sulky Sith lord wannabe.

The new members of the cast provide their voices too, with Daisy Ridley, John Boyega and Oscar Isaac handling Rey, Finn and Poe, while Adam Driver plays Kylo Ren. Unsurprisingly, Han Solo and Carrie Fisher haven’t provided voices for Han and Leia, but the replacements – particularly for Han – aren’t so bad that it spoils the atmosphere. 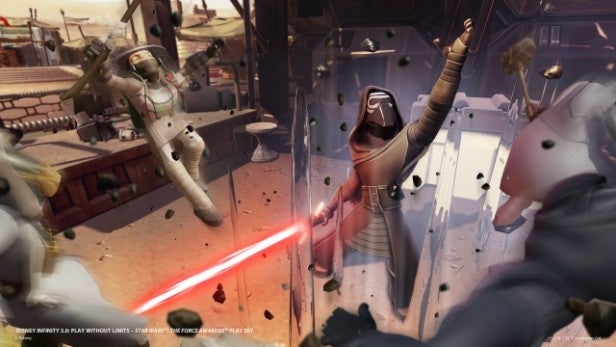 If you want to make things even stranger, you can collect tokens to unlock figures from the existing Star Wars playsets to use here instead, including the young Luke, Han and Leia plus Ahsoka, Yoda and Obi-Wan. Still, remember that while you may be bothered by such timeline-warping shenanigans, the core Disney Infinity 3.0 audience will see it as just another part of the fun.

Verdict
Rating this playset is tricky. As a game it’s pretty average, and it’s disappointing to note how flat and generic Infinity’s game design is becoming, particularly when you compare it to the inspired lunacy of Lego Dimensions or the smart, tightly-engineered action of Skylanders: Superchargers. Weirdly, the best and most interesting stuff seems hidden away on the sidelines, where only the more committed players will discover it. Sometimes you feel that both Skylanders and DImensions put more trust in the players and what they can handle, and that a little more depth and complexity wouldn’t have been a bad thing here.

However, all the Star Wars stuff still works wonders, and The Force Awakens plays to Infinity 3.0’s biggest strength: its potential for kids themselves to get creative. Look at this playset less as a Star Wars game and more as a platform for Star Wars fun and there’s a lot here to get stuck into. For many young fans of the new movie, that’ll be enough.