First impressions of the UZ2715H’s picture quality are pretty good. The matte coating keeps reflections to a minimum, while the IPS LCD panel makes for excellent viewing angles, with little obvious colour shift or contrast loss when viewed off to the side.

The lack of resolution compared to a 2,560 x 1,440 27-inch monitor is clear, but it’s certainly not distractingly grainy or pixelated. You wouldn’t want to go much bigger at this resolution, but as is it’s perfectly usable.

The limitations became clear when we fired up our monitor calibration unit. This revealed a fairly limited level of contrast, coming in at just 370:1 with a black level of 0.63 nits and a white level of 229.03. That’s pretty poor and is something that comes across in real-world use with the lack of truly powerful brightness and deep darkness making for a somewhat subdued, washed-out image. 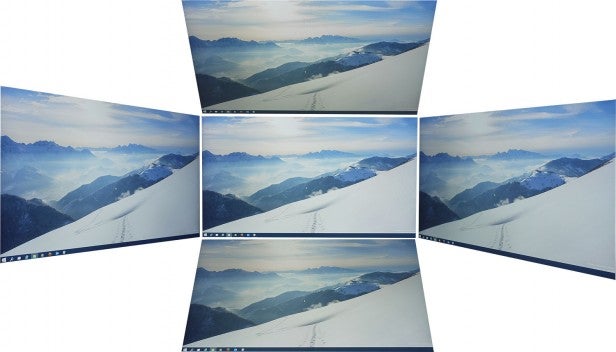 Otherwise this display performs surprisingly well. Straight out of the box its colour balance was spot on, with no need to adjust the monitor’s colour settings. Colour temperature was measured at 6135K, which is a little off the 6500K we normally aim for, but it’s still okay. The DeltaE of just 1.8 is also pretty good and there’s very impressive 94.3% sRGB colour space coverage.

Calibrating the monitor actually changed surprisingly little, with colour temperature increasing to 6294 but sRGB colour space coverage dropping to 91.1. Black level dropped ever so slightly, as did white level, making for a slightly reduced contrast of 366:1.

Backlight uniformity was OK, with most areas of the screen falling within 5% brightness difference of the centre. However the left edge was between 7%  and 14% darker, which isn’t ideal. Indeed you can just about make out the difference in brightness in our viewing angle test pictures above.

When it comes to gaming, there’s little need to opt for the optional game mode, as the native input lag is a mere 10.1ms, which is well below the ~30ms that would normally cause concern. Otherwise there are no fancy tricks here, such as G-Sync or super-high refresh rate. You can turn on Overdrive for an 8ms grey-to-grey response time, which is reasonably nippy, but the overall refresh rate is still left at 60Hz. Adequate would be the word. 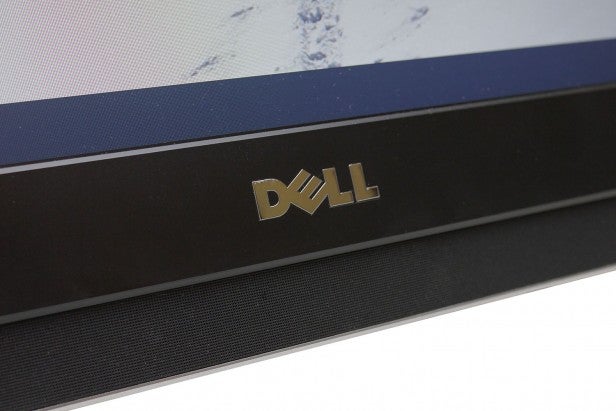 We were pleasantly surprised by the quality of the speakers in the Dell UZ2715H. They offer plenty of volume and surprising depth too. They certainly don’t pound out the bass, but there’s far more than just tinny high-end here.

Crank the volume up and the sound doesn’t distort either, with easily enough noise available to fill a room and make for a comfortable video viewing experience. Even listening to music at normal viewing distance is well within its capabilities.

Similarly the webcam and microphones do a good job and it really can’t be said enough how much more convenient it is to have them built in rather than having a separate unit. 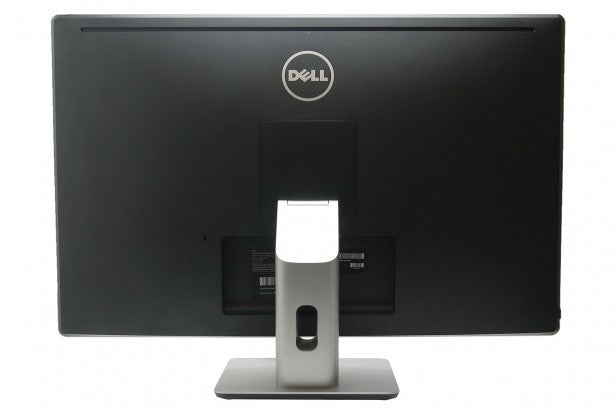 The Dell UZ2715H isn’t the finest monitor around. In particular its poor contrast levels do give it a more washed-out look than we’d ideally want, even for fairly casual use.

However, on every other level it actually does very well. The chassis looks nice, connectivity is good and overall colour accuracy is fine. Add in the convenience of an included webcam and surprisingly powerful speakers and you’ve got a great all-in-one entertainment and video-conferencing display.

As such it comes down to just how important having decent contrast is to you. We’d say it’s very close to being a deal breaker for anyone viewing this more as a home entertainment monitor where they’ll be watching in a darkened room. For more casual office or brighter-room use, though, it just about does enough to win us over.

The Dell UZ2715H is, for the most part, an excellent all-in-one multimedia monitor, with a useful webcam and powerful speakers. It’s also surprisingly colour-accurate right out the box. However, poor contrast lets it down. As such it’s more suited for general office work and video calling than as an at-home entertainment monitor.