What is the Dell Latitude 13 Education Series?

Dell’s Latitude laptops are usually designed for business, but the new Latitude 13 Education Series is intended for the classroom rather than the boardroom.

That means this machine prioritises practicality above everything else. It’s got a rubberised body, a splash-proof keyboard, a screen made from Corning Gorilla Glass and a huge range of customisation options. It’s not exactly a looker, but it be the perfect student laptop for all age groups. 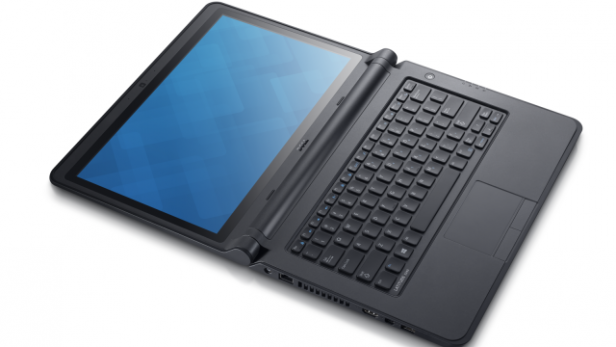 Build quality is vital when a system will be subjected to even the most considerate of classrooms, and the Latitude impressed. There was no movement in the wrist-rest no matter how hard we pressed, and the underside exhibited similar strength. The screen is attached with two sturdy hinges and it’s a thick panel, but the plastic rear is a little too flexible, and the screen wobbled when we pressed its centre.

The Latitude is built from plastic and the edges of the base and screen are lined with tough rubber designed to absorb knocks. The keyboard and touchpad are sealed from the rest of the internals so no components will be damaged by spills, and the screen is made from hard-wearing Corning Gorilla Glass.

The tough exterior is matched with sensible touches elsewhere. The screen tilts all the way back to the desk thanks to a 180° hinge, and the right-hand edge has a quartet of handy status lights for power, network usage and more.

The downside to the Latitude’s strength is, inevitably, size. At 34mm thick and 1.9kg, while a little lighter than rivals like the Toshiba Satellite C55-A-12U and Asus V550CA-CJ104H, it is much thicker – you’ll definitely notice the Latitude’s presence in a backpack.

There’s one USB 3.0 port on each side, and elsewhere there’s an SD card reader, HDMI and mini-DisplayPort outputs, and a Gigabit Ethernet socket. You get an audio jack and a Kensington lock slot, too. Connectivity is great on the inside thanks to dual-band 802.11ac Wi-Fi and Bluetooth 4.0. 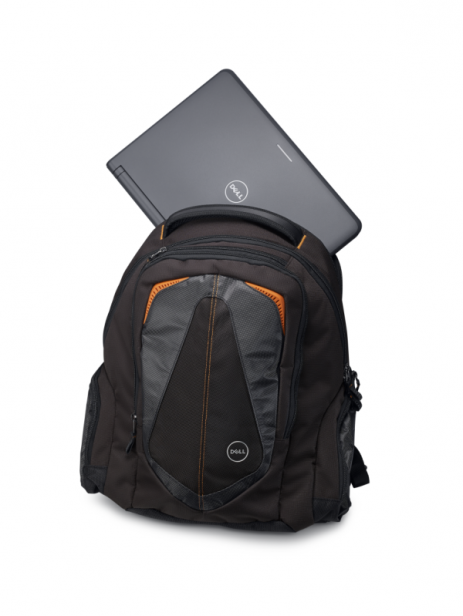 The screen tilts all the way back and it’s built using Gorilla Glass with a matte finish, but that’s where the good news ends.

Dell reckons the 13.3in screen’s 1,366 x 768 resolution is ideal for work, but we’re unconvinced: that’s enough pixels to have one Office window open, but try to line Word up against a web browser or an explorer window and this screen feels cramped.

The 230cd/m2 measured brightness isn’t bad, but benchmarks make for disappointing reading. That brightness level is paired with a black point of 0.75cd/m2, which is one of the poorest we’ve seen. Those figures mean the contrast ratio of 306:1 is dreadful, so the screen is hampered by blacks that look more like greys, a lack of distinction between extreme light and dark shades, and an absence of vivacity. 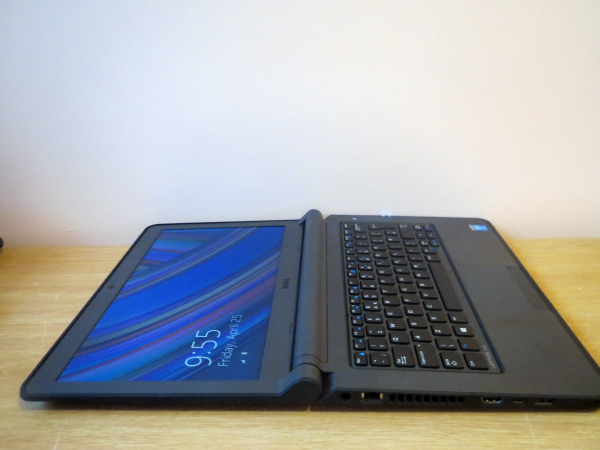 A severe lack of colour accuracy also hampers this screen’s work appeal. The average Delta E of 10.27 is bad, with further analysis revealing that it’s particularly poor when handling blues and blacks. The colour temperature is terrible, and 63.1% sRGB coverage is about what we’d expect from a cheaper notebook.

Viewing angles are bad, too: this screen may tilt, but you’ll have to be directly in front of the panel to make out what’s going on.

These results mean that this panel just isn’t suitable for any serious work. Gorilla Glass improves the panel’s strength – important in classrooms – but the lack of quality means this screen is only good enough to run Microsoft Office, web browsers and other basic software, and even then without a great deal of viewing comfort.

The Latitude is no media laptop, so that means poor speakers. Bass is almost entirely absent, and the mid-range lacks depth – music and games sound crushed together. The high-end is far too tinny. There’s a surprising amount of volume, but that doesn’t make this machine’s audio sound any better.