When Dell launched its new Canvas work surface yesterday, there were lots of questions about how it would work and who it’d be good for. Today, I came back to Dell’s CES 2017 booth to get hands-on and get some answers.

At its most basic, the Dell Canvas is a 27-inch touch screen monitor that can lie flat on your desk. You can draw on it with a stylus and use your fingers to interact with your work as well. However, Dell has made things a lot more interesting – and complicated – with the addition of custom hardware in the form of ‘totems’ and software for creating a Windows 10 workspace that’s just right for your needs.

The touch screen is a 2,560×1,440-pixel affair that can display 100% of the Adobe RGB colour gamut, meaning it’ll be able to display every colour a design professional will ask of it. This is hugely important for those working on photography, graphics and video work.

The included stylus and totems are powered by Wacom EMR technology, which is great news as Wacom holds a fairly handy advantage in the world of touchscreen technology. 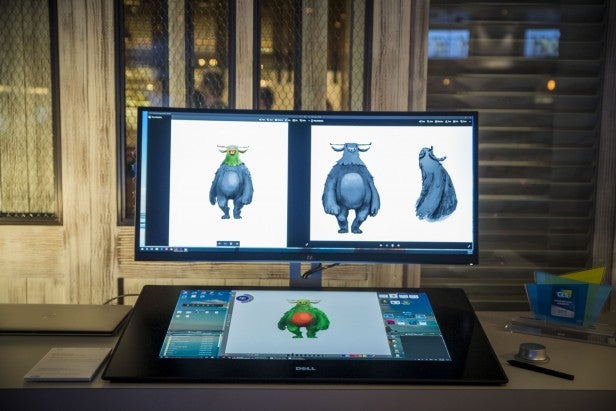 The totems are circular knobs that sit on the touch screen and can be pressed, turned and moved around. They’ll do all sorts of stuff depending on the software you’re using. In Sketchable, for example, you can use it to rotate items, change colours, undo edits and more. It takes a lot of getting used to, especially because the software driving it is very new, but for two-handed working without a keyboard and mouse, it feels quite natural.

The totems are very similar to the Microsoft Surface Dial that ships with the Surface Studio PC. In fact, a Dell representative told me that some of the software functions the Surface Dial was able to achieve were inspired and assisted by the work Dell did on its totems. Teamwork wins again. 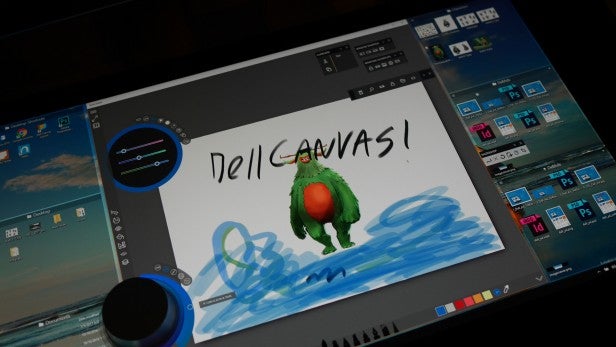 It’s the second, smaller totem (known as the ‘knob’) that sets the Canvas apart. Currently there aren’t any applications that support a second totem, but Dell says it’s shipping the Canvas with two because the cost of the knob is relatively low. The company imagines the second totem to be used in applications with knob-like functions, such as audio editing suites.

There are problems with the early prototype totems. They slide down the screen if you let go of them and the on-screen graphics that appear around them don’t quite scale correctly. These are teething troubles and Dell says both will be solved by the time it ships in April.

On the software side, Dell says anything with a touch interface will work with the Canvas, but totem support is more limited. Companies including Avid, Sketchable, Cakewalk and Solidworks are all working on supporting both the Surface Dial and totems.

There’s more custom software. First, Dell will give users the option to install Fences by Stardock, which lets you organise your desktop in a much, much easier-to-use way than Windows 10. You can pin folders around your workspace and drag items in off the desktop into whatever program you’re using. Anyone working on loads of assets at any given moment should really like it. 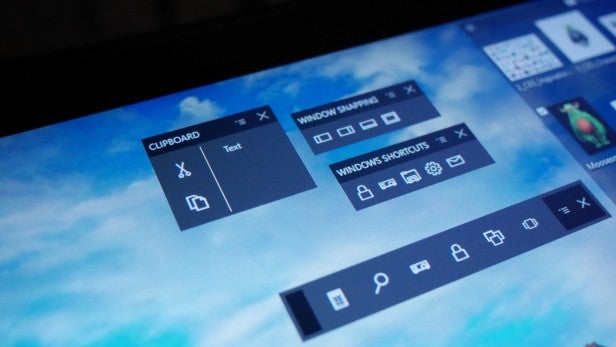 Second, Dell has developed its own brand-new software called Palette (above), which lets you create custom floating menus designed for touch operation. It doesn’t support many software packages right now, but I was shown it working with Photoshop. It also supports key combinations, so even if a program you use isn’t supported, you can set up keyboard emulation for every function that has a keyboard shortcut. 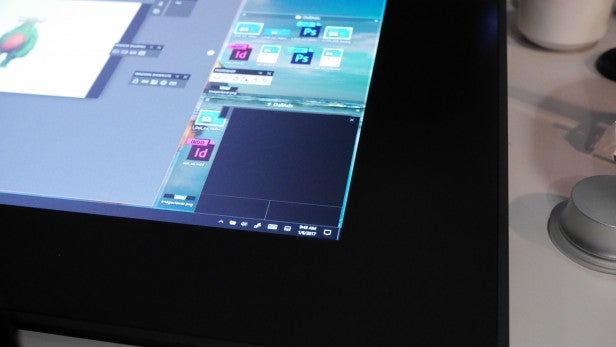 The Canvas will also benefit from the Windows 10 Creators Update. In addition to behind-the-scenes updates, Creators will also feature a virtual touchpad (above), which will be handy if you’re working on a second monitor and want to move things around without having to reach for a real-world mouse.

It’s early days for the Dell Canvas, and the firm has both hardware and software quirks to iron out. The Canvas is exceptionally clever, though, and I think it’ll prove to be a popular alternative to the Surface Studio for people who already have high-end workstation laptops and desktops.

It’ll be available for pre-order in March for $1,799 and will ship in April.