No-one ever expects zombies to wait their turn. They drag their feet, they claw at your face, they slobber as their mouths edge towards your neck, but rarely to they give you the time to get away.

The zombies in Dead Eyes, however, are much more orderly, much more civilized than your average beastie. Yes, they still want to feast on your flesh and drag your bloody entrails around the streets, but they only want to do so once they’ve given you a chance to get away first. There’s far less satisfaction in a kill if you’re only victorious because your foe was a bit too heavy on their feet, after all.

Make no mistake, however, the blood thirsty foe that dominate each and every one of Dead Eyes’ 80 plus levels are in no way easy to combat. This is a game of wrong moves, of painful no way outs, of being pursued. Hunted. Trapped. Scared. Yet, the zombies in Dead Eyes don’t really matter at all – like a particularly competitive game of chess, the pieces involved are actually mere dressing: this is all about predicting the moves of your opponent and tricking them into letting you through accordingly. 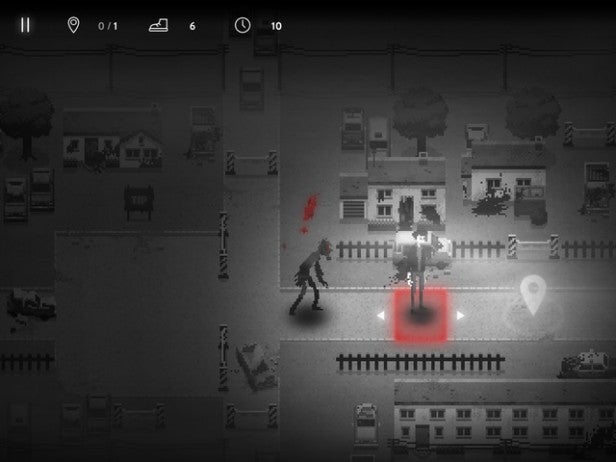 Comparisons with chess certainly aren’t misplaced, either. Playing out on a series of grid-like levels (where, more often than not, your routes to the exit are narrowed down to just a couple of pathways thanks to some detailed level architecture that help set the scene), your basic goal is to get to the other side of the stage, with the premise being you’re on the hunt for supplies in the midst of a zombie apocalypse.

Doing so without dying, however, will only win you one star. To get all three, there are two other bonus goals you’re encouraged to hit, such as reaching the exit within a set amount of time or a limited number of moves, picking up pre-defined objects or even rescuing the fellow uninfected on route. It’s moving about, however, that’s the most important element of play. Patrolling every level are a series of different zombies, each of which behave in a slightly different way. Some move around the stage almost freely, others patrol set areas, and the creepiest of all are those crawling along the ground, only their arms and head visible above the surface. 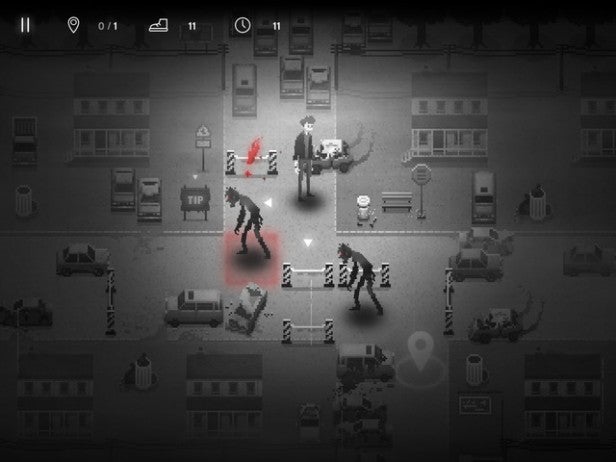 Learning how all of these types of zombies behave is crucial to making it to the other side, with each one making one move at the same time you do. Often Dead Eyes will try and encourage you to sneak on by unnoticed, but in most of the stages, being pursued is either unavoidable or down right encouraged. Indeed, it’s only possible to get to some exits by attracting the attention of your would-be diner in order to interrupt his usual routine.

This is where things get interesting. With only a limited number of grid squares to move into (and not moving simple not being an option), it’s entirely possible you’ll work yourself into a corner you simply can’t get out of alive, often out of blind panic. As soon as your spotted, the game indicates the grid square you were seen on my flashing it red. Your enemy will then head in that direction, chasing you until they lose sight, with a change in Dead Eyes’ soundtrack further emphasising your likely doom. 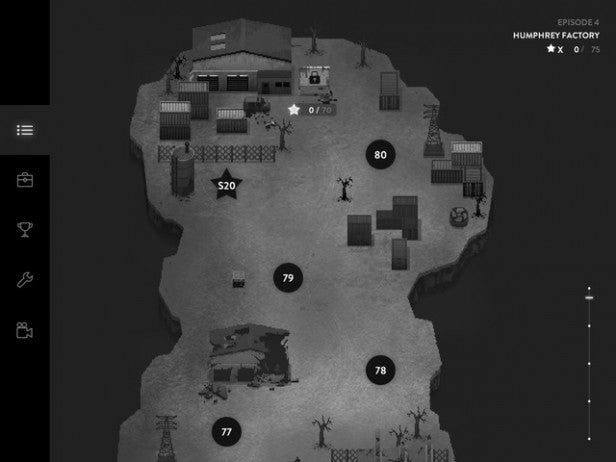 It’s understanding that simply keeping to the safe path isn’t an option that’s the game’s big challenge. Often you’ll learn (after many failed attempts) that the only way through a pack of zombies is to cut right through the middle of each other, causing them to bump into each other and buy a bit of time. From then on, things get a little more straightforward, with your ability to control the constant drive in your head to stay away from danger ultimately determining your fate.

That’s what really stands out about Dead Eyes. Yes, the greyed out pixel art style is slick and the zombies that patrol its stages are genuinely a little bit chilling when they set their sights on you, but in reality this is a simple move-by-move puzzler where all thought of just what you’re taking on has to be put aside, because it’s the dread and confusion your foe triggers that causes you to make the wrong move. 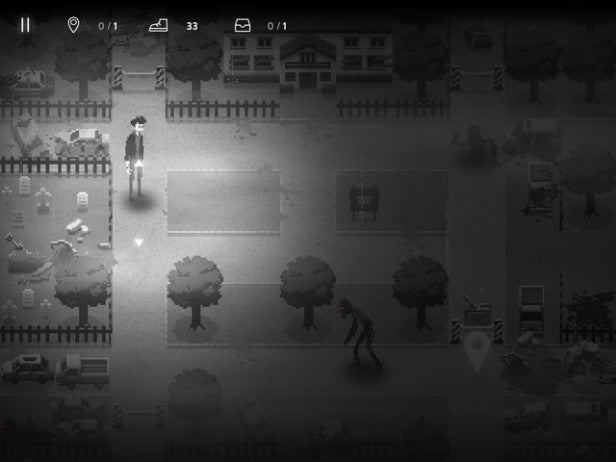 It’s fear you never really want to conquer, however. Dead Eyes’ cast of the undead may only be pawns in this elaborate board game on a practical level, but they add so much in terms of atmosphere that this would only be half the game it is without them. This may be the first ever case of a pack of zombies that actually set out to give something life, rather than simply draining it away.

Verdict
On a practical level it may be a simple turned based board game, but Dead Eyes’ delivers far more in practice, serving up a stark and unnerving take on a zombie infested planet Earth, complete with a wide variety of undead who track your every move with fearful intensity.