It may not surprise you to know that physics-based games – of which Day of the Viking is one – are nothing new on the App Store. Even before Rovio had rolled the world over with Angry Birds, games where physics are either your tool or your enemy were fairly commonplace on iOS.

It’s not hard to understand why, either. Developers quickly realised that, when it came to devices devoid of buttons but with the addition of touchscreens and accelerometers, the physics genre was one of the few that didn’t involve any compromises. In fact, as anyone who has suffered Angry Birds on console will attest, they positively play better on smartphones than they do any other platform.

Odd, then, that when it comes one of the most crucial elements of any physics-based game – the ability to aim – Day of the Viking stumbles a little. 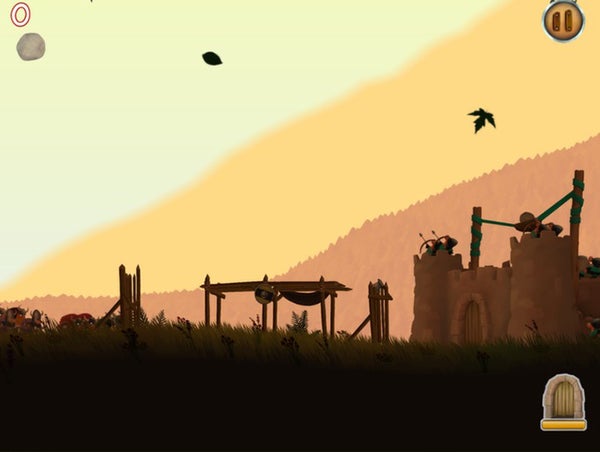 As with all Adult Swim releases, one thing Day of the Viking isn’t short of is character. You’re charged with protecting a princess in residence in her castle from attack, using the guards mounting the walls of the fortress to fight off the approaching hoards of vikings. Initially, doing so is a case of making use of the two tools at your disposal – a collection of archers and a rather large slingshot, capable of pelting huge rocks.

The idea is simple. Firing from the right hand side of the screen towards the approaching enemy on the left, you have to kill each and every single viking before they hammer to door to the castle down by splitting them in half with arrows or straight up flattening them with boulders. As you might expect, the longer you play, the more difficult each round becomes, with the vikings themselves mixing up their game – rogue heavyweights, bands that approach at pace, veritable behemoths all causing you to change your approach. 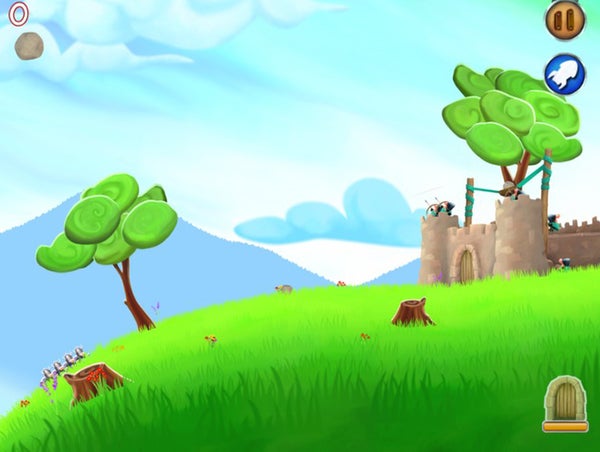 Of course, Day of the Viking plays fair: the better you perform in each stage (according to targets set out before the level begins), the more stars you’re awarded – stars which you can then use either to upgrade your defences or unlock temporary bonuses that can, and often do, save the day when the enemies begin to amass. As you’d expect, however, Day of the Viking never lets you get all too comfortable – just as you begin to bolster your men, so the enemy starts to get clever, hiding behind wooden shelters that are (initially at least) immune to your attacks.

This makes success a question of timing just as much as aim, choosing to attack when your foe is dashing between cover and exposed, though, as aforementioned, it’s the aim that lets Day of the Viking down somewhat.

While firing arrows is easy enough (simply tapping your target on the end causes them to be taken out), firing the boulders involves pulling back the slingshot in Angry Birds style and letting go. The game only gives a very slight indication of where the boulder will head, however, and the sheer weight of it means that you either shoot it like a bowling ball – taking your enemies’ legs from underneath them – or high, high up on the air, so it falls back to earth like a meteor. Neither, however, is an especially accurate art, and all too often it feels like failure is simply a case of the game not playing fair rather than a lack of skill. 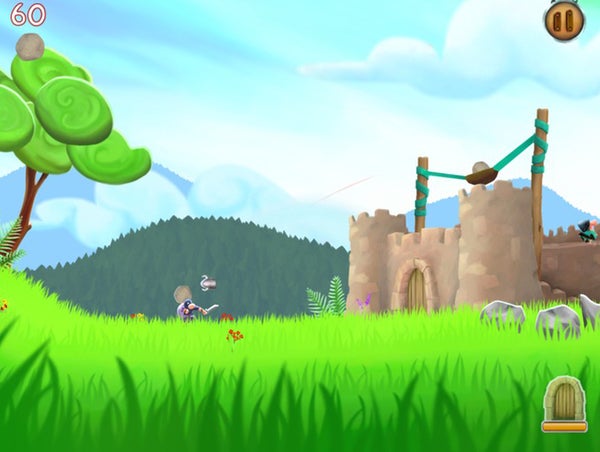 Also, whether intended or not, flipping between the two different control methods – tapping and pulling back on the slingshot – is quite an ordeal, making it all too tempting to simply focus on one or the other, usually failing to protect the princess in the process. It may well be that Adult Swim would claim this is simply the difficulty of Day of the Viking in action, but crucially, it fundamentally undermines the feeling of sweet satisfaction that should accompany every strike against the enemy – often a direct hit feels more like luck that skill.

Still, there’s no denying that, in the moments where everything comes together, Day of the Viking is hectic hilarity defined. Adult Swim has definitely hit on something here: Day of the Viking doesn’t attempt to reinvent the wheel, but its simplicity in delivery is what ensures the few lumps and bumps the developer would be well advised to iron out don’t sour what is, on the whole, a physics fiesta.

Verdict
Some slightly dodgy aiming aside, Day of the Viking is an entertaining revisit to a physics genre still dominated by the unassailable Angry Birds. With a gradual learning curve on offer and trinkets aplenty to collect, its two batches of levels – with more to follow – should keep anyone looking for a quick fix of physics fun entertained for the foreseeable.