The flexible SLC caching helps the MX200 deliver some better benchmark results than its predecessor. Its sequential read and write speeds in AS SSD sat at 523MB/s and 478MB/s – the former result is only 4MB/s better than the MX100, but the latter is almost 150MB/s quicker.

In small file tests, though, the MX200 wasn’t as consistent. In the 4K read test it matched the MX200, but it was 24MB/s behind when writing files. The MX200 was better in the 4K-64 tests – 20MB/s faster when reading, and almost 30MB/s quicker when writing.

These patterns were mirrored in the CrystalDiskMark tests. In sequential reads the MX200 barely beat its predecessor, but it was miles ahead in sequential writes. Those gaps were repeated in the 512KB benchmarks.

The Atto file tests measure performance across a broad range of file sizes, and the MX200 proved adept in almost every test. Its 8KB read speed of 185MB/s was two megabytes behind the MX100, but at 32KB it scored 368MB/s – ahead of the older driver. It beat the MX100 in every other read test, and topped out at 562MB/s, ten megabytes ahead of Crucial’s older hardware. Impressively, that’s only a couple of megabytes behind Samsung’s barnstorming 850 Pro.

In IOMeter’s longer-term test the MX200 wasn’t as impressive. Its all-in-one result of 2,126 IOs fell behind the 2,426 IOs scored by the MX100. It’s also around three times slower than Samsung’s market-leading drives. 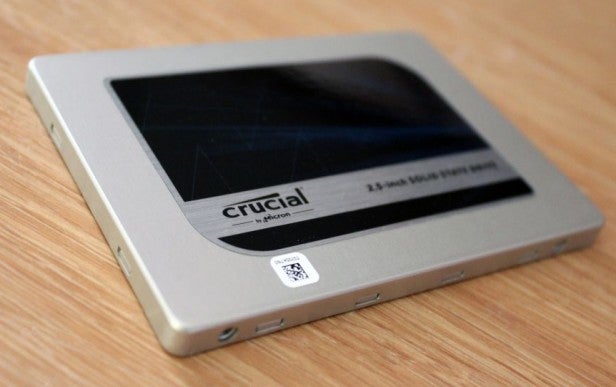 There’s no change to this drive’s warranty or box contents. Its three year coverage looks a little slim next to many other drives that provide five year deals. At least it’s a good-looking drive – all silver, with a Crucial sticker – and its 7mm form factor means it’ll fit into the slimmest spaces. The box contents haven’t changed, either, with a 9.5mm spacer included.

Several other MX200 capacities are available. The smaller 128GB capacity isn’t supported, but you can pay £170 for a 500GB version and £362 for a 1TB drive. The MX200 is also manufactured in different form factors: the 250GB model we’ve reviewed is available in M.2 and mSATA formats and remains at £90.

It’s no surprise that the MX200 wasn’t consistently faster than its predecessor – with the same hardware inside and a new caching system providing extra grunt, there’s just not enough on offer to provide a huge leap in performance.

The MX200 was a little quicker in many of our file-reading tests, though, and it improved dramatically in file writing tests – enough to eliminate slow speeds that had been the MX100’s biggest weakness.

The speed improvements are paired with better endurance ratings, and the improved MX200 only costs £10 more than the previous drive. That’s a price we’re willing to pay for performance and endurance boosts.

Take a look at our review of the new Nvidia GeForce GTX 960, or discover 2015’s best laptops

Crucial’s blend of old hardware and new features pays off in many of our benchmarks – it’s a little faster when reading files, and much quicker in several key file write tests. The MX200 has a better endurance rating, too, and comes with the same three-year warranty. The MX100 remains decent and a cheaper option, but the £90 MX200 is now our favourite budget SSD.