A couple of years ago I reviewed the Creative HN-700 noise cancelling headphones, which proved to be revolutionary. It wasn’t the active noise cancelling that was revolutionary, rather the fact that Creative had brought the technology to market at a fraction of the price asked by its competitors. The sound quality wasn’t outstanding, but these headphones did a great job of blocking out the drone of the engines on a plane, or the rumble of a train without costing the earth. This time Creative isn’t going for the value market, and its Aurvana X-Fi noise cancelling headphones are up against some stiff competition from the likes of the Panasonic RP-HC500E-S and the Sennheiser PXC 450 sets. 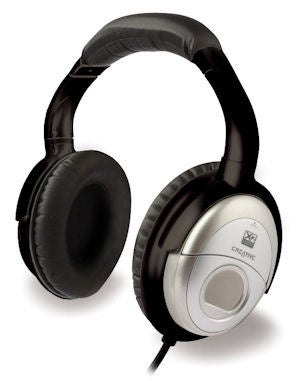 When Creative first told me about its X-Fi Crystalizer technology I was sceptical to say the least. When the X-Fi soundcards first hit the streets Creative made some bold claims that MP3 files could sound better than the original CD thanks to X-Fi Crystalizer technology. This is, of course, nonsense. A compressed audio file using a lossy codec is never going to sound better than the original CD that it was ripped from, simple as that. However, what the X-Fi Crystaliser did do was try to smooth out digital music that had been encoded at less than generous bit rates.


Obviously Crystalizer can’t actually replace data that has been removed during compression, but there’s no denying that it creates a fuller sound from poorly encoded files. At its most basic level, Crystalizer emphasises the low frequencies to give the music more weight and coherence, which should appeal to the average listener who tends to value bass over clarity. And anyone who is looking for ultimate clarity and fidelity probably wouldn’t consider active noise cancelling headphones anyway. So, having the Crystaliser technology built into these headphones adds a real benefit, and if you don’t like the effect, you can simply turn it off. 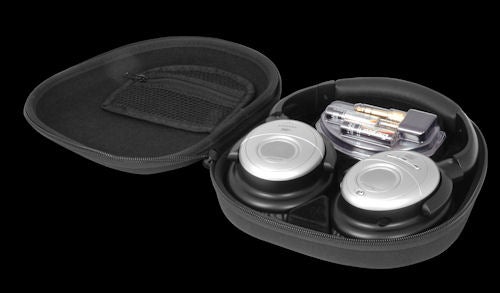 The second X-Fi technology to find itself integrated into these headphones is CMSS-3D, which creates a virtual 3D soundstage. I’m not the biggest fan of virtual surround sound systems, but even I’ll admit that it’s handy to have it built into headphones, especially when you’re watching movies on a plane. There’s no denying that the CMSS-3D creates a wider sound stage that works well when watching movies, and even to a certain degree when listening to music. I found that some music benefited from CMSS-3D and its wider placement of instruments and effects, but some music lost its sense of cohesion as a result, almost like various members of the band were positioned in different rooms rather than together. Once again though, CMSS-3D can be activated or deactivated at the touch of a button, so it’s up to the listener whether they want to use it.

When it comes to the active noise cancelling, the Aurvana X-Fi headphones are light years ahead of the HN-700s that I reviewed back in 2005, as I’d expect them to be. Creative gave me this particular set while I was out at CES last week, which meant that I had a nine hour flight home from Las Vegas to audition them, and I have to say that they performed admirably during the entire journey. The noise cancelling is very effective, dispelling the vast majority of ambient engine noise on a plane, while achieving similar results in an office environment with air conditioners and loud PCs. Unlike many active noise cancelling headphones I’ve used, the Aurvana X-Fis don’t leave the sound noticeably muffled. There is a slight flattening to music, but the CMSS-3D counteracts this convincingly. 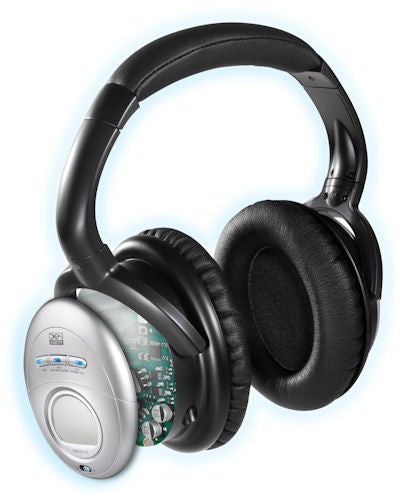 Watching movies on a plane is never going to result in the kind of atmosphere that the director was shooting for, but it’s not just the small screen that’s the problem, the poor audio also makes it a far less immersive experience than it should be. I watched 30 Days of Night, which is a surprisingly fresh take on the vampire genre, not unlike the excellent Near Dark from yesteryear. A movie like this really needs the viewer to be immersed in the proceedings and sound plays a big part in that equation. Here the Aurvana X-Fi headphones excelled, dispelling all the distracting ambient noise, while the CMSS-3D gave far more depth to the soundtrack, even creating a sense of spatial awareness to each scene.


When it came to listening to music, the Aurvana X-Fis gave a very good account of themselves. With the active noise cancelling enabled, there was no need to push the volume up too high, and as already mentioned, the sound quality didn’t suffer too much from the muffling effect that afflicts some noise cancelling headphones. For absolute clarity and fidelity I’d probably still be tempted to plug my Shure E500s in, which also do a great job of shutting out the ambient noise in a plane. Arguably the Creative Aurvana’s are more comfortable to wear for hours on end, and I’ll admit to being literally deafened on a plane when I had my Shures plugged into the sound system and the stewardess made an announcement, although I really should have been using an attenuator! It’s also worth remembering that the Shure E500s are about twice the price of the Aurvana X-Fis.

Design wise, the Aurvana X-Fis look good, with a wide, solid headband that easily adjusts – the adjustment doesn’t slip too easily either, which is something I’ve encountered with other over the ear headphones. There’s a good degree of padding on the top of the headband keeping things comfortable on the top of your head, while the padding around each ear cup is also plentiful. I found the size and shape of the ear cups just about perfect – they covered my ears completely, without putting any undue pressure on the soft tissue around the edges of my ears. As already mentioned, I wore these headphones for the best part of nine hours without being caused any discomfort. 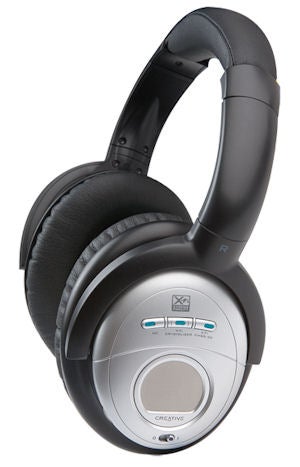 The left cup hides the battery compartment, which is always a preferable design to having a battery holder hanging from the cable. Talking of the cable, it’s a completely detachable design, and Creative bundles two cables in the box so you can add an extension, depending on how far away you are from your source device. It’s also worth mentioning that the plug at the end of the cable is tapered, so it will fit into the iPhone’s awkwardly slim socket.


On the right cup there’s an analogue volume wheel, which is handy if your source device is out of reach. There’s a sliding power switch, and then three toggle buttons for Noise Cancelling, X-Fi Crystalizer and X-Fi CMSS-3D – each of the three sound processing components can be activated separately or concurrently. The switch and all three buttons glow blue when active – will we ever see the end of blue LEDs?


The Aurvana X-Fi headphones come with a hard carry case, which although reasonably large, is fairly slim and should fit in your hand luggage. As well as the headphones and cables you get two AAA batteries to get you started, along with a double plug aeroplane adapter and a full size headphone jack adapter.


Battery life is pretty good – I managed to get over ten hours of use out of a single set of AAAs. And unlike the Bose noise cancelling headphones, these can be used even if you run out of battery power – albeit without the active noise cancelling and X-Fi features. 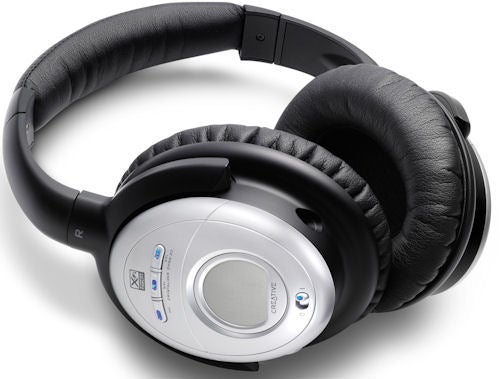 The Aurvana X-Fi headphones can be found on the street for around £139, which some may consider a lot of money for headphone, but considering the technology that Creative has squeezed into these, it really isn’t. This price places the Aurvanas well below popular noise cancelling headphones from Bose, while offering a greater range of features. If, like me, you spend a lot of time trapped in a flying pressurised cylinder, the Aurvana X-Fi headphones shouldn’t be considered a luxury, they’re a necessity.


I hate flying, I really do, but these headphones really did make the long flight home from Las Vegas considerably more bearable. The noise cancelling is impressive, while the X-Fi CMSS-3D works well when watching movies, helping to create an immersive experience and block out your surroundings. As with all active noise cancelling headphones, the sound quality isn’t going to appeal to an audiophile, but in an environment with excessive ambient noise you’ll be very happy to have them. Put simply, I won’t be getting on a plane without these headphones in my hand luggage.