Noise: it’s a fact of modern city life. You go to work: it’s noisy on the train. You get to work: the phones are constantly ringing and the air conditioning is always on. You go on a business trip: you’re assaulted by the constant roar of your plane on the way there and back. And finally, when you get home, you’ve the all sorts of background chatter to content with, from neighbours doing DIY at ungodly hours to the constant hum of the boiler.


Excess noise batters our poor old eardrums from every conceivable angle, and it’s hard to get away from it unless you regularly haul yourself out of bed at four in the morning. So it’s nice, from time to time to take refuge, from the clatter and clang of everyday life, block it all out seal yourself into a world of your own. It’s something that noise-cancelling headphones like Panasonic’s latest RP-HC500 headphones do brilliantly – they allow you to listen to your own music but without having to turn the volume up and compete with the outside world. 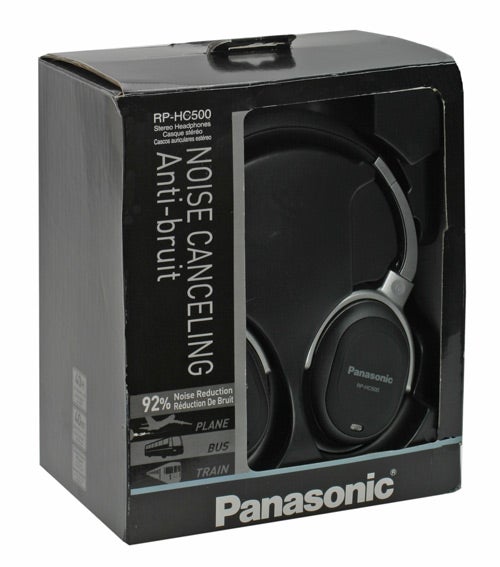 I’m a big fan of the type of noise-blocking earphones that go deep down in your ear canal and create a physical seal – but they’re not for everyone. Some people just can’t get comfortable with stuffing little bits of plastic down their lugholes, and for these types, external headphones – either supra or circumaural in design – active noise cancelling is the only way to go.


This is what these new Panasonic headphones use, and its a similar technology to that employed by Sennheiser’s top-end PXC-450 headphones I reviewed earlier this year. It works by monitoring external noise with microphones and countering that with ‘anti-noise’ or phase-inverted noise inside the headphones. 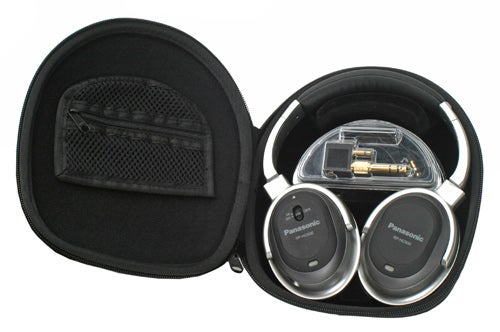 The result, at least with these Panasonics, is very impressive indeed. I tested them on the noisy London Underground (a recent survey found that sound levels were in some parts louder than a jet taking off at Heathrow Airport) and found that I was able to listen to gentle classical music and jazz without having to turn the volume right up. To see how much noise they’d cancel I turned the music off and stood next to a six-lane A-road in rush hour – the incredibly busy A406 in north-east London – and I was immediately impressed with the large amount of low rumble and wooshing traffic noise that the RP-HC500s suppressed. The technology can’t quite cut out the very high frequency noises, but it will effectively take the edge of everything else.

I happened to have a pair of Sennheiser’s PXC-350 headphones to compare them with – a slightly less expensive version of the PXC-450s, but nevertheless still quite pricey at around the £150 mark – and found the noise cancelling signal to be both more effective and less-intrusive on the Panasonic headphones. Flip the switch and you can hear very faint hiss, but it’s not as loud as the hiss on the PXC-350s, and sound appears to be deadened a touch more effectively with the Panasonics too.


This isn’t the only area where these Panasonic headphones match or better the Sennheisers, though. They’re just as well made and comfortable to wear: if you’re expecting plasticky build quality – and you might expect it for a pair of noise-cancellers under 120 quid – you’re well wide of the mark. The earcups are wrapped in luxurious soft leather, as is the middle portion of the top of the headband, while the hinges and headband appear all to be made of hard-wearing metal.


Battery life is very impressive. The RP-HC500s take a single AAA battery, which slots into the left earcup, and this provides a quoted 40 hours of listening. Compared to the PXC-350s, which takes two AAAs and has the same quoted battery life that’s a big bonus. 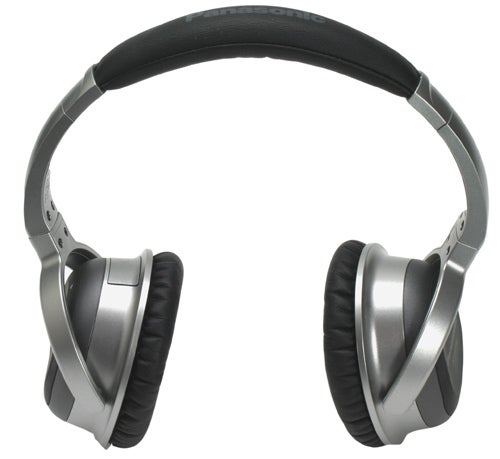 The RP-HC500s are also a lost less bulky and much more portable than the Sennheiser PXCs. They fold in a similar way, allowing you to stow them flat in the soft shell case provided with them and they come with a flight adaptor plug enabling you to plug them in while you’re up in the air, but their lower profile makes you look a lot less of a git while listening to them, and the smaller circumference of the cups help achieve a snugger fit than with either of the bigger Sennheiser models. The downside to this is that to achieve this effect the small earcups won’t fit everyone’s ears though, and those with larger lugs will have to look elsewhere.


But it would be a great shame if you missed out on these because of your FA Cup handles, because the audio performance from these relatively cheap noise cancelling phones is pretty damned good. Compared to the PXC 350s, the clarity and balance isn’t as good and the bass isn’t as well defined. But they’re a perfectly acceptable listen, and for just £115, arguably offer more for your money.


What I really liked about them was that they lacked the boxy, enclosed sound that so often afflicts closed back headphones. With the noise cancelling turned on there’s almost an in-ear headphone sort of sound that comes out of the RP-HC500s, though you really don’t want to switch the cancelling off. If you do, it sounds a bit like you’re listening to music in a bucket … at the bottom of the sea, with seaweed in your ears.

There’s plenty of well-defined bass here as well as a balanced mid-range and decent top end too. Play Bob Dylan’s Modern Times and you’ll find the bluegrass-influenced music on his latest disc is delivered with a great sense of energy and fun; Someday Baby really motors along. Switching over to the Sennheiser PXC-350s and you can see where your extra cash goes: the music simply sounds more real, with better clarity, realism and a better sense of airiness and space to go along with all that verve. But the RP-HC500s are still hugely impressive for the money.


As with the Sennheiser’s, the Panasonics lack gut-rumbling, fat-sounding bass that non-noise cancelling external headphones are capable of delivering. This isn’t apparent on acoustic tracks such as the soundtrack from Gladiator or the jazz on Lisa Ekdahl’s superb Back To Earth album, where the full range of the orchestra and double bass are reproduced extremely effectively. But as soon as you turn on something with artificially low notes they become noticeably lacking. I turned to Jamiroquai’s Black Capricorn Day, from the album Synkronized – a track I always turn to, to demonstrate audio equipment’s bass capabilities – and found there just isn’t the same grunt with the RP-HC500s as you get with a good pair of in-ear canal phones or normal external phones. 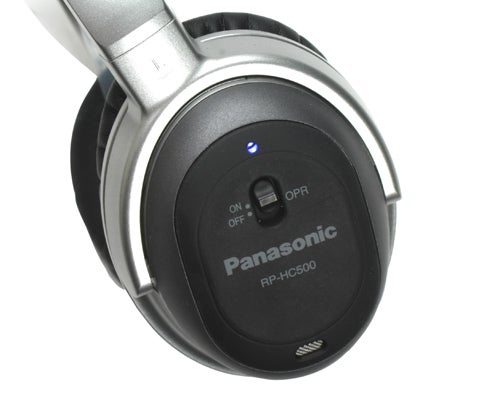 But back to the good stuff, and it’s worth pointing out that a low impedance rating of 32ohms seems to contribute to an ability to produce much louder top volume levels with smaller, lower powered MP3 players with than the more expensive Sennheiser headphones, which are rated at 150ohms. I tried them with a variety of players, from the Sansa Clip to the Trekstor Vibez and found that, coupled with the noise cancelling, I was rarely tempted to turn the volume up the three quarters mark on any of the players.


All round, I’d say Panasonic’s first foray into the noise-cancelling headphones market is a pretty successful one. Its RP-HC500 headphones are nicely made, comfortable and (for circumaural headphones) are pretty portable.


Moreover, for the sort of money we’re talking they sound very, very good and the noise cancelling works brilliantly without being over-intrusive. They can’t quite match the best that Sennheiser has to offer in terms of sound quality, and sound quality is pretty nasty once the battery dies, but if these are anything to go by, the German manufacturer is going to have to up its game, because the RP-HC500s offer very good value for money.