Video Studio Pro X2 isn’t the first version of VideoStudio to come out since Corel bought Ulead in 2006, but it is the first to have the full Corel branding. It has lost its version number too. By rights, this should be VideoStudio 12, but instead it has trendily been renamed X2. Instead of the standard and Plus versions, some parts of the world now get standard and Pro. But here in the UK there are just two versions of Pro, a basic one and an Ultimate edition.


Both of these iterations include the same application at their core, but Ultimate comes with a richer software bundle. In the past, Ulead has told us it sold vastly more copies of the higher-end Ulead VideoStudio Plus in the UK, so it has clearly stopped selling the lesser edition and both options are now essentially the new version of Plus. This means that either version supports HD all the way from capture to output, including AVCHD import and Blu-ray burning. 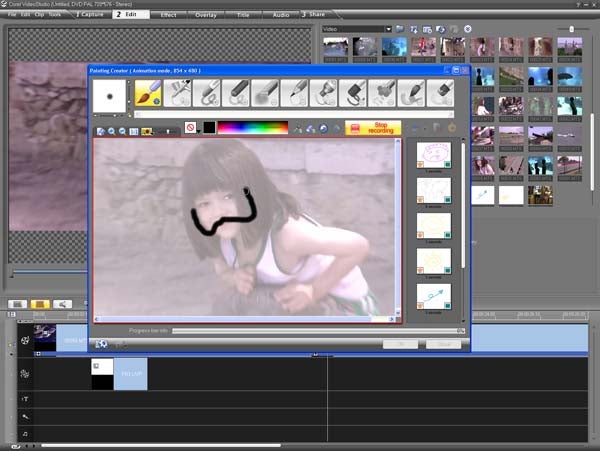 ”’(centre)The new Painting Creator tool lets you record animated drawing, which has the potential to be a lot of fun.(/centre)”’

So the choice between the versions depends on how useful you will find the extra apps included with Ultimate. The non-Ultimate VideoStudio Pro X2 only bundles WinDVD 8 Silver, which doesn’t support Blu-ray playback. But Ultimate comes with WinDVD 9 Plus Blu-ray, which can play Blu-ray discs – the clue is in the name. Ultimate also includes Steinberg WaveLab LE 6 for audio editing and DVD Copy 6 Plus, for disc copying and conversion. Although there is £20 between regular and Ultimate RRPs, we’ve found the difference in street prices is currently just £7, making it a clear choice which version is best value.


That, of course, is assuming you want VideoStudio Pro X2 in the first place. So what new enticements has Corel included in this version to ensure that you do? Most of the new features are minor improvements rather than major sea changes. You can now add transitions to all video tracks, rather than just the main one. High-end video editing apps, and Adobe Premiere Elements, have had this ability for years, and it is very welcome in VideoStudio. You still only get six overlay tracks, but that will be more than enough. VideoStudio still keeps its titling tracks separate from its video ones, but the maximum is now two rather than one, allowing blended text animations.

However, VideoStudio Pro X2 does have one big new capability. It’s called Painting Creator, and is a mini cut-down version of capabilities usually found in high-end compositing apps like Adobe After Effects and discreet Commotion. You get a selection of simple painting tools, including a regular brush and airbrush, crayon, charcoal, marker pen, and even a particle tool. You can draw static images with these tools, but the fun really starts when you press the record button. Then your painting strokes are captured as a macro, which you can play back, edit and augment. 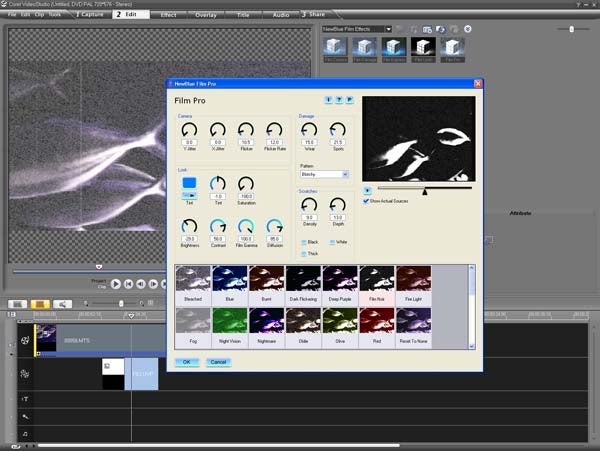 When you have finished your paint animation, the macro is rendered out as a video file which is added to the video media library. You can then drag this to the timeline like any video file. Transparency is added automatically, so you can superimpose the files over still images or moving video. However, you can’t directly edit these painting animations once they are rendered. They will need to be redone and re-rendered, although the Painting Creator applet does save each macro you record automatically, so you don’t have to begin from scratch.


Painting Creator is quite limited in features. Brushes can only be round or oval, although you can use one of 38 different texture options. You can also choose a single colour or still image as a background, rather than simple transparency. So Painting Creator has lots of potential for video fun – such as animated map annotations. No other video editing app at this price has a tool quite like it. 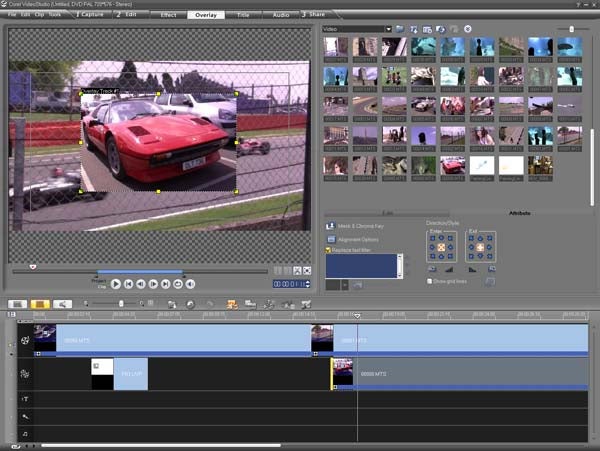 So that’s the biggest innovation in VideoStudio Pro X2. The remainder of the additions are far smaller, but still useful nonetheless. You can add animation to your still image slideshows automatically with the Auto Pan & Zoom function. You can either apply this to a single image by right clicking on it, or select a whole series to animate multiple stills at once. The library of overlay graphics has been extended with 15 new Flash animations and 20 new object and frame combinations.


The only new filters of any note come in the shape of a bundle from NewBlue. This consists of five film-look presets, which produce much more professional results than the Old Film filter provided before (which is still available if required). There are numerous customisation options available for each preset, too, further extending the different effects you can create, such as shaky hand-cranked cameras. Or you can tweak the manual parameters.

Unlike Premiere Elements 7, Corel VideoStudio Pro X2 feels quite languid with native Full HD AVCHD footage, even on a fast quad-core PC with 4GB of RAM. The software does have a solution to this problem, however, in the form of its Smart Proxy system. This renders a low-resolution working file to take the onus off real-time rendering. We found this to be very effective, allowing the blending of multiple tracks of AVCHD. The only downside is you have to wait a little for each proxy to be made, although this is performed in the background so you can get on with things whilst it happens. 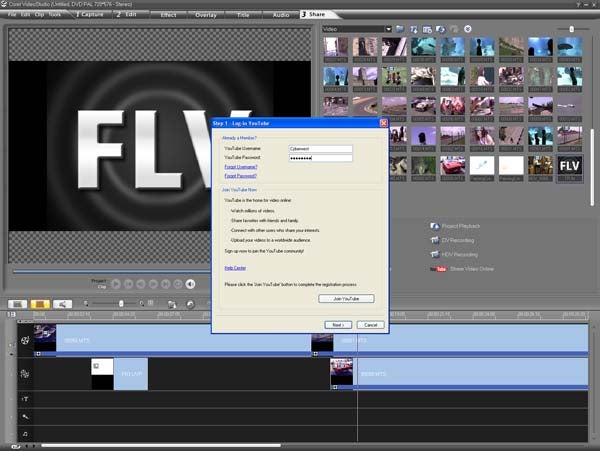 ”’(centre)Neptune Mediashare output has been removed, but direct output to YouTube has been added instead.(/centre)”’

That about wraps up the new and improved features of VideoStudio Pro X2, as very little has changed at the output stage. The HD-DVD option has disappeared, for obvious reasons. You can also no longer output directly to Neptune Mediashare, but this is no loss now either. It may have been ahead of its time – VideoStudio was the first editing app to offer direct upload to the Web, via Neptune, back in 2004. But this paid-for service has been superseded by the likes of YouTube, and now VideoStudio offers direct upload of properly encoded Flash Video files to this service directly from the editing timeline instead.


VideoStudio has always been a strong contender in budget PC video editing. It’s one of the big three, alongside Adobe Premiere Elements 7 and Pinnacle Studio 12. Both offer stiff competition. Pro X2’s Painting Creator is a particularly fun addition, and if you’re an existing user of VideoStudio this alone could make this version worth the upgrade. However, now that Adobe Premiere Elements 7 supports AVCHD at long last, its superior editing power overall just gives it the edge.