Pinnacle’s Studio has a long and chequered history, and now it has reached the grand old age of version 12. Where Adobe Premiere brought the filmstrip timeline to PC video editing software, Studio introduced the stage-based approach using tabs for each stage. So it quickly became a firm favourite with novice editors, and the tabbed stages have now been copied by most entry-level apps.


For a few years now, Pinnacle Studio has come in three versions – the basic one, Plus and Ultimate, with around £30 separating successive versions. The cheapest option misses out on support for any HD formats, including HDV and AVCHD. Naturally, this also means it can’t burn HD video to DVD or create Blu-ray discs. The Plus and Ultimate iterations add these abilities, plus multi-track layering so you can create picture-in-picture and chroma key effects. 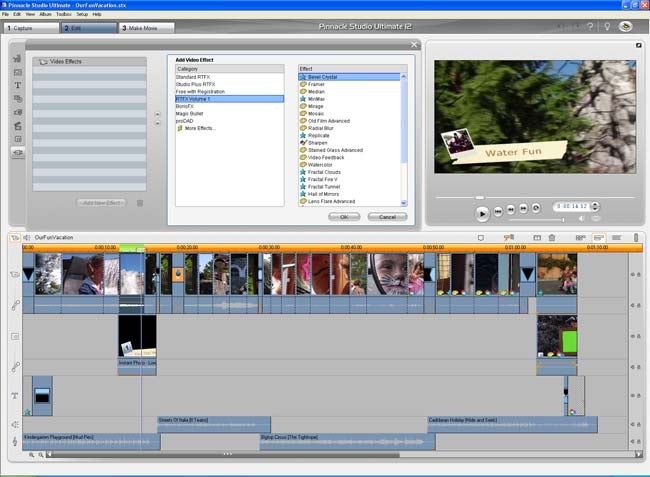 (centre)”’The Studio interface hasn’t changed much in the last few versions, but it was already one of the easiest for newcomers to use.”’(/centre)


The major difference between Plus and Ultimate is the bundle of extras. Ultimate comes with the Dolby Digital 5.1 encoding plug-in as standard. It also includes a selection of third-party apps, and this has changed slightly since version 11. You still get ProDAD VitaScene, but now Red Giant Software Magic Bullet Looks and Boris Graffiti have replaced BIAS SoundSoap and StageTools Moving Picture. If you upgrade from 11, you can still use these, but Pinnacle has obviously changed its relationships, as these are hardly like-for-like swaps. The other thing you still get in the Ultimate box is a square of greenscreen material, which in our experience is pretty good at its job, when lit properly. 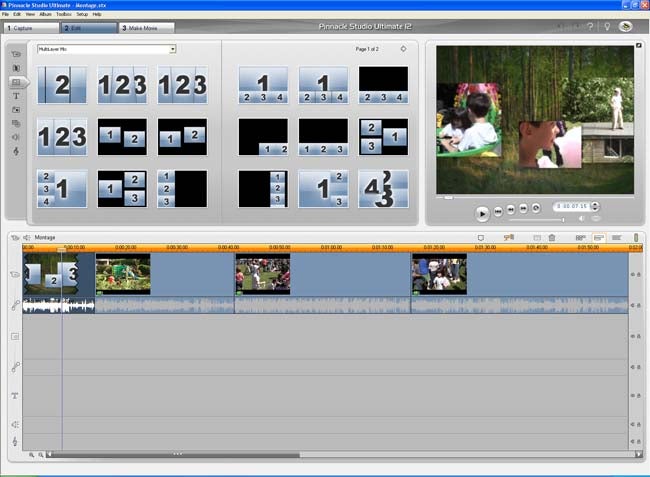 (centre)”’Pinnacle Montage blends up to six tracks of video into a multi-layer design, with a large library of presets available.”’(/centre)


There are some worthwhile new features in the core application, though. The headline act is the theme-based Pinnacle Montage, which uses preset designs to create multi-track effects with graphical elements. You choose a design from 11 different categories and drag it to the timeline. This then opens the Montage dialog, which provides up to six slots into which you can drag video clips and images from the library – with Photoshop PSDs now supported. These subsequently appear within the theme design as you scrub along the main timeline.


However, editing these subclips is a little complicated. You can alter the in point by simply clicking the left mouse button within the appropriate theme drop slot and dragging left or right. But if you want to make more elaborate edits and add filters, you need to copy the clip temporarily to the timeline, make your changes, then drag it back into its slot – which is all a bit clunky.

The basic Studio interface, now in its 12th incarnation, has been pretty static for a few years. The tabbed system divides the editing process into three stages – Capture, Edit and Make Movie – and each is subdivided with a further set of tabs down the side for different media and effects libraries or different tools. However, it’s still only possible to place one extra layer of video over the main one, which is why the Montage tool is a major new innovation, albeit constrained by its reliance on presets. For those who tend to stick to the readymade themes, Pinnacle has also added 27 new titles and 32 new DVD menus to the collection. 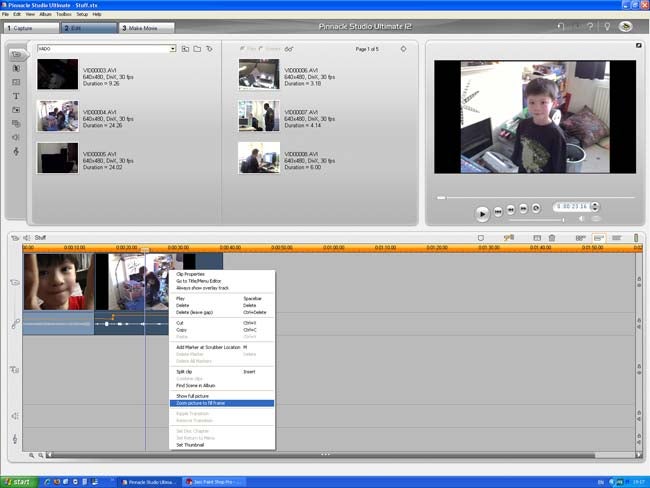 (centre)”’Studio 12 has a plethora of little interface enhancements, such as this one-click tool to magnify video so it fills the frame.”’(/centre)


The rest of the improvements have been aimed at tidying up the interface, and adding labour-saving widgets. For example, you can now get direct page access from the album by right-clicking and selecting a page number, instead of flipping through successive pages. This could be laborious with libraries containing many entries. If you’re combining footage with different aspect ratios in one project, there is now also a cropping tool – simply right-click on the clip on the timeline, and choose ‘Zoom picture to fill frame’. The clip will be magnified to fit, although you will lose some of the edges. Another potentially useful but minor new feature is the option to Find Image or Scene in Album. Right-click on a clip or digital photo on the timeline, select this menu entry, and the album will be opened with the clip or photo highlighted. 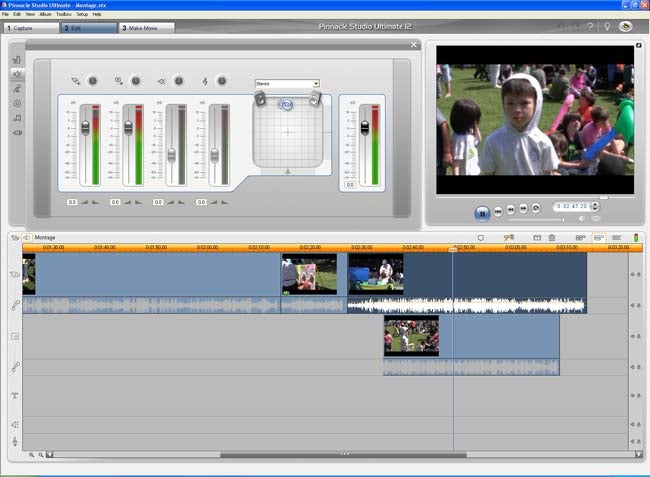 
The audio capabilities have historically been good in Studio, with 5.1 mixing available for some time. Studio 12 merely adds to the usability, with a master volume control in the audio mixer, and the ability to enter numerical values in dB for precise changes in volume. There are now peak indicators on all tracks within the audio mixer, and even a little indicator on the timeline, so you can monitor levels without the audio toolbox open. 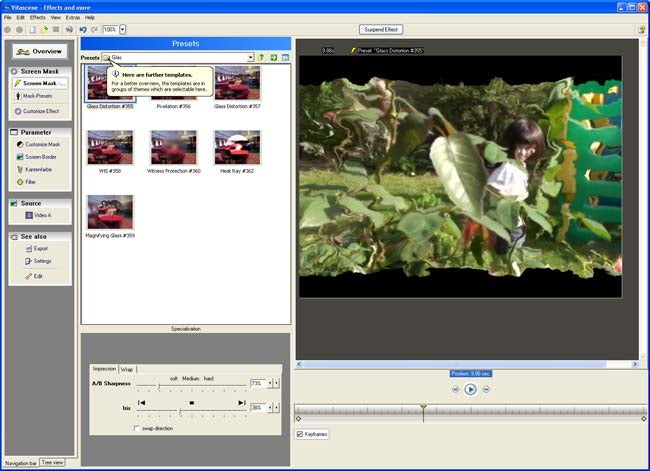 
As stated earlier, ProDAD VitaScene has been included with the Studio Ultimate bundle for a few versions now. This plug-in has its own interface for applying colour, lighting and texture effects to clips, and comes with a huge library of presets, but with numerous parameters available for customisation. Red Giant Software’s Magic Bullet Looks works similarly as a plug-in with its own interface, but it’s a very different one to the ProDAD software. The Looks come as a library of presets which mimic a plethora of film appearances, such as different types of black-and-white, or processes which will be familiar from music videos. Each one comes with a set of parameters, too, so the customisation options will be endless. 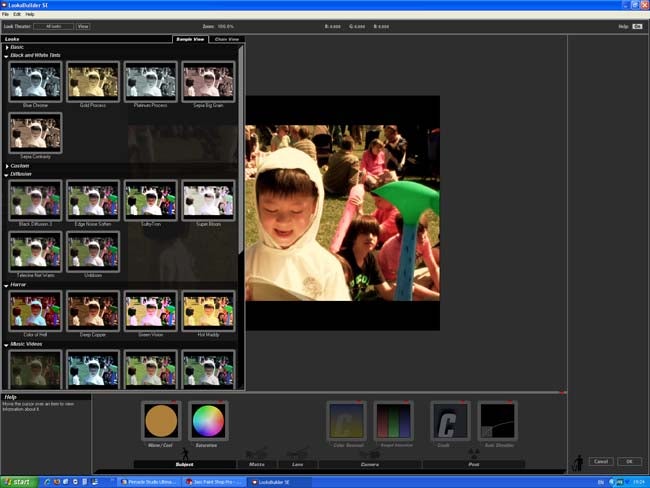 Boris Graffiti also acts as a plug-in with its own interface. But whereas VitaScene and Magic Bullet Looks provide different approaches to an overlapping range of appearances, Graffiti is a powerful titling app based on Boris FX’s now famous compositing engine. Studio already has commendable titling abilities, which are based on Pinnacle’s TitleDeko titler. However, although TitleDeko can create very attractive text, it’s very static and two-dimensional, whereas Graffiti has motion and effects control to compete with the likes of Adobe After Effects. Unfortunately, in Advanced Mode it also has a similar level of complexity, which will scare the daylights out of the average Pinnacle Studio user. So most people will stick with the basic interface, which uses presets with a simple little box into which you type your text. It also offers 2D and 3D charts, but here you will need to go Advanced to customise them, which will entail extensive reading of the help files. 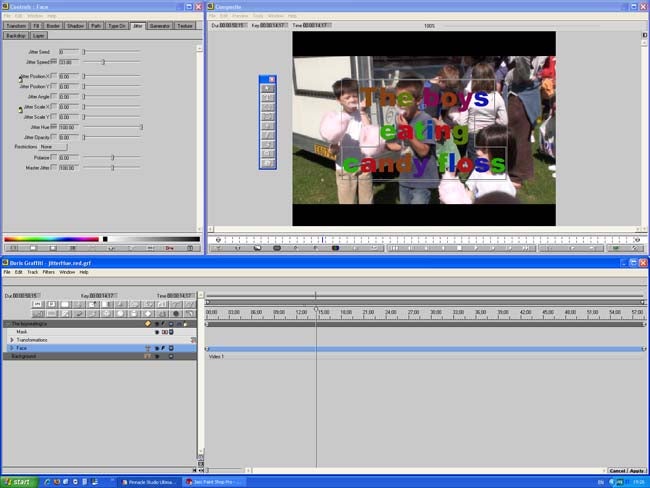 
Output options haven’t changed much since version 11. Blu-ray has sensibly been added to the disc burning selection now that HD-DVD, which Pinnacle previously backed, is pushing up the daisies. You can use MPEG-2 or AVC encoding, too, although not VC-1. Alternatively, if you want to upload your video to the Web, Yahoo! Video has been joined by YouTube – another sensible choice, considering the relative popularity of the two sites. There’s a new audio-only output option, supporting MP3 and WAV formats, plus the ability to encode to 3GP and Flash Video. 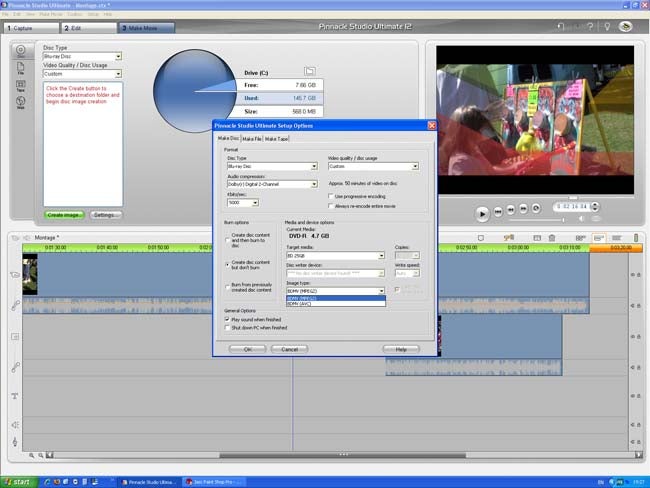 (centre)”’Studio Plus and Ultimate can burn to Blu-ray, with the option to encode in either MPEG-2 or AVC.”’(/centre)


When creating your output, Studio will pause export if the destination hard disk becomes full. This allows you to delete some files and carry on, rather than having to start all over again. You can also get Studio to play a noise or even shut down your PC when it has finished exporting, which is handy for those overnight encoding jobs. 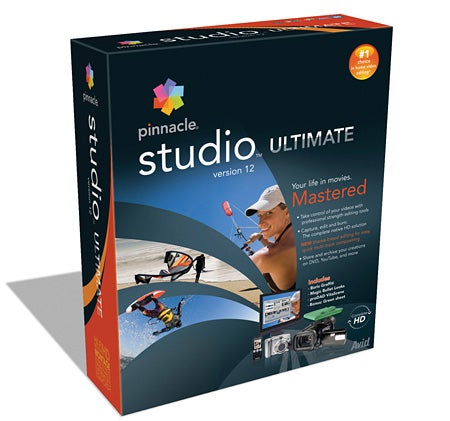 
As one of the most mature video editing apps around, Pinnacle Studio’s interface and core abilities haven’t changed much over the last few versions. The Montage tool is the most significant new feature in this release, with most improvements being minor ones allegedly requested by users. But Studio remains one of the easiest apps for new users to get to grips with, and the Plus and Ultimate versions have plenty of power under the hood for the more experienced. The continuing lack of more than one extra video track could be a drawback for some users, but otherwise Pinnacle Studio 12 is a comprehensive option for newcomers and seasoned Studio users alike.