What is the Canon PowerShot SX60 HS?

The Canon SX60 HS is a superzoom with an immense zoom range. The 65x zoom will make you feel as though you can spot life on other planets.

Looking at the numbers it’s hard not to be a little impressed. However, superzooms often care a bit too much about length, and not enough about quality and handling.

We do see a little bit of that neglect in the PowerShot SX60 HS. You could argue it’s common among traditional superzoom cameras, but the Canon’s £449 price is higher than much of the competition, which makes the shortcomings harder to swallow. 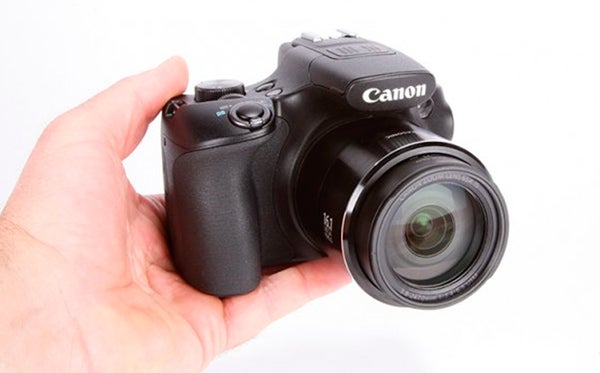 Like its predecessors, the Canon SX60 HS has a moulded plastic body that’s not too far off an entry-level DSLR in terms of style and frame. It’s large, but then a chunky body is required to offset the sheer size of the zoom lens when fully extended.

It feels robust, but not exactly expensive or high-end. For £449, the Canon SX60 HS is a rather basic-feeling camera. Canon’s tried to inject a slight sense of quality, though, by using aluminium for the outer part of the lens barrel. This is welcome, as this area will often be held or rested on something for a bit of extra stability. 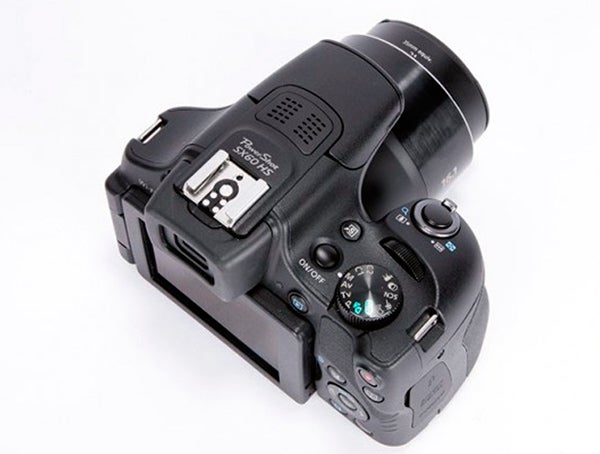 Handling-wise the Canon SX60 HS is pretty good. The grip is large and we found it easy enough to wrap a good three fingers around it, giving you a firm hold of the camera. It’s arguably far more necessary than it is for most entry-level DSLR shooters, who are unlikely to need to deal with as extended a zoom range as offered here.

That’s a fairly dramatic increase compared to last year’s SX50, which offered the equivalent of 24-1200mm. You get more in each direction here: wider when fully retracted, and more zoom, too.

A 65x zoom is likely to make a few jaws drop, and rightly so given that
it’s lengthier than most of the competition including the 60x Panasonic Lumix DMC-FZ72 and the 50x Fujifilm X-S1.

The Canon SX60 HS offers a pretty intense stabilisation designed to let you shoot through most of the zoom range handheld. Canon says it offers the equivalent of 3.5 stops of shutter speed. 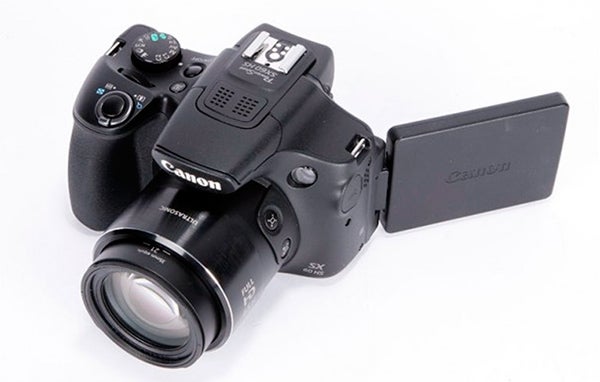 However, we found that at 1365mm – or anything close – you really need to use a tripod or monopod, or at least have somewhere to rest the camera for extra stability. Even if a fast shutter speed and the OIS are enough to keep photos sharp, it’s tricky just to keep your subject in the frame when shooting handheld.

Also, the maximum aperture of the Canon SX60 HS is just f/3.5-6.5. It’s quite slow, and both the cheaper Panasonic and Fujifilm rivals are faster, with f/2.8 maximum apertures. We’ll get onto the focusing and image quality effects of this later. But in short: don’t judge a lens simply by its magnification.

Next
Screen, EVF and Features Review