The Canon PIXMA TS305 is a cheap and cheerful printer that’s incredible value for money if (and only if) the only thing you want to do is print off copy. Fiddly controls and low photo quality make it less of a bargain in this regard, but for basic printing tasks it’s a great value buy.

The Canon PIXMA TS305 is a super-cheap printer that’s clearly aimed at those on a shoestring budget who want to be able to print off essays, questionnaires, posters, and the like.

In addition to being cheap to buy outright, it’s also quite economical to run, especially if you buy the larger-sized XL tanks. But what are the drawbacks of opting for such an affordable printer?

Design and Features – Simple looks and a clumsy app

The Canon PIXMA TS305 is a lightweight printer with a squat, wide profile. It measures 430 x 282 x 143mm and weighs a mere 2.9kg. While it’s not the most space-friendly printer, it’s light enough to be easily moved around.

Both the paper feed and out-tray fold out, so everything can be tucked away when the Canon PIXMA TS305’s not in use. Buttons and status lights are all located in one handy recessed unit on the left-hand side. It’s a shame that the top panel slopes downwards, otherwise this could conveniently double as a handy, if unorthodox chess board. 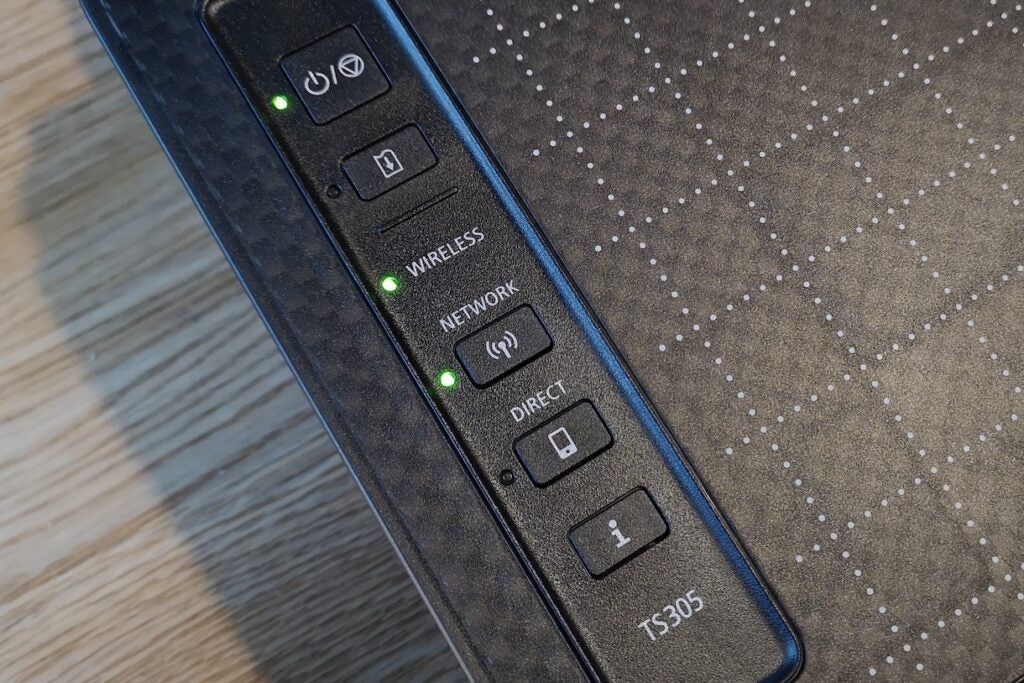 There’s little available in terms of ports on the back besides the expected Type-B USB port, and the port for the mains adapter.

Setting the Canon PIXMA TS305 up is relatively easy. Hook it up to the mains, pull the out-try down and extend it out, and then snap in the two cartridges. After that, you’re ready to get connected. Download the necessary drivers from Canon’s site to begin the setup process, or use the supplied Windows-only CD-ROM.

I actually struggled to get the Mac OS drivers for wireless printing to install directly from Canon’s site (likely due to them not being ready for Big Sur yet) and had to set everything up via our smartphone. However, I could issue print instructions wirelessly via Google Cloud Print and Apple AirPrint. 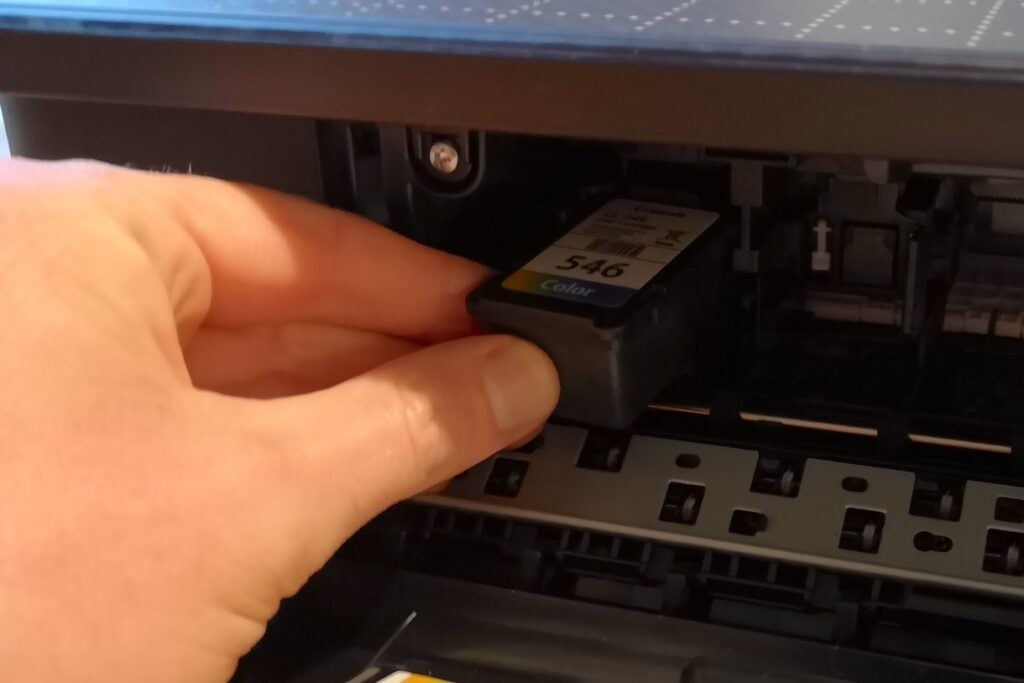 The Canon Print Inkjet/SELPHY app (iOS, Android) is quite handy. Like a lot of printer apps, it lets you print documents and images straight from your phone, or from the cloud. The usual suspects (Dropbox, Google Drive, OneDrive) are supported, along with Google Photos, Facebook, Instagram, and Canon’s own ‘image.canon’ service. A notable omission is Box – if you use this to store your files in the cloud, the Canon PIXMA TS305 is not for you.

It’s not the easiest app to use. On more than one occasion I had to restart the Android app because it would flash up a ‘This function is not available because the printer is in use’ error message, even when the printer wasn’t in use.

There’s also a document scanner (called ‘Smartphone Copy’) which lets you print photos of whatever you want on the fly, although the results are rudimentary. You’re better off taking a photo with your phone’s main camera app, and then loading that image from your phone’s local storage.

The ‘Create Photo Items’ tool, which appears to let you do fun things like add captions to your snaps, was also not available in the UK at the time of writing.

Print Speed and Quality – Competent at copy, but struggles with images

Printing a single colour 1.9MB JPEG took just under a minute. This compares well with the Epson ET-M112 monochrome printer, which is more than double the price.

Print quality is generally good. Text is generally clean and easy to read, although there was a bit of bleed with heavier fonts like Impact, and even text in bog standard Arial looked clumped and indistinct in places. But if you have the kind of lecturer who insists that everything be printed in Times New Roman, you’ll have little bother here. 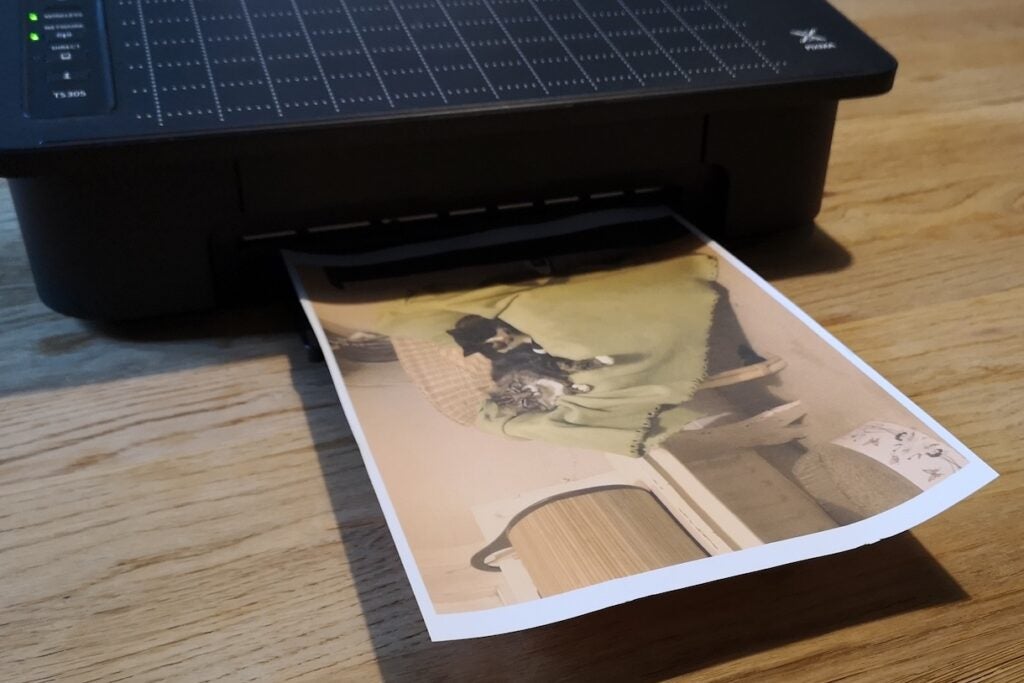 Picture quality is also quite good considering the asking price. Skin and natural tones look realistic, although blues and greens, especially synthetic colours, look oversaturated and there is quite noticeable graining on photos printed on standard A4 paper. This is entirely forgivable.

For £35, you really should not expect to be printing any Pultizer winners – if you need to print out signs for the office or posters for sticking up around town or on campus, the Canon PIXMA TS305 is fine.

In terms of how cheap the Canon PIXMA TS305 is to run, you can see from the table below that it’s far better value for money to grab a pair of XL cartridges. Typically, you can usually find both a black ink PG cartridge and a colour CL cartridge together in a bundle deal priced at £30-£35 – the same as what you’re likely to pay for the printer itself.

NB cartridge prices and yield info here is taken from Canon’s site and is correct at the time of publication.

Should you buy the Canon PIXMA TS305?

It’s a little user-unfriendly, and it feels flimsy. There’s no auto duplexing (so you’ll have to figure out double-sided prints yourself), no support for Box, and we had issues printing wirelessly from a MacBook Pro. All of this diminishes the Canon PIXMA TS305’s value.

It feels churlish to point out the fact that there’s no scanner, and the document scanner functionality of the mobile app is both variable and dependent on the quality of your phone’s camera. But criticising a £35 colour printer for not having a scanner is a bit like criticising a moped for not having a lot of seating.

All those little snags considered, Canon PIXMA TS305 is excellent value for money. Light users will love the fact that cartridge refills almost cost as much as the printer itself. If you don’t see yourself printing more than 100 sheets a year, and you only need something to run off the occasional document or boarding pass, then this is hard to beat.