The Epson ET-M1120 does one thing and one thing well, and that’s print documents. Any students or home workers needing to print off a small forest’s worth of documents every year will appreciate the low running costs, but the Epson ET-M1120 isn’t for everyone.

The Epson ET-M1120 printer is pitched squarely at students, home office workers, or anyone who needs to regularly print a lot of documents.

As well as letting you queue print jobs from a Windows or Mac desktop or laptop via USB, you can also connect to the ET-M1120 via Wi-Fi, and print documents from iOS and Android phones with the Epson iPrint app.

There’s just one USB port, which sits in a cutaway on the left-hand side of the printer, above the socket for the mains adapter. Setup is relatively easy, as it’s more or less a plug ‘n play affair.

Filling up the ET-M1120’s ink tank with the supplied bottle is foolproof, thanks to the specially-shaped nozzles of the EcoTank bottles. 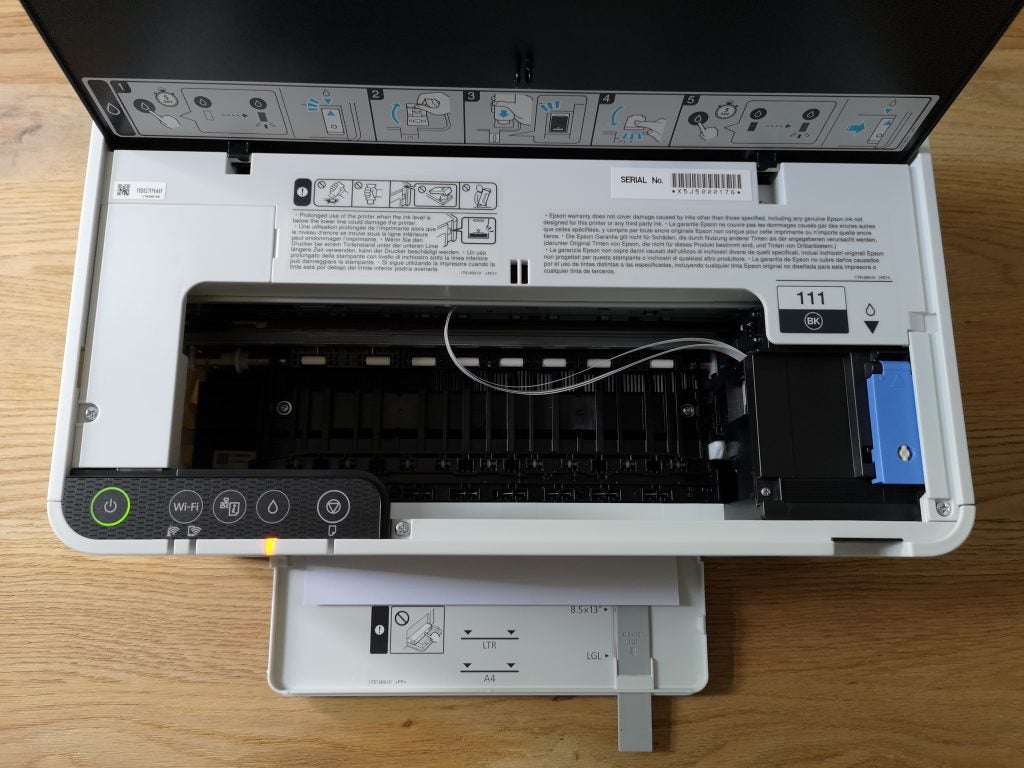 Getting the Epson ET-M1120 up and running is pretty straightforward

Paper (up to 150 sheets of A4) is loaded in the front, underneath the out-tray. A flexible plastic strip and adjustable clamps help you line everything up.

After that, all you need to do is install the relevant Windows and Mac drivers, and the Epson iPrint mobile app(s).

The latter requires connecting the Epson ET-M1120 to your home wireless network, which can be done by pairing with your router by pressing the WPS and Wi-Fi buttons on your router and the printer.

Once that’s done, the Epson iPrint app will detect the Epson ET-M112 when you’re connected to your home Wi-Fi network.

On a monochrome printer, the mobile app is kind of redundant, as any selfies or photos you send to the printer are going to come out colourless. The document scanning feature may come in handy in some cases, as is the ability to print documents from the cloud (Google Drive, Box, Evernote, OneDrive and Dropbox are supported), but most of the time, you’ll likely be issuing print commands from a desktop device. 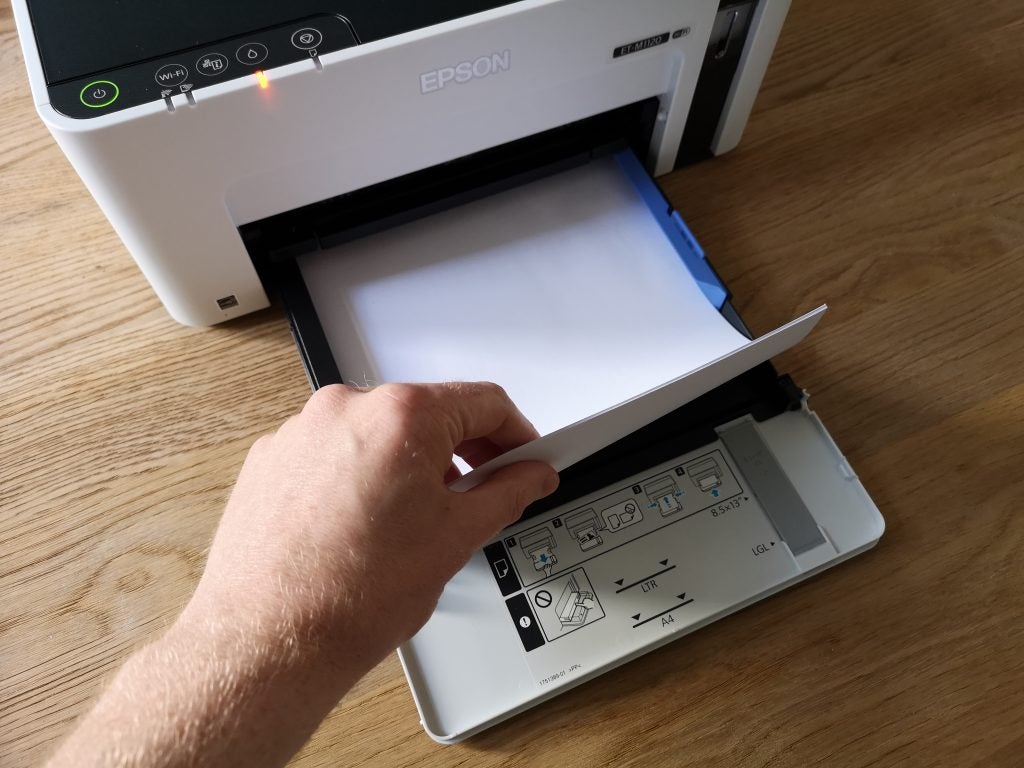 Print quality is as good as you might expect from a 1440 x 720 ppi device. Text looks crisp, smart, and sharp.

As for the cost per page, prices for a bottle of blank ink in an Epson 111-type bottle is in the £10-£15 range at the time of writing, and they can be often picked up for less in bulk-buy deals. Each refill promises you 6000 pages. However much you pay for your bottles, that’s a big yield, resulting in a very low cost-per-page of around 0.2p. Cartridges, even high-volume ones like Epson’s own 27XL series – which promises around 2200 pages’ worth of black ink at £40 a pop – can’t match this.

On the minus side, the Epson ET-M1120 would occasionally grab five or six sheets of paper at a time and print everything on the top sheet. Worse, on some occasions this would lead to errors like smudges, or misaligned text. That low refill cost is all well and good, but if you’re having to throw every odd page away because of mistakes, that could add up over time. 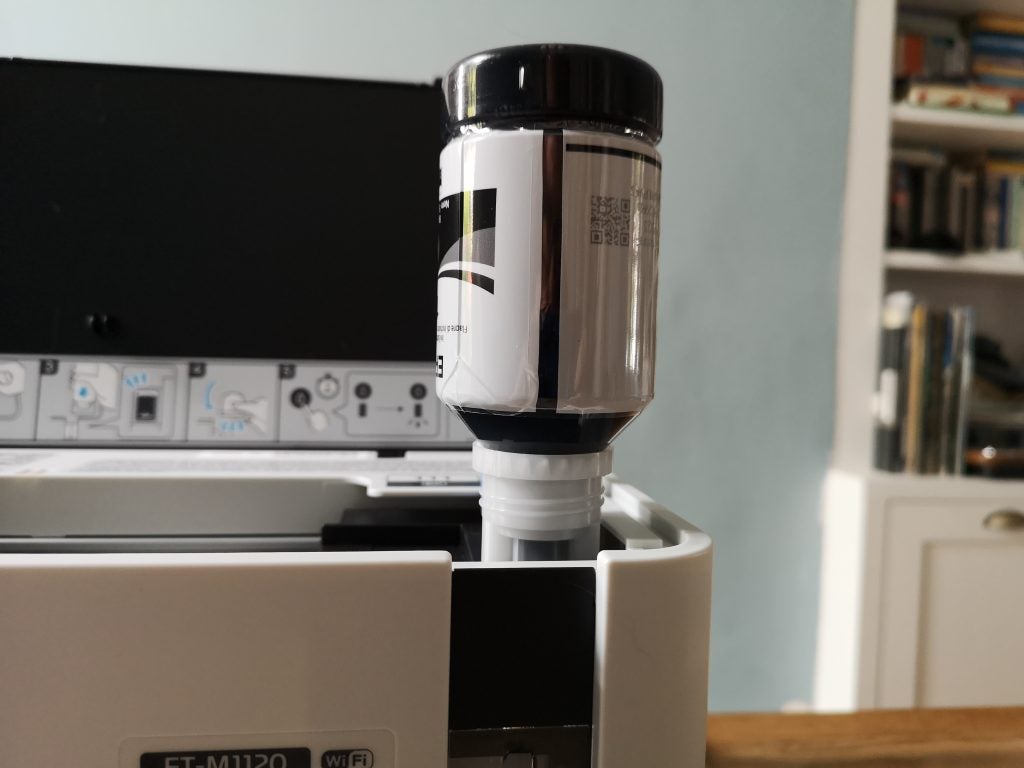 Just drop the bottle in, let gravity do its thing.

While the current price is tempting, you should really only throw in for an Epson ET-M1120 if you need to print a lot and regularly. The ink bottles the Epson ET-M1120 uses offer better mileage than cartridges.

However, even with the lower cost per page, the ET-M1120 is expensive when you consider its limitations – there’s no scanner, it can’t produce photocopies, it can’t print colour images. If your require more flexibility, take your money elsewhere. If all you need a printer for is something to run off multiple copies of essays, dissertations, community leaflets, copies of your first novel, then the Epson ET-M1120 is a good shout.