Updates to Canon’s 1D-series professional DSLRs are rare enough to count as something of an event. The new EOS-1D X Mark II replaces not only the EOS-1D X, launched back in 2011, but also the 4K video-focused EOS-1D C of 2012, improving on both. The timing, hot on the heels of the Nikon D5, is of course no coincidence. Both are designed for professional sports photography, and 2016 sees the biggest event of all – the Olympic games in Rio de Janeiro – along with the European Championships football. The two cameras are designed to give an edge to sports photographers vying for the perfect shot of the victorious athlete, or the winning goal.

With this in mind, let’s take a look at the EOS-1D X Mark II’s headline features. Anyone looking at the new model for the first time might think it’s quite a minor update, so similar are the bodies, but inside the reality is very different. Every major system of the camera has been updated and upgraded to improve the chance of catching the peak action. 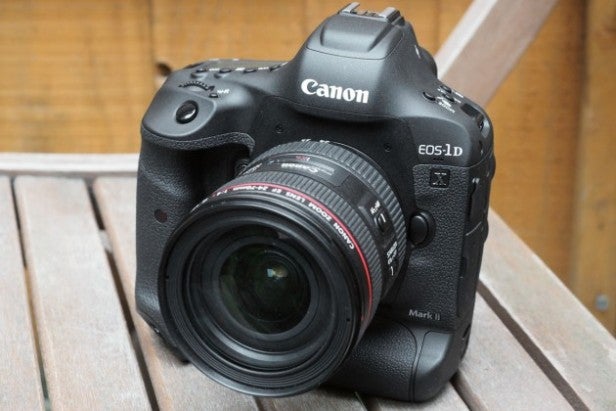 First of all, there’s the sensor, which includes a number of firsts for Canon. It’s a 20.2-million-pixel full frame CMOS sensor that’s the firm’s first to use on-chip analogue to digital conversion. Canon says that by shortening the signal pathways used when reading the signal off the sensor, this should result in lower noise, with the main benefit being increased dynamic range and cleaner shadows at low ISOs. This sounds similar to Sony’s recent sensors, and it would be great to see Canon matching them in this respect.

It’s also the first Canon full frame sensor to have Dual Pixel AF, as previously seen on the EOS 70D and 7D Mark II. This splits each pixel into two light-gathering segments, allowing on-chip phase detection autofocus across 80% of the image area with all Canon lenses released after 2009. It operates in live view and during video recording, aiming to give smooth focus pulls from one subject to another. For this the transition speed can be adjusted, and subjects can be selected by tapping on the camera’s touchscreen. 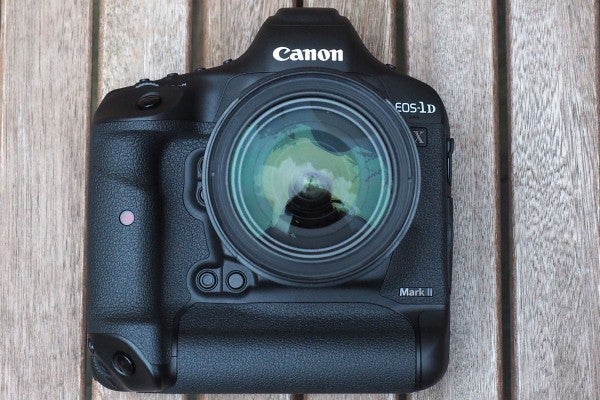 For normal viewfinder shooting, the autofocus system has also been completely overhauled. The number of focus points is unchanged at 61, of which 41 are cross-type sensitive to both horizontal and vertical detail. But now, all of these focus points will work with lenses that have an effective aperture of f/8, which is great news for photographers who use long telephoto lenses with teleconverters. What’s more, 21 of them continue to work as cross-type points at f/8, and the system also works in light levels as low as -3EV. Focus points can be displayed in the viewfinder either black, or red with user-controllable brightness.

To keep track of moving subjects, Canon has introduced a new AI Servo AF III+ mode. An adaptive motion tracking system uses the gyro sensors in image-stabilised lenses to measure the camera’s movements while following the subject, determining whether the subject is moving smoothly or erratically. This information is then fed into the focus tracking algorithm. There’s a new 360,000 pixel RGB+IR metering sensor too, which can detect subject’s faces and feed this to the AF system, determine the type of lighting, and perform flicker detection when shooting under fluorescent light. 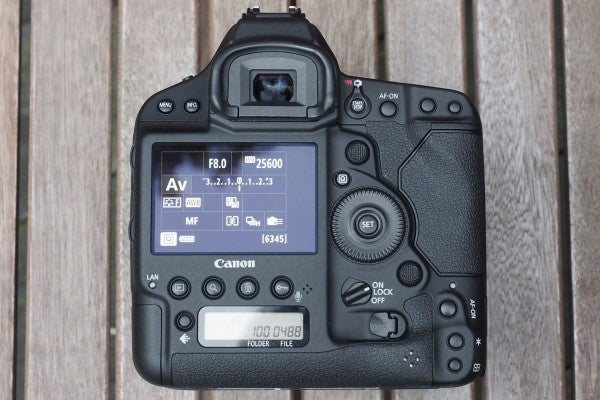 The camera offers a standard sensitivity range of ISO 100 – 51,200, which can be extended to ISO 50-409,600. With dual Digic 6+ processors onboard, it can shoot at fully 14 frames per second using the optical viewfinder, complete with autofocus tracking. Switch to live view and the speed increases even further to 16 fps, although with focus and exposure locked after the first shot. A massive 170 shot raw buffer allows it to keep this rate up for more than 10 seconds before slowing down. A quiet continuous shooting mode is capable of 5fps, for use in more sensitive environments; however the latest EOS 5D series models are still noticeably quieter. The shutter is rated to 400,000 cycles (or a shade less than 8 hours full-speed shooting!).

Working at such high speeds requires huge amounts of data to be stored quickly. To this end the 1D X Mark II adds a CFast card slot alongside conventional CompactFlash, rather than having two CF card slots like its predecessor. A CFast card is also required for 4K video recording at high bit-rates. 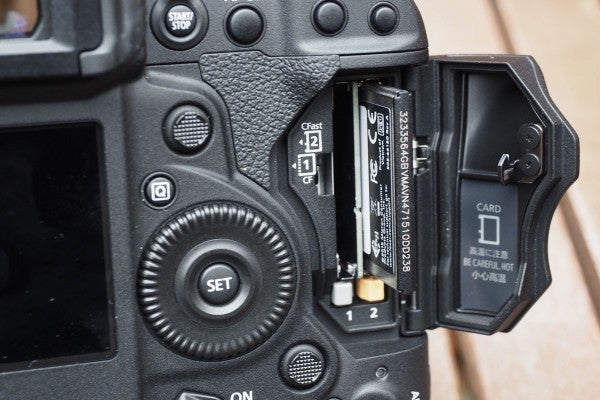 Plenty of invisible changes have been made under the hood to refine the camera’s capabilities. A completely redesigned mirror assembly does away with springs, replacing them with cam drives to minimise mirror bounce and any resultant image blur. There’s a new ‘carrier wave’ dust reduction system to keep the sensor clean, which Canon says is very important given the ultra-high shooting speed, along with in-camera hot pixel mapping. An internal heat dissipation pathway helps keep the sensor cool during continuous shooting or video recording

Sports photographers need to be able to dispatch images quickly, and the EOS-1D X Mark II includes the facility to crop cameras in-camera and dispatch them to a picture editor. Unexpectedly though, there’s no built-in Wi-Fi; owners will have to make do with the add-on WFT-E8 unit, or the built-in USB 3.0 or CAT-5 Ethernet ports. The camera’s JPEG output should be more detailed thanks to Canon’s latest ‘Fine Detail’ Picture Style, along with diffraction compensation processing when shooting at small apertures. 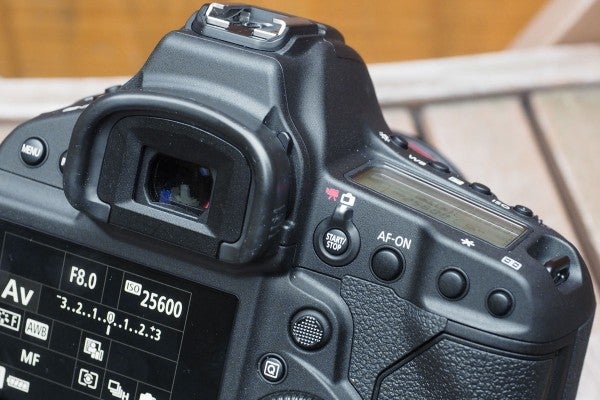 As a professional workhorse the EOS-1D X Mark II needs to be able to accept serious abuse, and it has the same rugged, weather-proofed build as its predecessor. The external design and control layout is almost identical, too, which means existing EOS-1D X owners will be able to pick it up and start using it right away. Indeed it’s testament to how well worked-out the 1D-series’ control interface has become that the most noticeable change is the addition of Canon’s standard live-view/video controller beside the viewfinder.

There are a few other detail changes; the AF point selector joysticks are a little larger, the raised ridge between the front-plate custom buttons has been removed, and the vertical grip is deeper. Both grips also gain noticeably thicker, more tactile rubber coatings that make the camera feel even better in your hand. 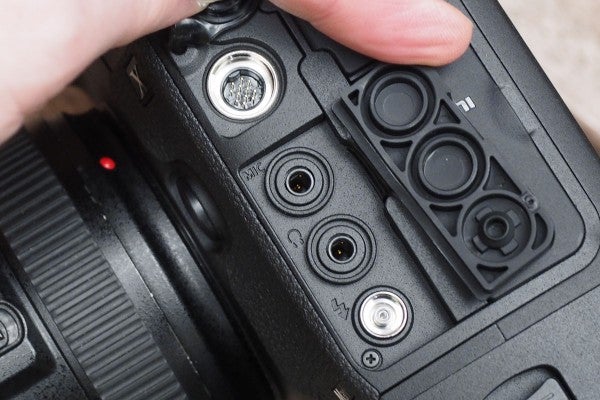 In 2012, Canon made a professional DSLR with internal 4K video recording, in the shape of the EOS-1D C, which cost a considerable premium over the base EOS-1D X. Now the EOS-1D X Mark II includes 4K recording as standard, effectively making the 1D C redundant. It’s capable of recording in 4096 x 2160 pixel Cinema 4K at up to 60 fps from a central section of the sensor, giving an approximately 1.3x crop. A huge 800MBps bit-rate with 4:2:2 chroma subsampling and BT.601 broadcast standard colour output promises high quality footage. Recording time is up to 29min 59sec. Stills can be extracted from 4K footage at 8.8MP resolution.

Full HD video recording is also available of course, this time using the entire sensor area and including a 120fps high-speed mode. Oddly Full HD footage can be output to an external recorder, but 4K cannot. 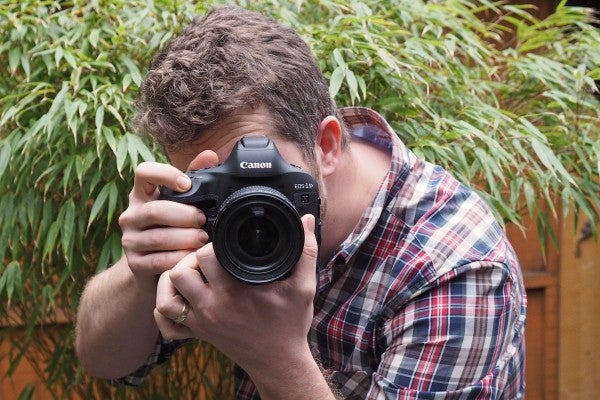 From our time hands-on with the camera prior to its official launch, the EOS-1D X Mark II is every bit as impressive as its £5,199 price tag might suggest. It may not have the 153-point AF or ISO 3,280,000 of the Nikon D5, but on the other hand it can shoot 2fps faster and record 4K video internally a for much longer time. In truth both are astonishingly capable cameras, with differences that will only really show up in incredibly demanding shooting situations.

This kind of camera also gives enthusiast photographers a hint of the technology that might make its way down the line to more affordable models on the not-too-distant future, and in this regard Canon’s adoption of on-sensor ADC is a promising development. We’re looking forward to seeing what benefits it brings, along with much more besides, in our upcoming full review.