The Canon EOS 100D marks something of a sea change for Canon as a response to the growing popularity of Compact System Cameras (CSCs). The model slots in to the company’s EOS range of DSLRs – between the EOS 1100D and the Canon EOS 600D / EOS 700D – and bears the distinction of being both the smallest and the lightest DSLR in the world.

But is this accolade enough to tempt would-be Compact System Camera (CSC) purchasers back towards the EOS DSLR range? 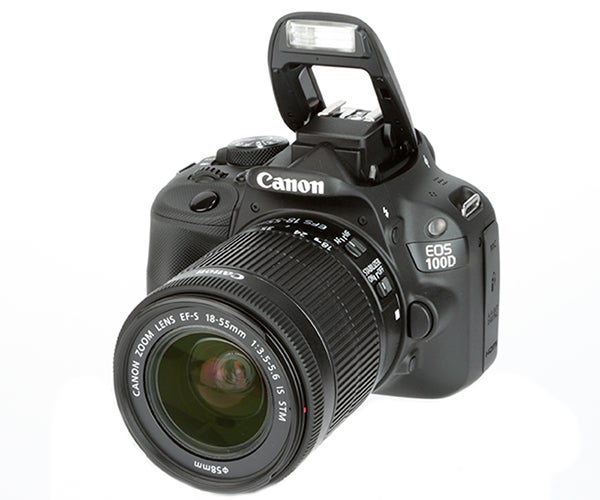 Despite being the smallest and lightest DSLR in the world, the Canon EOS 100D is by no means stripped back in order to make that grade. In fact, it has much the same specification as Canon’s larger triple-digit models.

For instance, the Canon EOS 100D sensor is the same resolution as the EOS 700D, although the 18MP APS-C Hybrid AF II CMOS sensor is smaller and thinner sensor to help make the 100D smaller than typical DSLRs.

The sensor itself has an ISO range of 100-12,800, extendable to 25,600 in the ‘H’ setting. The sensor, as the name suggests, features built-in phase-detect autofocus (AF) technology and as a result supports continuous AF when recording HD video.

The 100D supports HD video capture at a range of frame rates – including 30, 25 and 24fps – as well as offering the option to shoot at 50fps, albeit at the lower 1280 x 720 resolution. Those serious about video recording will love the inclusion of a 3.5mm mic port on the camera’s body, too 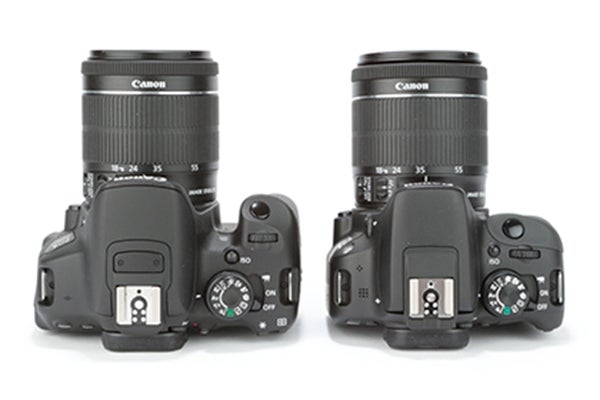 One of the ways the Canon has miniaturised the 100D is shrinking the camera’s component board. Despite this, the Canon EOS 100D still has the top-end Canon DIGIC 5 image processor that offers a burst speed of up to 4fps, with a claimed burst depth of 28 JPEG files or 7 Raw images.

The AF system not only benefits from the phase-detect AF presence on the sensor, but also features Canon’s tried and tested 9-point AF array with one cross-type AF point housed in the centre.

As for metering, the 100D features Canon’s 63-zone SPC system – the very same that has produced such excellent results on other Canon DSLRs, including the Canon EOS 7D. Any issues with exposure can be addressed through the exposure compensation system, which has 1/3 stop increment adjustment over /-5EV. 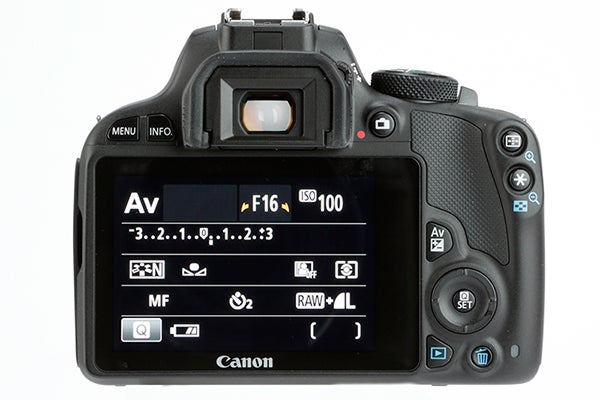 At the rear of the Cannon EOS 100D sits the impressive 3-inch, 1,040k dot LCD screen, which is a huge improvement on the Canon EOS 1100D. Above it, meanwhile, sits one of the major selling points of a DSLR ahead of a CSC, namely an optical viewfinder. Although coverage isn’t a full 100%, at 95% it’s entirely respectable, and it also benefits from dioptre correction and depth of field preview.

Another selling point of the Canon EOS 100D over CSCs is that it adopts Canon’s EF-S lens mount, meaning it can be used with both EF and EF-S lenses that you might already own if you’re a seasoned Canon owner.

There’s a built-in flash on the Canon EOS 100D with a guide number of 13, although once again Canon owners will no doubt be pleased with the presence of a hot shoe that supports Canon’s EX series of speedlights.

Unfortunately, one feature that is lacking is any kind of Wi-Fi functionality; something which is becoming ever more prevalent in DSLRs as photographers look to combine their camera with their smartphone or tablet. It’s not deal breaker, but a point worth noting when considering what to buy.