As mentioned earlier, some clever trickery with the inner workings of the Canon EOS 100D has resulted in the camera being quite startlingly small. But just how small is it?

In comparison to the Canon EOS 650D, the 100D is nearly 10mm smaller in height and over 15mm shorter in length. In fact the Canon EOS 100D is even smaller than some competing CSCs, as it’s around 30% lighter and 20% thinner than the Panasonic Lumix GH3. 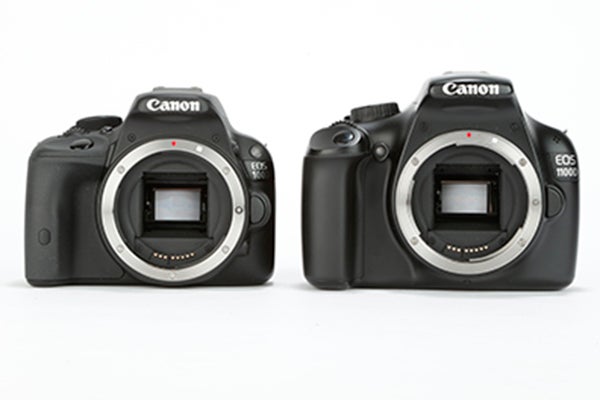 It’s impressive feat for a DSLR, even more so considering build quality isn’t sacrificed to achieve it. Canon has replaced stainless steel with an equally sturdy but much lighter aluminium alloy, while the polycarbonate resin, and carbon and glass fibre, provide a hardy yet lightweight feel. Add to that the overall quality finish – including various rubberised elements around the body – and the Canon EOS 100D feels much nicer in the hand than the EOS 1100D.

Button design and arrangement around the body is pleasing, too. The model’s d-pad is smaller than some that we’ve seen in similar Canon DSLRs before, but this does allow for the ample touchscreen.

Also of note is the neatly arranged top plate, which features an On/Off switch located around the mode dial that also offers quick access to the 100D’s movie capture mode. Indeed, there aren’t that many physical controls, with only one scroll dial as opposed to two on larger cameras. To compensate, several buttons have a dual purpose – in manual mode photographers must depress the AV /- button in combination with the top plate dial to change settings, for example. 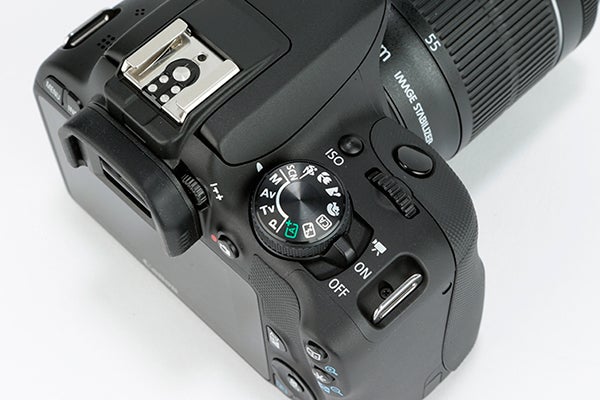 Those with larger hands might find the Canon EOS 100D a little on the small side, but on the whole there’s very little to fault about its handling and its compact size adds a welcome and impressive dimension.

Just as the Canon EOS 100D’s compact size doesn’t impede too much on its build quality or handling, its performance doesn’t suffer much.

AF performance is respectable. Although the Canon EOS 100D only has one cross-type AF point in the centre of the frame, as opposed to the full nine in the Canon EOS 700D, it didn’t pose too many problems in testing.

The 100D’s Live View function is something of a saving grace here, too. If you find the 100D struggling to acquire the correct focus point, simply switch to Live View and select the desired focus point on the model’s touch screen LCD. 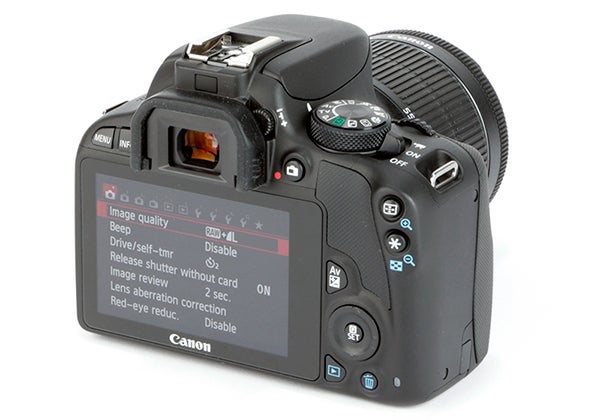 The touch screen itself is truly first-class – it’s as good as smartphone or tablet. Not only is it responsive, but the calibration of the various settings means that you have direct access to a range of the camera’s functionality straight from the screen. The icons on the screen, while small, are perfectly responsive. The fact that the monitor also supports swipe and pinch to zoom gesture control makes it a pleasure to use.

The Canon EOS 100D met its claimed 4fps burst speed most of the time during controlled testing conditions, although the camera’s buffer offered varying levels of results. With a SanDisk Extreme Pro SDHC card the Canon EOS 100D captured four JPEG and Raw files before slowing. Setting the camera to capture just Raw files also allowed for four files before the buffer was full. However, if you set the camera to shoot solely JPEG files you can shoot to the card’s capacity with no worries about the 100D slowing.

The 18-55mm IS STM kit lens helps video capture immensely. When shooting, the stepper motor (STM) in the lens allows for perfectly smooth transitions of focus when shooting. Not only that but the motor is completely silent, removing any threat of a noisy focus motor affecting the video’s audio.

One pain with previous EOS DSLRs was that there was no way of previewing any of the model’s creative filters before applying them. The good news is that Canon has listened to these criticisms, and the EOS 100D offers Live Preview of any filters through the model’s Live View system.