The Candy Grand'O Vita GVS169DC3 is a 9kg machine costing less than £250. Even better, it has an A+++ energy rating, for some impressively low running costs. Given its budget nature, you have to put up with more basic build quality and a very simple but easy-to-use set of controls, but wash performance is generally very good.

Low-cost and high capacity aren’t two terms that are usually compatible when picking a budget washing machine. Yet, the Candy Grand’O Vita GVS169DC3 manages both, plus this 9kg washing machine also has an impressive A+++ energy rating.

The features don’t stop there. The GVS169DC3 can also be controlled via an NFC smartphone, which is a feature that I wasn’t expecting at this price. Control is quite limited, though, particularly if you have an iPhone.

Decent stain removal in our tests, particularly on the cotton cycle, and impressive running costs help the side, making this a decent choice if you’re after a budget washing machine.

Given the low price, the Candy Grand’O Vita GVS169DC3 is a rather standard affair. Decked out in glossy white plastic, with a silver-effect plastic trim, you’re getting a bog-standard washing machine here. That’s not to say it looks particularly bad; just that there isn’t anything exciting going on.

The door opens smoothly, hinged on the left, providing access to the drum. This 9kg machine has a decent-sized portal, although the drum is a little shallower than on some other models I’ve reviewed. 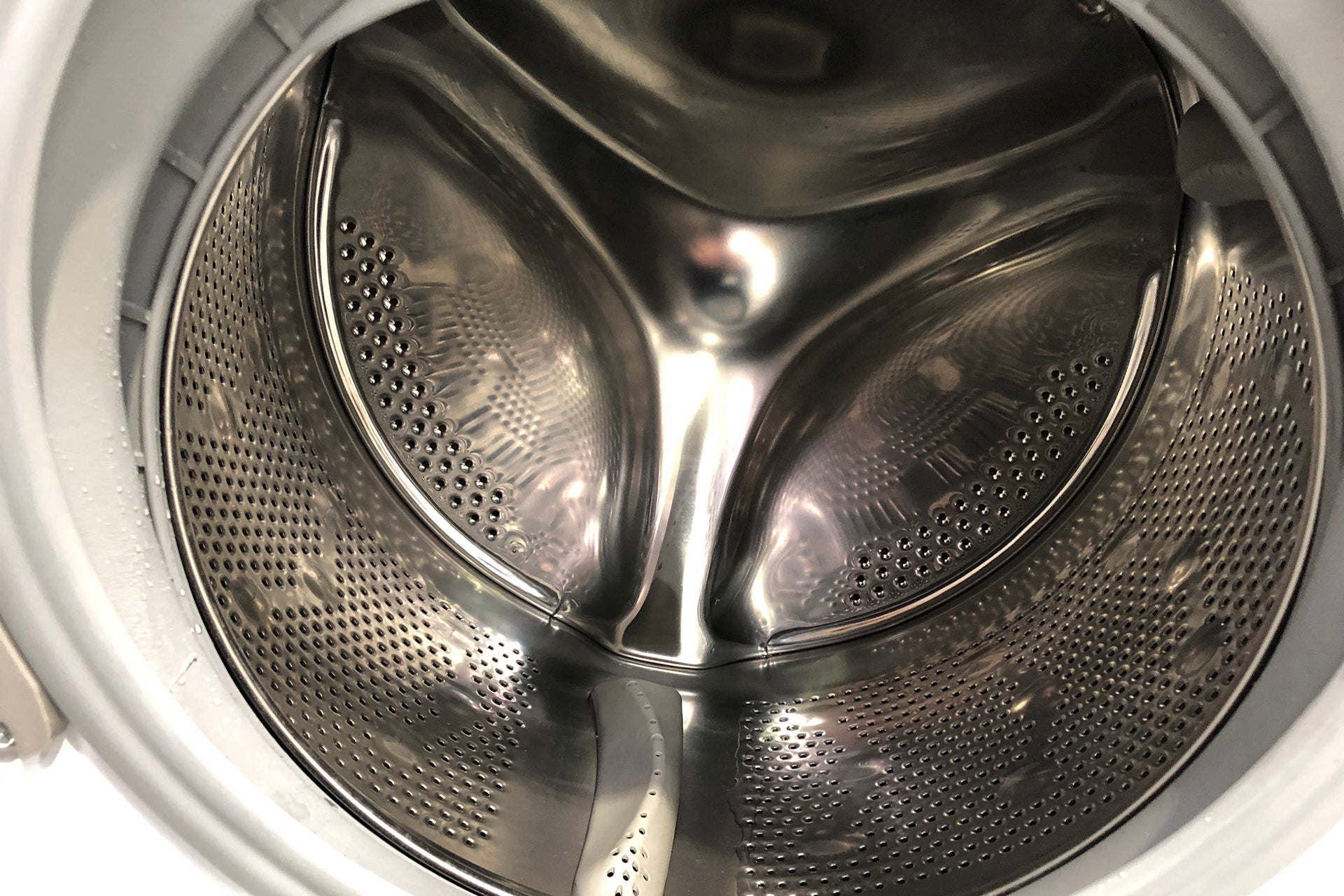 There’s a decent-sized opening to get your washing in

Once loaded with our near-3kg load of washing – including a sheet, towel, pair of jeans, shirts and underwear –there was still a good amount of room. Depending on what you’re washing, getting up to the full 9kg capacity could be tricky with some loads. However, there’s definitely enough room to squeeze in a full double duvet, if you need to wash one. 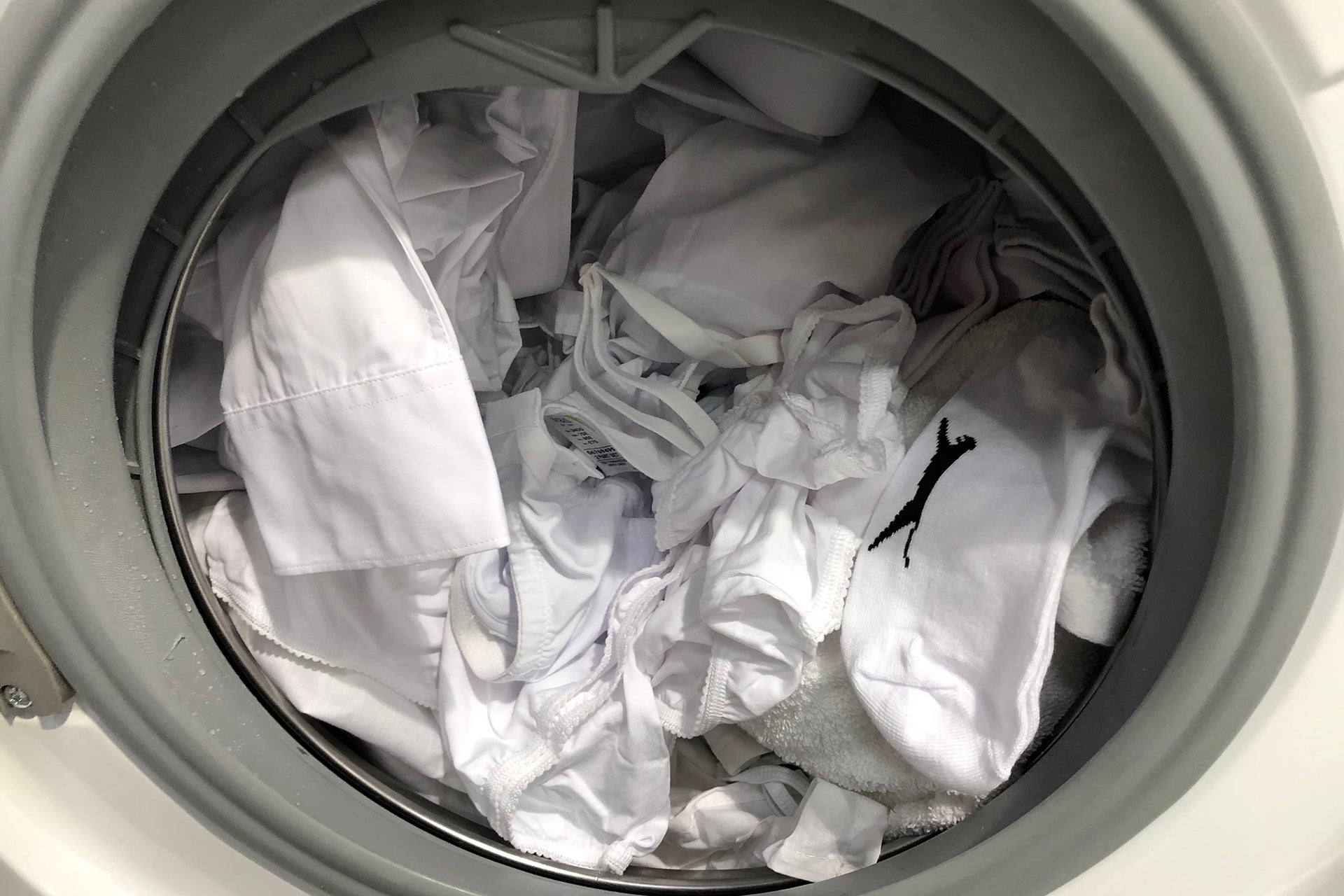 Our test load went in well, although you may struggle to hit 9kg with all types of washing

Candy Grand’O Vita GVS169DC3 features – Basic controls are easy to use, although the app may be pointless for you

The Candy Grand’O Vita GVS169DC3 doesn’t stray too far from the norm. There’s a nicely labelled selector dial that lets you pick from the main programmes, which includes the usuals (cottons, synthetics, and so on) but also has some special washes to cover wool, hand wash, jeans and delicates. 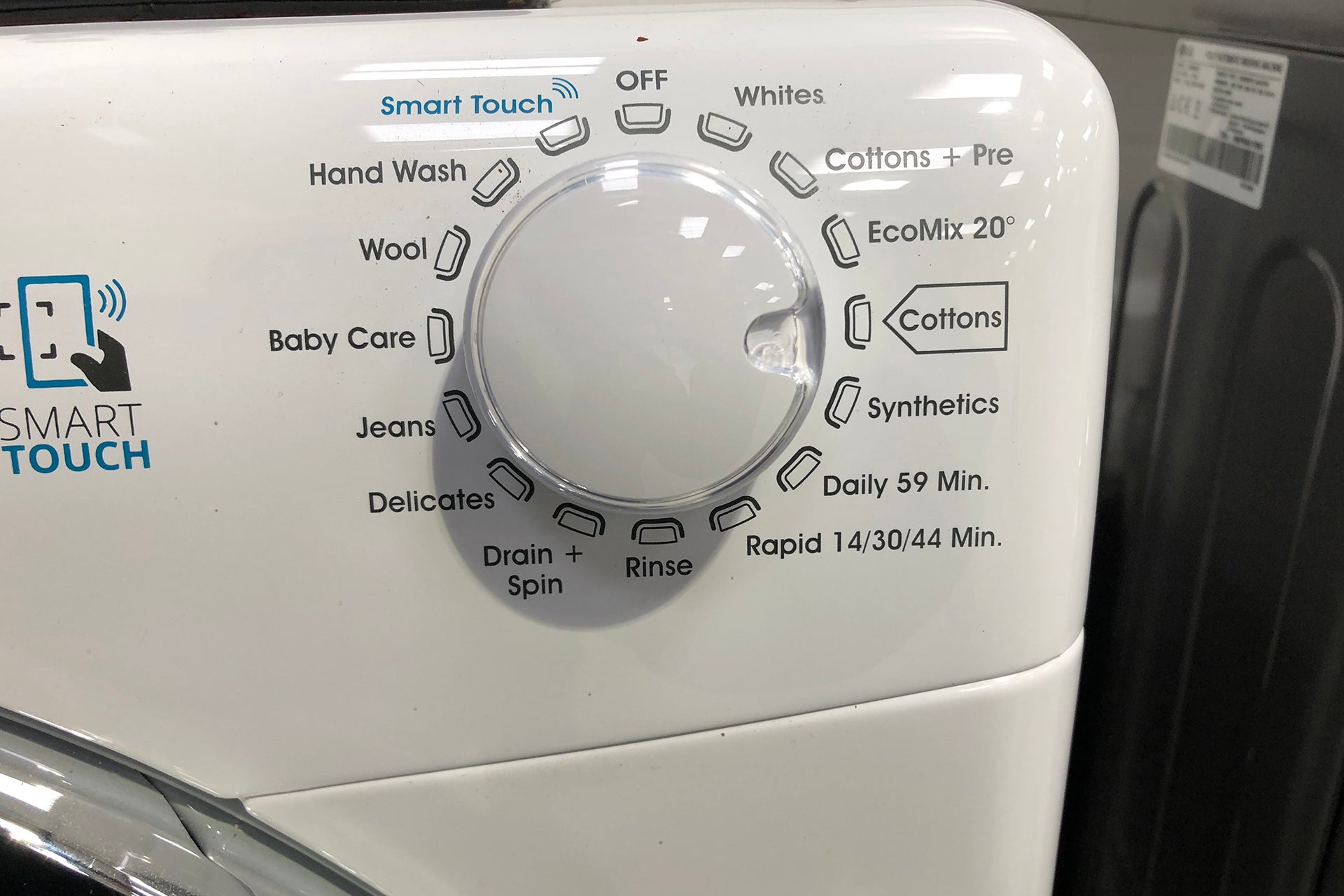 The programme dial is basic but easy to read

Once a programme has been selected, the screen and main set of controls show you how long the wash will last and the default settings for it. You can override the defaults, choosing a different temperature and spin speed. However, you can’t increase the temperature past the maximum setting for the wash. 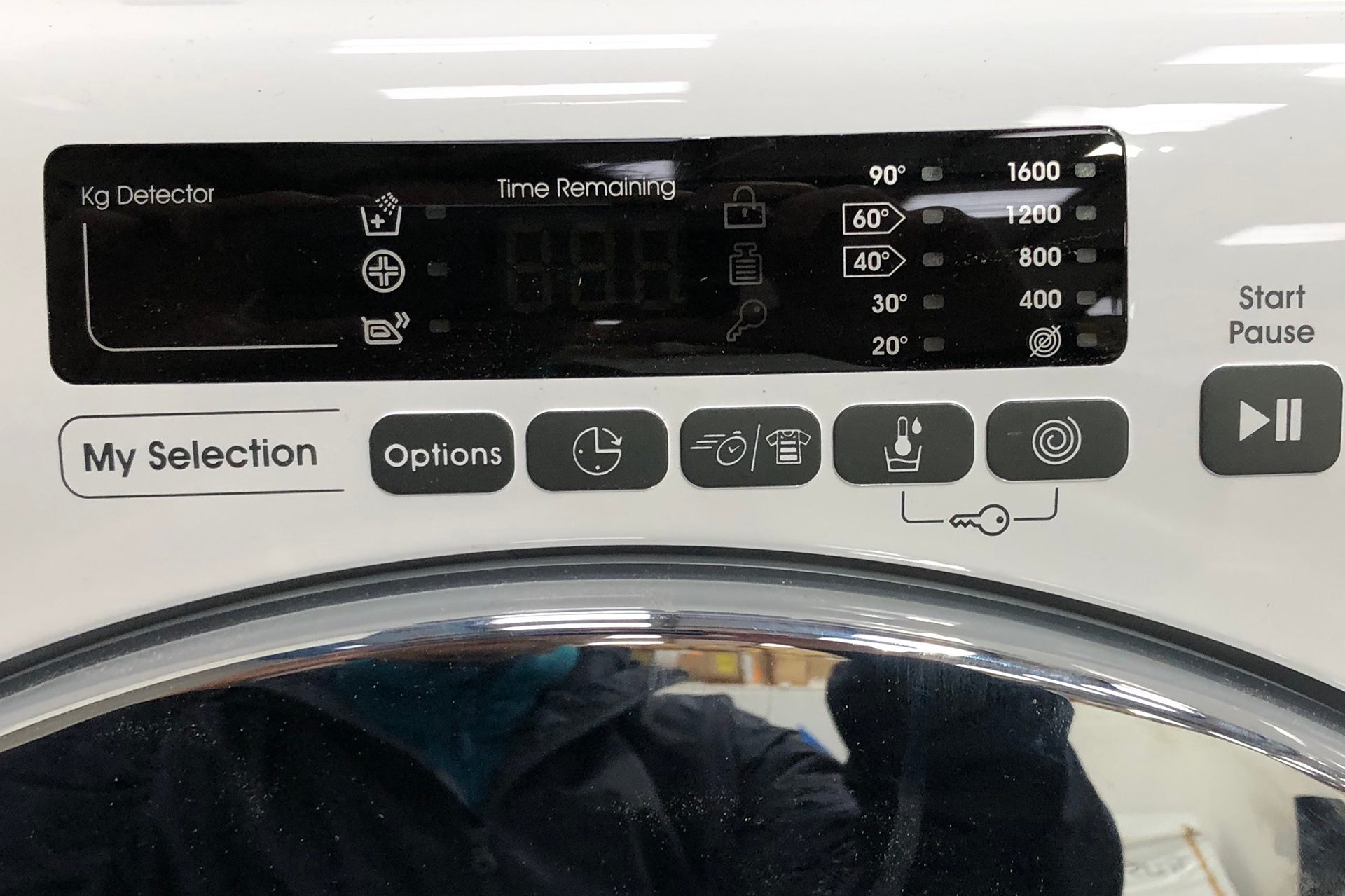 There’s also a delay timer (in hours, from one to 24) and an options button that lets you select an extra rinse, the hygiene mode (for washes at 60ºC and above, this option maintains the same temperature throughout the entire wash), and an anti-crease easy-ironing mode. Basic as these controls are, they’re extremely simple to use and you shouldn’t need to turn to the manual too often.

Next to the programme dial, you’ll see the Smart Touch area with a picture of a smartphone. This is to enable NFC-enabled smartphones to transmit a programme from the Candy Simpli Fi app to washing machine. Only, it isn’t all NFC smartphones, since iPhones currently aren’t supported and you can only use an Android handset.

Simpli Fi is an app that needs some attention: when you first fire it up, you have the option of Log In or Sign In; your guess is as good as mine as to what the difference is. Once you’ve created a user account and have logged in (or signed in), you can register your washing machine, using the code and serial number printed on the plate just inside the door. 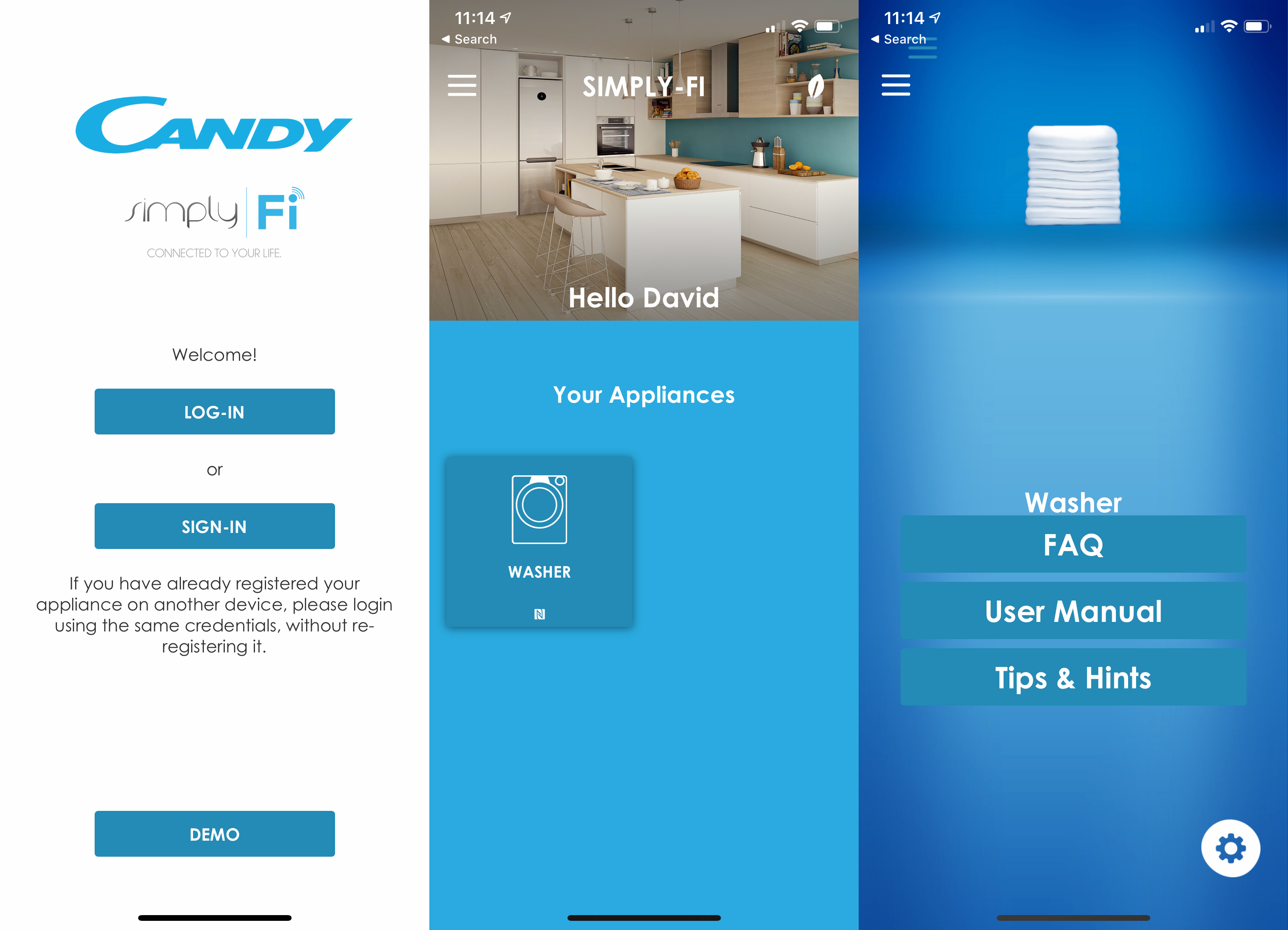 The Simpli Fi app could do with a few interface tweaks

If you have an iPhone, the only options are to read the FAQ or manual online, and there’s no integration with the GVS 169DC3 at all. If you have an Android phone, you can select a programme, customise it and then beam it to the washing machine to run. It’s a neat idea, but in practice a little cumbersome. Simpli Fi is more useful on Android, but I wouldn’t use it often

The main frustrating thing is that the Simpli Fi app provides a maintenance wash option, which isn’t available from the main programme dial where it would arguably be more useful.

There’s a standard pull-out detergent drawer for pre-wash and wash fluid, and fabric softener. The drawer moves easily and can be removed for cleaning. 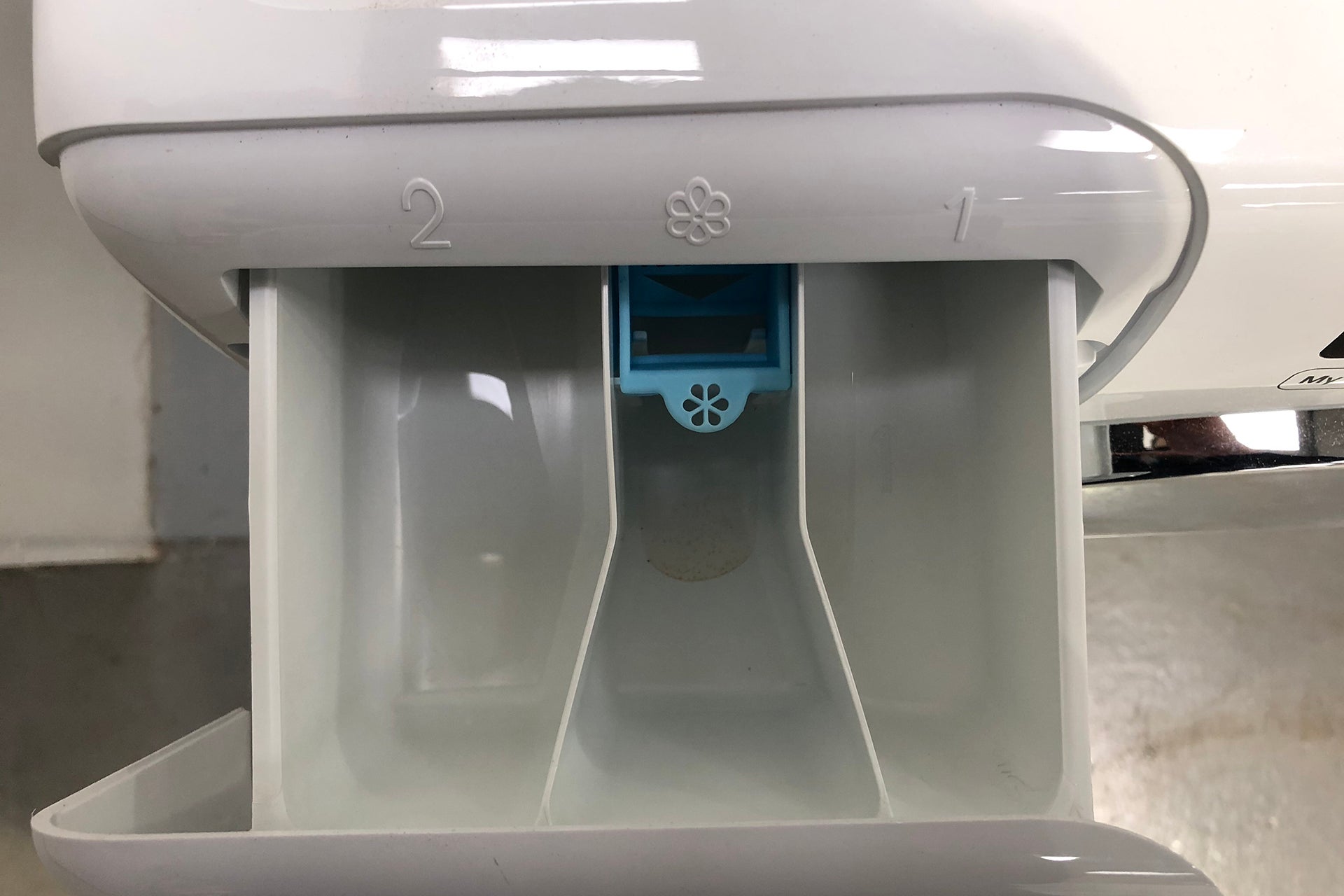 The detergent drawer is as you’d expect

Rated A+++, the Candy Grand’O Vita GVS169DC3 should be efficient to use and run. To test, I started out with our standard wash at 30ºC. This cycle used 0.53kWh of power and a fairly frugal 29.4l of water.

Thanks to the 1600rpm spin speed, our clothes retained 0.9kg of water, which works out at a decent 34.62% of their original weight. The washing machine’s energy label says that this machine has an A-rated spin cycle, and the tests confirm it. It’s useful to have such an efficient spin, since it means that your clothes spend less time drying or in a tumble dryer.

Examining our stain strip, we have – left to right in the image below – red wine, vegetable oil, tomato sauce, orange juice and gravy, all left to dry into the fabric. At the end of the wash cycle, all the stains had effectively been removed, bar a circle of the tough red wine test and a faint mark left of the ketchup. 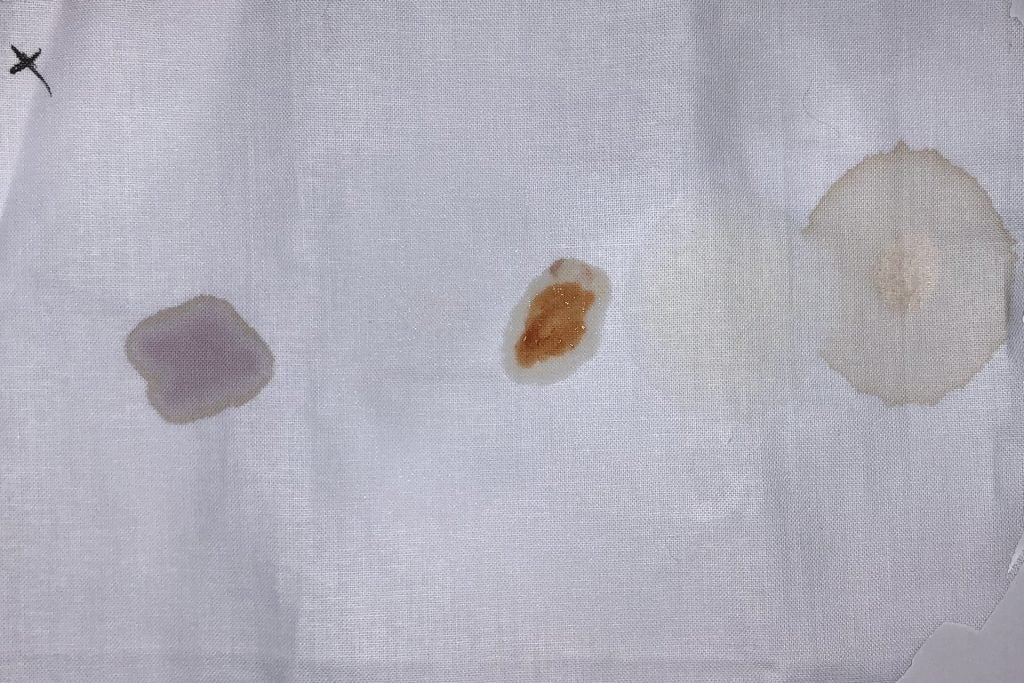 Switching to the 40ºC synthetics cycle, the power usage went up to 0.73kWh, largely due to the increased temperature and the different use of the drum. Water consumption went to 74.2l, too. With a lower spin speed of 1200rpm, water retention was 1.34kg or 51.54% of the dry weight of the clothes. Even so, these are good figures for a synthetic cycle. 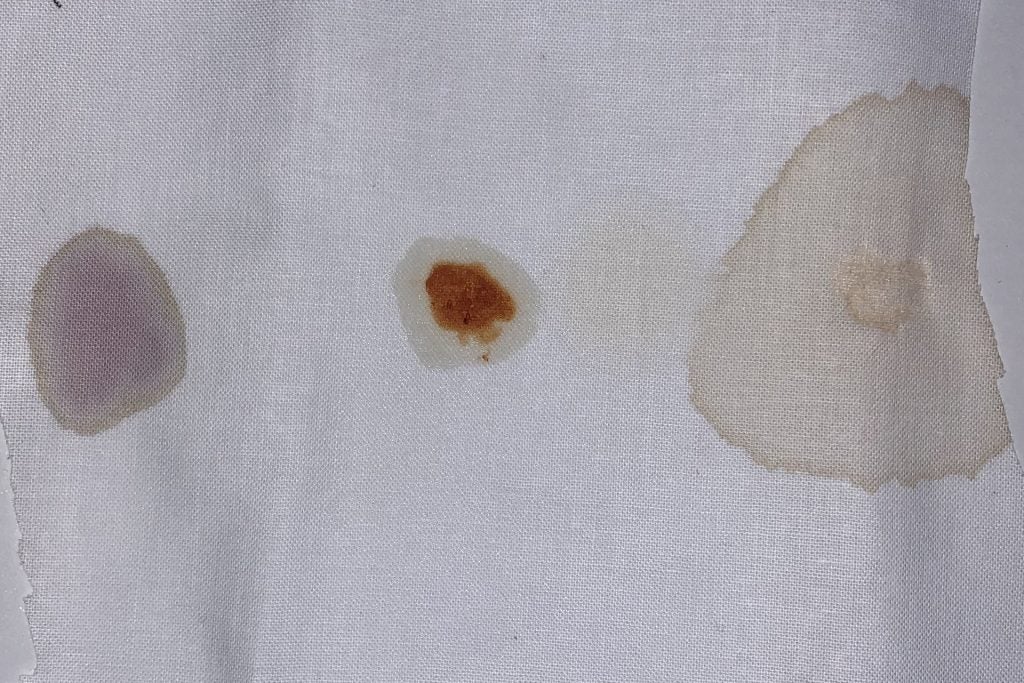 Stain removal wasn’t quite as effective, since the stain strip folded and twisted inside the sheet during washing. As such, results may vary from wash to wash. I found that most of the stains were removed, but there was some red remaining, while the tomato sauce stain had partially transferred to another part of the stain strip. However, where the strip hadn’t become folded, the ketchup stain was less visible than on the 30ºC cotton wash.

It’s worth pointing out that in both tests, the countdown timer wasn’t particularly accurate. For the synthetic wash, I found that the last 2 minutes of the spin cycle took closer to 10 minutes to complete. Think of it as an indicator of time, rather than a hard-fast timer.

Noise performance is decent, and I measured the Candy Grand’O Vita GVS169DC3 at 57.7dB during the standard part of the wash, taken from 30cm from the middle of the door. Spin speed was 79.6dB. Both figures are below the figure stated on the EU energy label, and about average for a cheaper washing machine.

To get some more in-depth running costs, I used the figures stated on the EU energy label, which assume 220 washes per year. This let me break-down the stated energy and water consumption figures to give us an average cost per wash, using average electricity and water costs.

Since washing machines are most efficient when running at full capacity (for instance, you wait until you have 9kg of washing before putting on a load), I then worked out how many full loads it would take the Candy Grand’O Vita GVS169DC3 to complete all of the washing. This gives a level playing field and shows that the GVS169DC3 would cost £48.46 per year for high users, £36.35 per year for medium users and just £24.23 for low users. That’s very low.

The Candy Grand’O Vita GVS169DC3 is rather basic in its looks and has a very simple control system. Yet, for all of that, it’s easy to use, and the machine has solid if not basic build quality. While it’s nice that there’s an app, you’ll probably use it once and then switch back to using the on-device controls instead.

Running costs are impressively low, even more remarkable by virtue of how little this washing machine costs. Stain removal is about as good as I can expect from a machine at this price.

Spend a bit more and you can get lower running costs still, better stain removal and lower levels of noise. However, if you’re on a tight budget and you need a large-capacity washing machine, the Candy Grand’O Vita GVS169DC3 delivers.