That’s fun enough, but Gunslinger isn’t finished yet. When you’re at death’s door the ‘sense of death’ ability kicks in, giving you a 50/50 chance of dodging the final bullet and earning a reprieve. It’s a brilliant idea, allowing you to avoid yellow-belly tactics and still have a shot of coming through unscathed. We’re not quite so sure about the occasional quick-time event shoot-out sequence, but at least these are fairly few and far between.

Finally, Gunslinger has some fine boss battles. Some are played out as straight duels, your right stick focusing on your enemy, the left stick keeping your hand at the ready, and you waiting nervously for the heartbeat to come in and your foe to draw before you squeeze the trigger and fill ‘em full of holes. Others work out as more traditional boss battles, as you face down tougher enemies armed with dynamite or Gatling guns. These aren’t imaginative, but they are fun and challenging. You’re worked hard, but never left frustrated. 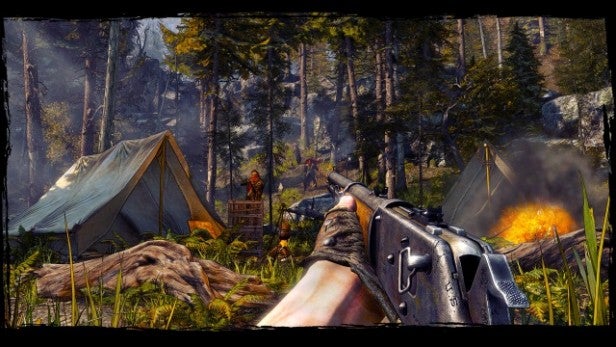 Your bounty hunter’s tale takes you through all the classic Western settings, from frontier towns, saloons and banks to mines, fog-bound swamps, dusty canyons and rain-drenched lumber mills. Along the way you’ll meet a clutch of famous names, including Billy the Kid, the Danton brothers, Curly Bill Brocius and Jonny Ringo, and blast your way through horses of nefarious varmints. The environments are nicely rendered and occasionally stunning, and while there are signs of the budget in the repetition of enemies, the way they go down sprawling, blood splattering over the frame makes up for that. This doesn’t look or feel like a cut-price, download-only game. 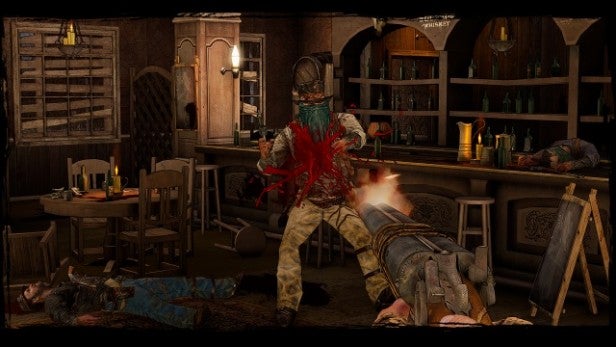 Well, OK, it does in one respect. At around six hours, Call of Juarez: Gunslinger is fairly brief. Still, once you’ve tackled the campaign once – or maybe even twice – there’s an equally enjoyable Arcade mode to play. This turns sections of the campaign into fast-paced shooting galleries, with the emphasis on racking up the bonus score and finishing the level in record time. This is brilliant fun and – with leaderboards at stake – a real time sink. Played this way, Gunslinger hits the same kind of targets as score-attack FPS games like Bulletstorm or The Club, and if you liked those, you’ll definitely like this. We’re not so keen on the other mode, which effectively isolates the duels from the campaign, but it’s still worth a spin. 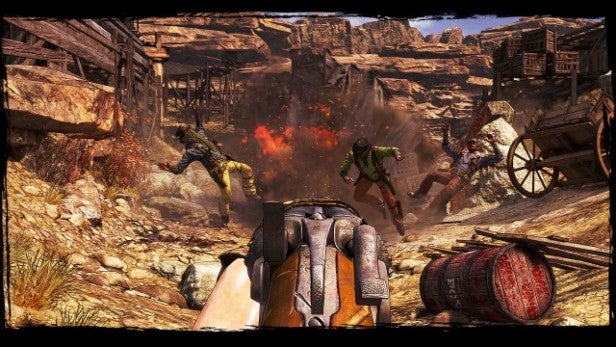 Sometimes a game succeeds because it summons up some of the feelings you used to get watching movies, and particularly the feelings you used to get while watching movies as a kid. For a few hours you can forget that you’re some ordinary guy or gal, and make-believe you’re a James Bond, a Batman, the world’s fastest getaway driver or some sci-fi super soldier from the future.

In its best moments, Call of Juarez: Gunslinger does exactly that. It brings back the spirit of Eastwood in his prime, and makes you feel like the fastest gun in the west, taking out outlaws in a hail of bullets and leaving you the last man standing in the saloon. If that’s not worth ten to twelve quid, we don’t know what is.

Some will moan about its lack of original ideas, its linear nature and its focus on Western clichés, but at the end of the day Call of Juarez: Gunslinger delivers much, much more than your money’s worth of furious, pistol-packing fun. It’s brief but very fast paced, with some rewarding game mechanics, some smart narrative ideas and a brilliant score-attack mode. We’d pay out our fistful of dollars any day.

Next, read our Xbox One vs. PS4 comparison.