At this point, almost nothing Ubisoft can do would surprise us. After giving the Far Cry team license to build the weird and mostly wonderful Far Cry: Blood Dragon, it’s given Techland scope to produce a game that’s almost as odd and exciting. Maybe it’s the freedom of going download only. Maybe it’s the feeling of wild abandon that comes when your b-list FPS franchise has hit rock bottom, but Call of Juarez is a dumb, balls to the wall shooter that isn’t afraid to take risks. It eclipses Call of Juarez: Bound in Blood as the best game in the series, and it’s a fistful of dynamite more fun than it has any right to be.

Low budgets have encouraged a kind of loose creativity here. The cut-scenes are motion comic-book interludes, cel-shading effects obscure some less than triple A graphics, and the fairly short six-hour running time is mitigated by the budget price, and by the fact that Gunslinger is 99% killer, 1% filler. 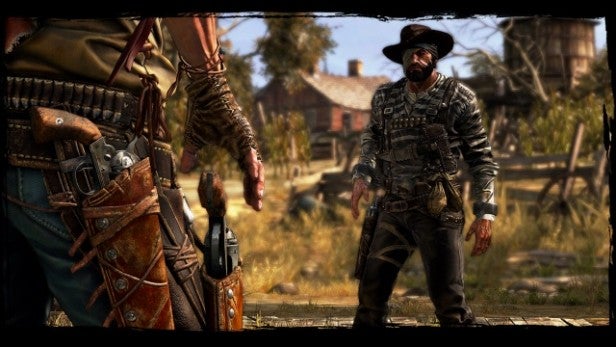 Call of Juarez: Gunslinger – Tall Tales of the Wild Frontier

Gunslinger is structured as the tales of a ragged old bounty hunter, told to the inhabitants of a low down frontier saloon. This gives the game a quickfire, episodic feel, and ensures that each mission is free to cover just the juicy parts, gleefully skipping any dull stuff.

What’s more, the positioning of each chapter as a tall tale lends the game plenty of room to mess around. The whole thing is narrated in the dry Western tones of the protagonist, and there are times when the action pauses and rewinds so that he can let you in on what really went down in the hours before he met John Wesley Hardin.

At one stage, the game even gives you three different versions of the same bank shootout, each one less reliable than the last. Spotting the gaps between what the narrator tells you and what’s actually happening on the screen is one of the game’s little joys. 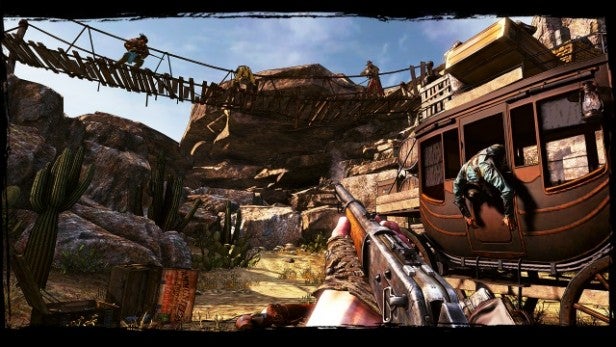 Still, that kind of slick narrative trickery is one thing, and decent gameplay quite another. Well, for the most part Gunslinger is yet another Call of Duty clone in Western drag. Objective markers practically drag you through each level, while enemies take turns loitering behind cover and taking potshots, or occasionally rushing to attack you. Blasting them before they blast you is the order of the day, and the use of iron sights on the left trigger and firing on the right is just what you’d expect. Gunslinger even has a CoD-style ducking behind cover healing system.

Yet underneath the surface it has some extra mechanics that tie brilliantly into the whole gunslinger premise. For a start, there’s a proper class system with experience and unlockable skills, allowing you to specialize in high-speed shooting, ranged weapons or a more aggressive, up-close approach, then build in skills for faster reloads, dual-wielding and more time and damage while in ‘concentration’ mode. 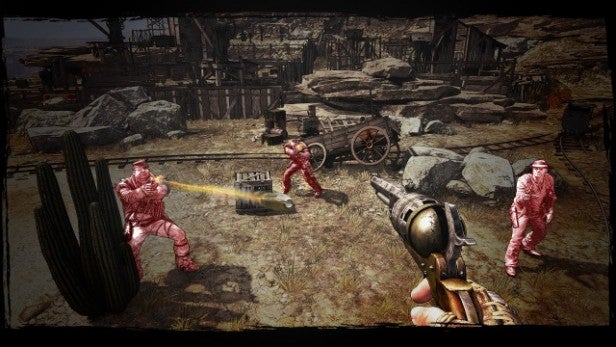 Concentration mode? Well, like previous Call of Juarez games, Gunslinger has a slow-motion ability – concentration – which you can activate at any time but which runs on a meter. Not only does this slow down time, it also highlights enemies against the landscape and lets you to dodge their bullets. With additional skills, you also get more time on the meter and extra damage on top. On top of this, you get extra experience and score by chaining kills together. As a result, using concentration wisely isn’t just key to survival in each mission, but also key to ratcheting up your experience points and score.