I must admit that I ignored Call of Juarez when it first appeared on the PC last year. Maybe it was because we were going through a glut of first-person shooters at the time, or maybe it came down to the fact that it had been developed by Techland: producers of Chrome Specforce, one of the most tiresome Sci-Fi FPS games I had come across in years. Whatever the reason, I’ve wondered since whether I made a mistake. A lot of quite sensible people have praised Call of Juarez. It’s been described as innovative and compelling; as a better attempt at the video-game Western than either Gun or Red Dead Revolver. Ubisoft obviously saw something in the game as well, picking it up for this revamped, enhanced, Xbox 360 conversion and an enhanced DirectX 10 PC version for the US. 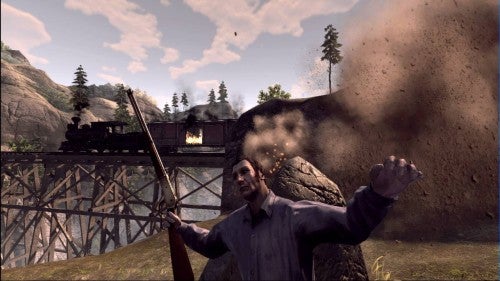 Graphically, the 360 version sits somewhere between the original DirectX 9 Call of Juarez and the DirectX 10 update, with reworked textures and enhanced HDR lighting and effects. Whatever the changes, the game looks great much of the time, with some of the most natural looking outdoor environments we’ve seen since The Elder Scrolls IV: Oblivion, and scenes bathed in the sort of warm lighting that wouldn’t have disgraced one of John Ford’s elegiac Western movie classics. From frontier towns to grassy highlands to spectacular desert canyons, Call of Juarez bends double to match expectations formed by a fistful of Sergio Leone movies and every Western Clint Eastwood has directed since The Outlaw Josie Wales. The character modelling is solid, and if the game struggles to create convincing interiors and dusty mines, it’s still a million miles away from the miserable, featureless work Techland churned out in Chrome Specforce. To be honest, the screens on these pages don’t do it justice: bar a slightly over-egged depth of field effect, Call of Juarez fares purty darn well for eye candy. 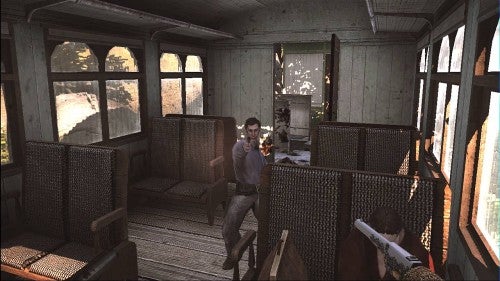 What’s more, those other critics were right to praise Call of Juarez for its innovation. Too many shooters recently have been keen to plough the same furrow: take the classic Doom template, add squad-mates and vehicles, throw in a few Halo-style, set-piece battles and tart it up with the best visual effects money can buy. Call of Juarez takes a schizophrenic path less well travelled. On the one hand, you play Billy – a misunderstood, half Mexican youth who can’t help getting into trouble. Framed for murder in the early stages of the game, he spends the rest of it on the run, sneaking through towns, mines and farmsteads, avoiding bad-ass banditos and rogue Apache braves. On the other hand, you also play the Reverend Ray – a gun-toting preacher straight from the Clint in Pale Rider school, dispensing lead and testament in roughly equal measure. 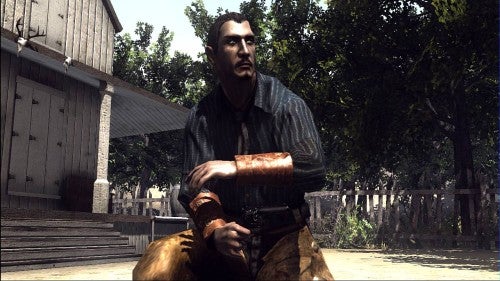 The fact that Ray is on Billy’s trail gives the game its most interesting dynamic. While Billy can fight with whip, pistol, rifle or bow, his relative weakness makes stealth the more sensible option. This means you spend approximately half the game hiding, sneaking, taking pot-shots from a safe distance and engaging in a little first-person platform-leaping action.

Ubisoft has apparently instigated changes that make these levels more action-packed and less frustrating than they were in the original PC release, and to be fair they rattle through at a fairly decent pace, with enemy AI that’s forgiving enough to make success possible, but not so forgiving that it becomes inevitable. However, for those of you who prefer the smell of gunsmoke to all that “yella-bellied” crawling, the Ray levels deliver it in spades. Everywhere Billy goes he seems to leave a trail of outlaw varmints in his wake, and delivering the Lord’s justice to them is just what Ray does best. 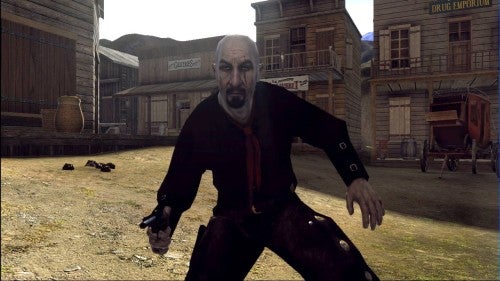 Thanks to a decent – though not quite F.E.A.R. level – enemy AI, a fine selection of hard-hitting pistols and rifles, and a solid grasp of how to stage a gunfight, the Ray levels are a blast. The revolver, your mainstay weapon, can be dual-wielded using the left and right triggers, and with limited ammo in each gun, you need to consider your shots and work tactically to survive. What’s more revolvers come in several different forms, with different levels of accuracy and damage, and guns grow unreliable – even dangerously faulty – after prolonged use. Nor is this a game where you can afford to be caught without ammo. While armoured, Ray isn’t invincible, and the game uses a Call of Duty 2 style health recharge system to keep you on your toes. Put all this together and you have some of the most satisfying gun battles I’ve enjoyed since F.E.A.R. 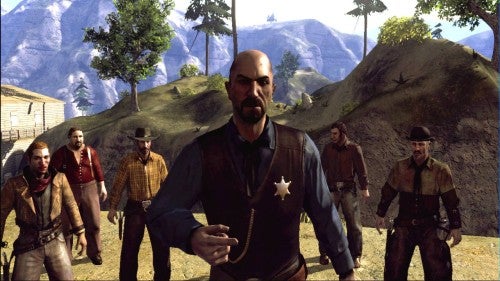 I don’t make the comparison willy-nilly, either. Call of Juarez’s gunplay demands the same considered approach as F.E.A.R., and the game even has its own equivalent of F.E.A.R.’s slowmo feature. Holster your revolvers, then click a trigger to draw and the game enters concentration mode. Time slows down to a crawl, and a pair of cross-hairs trail slowly towards the centre of the screen. You can move slowly for perfect aim, and – as the cross-hairs highlight a target – squeeze off a barrage of rounds. Wait for the cross-hairs to align, and the game goes back to normal speed and (hopefully) every low-down sinner in view will be slumped on the floor, choking. It’s the perfect way to simulate the sort of antics beloved of The Man with No Name or Django. One minute you’re every no-good’s target, the next you’re the last man standing. 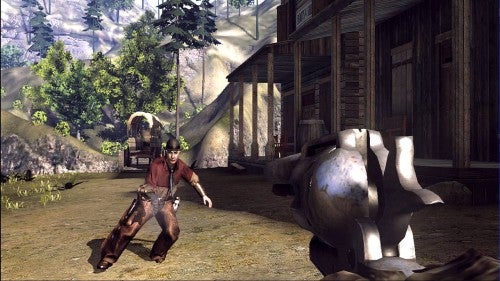 Up to a point, then, Call of Juarez is an excellent FPS. I really can’t say this enough. If you’re bored of your standard sci-fi or military shooters and looking for something with a different feel and mood, it comes highly recommended. It has looks, it has brains, it has atmosphere. It even has a cracking, finger-picked guitar heavy soundtrack and some very respectable voice-work. However, to enjoy it you have to be prepared to deal with a few rough edges, some of which will spoil your enjoyment overall.

The most serious problems affect you during the sequences where Billy has to leap from ridge to ridge or swing across gaps using his whip. The jumping controls just aren’t precise enough to make tricky leaps, and you’ll constantly find yourself falling to your doom and having to repeat long stretches. The checkpoint save system is superbly implemented most of the time, but it always seems to fall off at these points. We’re not talking Ninja Gaiden levels of chew-off-your-own-fist frustration, but be warned. The whip bits are actually worse, partly because the whip itself is a nightmare to target and control, and partly because the in-game physics seem to have gone on holiday where swinging is concerned. It’s hard to predict your swing, and ridiculously unrealistic. 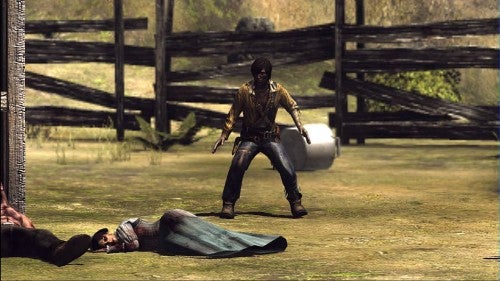 And it’s this lack of polish that spoils the game as a whole. Every now and then there’s something – a cut-scene, a poorly staged battle, an impossible section in Indian country – that reminds you that you’re not dealing with a major-league, triple-A product. Every so often there’s a bit of amateurish scene-setting that breaks the atmosphere and brings the mood flat down back to earth. You will find yourself amazed at the sharp-shooting abilities of outlaws and Apache braves who can hit you from miles away with what you later learn to be a rusty rifle. You will suffer the same bit of dialogue every time you fail certain stealth sections, no matter how many times you have heard it before. You may even be put off entirely by a pitiful initial training level of staggeringly workmanlike quality. Somebody should have spotted these things during testing, and sat on them fast. 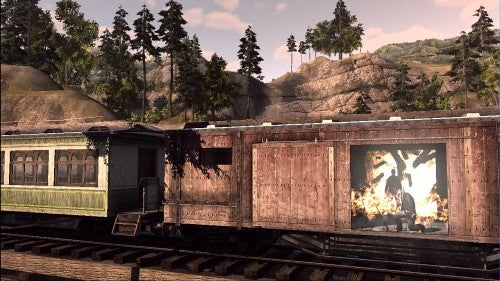 Those aren’t my only complaints. The environments aren’t particularly interactive, making you wonder why you can set fire to a saloon full of outlaws but not to a wooden structure packed with bandits, and many of the levels are as linear as anything in Call of Duty 2 or Medal of Honor. Sure there are horseback sequences, but these seem constrained and never give you anything more than a higher perspective and greater speed. In fact, the whole game has a floaty quality to the movement that goes against its rugged, down and dirty feel. For all its innovation, Call of Juarez simply isn’t as slick or well executed as Gears of War, GRAW2 or the 360’s other premier shooters. 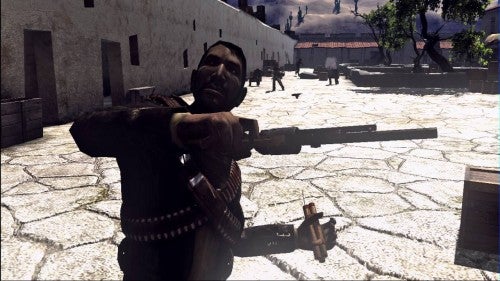 That’s why I’ve been relatively stingy with the score at the bottom of this page. Despite its merits, Call of Juarez isn’t quite the game it could have been with only a bit more attention to detail. It does, however, show considerably more imagination and ingenuity than a number of bigger name shooters, and it’s a good platform on which Techland could – given the chance – build a fantastic sequel. Given the leap in quality between Chrome Specforce and this, I wouldn’t say that was out of the question. More to the point, should Call of Juarez 2 appear I’ll be far less inclined to ignore it. In fact, I’ll be one of the first in line to take a look.


Enhanced for the Xbox 360, Call of Juarez scores high for its tackling of an under explored genre and its interesting game mechanics. Only a lack of fine tuning and polish prevent it being a full-on fistful of dynamite.