It’s not an easy time for a new single-player RPG. Over the last two years, even hardcore fans have begun to concede that the future is probably online. Take a world of the scale and beauty of World of Warcraft’s Azetoth, fill it with thousands of players, and you have an environment that – in terms of richness and variety – is impossible for any conventional RPG to match.


So the surprising thing is that The Elder Scrolls IV: Oblivion doesn’t just hold up, it actually reminds you that there are things that a single-player game does best. As a result, the difficulty is all mine, for the simple reason that there’s so much here to see, do and experience that this review is only going to scratch the surface. Slapping a verdict and a score on a game like this is a bit like doing the same for a two week visit to New York – anything I say might not necessarily be reflected in your own experience of the game. 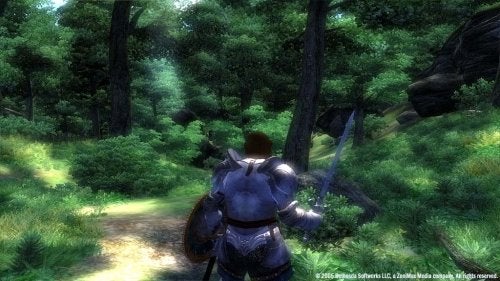 Of course, there are some areas where there just isn’t room for any difference of opinion: whatever you think of its gameplay, there’s no question that Oblivion looks utterly fabulous. The opening sequence in a grotty dungeon and a cobwebbed tomb only gives you an inkling of the delights to come, but surfacing near a river, with a view out towards the mountains and forests of central Cyrodiil is one of the great ‘wow’ moments in gaming. On some level, we’ve seen it all before – the use of instancing to create lush areas of natural foliage; HDR lighting with sweet bloom effects; specular highlights on armour and water; parallax mapping for rich texture detail – but on another we haven’t. Oblivion takes these techniques, some already turning into this generation’s equivalent of lens flare, and transforms them from technical achievements into artistic ones. Whether you’re exploring the imperial city on foot, tramping through ruins or riding through a mountain pass on horseback, there’s always a temptation to stop, pan the camera around and simply take the scenery in. The lighting on its own is just lovely, with so distinct a warmth and presence between the red glow of sunset and the harsh, blue lighting of midday that you’re tempted just to hang around and watch the light swell and fade over mountain valleys. 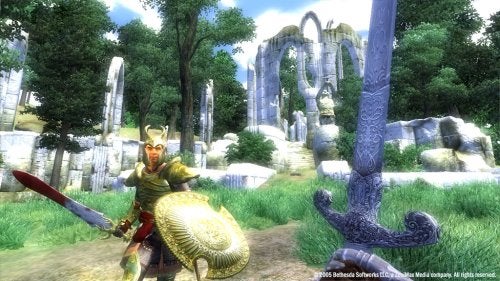 OK, so there are some complaints that hold true – there are odd patches of rough texture sometimes visible on faraway hills, you do suffer an intrusive ‘area loading’ message every ten seconds or so while you’re exploring (though the game only breaks to load when you move between an indoor and outdoor location). But moaning about these details is a bit like going to see the Mona Lisa and whinging that it’s too small. No-one else is listening – you’re only spoiling the experience for yourself.

It helps that the world itself is so beautiful, not just in terms of geography, but in terms of production design. It was obvious from Morrowind that Bethesda had a special vision for its world; one that successfully blended a range of fantasy influences with Nordic and even Eastern traditions to create something rich and powerfully mythic. With Oblivion, it’s outdone itself. Visit the northern city of Bruma, then travel to a central town like Chorral. Look at the differences in dress, architecture and decoration. Then find your way down into an ancient, mist-wreathed crypt. Gawk at the carvings, and wonder at the way cold light flows into the chamber. We’ve had gorgeous RPGs before – Final Fantasy X, Guild Wars, Jade Empire – but Oblivion takes things to a whole new level. 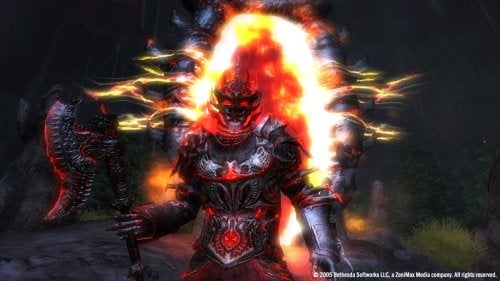 What’s more, it uses this beauty like a snare. The word “immersive” doesn’t do the game justice – Oblivion comes closer than anything yet to creating a fantasy world full of distinct locations and individual people. The hordes of NPCs look different, dress differently and have their own routines, their own take on life and – frequently – their own aims and objectives. Admittedly, this makes it all the more frustrating when they repeat the same sentence you’ve heard umpteen times before or fail to notice the two corpses you’ve left slumped beneath the bar since a failed ambush three days ago, but there are times when you just have to cut the game a little slack. Oblivion’s world isn’t perfect – and you can never beat an MMO if you want to see a world teeming with real life – but it’s a long way on from any single-player game we’ve seen before. 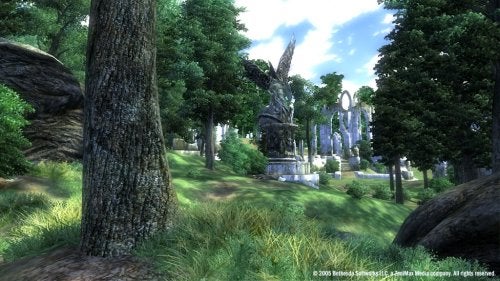 And all these elements come together to form a world you really can explore your way. Oblivion is better paced than Morrowind for novices, in that it throws you straight into the central plot and never fails to signpost where you need to go and what you need to do next, but it has so many other missions and sidequests that you can spend days ignoring the plight of the Empire should you wish. You won’t, first because the plot is so compelling, but also because you’d miss out on some of the games biggest treats. For example, nothing beats storming into the hellish realm of Oblivion – a dark world straight out of Capcom’s most bloody fantasies. Striding through its wracked, red landscape towards a sinister tower, fighting shoulder-to-shoulder with a nervous squad of guards through corridors of bone, torn flesh and monstrous claw, gives you an authentic ‘hero’ feeling that few other games can touch.

So, this is where a single-player RPG still comes into its own. MMORPGs can make you feel like a hero – though frequently they make you feel like just another working stiff on the daily grind, bashing monsters and grabbing the loot – but they rarely make you feel like THE hero: the guy who’s facing up to the darkness and bringing order to the realm. Oblivion frequently does just that. Like Lionhead’s flawed classic, Fable, you feel that your actions have consequences. Save a city, and news of your exploits spread. Kill needlessly, and your notoriety precedes you. You’re always at the centre of the story, not scuttling around somewhere around the periphery, struggling to make your own mark. 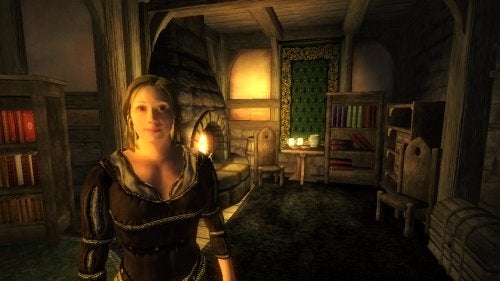 That said, nobody could blame you for getting distracted. After all, there are guilds to join, an arcade university where you can build your magic skills, a dark brotherhood of assassins on the look-out for murderers to sign up, and even a gladiatorial league to get involved in. Plus, you might want to study the finer points of lock-picking, armour repair, alchemy or speechcraft. The more people you meet, the more missions you’ll uncover and – praise be – these go way beyond the usual “kill the five rats in my basement” nonsense. So far, I’ve put two brothers back in touch and cleared their home of trolls, tried to uncover the truth behind a half-orc hero’s background, looked for signs of dodgy dealings from a corrupt city merchant, and attempted to solve the mystery of a stolen painting. And that’s just selected highlights.


Look at it another way. In the time I’ve played Oblivion I would have completed most games, so why do I still feel like I’m scratching at the surface? So much depends on the type of hero or antihero you want to be and the way you want to play, that you could easily play through the game two or three times and have a different experience each time. Buy this now, and you could still be coming back to it two years down the road. 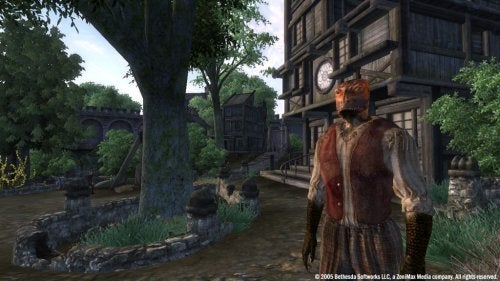 Perhaps more importantly, you don’t have to be a dyed-in-the-wool RPG nut to get a similar buzz. Oblivion takes huge pains to make you feel welcome, with simple ideas like an instant travel option on the main World map, or an autosave when you perform certain actions or enter new environments. The interface is perfectly tailored for the Xbox 360, with a tabbed menu available at the touch of a button, arranged into broad topics (inventory, spells, maps and quests) which you flick through quickly using the trigger buttons. The game even handles difficulty intelligently, matching the level of hostile critters and dungeon dwellers to your own current standing, and with a slider to fine-tune further should you find the real-time combat hard going.

And the importance of the words ‘real-time’ shouldn’t be underestimated. Finally, how you swing your sword and block with your shield makes a difference. Bows and arrows are actually useful, and your sorcerous blast of fire could miss because your aim and timing are out, not just because the stats say so. Levelling up and allocating skills points is still vitally important, but there’s a greater sense that skill, courage and strategy count. You can sense that, while Bethesda haven’t turned away from the path of the true RPG, they haven’t been afraid to learn from other genres, including console action RPGs and PC action games. 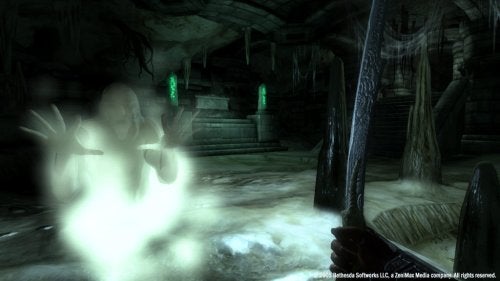 Needless to say, this is a hugely addictive epic, and one you’ll spend days locked up playing when you could be out enjoying the spring sunshine. Apart from the minor quibbles mentioned earlier, it would be flawless: even the dialogue and voice-work is top notch. Sadly, however, I do have to dock a point for the worst possible reason: bugs. During the hours I’ve been playing, I have had the game freeze and crash on several occasions, and that seems unreasonable for a console game – even one as ambitious as this. Save often is my advice.


That word of warning over, I can only recommend that you pick up a copy of Oblivion as soon as humanly possible, even if you have to buy a new graphics card or an Xbox 360 to play it. It’s the sort of landmark game that makes such purchases worthwhile. 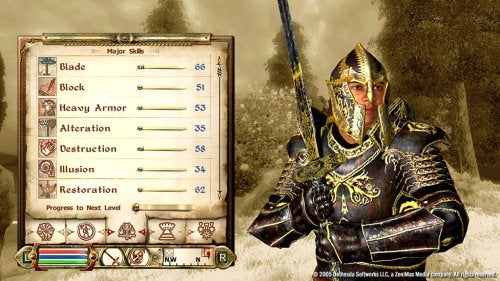 
Easily one of the finest, most engaging RPGs of any era, and a stunning advert for the world-crafting capabilities of a new generation of games machine. If you have the time to spend, Oblivion has all the adventure you need to fill it.