This stylish three-channel soundbar looks gorgeous and sounds fantastic – but a hefty price and lack of key features make it hard to recommend.

The Bowers & Wilkins Formation Bar is a three-channel soundbar that forms part of a multi-room and multi-channel system based on the company’s proprietary mesh network.

The Formation Bar isn’t cheap, but it clearly benefits from Bower’s eye-catching design and speaker know-how. However, in the absence of any HDMI connections, lossless support or even a remote control, does it sound good enough to justify its hefty price?

The Bowers & Wilkins Formation Bar certainly looks like a high-end product, with a stylish design based around a cylindrical shape that tapers at each end. The majority of the soundbar is covered with a black fabric grille stretched over a diamond-shaped honeycomb frame. There are also brushed metal end plates that add a nice design flourish. 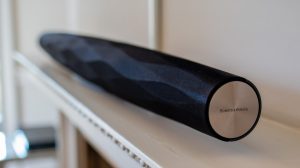 You can choose to either stand or wall-mount the Formation Bar, and the build quality is excellent, with a well-engineered feel to the chassis. The emphasis is on minimalism, with no display and virtually no controls on the soundbar itself. All you’ll find are play/pause, volume and Form buttons located at the top rear, but if you’re thinking you can just use the remote instead, you’re in for a shock. 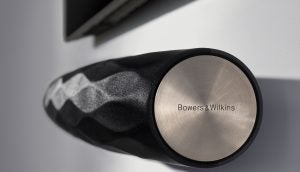 Incredibly, despite its asking price, the Formation Bar doesn’t come with a remote included. You’re expected to either use the Home app (iOS and Android) or learn certain IR commands from your TV remote. While the latter is fine for basic control, if your TV remote uses RF then you’re forced to use the app – and who wants to take out their phone every time they want to change volume? 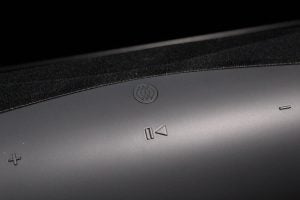 The app does at least offer a well-designed user interface, making it effective for setting up the Formation mesh network, and adding new devices to it. However, as a remote it’s fairly basic. This is an area where more work is required from Bowers & Wilkins, because many of the control aspects are delegated to third-party apps, which limit its usefulness.

The Bowers & Wilkins Formation Bar is well specified in certain areas, although the emphasis is very much on sound quality rather than the features more usually associated with soundbars. Not surprisingly for a speaker manufacturer, B&W appears to have focused the majority of its attention on the drivers inside that shapely chassis.

The Bar uses a three-channel speaker layout, with each speaker comprising a 25mm “double dome” tweeter and two 65mm woven glass-fibre cone mid/bass woofers. There’s 40W of digital amplification for each driver, with a claimed frequency response of 40Hz to 28kHz that’s enhanced by digital signal processing and a dynamic EQ feature. 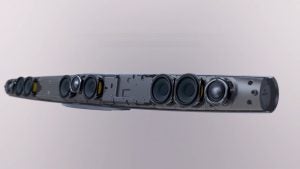 The inclusion of a dedicated centre speaker is good, and the drivers are optimally positioned to deliver a wide soundstage. The Formation Bar can also deliver surprisingly deep bass. However, in most other respects it’s rather lacking.

For a start, it’s limited to decoding lossy audio formats such as Dolby Digital, so you can forget immersive formats like Dolby Atmos and DTS:X.

Bowers & Wilkins has dedicated most of its efforts into developing the technically sophisticated and robust Formation mesh network, which can stream audio at a resolution of up to 24-bit/96kHz. The system is designed to use both the 2.4GHz and 5GHz frequencies found in a normal wireless network, so information reaches the Formation Bar via its 2.4GHz receiver.

Any other Formation devices use the 5GHz frequency to communicate with each other over the mesh network, which provides the added benefit of a claimed delay of just 1 microsecond. In addition, because the various Formation products are communicating via their own network, they aren’t taking up bandwidth on your home router. 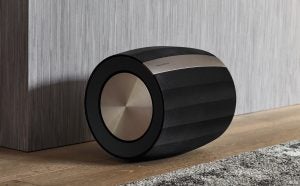 The problem with Bower’s implementation is that in order to get the most out of your Formation products you need to spend additional money. All the Formation products include Wi-Fi, Bluetooth 4.1 aptX HD and Apple AirPlay 2, but if you want the full 24-bit/96kHz experience then you’ll need to get Roon, which requires an additional annual fee of £95/$119.

In the case of the Formation Bar there’s a more specific issue: if you want to improve the low-end performance or add surround channels, you need to buy the Formation Bass subwoofer (£899/$999) and a pair of Formation Flex speakers (£399/$495 each). As a result, the total cost of building a wireless 5.1-channel system will set you back around £2700/$3200, and it’s still restricted to lossy audio codecs. 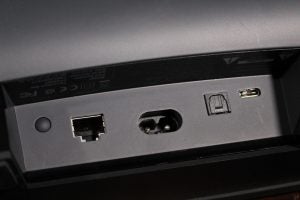 The reason the Formation Bar can’t support lossless audio codecs is that it doesn’t have any HDMI connections. At the rear all you’ll find is an optical digital input, an Ethernet port for a wired connection, a USB port for service diagnostics, and a two-pin connector for the power cable. The Formation Bar is aimed at the custom install market, which often avoids HDMI to bypass CEC issues. Even so, the lack of any HDMI connections is disappointing for a soundbar at this price point.

Bowers & Wilkins Formation Bar performance – Impressive, but you’ll have to pay extra for a surround-sound experience

The Bowers & Wilkins Formation Bar is incredibly easy to setup, although given its lack of features and connections, that shouldn’t come as a massive surprise. All you need to do is place it in front of your TV using the stand or wall-mount, whichever works best –if you stand-mount then be aware that at a height of 10.9cm the Formation Bar is likely to block many modern TV screens. Then, all you need to do is connect the Formation Bar to your TV using the provide optical digital cable.

As far as your TV goes that’s it, but you’ll need to set up the Formation network using the Home app. To start this process, press the Form button on the Bar; this will then connect to your home Wi-Fi network. Once complete, your Formation Bar will play an audio prompt to confirm successful setup. The soundbar is also paired with a Bluetooth device using the Home app, and if there’s a firmware update available then the app will notify you and automatically install that as well. 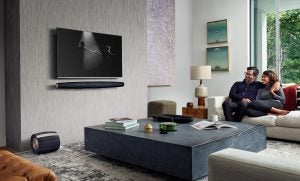 There’s no denying the Formation Bar delivers an impressive sonic performance, with a wide front soundstage and plenty of power. The mid-range is extremely well defined, and the higher frequencies are delivered without ever sounding sharp or harsh. The inclusion of a dedicated centre channel ensures that any dialogue is clear and focused on the screen, and the low-end is good, but the bass never feels as deep as the 40Hz claimed by Bowers & Wilkins.

Not surprisingly, given the company’s experience in speaker manufacturing, the Formation Bar sounds particularly good with music. The stereo imaging is excellent, with incredibly precise placement of instruments within the soundstage. This musical prowess extends to TV shows, where the score or any other music is spread either side of the TV. Effects are also placed around the screen with precision, while any dialogue retains an impressive level of clarity. 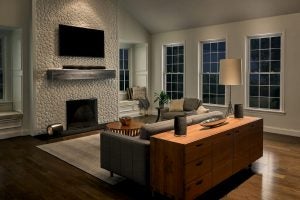 When it comes to movies, the performance is also good – but the limitations are more apparent. First of all, the processing is restricted to lossy Dolby Digital, although most people probably wouldn’t actually notice. What’s more obvious is the general lack of low-frequency depth, and the absence of any surround channels. All the audio is prioritised to the three front channels, and if you want to expand the system to include a subwoofer and surround speakers, it’s going to cost a packet.

This is the main problem with the Formation Bar, it just doesn’t offer enough when for the same price the competition is including a separate wireless subwoofer and upward-firing drivers for immersive audio support. Is looking good and sounding great still enough? Probably not when cheaper soundbars include lossless object-based formats, high-resolution audio and built-in smart assistants. If you’ll pardon the pun, the bar has been set very high in recent years, and the Formation Bar fails to clear it.

You should buy the Bowers & Wilkins Formation Bar if…

The Bar will appeal to custom installers who want an attractive product that they can connect using optical digital as part of an integrated system.

If you’re already invested in the Formation range of products, then it makes sense to add the Bar and boost your TV’s sound quality while also enjoying high-resolution audio.

You shouldn’t buy the Bowers & Wilkins Formation Bar if…

However, if all you want is a soundbar then the Formation Bar makes less sense. There’s no denying it looks stylish and delivers a superior sonic performance, but it lacks the majority of features you’d expect from a modern soundbar at this price.

The lack of any HDMI connections seriously limits its potential, with no ARC, CEC or lossless audio support. As a result, you can also forget about immersive audio, and you don’t even get a remote control.