While the LE-58GCL’s pictures do manage to get a few things right – they can never fairly be described as awful – they fail to set any new standards even for the budget TV market.

Starting with what I consider to be the most important aspect of a TV’s pictures: black levels and contrast. Here, the LE-58GCL does a just about tolerable job. Certainly, it manages to deliver a slightly deeper black colour than some budget TVs I’ve seen, and it’s also capable of holding on to a respectable amount of shadow detail in dark areas.

It doesn’t suffer much from strong clouding issues in dark scenes, either, which can affect many LCD TV backlights – including those on much more expensive models.

Aggravatingly, though, a fairly pervasive blue tone hangs over dark scenes and black areas. It’s something you’re constantly aware of, and which routinely “pollutes” the TV’s colour palette. And, as already mentioned, there are no tools here with which I could have tried to subdue this invasion. 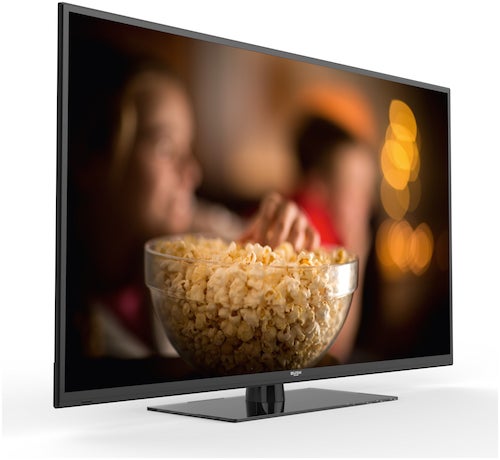 My review sample exhibited noticeable vignetting, too, where the edges of the image tend to look slightly brighter and show a marginally different colour tone to the rest of the picture. And again, this tonal difference is based on an over-infusion of blue.

You can reduce both the overall blue look to dark scenes and the vignetting by lowering the LE-58GCL’s brightness adjustor – but only at the expense of the strong shadow detail response.

A separate backlight adjustor might have helped us work out a decent balance between brightness, black level and shadow detail.

As I’ve hinted at already, the LE-58GCL’s colours are a mess. As well as the pervasive blue tone and vignetting, colours look rather simplistic overall.

This is presumably down to the fact that the TV doesn’t have the processing power to resolve nearly as many colour tones/nuances as the other 4K TVs we’ve tested. This can result in areas of striping and the occasional plastic look to skin tones. In addition, the colours that do appear don’t look quite right; they’re neither natural nor particularly vibrant.

Surprisingly, given the lack of colour refinement, the LE-58GCL isn’t bad at showing native 4K content – assuming you’ve added an external source capable of delivering it, that is.

Certainly there’s a visible step up in resolution and clarity as you move from HD to 4K UHD, which is underlined by the relatively large screen size of this Bush model. Also, the LE-58GCL doesn’t push its sharpness to a point that UHD pictures begin to look unnatural or gritty.

Clearly the lack of colour resolution versus the best 4K TVs out there means there’s a limit to the LE-58GCL’s texture playback with native 4K material, but that limit seems to me tolerable on such an affordable TV.

With the LE-58GCL’s video processing failing to blow us away so far, it’s a surprise to find that the set is an acceptable upscaler of non-4K sources.

I wouldn’t go as far as to say that the resulting images are much beyond the level of HD, but at least any noise present isn’t exaggerated by the pixel remapping process. The only complaint here is a slight ringing around particularly narrow image elements such as hairs and spectacle frames.

One final strength of the LE-58GCL is the brightness of its pictures, which is certainly a good few notches above most budget models.

I’m not talking here about output that can rival that of some of the new breed of HDR-capable TVs, but the LE-58GCL is better equipped to serve a bright-room environment than many cheaper TVs.

Used as the main TV for the review period
Tested for more than a week
Tested using industry calibrated tools, discs and with real world use
Tested with broadcast content (HD/SD), video streams and demo discs
Previous
Bush LE-58GCL Review Next
Sound and Conclusions Review