Available exclusively from Argos, the Bush LE-58GCL is a 58-inch 4K UHD LCD TV that can be bought for a smidge below £800. As is usual with Bush products, this is an appealingly aggressive price, which begs the question: what features has it had to trim to get there?

Aside from offering a healthy chunk of screen acreage for the money, the LE-58GCL is aesthetically pretty straightforward. The black screen frame is reasonably thin, but also looks a little plasticky, and the sculpting is from the “it’s just a rectangle, really” school. Of pleasant surprise. however is the glass-topped, heavy-duty desktop stand, which attempts to introduce some class to proceedings.

Connections on the LE-58GCL are promising. There are four HDMIs, including provision for the HDMI 2.0 standard – which lets you play 4K content at up to 60 frames per second. Also included is a USB port for multimedia duties, while a LAN port raises hopes of smart features and multimedia streaming over your home network.

However, closer inspection reveals that the LE-58GCL’s connectivity isn’t nearly as solid as it initially appears. First – and worst – it turns out that the LAN port, which isn’t accompanied by built-in Wi-Fi, is only present as required support for the built-in Freeview tuner. It isn’t possible to go online with any apps, and you can’t even stream multimedia from other devices over your network.

It’s been so long since I’ve come across such a “disconnected” TV that I actually assumed such models didn’t exist any more.

This lack of access to the online world has huge ramifications for the LE-58GCL, given that for now at least the only source of native 4K content with which to feed its 4K screen is the streaming apps of Netflix and Amazon. Neither of which can be accessed through this TV.

As a result, you’ll be restricted to external devices for your 4K content – such as the latest Amazon Fire TV box, the upcoming Ultra HD Blu-rays, and possible future 4K-capable set-top broadcast receivers. This is hardly ideal situation, especially since each external option will require extra outlay beyond the cost of the TV. 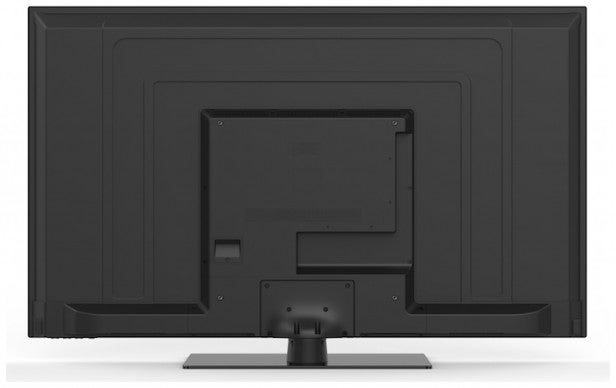 The lack of smart/online features isn’t the only issue to count against the LE-58GCL; amazingly, it doesn’t have an HD Freeview tuner either! Yes, you’ll only be able to watch standard-definition digital broadcasts via the tuner on this Bush’s 4K UHD screen, made all the worse by the fact that such broadcasts look soft and ugly once they’ve been remapped to a UHD screen.

Pretty much the only multimedia connection that lives up to modern-day expectations is the USB port, which can play video, music and photo files into the TV from USB storage devices, or enable you to make recordings from the TV’s tuner to a USB hard drive. Mind you, given the USB port’s dual functionality, it would have been helpful if Bush has included at least two of them!

Unfortunately, the LE-58GCL’s stripped-down feel extends to its picture set-up features. Aside from the basics – colour saturation, contrast, brightness and so on – seen with all TVs, the only options of note are a noise-reduction system and a multi-level motion-compensation circuit (confusingly called MEMC in the TV’s menus).

There’s no backlight adjustment to provide finer control over the TV’s black level. There’s no dynamic backlight system – or at least, nothing you can manually tweak. There’s no colour management, no white balance control, no choice of gamma settings; it’s strip-down central here.

I guess it would be possible to live without such set-up features if the LE-58GCL delivered great picture quality right out of the box. But, as we’ll see, it doesn’t.

It also shouldn’t be a surprise to learn that the LE-58GCL doesn’t support 3D or high dynamic range playback.

As already discussed, the LE-58GCL doesn’t have many picture set-up features. Of those it does include, the noise-reduction system should be left turned off permanently – the level of softness and blurring it adds to any source is horrendous. You’re simply replacing one sort of noise for another.

Bush’s MEMC motion-compensation feature, on the other hand, is worth using. Only on its low level, however, since without it some quite uncomfortable judder becomes evident at times – although LCD motion blurring isn’t actually too bad so long as the NR circuitry is kept off.

Since the LE-58GCL doesn’t have any backlight or dynamic contrast adjustments, the only tips I can offer to try to improve picture quality are to nudge the contrast up a couple of levels from its default position – using the Personal preset – and lower the brightness by a few notches.

The absence of any further comprehensive picture-tuning options is a real shame, since I have a suspicion that there’s potentially some solid picture quality hiding away in the LE-58GCL if only I’d had the tools to unlock it.