This is the entry-level machine in Brother’s refreshed ‘Occasional A3’ all-in-one range. Even at just over £100, though, it still has a strong feature set, which includes duplex print, touchscreen control and, uniquely at this price, A3 printing. Designed for the home or home office, it also has a surprisingly small footprint.


The smart, black and white case has rounded ends and a flat topped, single-sheet, flatbed scanner. The front panel has a flip-down cover at the left-hand end, revealing a USB socket, along with SD and MemoryStick card slots. At the right-hand end another cover conceals the four, single-colour ink cartridges, available in standard and high-yield versions.

In between these two is a pull-up control panel, with a 68mm touchscreen and three illuminated touch buttons. The touchscreen’s surprisingly responsive for a low-cost machine and the buttons are easy to use, too. 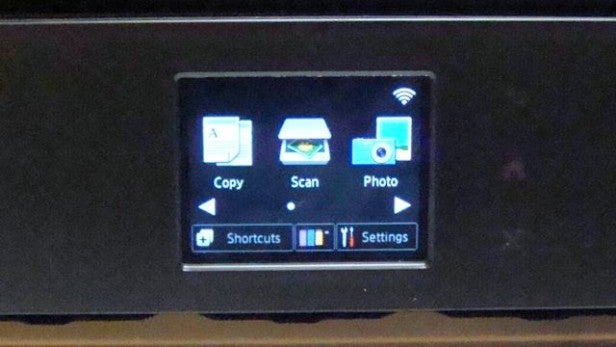 
The single front paper tray loads paper in landscape orientation – one way Brother keeps the footprint of the printer small – although the hinged cover makes it a fiddly, two-handed job to replace paper or swap between A4 and photo blanks.

A second, single-sheet feed folds out from the back of the printer, and this is where you can load a sheet for A3 print.

The main USB connection sits underneath the scanner section, which hinges upwards to reach it. Most will use the wireless connection, though, as this opens the machine to a wireless network, direct printing from Wi-Fi Direct or AirPrint, and remote print with Google Cloud Print.

Brother claims 20ppm for the
DCP-4120DW when printing mono and 18 when printing colour. These are ISO
figures, but still pretty wishful, as they don’t include preparation
time, which can be as long as 20 seconds – a big proportion of the whole print
time in a short job.

We saw a mono print speed of 7.7ppm on a
five-page print job, rising to12.1ppm on our 20-page test. This is still
some way off the quoted figures, but is good compared with rival
machines in the same price bracket. A duplex version of the 20-page job
gave 6 sides per minute, which is again fair for an entry-level
all-in-one.

A five-page colour print gave 6.5ppm, little more
than a third of the claimed speed, but again in the same range as its
competitors. An A3 colour page took 41 seconds and a colour A4 copy took just
20 seconds. 15 x 10cm colour photos took around 1:45, though for some reason
print from the USB socket took over four minutes. 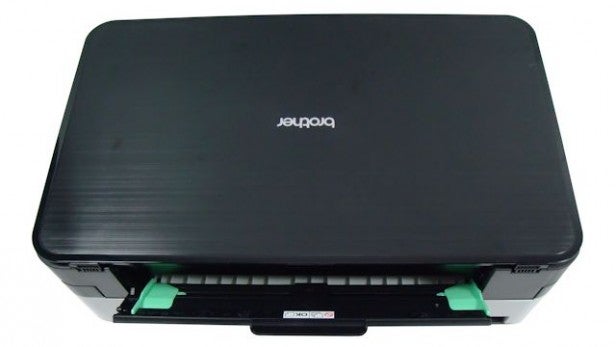 Brother
printers use a piezoelectric printhead and, as with Epson machines, the
technology doesn’t give as smooth a finish as the thermal print head in
Canon and HP machines. Text print is fair, though a little jagged
around emboldened headings and text is well registered over areas of
coloured fill, though colours are a little lacklustre on plain paper.

A
colour copy loses quite a bit of the colour depth of an original,
though photo prints are clean and natural, with a fair amount of detail
in difficult to render, darker areas.

Feeding paper sideways
through a printer is not as easy as doing it top to bottom, because of
the grain of the paper. To stop the paper jamming, Brother ‘flutters’
each sheet as it feeds it. This is very effective in preventing jams,
but also very noisy, with peaks of 70dBA measured at half a metre. 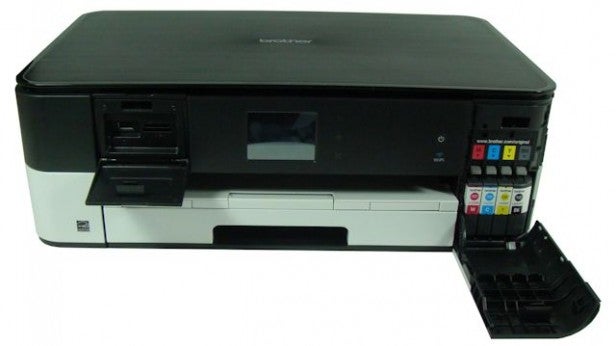 Using
the higher yield of the two sets of available cartridges give running
costs of 2.5p for mono pages and 5.7p for colour. Both these figures are
good, compared with many of its rivals with, for example, the HP OfficeJet
5740 offering 4.1p and 9.3p, respectively.


The only real snag with this machine is that, for £13 more, you can get
the
Brother MFC-J4420DW. This offers an ADF, fax and lower running costs
(different cartridges). That machine has no memory card slots, but even
so, you appear to get a lot more for your money with the MFC-J4420DW.

Brother’s DCP-J4120DW is an excellent, low-cost
all-in-one with a lot going for it. It prints fast, can handle single
sheets of A3 and works with just about any wireless device,
desktop or mobile. Print quality isn’t as good as from some rivals,
though, and Brother’s own machines in the same range present strong
competition.

Next
Print Speeds and Costs Review