In the planar magnetic world, the Brainwavz Alara are one of the more affordable pairs. They don't sound as great as Grado's SR325e open-backed dynamic driver effort nor as comfortable as Audeze's Sine closed-backed planar, but if you're after a taste of the exotic at not too exotic a price, the Alaras are worth a shout

Brainwavz is a Chinese headphones brand, one that’s quietly building a sound reputation for decent products at eye-catching prices. These Alara over-ears are the company’s most expensive model of headphones so far.

“Planar magnetic” refers to the way the headphones produce sound. Unlike the more common dynamic driver methodology, planar magnetic headphones use a relatively large, super-thin membrane with an embedded wire pattern, suspended between opposed magnets. When a current is passed through this pattern, the membrane produces a magnetic field that reacts with the field of the fixed magnets and moves, producing sound.

Planar magnetic technology is desirable inasmuch as it promises low distortion and fast response. It’s less desirable because it tends to be relatively expensive – the Brainwavz Alara are about as affordable a planar magnetic design as you’ll come across.

And yes, these headphones are really quite large.

Brainwavz Alara design − heavy on the head weighs the Alaras 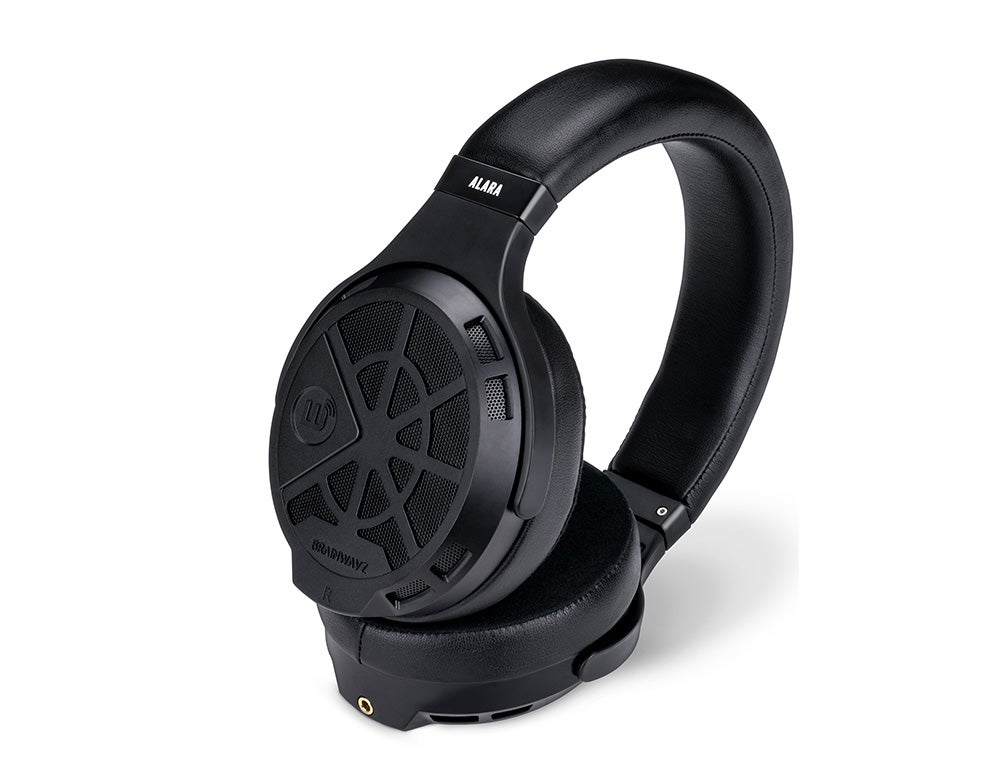 The outside of the earcups sport a metal design, arranged in a vaguely target- or web-like pattern, and the arms that hold them in place and allow them to pivot are metal too. This goes some way to explain the Brainwavz Alara’s not-insignificant 430g weight.

All the points of contact (the earcups and headband) combine pleather with a dash of velour for a comfortable, slow-to-warm fit that looks and feels up to standard for headphones of this cost. Branding is bold across the top of the headband, but overall the appearance of the Alaras is grown-up and understated.

Brainwavz has opted for an open-back design  with the Alara headphones – and, as a consequence, they leak sound from the back of the earcups quite freely.

The open-backed configuration has unarguable benefits when it comes to the spaciousness of the sound of headphones, but it makes them a strictly at-home-listening proposition – unless you’re staggeringly inconsiderate. In which case I hope never to encounter you whilst you’re wearing your Brainwavz Alara on public transport. 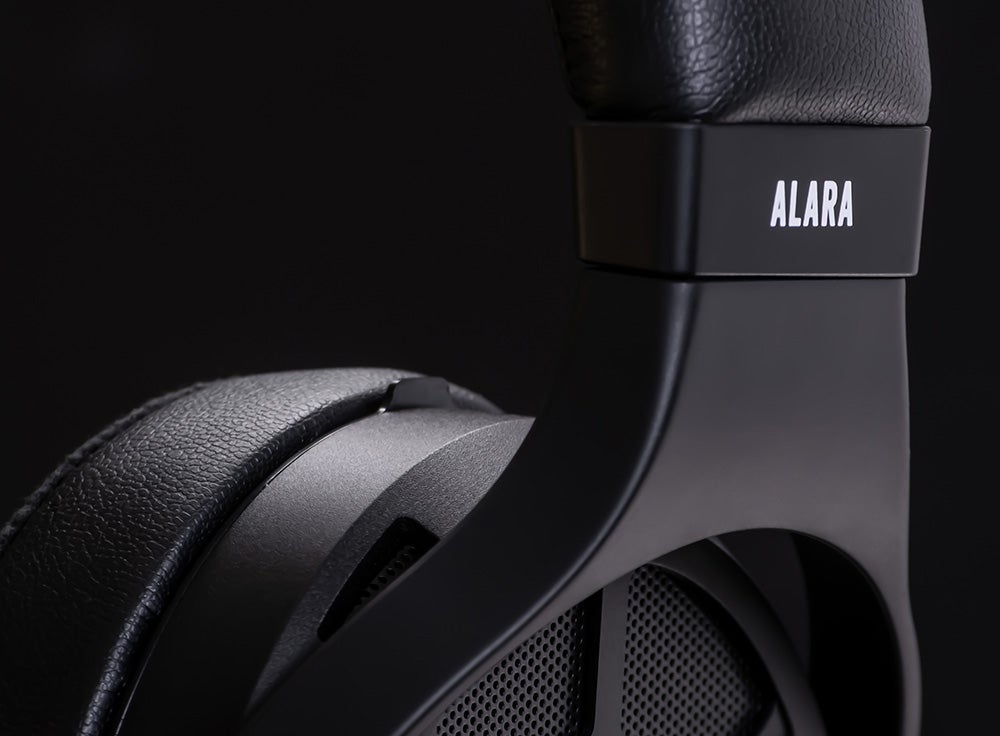 Brainwavz quite obviously considers the Alara an indoor headphone, which is the reason they feature a detachable woven cable that clicks into each earcup. It’s 2 metres long, so should reach comfortably from your headphone socket to your favourite chair, and terminates with a 3.5mm plug. There’s a 6.3mm adapter in the package, along with a spare set of earcup pads.

As mentioned, weight is a bit of an issue with the Brainwavz Alara, and that’s exacerbated by the way they fit. I’m 6-feet tall (on a good day) and I like to think my head is of proportionate size – but the Alaras feel a little too big for me. At their tightest adjustment they feel like they’re sitting too low on my ears – so anyone with a head smaller than mine is likely to feel swamped by these headphones.

Make the best of the fit, come to terms with the weight and plug the Alaras into an appropriate source (the Brainwavz, with their 20-ohms impedance, are easy enough to drive to decent volumes even using smartphone, although they deserve better than that). These headphones don’t take much time to reveal themselves as a detailed, well-defined and really quite snappy listen.

“Turn the Light” by Karen O and Danger Mouse sounds warm and punchy, the Alaras locking into the uber-disco tempo and propelling it forward subtly but insistently. The vocal is framed at the front and centre of the soundstage, underpinned by disciplined, substantial low frequencies and topped off by judicious treble sounds. All of the frequency information is integrated well, even though the Brainwavz give each individual instrumental element plenty of space in which to operate. 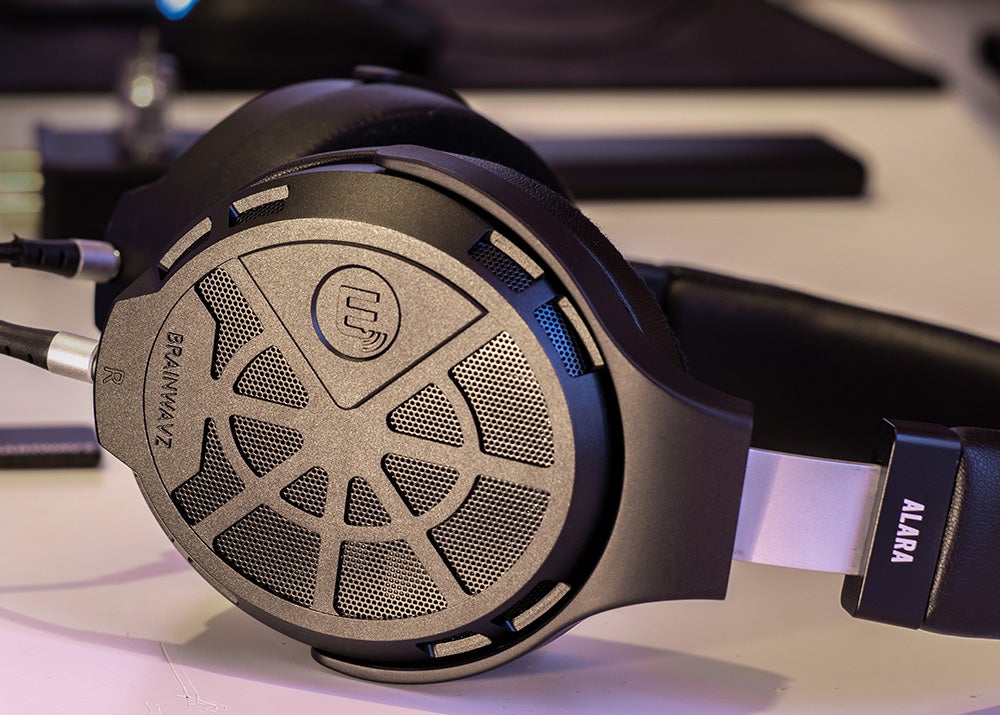 This impression of elbow room means the horn section during Joan as Police Woman’s “Anyone” sound like three distinct instruments rather than just the brass blare lesser headphones describe. The same tune illustrates just how agile the Brainwavz Alara are with bass sounds, which dig deep and have ample texture but start and stop with absolute certainty.

By the standards of planar magnetic designs, there isn’t a huge amount of width to the stage the Alaras describe, but there’s convincing focus and, as can’t be overstressed, plenty of space on there for everyone to do their thing. Even a hectic melange such as Aphex Twin’s “Come On You Slags!” is organised and controlled even while it seems to gather momentum.

There’s a sense of refinement here that almost certainly comes from a slight rolling off of the highest frequencies – there’s a fair bit of bite in the Aphex Twin, certainly, but that last pinch of grit and attack has been dulled in the name of good taste. But unless the source you’re listening to has a similarly safety-first emphasis at the top end, it’s unlikely to become a problem.

Why buy the Brainwavz Alara?

The planar magnetic experience isn’t often available at such an agreeable price as this, and the Brainwavz Alara embody much of what listeners love about the technology: they’re fast, detailed and spacious. However, anyone auditioning them will have to make certain concessions regarding weight and fit – they should also be made to swear an oath never to listen to them in public.

And anyone auditioning them really ought to try to listen to some very fine alternatives. As far as open-backed fidelity at this sort of money goes, Grado’s SR325e are difficult to argue with. They’re more affordable than the Alaras, they leak sound just as prodigiously and, while they’re a dynamic driver design, they have most of the space and pace the Brainwavz can deliver.

For a little more money, Audeze’s Sine headphones come onto the radar. They’re a planar magnetic design, but closed-back – so not quite as airy-sounding but then nothing like as leaky. In terms of precision they’re giving a little away to the Brainwavz, but they’re not as heavy nor as tricky to position comfortably on your head.

But if your head is big enough, your neck strong enough and your pockets deep enough, there’s a case to be made for the Brainwavz Alara.