The Bosch Serie 6 WAT286H0GB 9kg washing machine will set you back more than most, but delivers plenty for the price. Excellent efficiency, low running costs and time-saving features mean you’ll spend less of the week doing laundry. As an investment buy, it offers decent value, with a robust build quality, ability to adapt to different needs, and an app that has the potential to make life a bit easier.

Given that it’s capable of producing efficient, stylish models to rival many, Bosch’s washing machines should be far better known. The Bosch Serie 6 WAT286H0GB is a prime example.

It’s simple to use without having the manual at hand, can be loaded with detergent once and will use only what it needs, and is endowed with the sort of features once found on only high-end machines. This includes a pause to add extra items, an app that enables you to bolt on more programmes, and an interior light so you can spot stray socks that would otherwise be left behind.

Bosch Serie 6 WAT286H0GB design – Modern and sleek, with a drum that’s gentler than most on your wardrobe 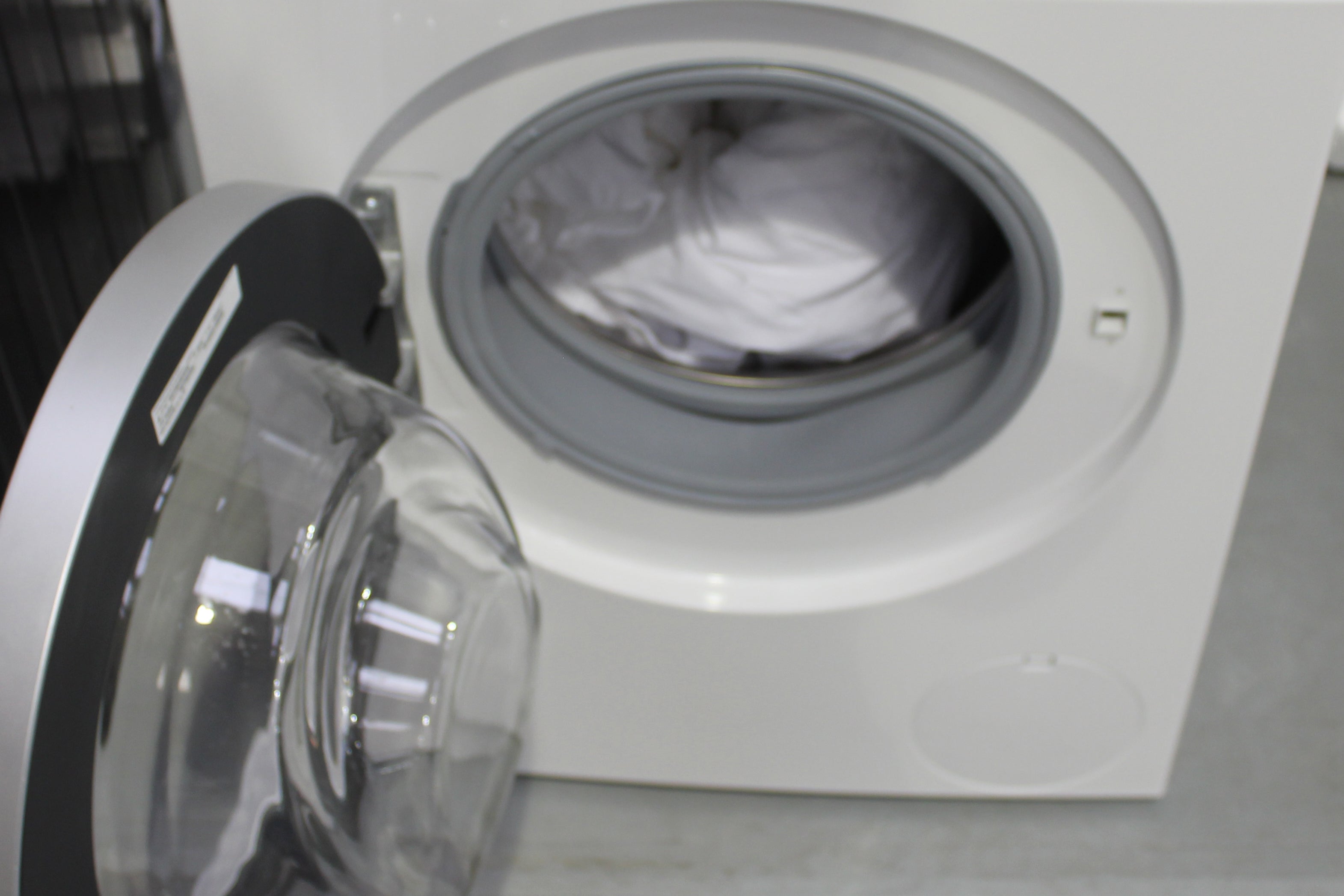 The door swings open wide on this model, making it easy to get larger items in and out

It might still be a big white box, but Bosch has done everything possible to make the WAT286H0GB stylish while remaining functional. The door has a silver metallic finish, and there’s a touchscreen for selecting different options.

Perhaps more importantly, everything feels reassuringly robust, from the illuminated control dial and sturdy detergent drawer, to the door that opens up to 171 degrees, making it ideal for getting large items – such as duvets – in and out. Another big plus is that the door doesn’t clash with the detergent drawer when it opens this wide, like it can on some models.

Loaded with almost 3kg of laundry, the 9kg drum felt pretty spacious; it could easily accommodate the other 6kg without much effort. The drum itself is also designed to be gentle as it washes, with scooped paddles that help keep the laundry moving whilst showering it with water, and a droplet pattern that cushions as it cleans.

The Bosch WAT286H0GB manages to strike the balance between enough programme variety for everyday use without feeling overwhelming. Perhaps the only one on the dial that could raise eyebrows is Down, for down-filled items such as cushions and duvets. In addition, it’s missing a synthetics programme, although Easy-Care will cater for this. Alternatively, the machine can adjust the wash to the load just by hitting start (although you’ll need to have i-DOS enabled, see below). 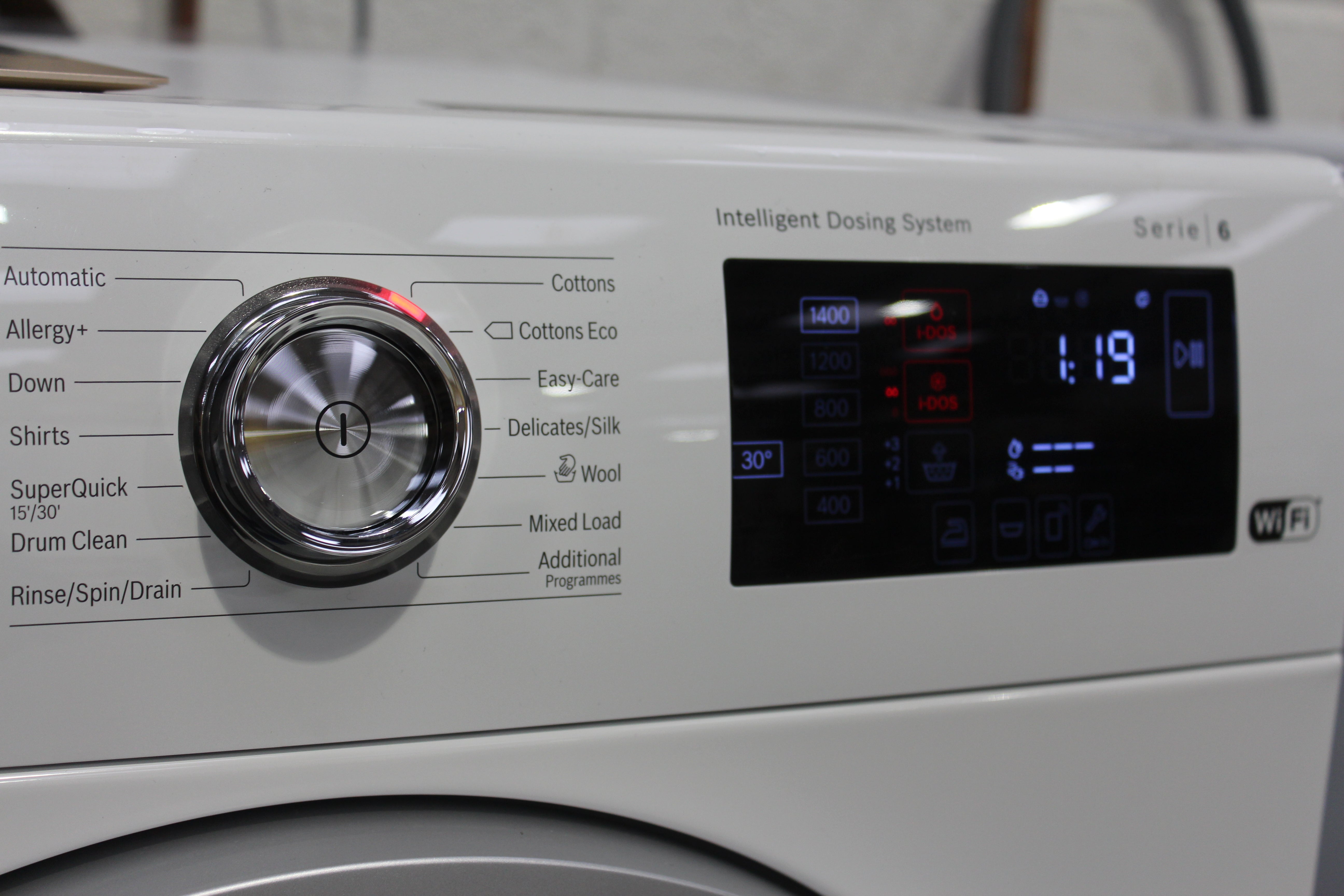 The controls cover most eventualities

There’s a clearly marked option on the dial for Additional programmes, which is where the extras that have been added from the Home Connect app live. Rather than being the usual baby care or allergy cycles, these include programmes for stain removal such as blood, butter/oil, grass and red wine, so could be useful in a busy family household.

The app is also more than just a way to turn on your washer remotely. It notifies when a laundry cycle is complete, so you don’t need to keep nipping back to the machine to check. It can be a little slow-moving between screens, but otherwise it’s an easy-to-use app that’s sure to be a permanent fixture on your smartphone. Plus, if you’re not sure if it’s right for you, you can add demo appliances without even logging in, which shows the sort of functionality you can expect. 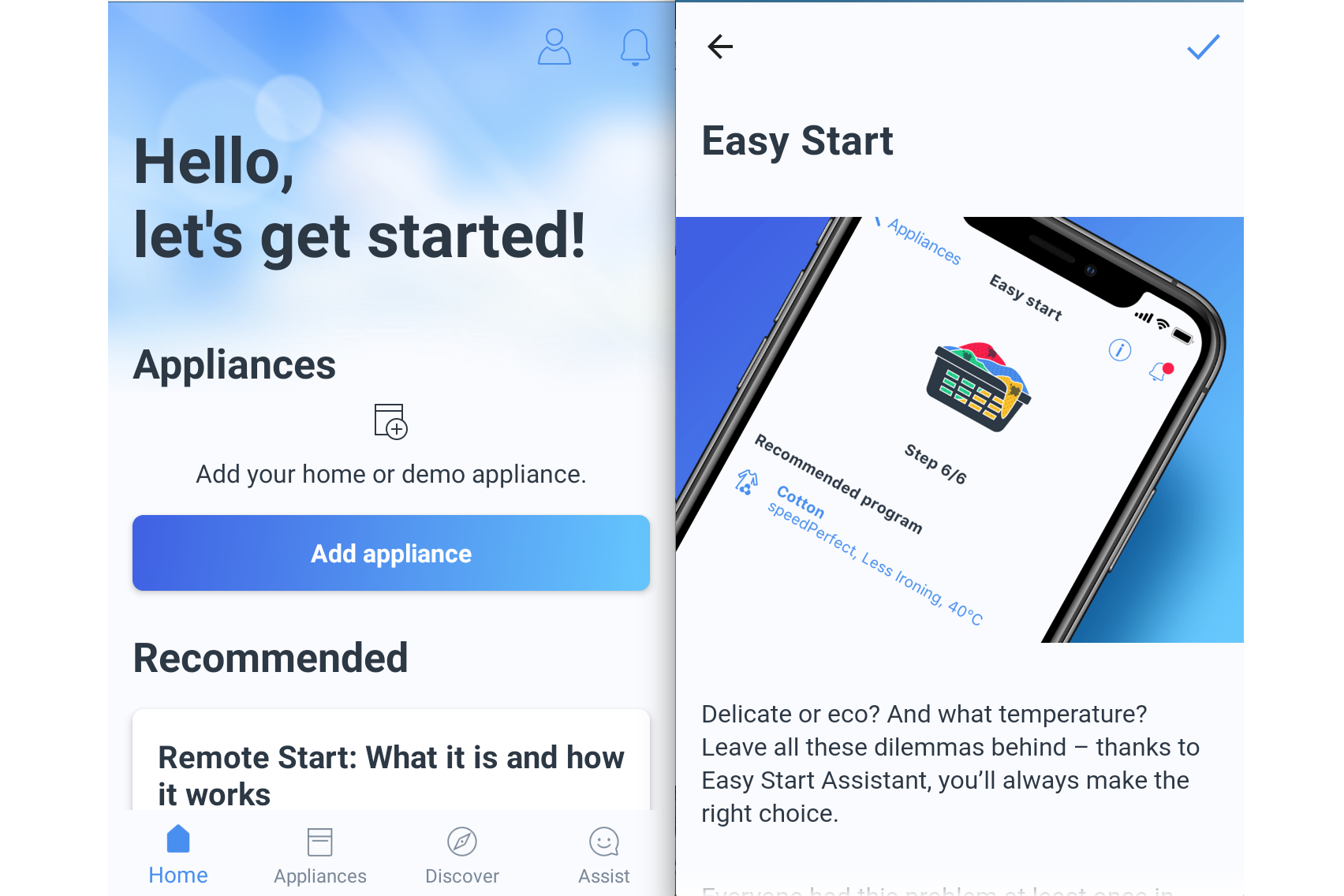 The other handy aspect of the app is that it can tell you when your machine’s detergent needs topping up. One of the main attractions of the Bosch WAT286H0GB is its i-DOS automatic dosing system, which allows it to be filled with a large amount of liquid, with the machine thereafter working out how much to use for each load.

Not only does this prevent laundry liquid and water from being wasted with each wash, but it also reduces the chance of the excess remaining in your clothes. That said, you’ll have to stick to normal liquid to get the best results – there’s no option to let it know that you’ve filled it with concentrated liquid, plus the Autodosing function has to be switched off for powder or specialist detergent.

You’ll also find plenty that’s fairly standard for a machine at this price point – a 24hr delay start, drum clean, ability to toggle time, temperature and spin speed within reason on various programmes, and a countdown timer – as well as a few features that aren’t. These include the Eco or Speed options, positioned below the start key, which either reduce the washing time or energy consumption; plus the ability to pause the wash to add items – although this doesn’t work if there’s too much water in the machine or the temperature is more than 50ºC.

A rating of A+++ meant that this 9kg machine should be fantastically efficient to run – and so it proved in both tests. A standard cotton wash at 30ºC used 0.36kWh of power, although water usage was a little higher than expected at 34.5l. A spin speed of 1400rpm left just over 1kg of water in the load, which was about 44% of the original weight. Surprisingly, the spin cycle is only B-rated, which explains why the clothes were a bit wetter than on some rival machines.

The stain strip of (left to right) dried red wine, vegetable oil, tomato sauce, orange juice and gravy, didn’t emerge as clean as expected. The wine and ketchup were still clearly present, although there was only faint evidence of the other stains. Switching to a 40ºC mixed-load cycle consumed more power – 0.71kWh – and more water at 44.8l, but the spin speed remained the same at 1400rpm.

This resulted in only slightly more water retention, 1.1kg, which is about 46% of the original load weight. While these figures were all higher, stain-removal proved far more effective. Now only the red wine showed clearly, with a faint smudge of ketchup; the other stains were hardly visible.

Noise performance was mostly in line with the machine’s EU energy label figure of 73dB for the spin. I recorded 71.6dB, taken from 30cm from the middle of the door. However, the standard wash appeared to be higher than its 47dB wash figure – I recorded 54.8dB.

Using the energy label as a guide, the Bosch WAT286H0GB should work out incredibly efficient over an average year. To calculate yearly figures, I used the EU energy label figures to work out the cost per wash. I then multiplied the average number of washing machine loads in the UK (274 per year), by three different load amounts (6kg for high, 4.5kg for medium and 3kg for low) to get a total amount of washing per year in kilogram. Dividing this by the Bosch WAT286H0GB’s 9kg capacity told me how many washes the machine would need to make running at maximum capacity to meet the yearly load, and how much the machine would cost on average.

This shows that the WAT286H0GB would cost £41 per year for high users, £30.75 per year for medium users, and £20.50 for low users – a saving that’s sure to help offset its price if looked at over the lifetime of the machine.

Should you buy the Bosch Serie 6 WAT286H0GB?

Excellent build quality, straightforward controls and a range of washing options all make the Bosch WAT286H0GB an attractive choice for powering through the laundry basket. While you’re unlikely to use its app much once you’ve added the programmes and options you want, the alerts are sure to prove handy for preventing forgotten loads lingering long in the drum, and reminding you to refill detergent.

Its running costs were very low, but the stain-removal could use work – given its price point, I’d expect better from the cotton programme. That said, compared to other machines, the Bosch Serie 6 WAT286H0GB was a joy to use – clear instructions, useful functions and a good-sized porthole made washing each load effortless.

This is a good, solid machine to upgrade to if you’re looking for better efficiency and time-saving features.