A clever concept with some neat features, but the Bosch 360-Degree Indoor Camera doesn't work as well as fixed-position models.

What is the Bosch 360-Degree Indoor Camera?

No matter how wide the lens on a security camera, there will always be part of a room or house that it won’t quite cover. With the Bosch 360-Degree Indoor Camera this isn’t an issue. The camera can be rotated via the app, so that you get a view of a whole room.

Tall and cylindrical in shape, the Bosch 360-Degree Indoor Camera looks far less like a security camera than much of its competition – and that’s no bad thing; it’s nice to have something a bit different.

Build quality is up there with other Bosch products, with the contrast between the metallic and white plastic, plus the thin mesh around the base of the camera, making for a neat finish.

There’s a microSD card slot around the back of the camera that’s pre-populated with an 8GB card. Bosch says that this is good enough for recording up to 200 events, with the oldest being overwritten by the newest. The camera is powered by a micro-USB cable that plugs into the rear. When it ships, the camera lens is hidden by the body, but it rotates up and out of the case, ready to shoot video. Since the camera rotates, you don’t have to worry too much about horizontal placement.

However, there’s no vertical adjustment, so getting the camera at the right height is essential. If you place the camera to high up a bookshelf, for example, it won’t capture the floor.

Installation is fairly straightforward. Simply plug it in, turn it on and install the app, which generates a QR code for the Bosch 360-Degree Indoor Camera to scan. This QR code contains the login details for your wireless network. Scanning would have been easier had the camera not screwed back into its case. A few power cycles eventually prompted the camera head to come back out.

Once the camera is connected, you can view the live stream. Swiping left or right on the screen rotates the camera, in order to change the view. There’s a fair bit of lag between swiping and the camera moving, and the action is a little fiddly in the app.

On the Live Stream view, you can use two-way talk. It’s fiddly to use, as you have to press and hold the microphone button to use the option. It also takes the app a while to connect the audio.

Once connected audio quality is pretty clear, but the camera is very quiet so you have to listen in to hear what’s going on. That might be an issue if you’re trying to scare away a burglar. 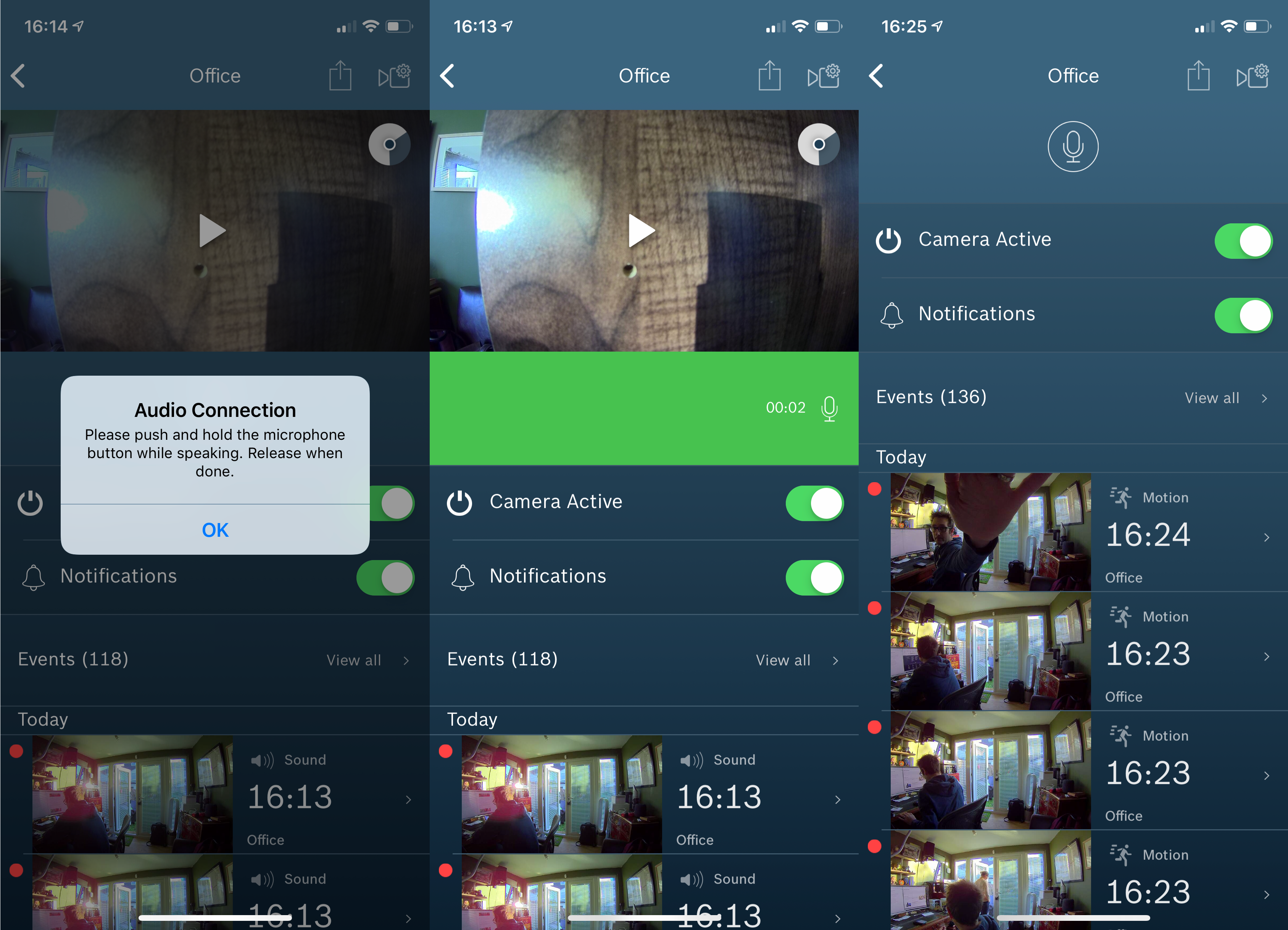 There are motion sensors around the base of the camera that capture 360-degree footage. From the app, you can turn on Auto-Rotate, which will automatically turn the camera to point in the direction the motion came from, so you won’t miss anything.

If you turn this off, the camera will remain pointing in a single direction. However, with its 120-degree lens, the camera can capture a good chunk of a room even in this mode, which makes the rotation element feel gimmicky.

If you don’t want the camera to record, you can double-tap the head to retract the camera away; a second double-tap brings the camera out of its shell. You can also use the Privacy option in-app. This provides an option whereby you can choose how long you want to keep the camera in Privacy mode: the options of 3 Hours, 8PM tonight, 7AM tomorrow and Indefinitely are a little random. It’s frustrating that you can’t set a timer or definitive time yourself, nor can you schedule when the camera is active.

Recordings are stored in a list with thumbnail and time next to them. Finding the most recent event is easy, but if you want to go back in time, there’s no option to filter events by date, which means a lot of scrolling.

Relying on the motion sensors helps the camera work out where motion is coming from and reduces false positives, such as changing shadows confusing the camera into thinking it’s seen motion. But relying on motion sensors also limits options. 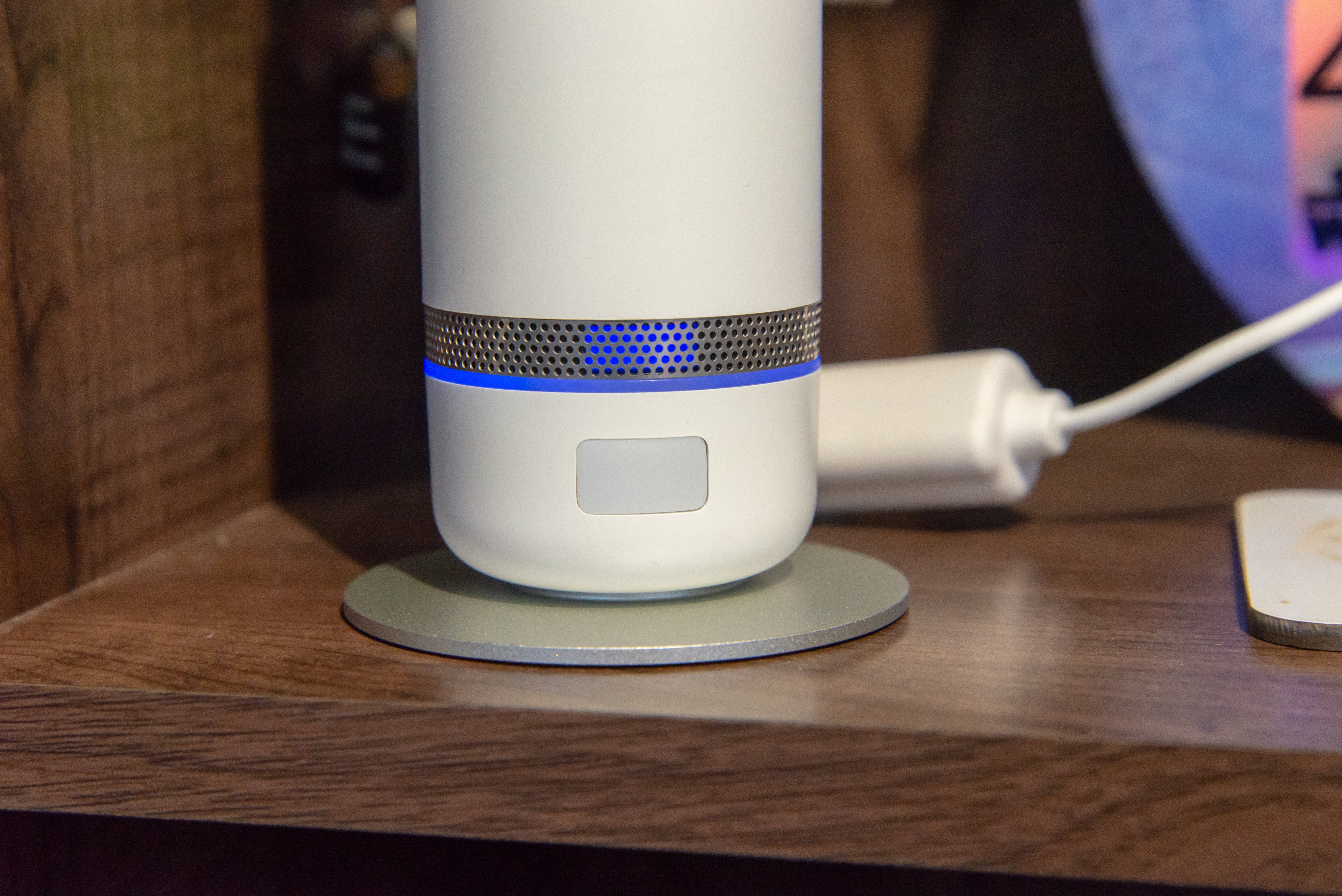 While you can adjust the motion sensitivity, you can’t draw activity zones to monitor only part of the image. Nor can the camera be trained to spot the difference between people or animals, or to perform advanced features such as face detection – functionality offered by the Nest Cam IQ.

You can also turn on audio detection, where the camera will listen for loud noises and warn if it hear something. There’s a slider that dictates the sensitivity. Smartly, the camera shows the current level of sound in your home, so you can adjust the slider so that general background noises don’t set off the detection. 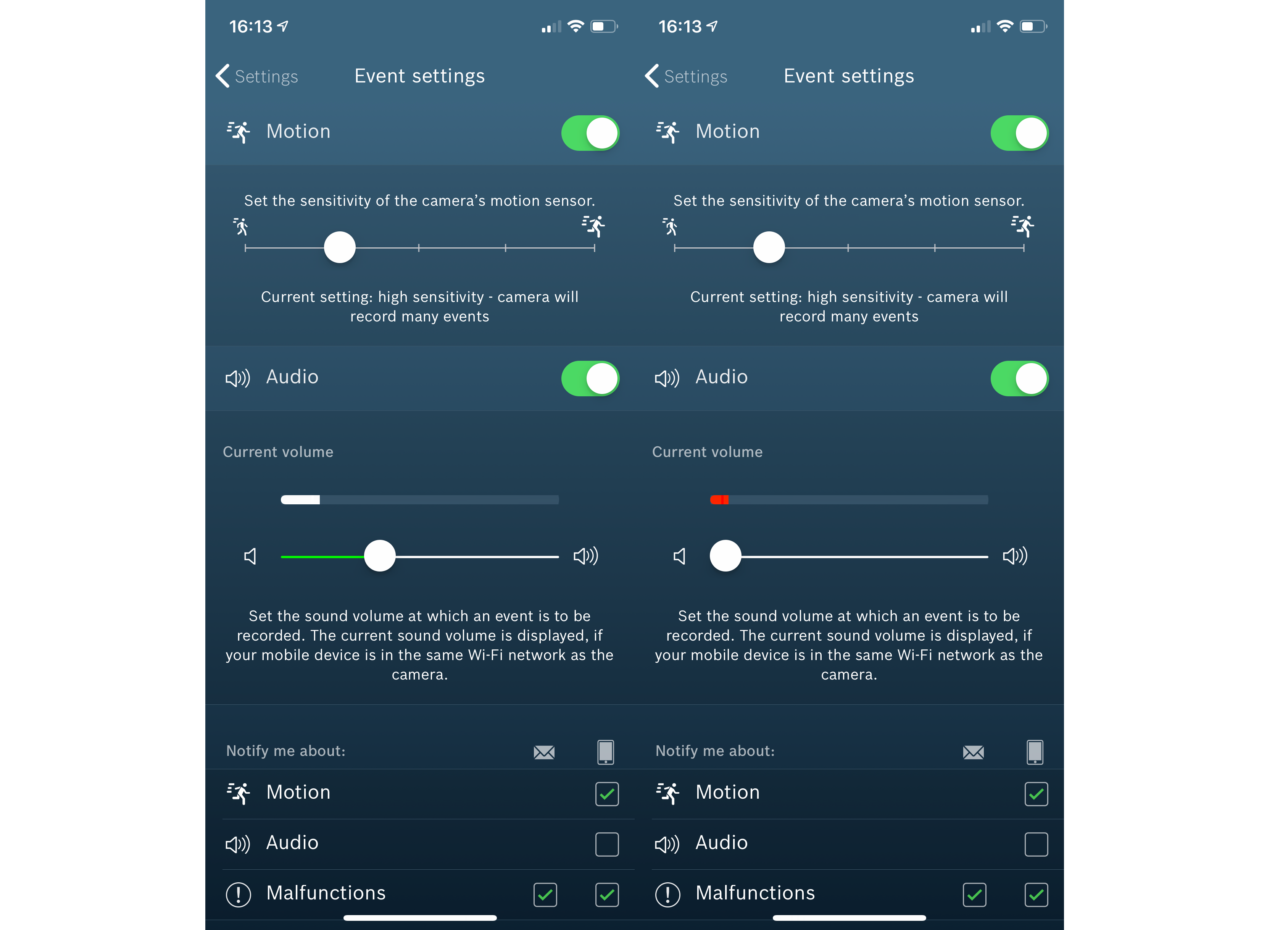 By default, the camera records everything when it detects motion. If you don’t have Auto-Rotate turned on, then you might end up with a clip where you can’t see what’s going on. Turning on Auto-Rotate at least means you should get usable footage each time.

If you have the camera near you while you’re in a room, you’ll be inundated with alerts, with the camera constantly beeping to let you know that it’s spotted movement. There’s no way to limit this; many video cameras will stop recording after constant movement to cut down on notifications. The lack of activity zones means that it’s hard to focus the camera on what you’re interested in.

Most clips are viewable straight away, but there were a few where I received an error message that said, “The camera has started transmission of the clip. This may take some time to complete.” In some cases, the clip was never available, despite the thumbnail clearly being visible.

Although the Bosch 360-Degree Indoor Camera has a 1080p camera sensor, footage is about average for security cameras. In daylight, there’s enough detail to work out individual faces – but details, particularly in the background, tend to get smoothed out. 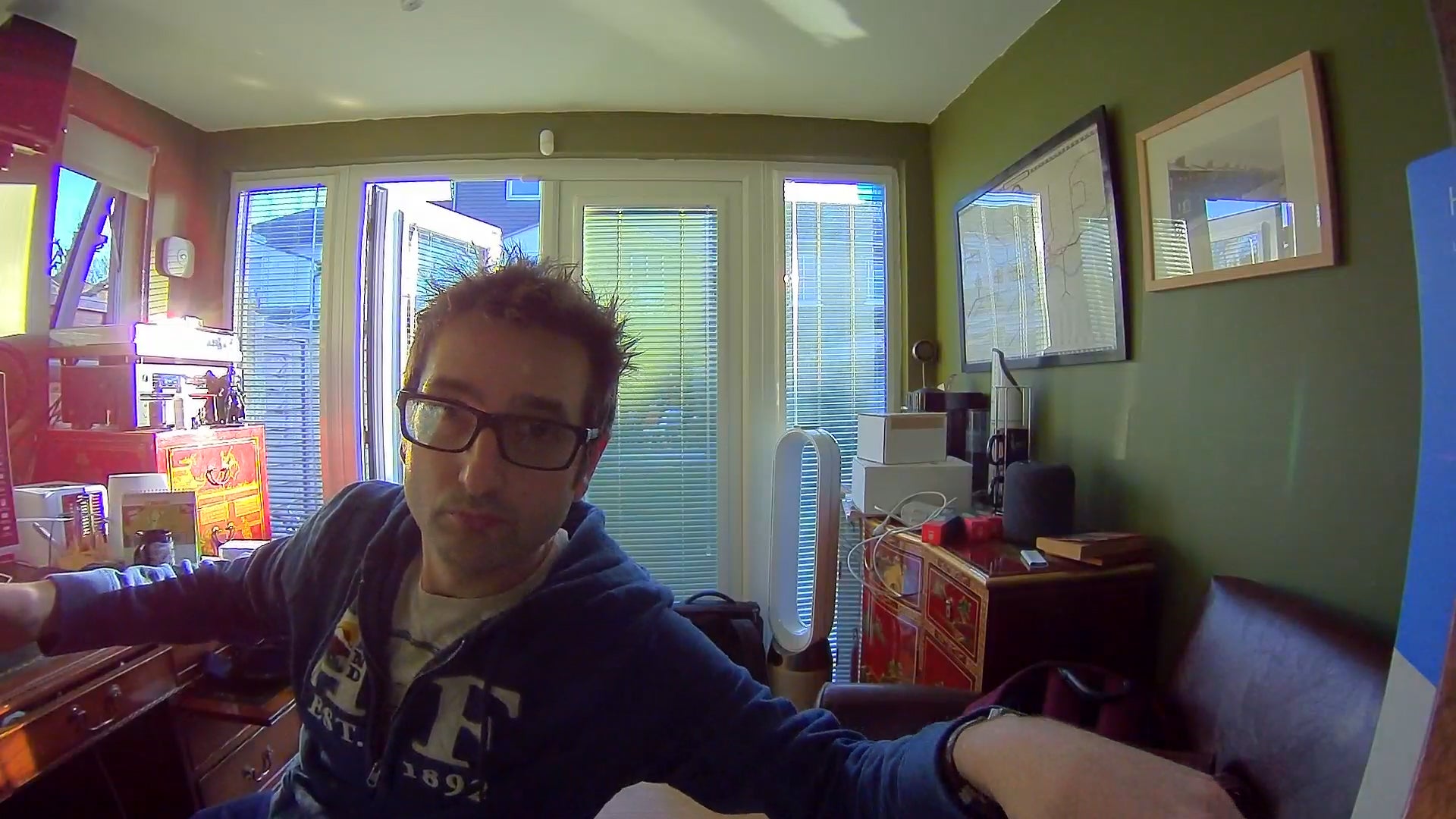 At night, the camera turns on its IR LEDs to light up the room. This works well, lighting up my entire test room. There’s some further softening of details, as is standard for IR, but you can still work out faces. 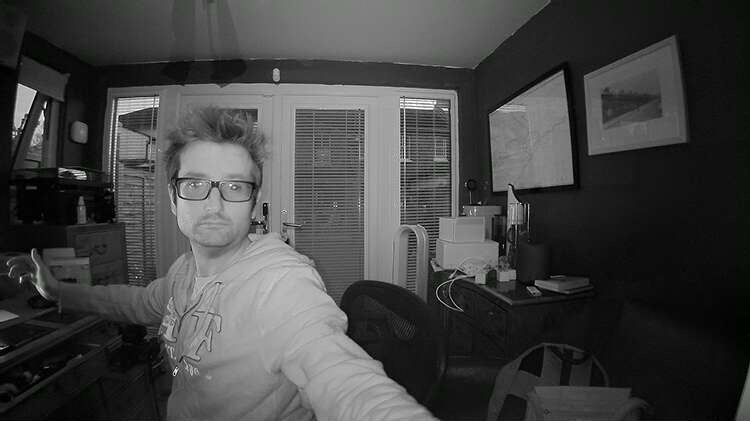 There’s currently no Google Assistant support, but there is an Amazon Alexa skill. Using this, you can stream the camera’s footage to a video device, such as an Amazon Echo Show.

You can also turn off the privacy mode with a command, but you can’t turn the camera back off for security reasons.

The initial concept is quite exciting, but adding a motor into a camera adds complexity both in terms of the product and in the range of features. On the one hand, having a 360-degree camera sounds like a great idea, but then stop and think about where you’re likely to place a camera. In the corner of a room, where most cameras will go, being able to look down both walls isn’t that useful; certainly not as useful as having vertical adjustment to capture what you want.

Then, there’s the issue of no motion zones, and that if you don’t turn on Auto-Rotate then you may not capture the parts of your room you want.

There are far better cameras available in our Best security camera guide.

The Bosch 360-Degree Indoor Camera is an interesting idea, but in real-world use, it falls behind the competition.