We’ve seen a steady stream of Biostar motherboards that support Phenom in recent times and in many respects they feel as though they have been leading up to the TA790GX A3+. The Biostar TA790GX A2+ that we reviewed last year uses a 790GX chipset with SB750 Southbridge but it supports Socket AM2+ with DDR2 memory. Meanwhile, the Micro-ATX TA790GX XE that we saw more recently is effectively a smaller and cheaper version of the TA790GX A2+ as it continues to use Socket AM2+ with DDR2.


The biggest difference between the two models is that the full sized motherboard supports dual graphics slots with CrossFireX while the Micro-ATX model only has room for a single graphics slot. By contrast this TA790GX A3+ supports a Socket AM3 processor with DDR3 memory and while the increase in memory clock speed from 1,066MHz to 1,333MHz is welcome it is only part of the equation. 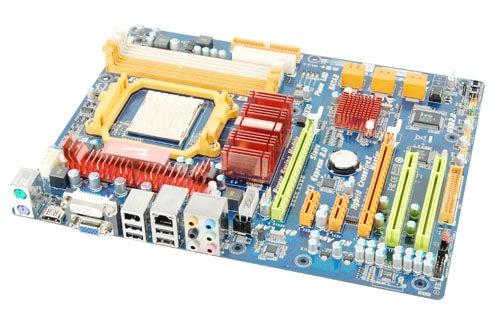 We have previously found that the combination of a Socket AM3 Phenom II in a Socket AM3 motherboard uses significantly less power than it does when you install the same processor in an AM2+ motherboard. This seems curious when you consider that the only chipsets on the market for AM3 Phenom II are AMD’s 790FX/790GX combo so the differences between one motherboard and another are necessarily quite small.

If you lay the TA790GX A3+ next to the TA790GX A2+ you will be hard-pressed to spot many differences as the major components have been carried over from the older model.


The two widely spaced PCI Express graphics slots are present and correct along with two PCI Express x1 slots and two PCI slots. The six SATA II connectors continue to be laid down at right angles to feed the SATA cables away from the graphics card(s). And, on the I/O panel the integrated HD 3300 graphics still have VGA, DVI and HDMI outputs and the on-board SidePort memory is still 128MB of DDR2.

You’d need the eyes of an eagle to spot the change in the four memory slots from DDR2 to DDR3 but you can get a clue about the work of the Biostar development elves when you look at the chipset cooling. The bronze coloured heatsinks on the Northbridge and Southbridge have been carried over from the TA790GX A2+ but the TA790GX A3+ has also sprouted a cooler on the Voltage Regulation Module. Take a closer look and you’ll see that Biostar has worked on the power hardware. In addition to the four-phase power on the TA790GX A2+ you now get an extra phase for the Northbridge and yet another phase for the CPU core that is intended to assist overclocking. Next to the DDR3 memory slots you’ll see there are two more ferrite chokes (they’re the grey cubes) that supply power more efficiently to the memory.


You may have spotted that the locations of the ATA133 and main power connector have moved slightly with the result that Biostar has created some space next to the main power block that is occupied by four LEDs. These Phase Status LEDS display the operation of the four-phase power which is interesting for a short time. Once you get bored with the disco lights you can disable them in the BIOS.

Biostar is putting the emphasis on power management in a range of motherboards that includes the TA790GX A3+ and we think that is a thoroughly good Idea. Saving power reduces unnecessary heat and thus lowers the need for cooling which in turn makes your PC quieter. This is especially important when you use integrated graphics as the absence of a graphics card fan gives you the opportunity to build a near-silent PC.


We ran the TA790GX A3+ with our regular Phenom II X4 810 which has a clock speed of 2.6GHz and the potential to overclock to 3.45GHz. We particularly wanted to test the Biostar using the integrated graphics as we’re none too impressed by Hybrid CrossFire where you ally the integrated graphics with an add-in graphics card. On the other hand we are most impressed by the integrated HD 3300 graphics in the 790GX chipset. Performance of the TA790GX A3+ was very good indeed on BIOS 325 that was supplied on our sample motherboard at standard speed but overclocking was fairly dreadful. Our 2.6GHz processor overclocked to 3.12GHz on a base clock speed of 240MHz which is significantly lower than the 3.45GHz that we saw on the Biostar TA790GX XE on a base clock of 265MHz. In addition the TA790GX A3+ wouldn’t complete 3DMark Vantage although that isn’t unusual for a motherboard with integrated graphics. 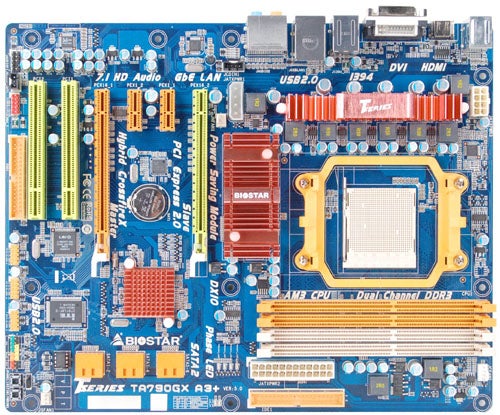 Biostar sent through an updated BIOS version 424 and we found that the TA790GX A3+ would now complete 3DMark Vantage and we could raise the base clock to 255MHz which gave a CPU speed of 3.32GHz.


Also, while we were overclocking we found that the temperature of the Northbridge cooler got rather hotter than we liked and it was unstable running benchmark tests until we added a case fan to keep the motherboard cool. This was all quite unexpected and is not in keeping with other AM3 motherboards that we have seen. We were so disappointed that we wondered whether we had a faulty motherboard so we had a second sample sent. The problem is that the results you see on our graphics come from the second – better – motherboard.


This is bad news for the TA790GX A3+ as we know full well that Biostar has come up with some decent AM2+ motherboards but somewhere along the way the development of this AM3 model has come off the rails.


The TA790GX A3+ is a perfectly decent motherboard that will be fine for a basic home PC. However, its performance is sub par so we feel there are better alternatives.