A couple of weeks ago we reviewed the Foxconn A7DA-S, which was our first AMD 790GX chipped motherboard and very nice it was too.


This week it’s the turn of Biostar with the TA790GX A2+ which is handy as it gives us the chance to clear up a couple of unresolved issues that we had with the A7DA-S. The first concern is the high SRP of £114 that Foxconn gave us for the A7DA-S. As we said in the review, we hoped that the price would drop to £70-£75 but Scan currently has this model listed at £108 so it looks like our hopes have been dashed. By contrast the Biostar is on sale at Envizage for a few pence over £60. Now that’s more like it. 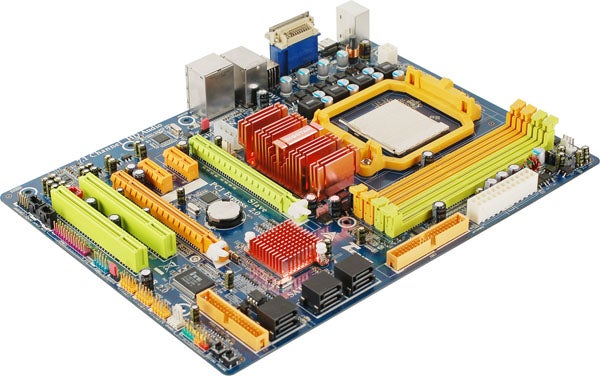 In our review of the Foxconn we were able to overclock a 2.5GHz Phenom X4 9850 Black Edition to 3.1GHz which was a revelation as we had previously had very little success overclocking Phenom.


We were happy with the Foxconn but were unsure who should get the credit for this feat. Was it AMD’s chipset team who created the 790GX + SB750, or was it the driver team that created the revised OverDrive software that works in conjunction with the ACC (Advanced Clock Calibration Link) or might it be Foxconn for bringing it all together in a new motherboard.


We were looking for the Biostar TA790GX A2+ to provide some answers in a direct comparison between the two 790GX models so for once we were pleased to see that the list of Biostar features was very similar to those offered by the Foxconn.


Both motherboards are regular ATX models that get most of their features from the AMD chipset and the layouts have a great deal in common too. There are four DDR2 memory slots with the main power and IDE connectors arranged at the edge of the board and the ATX 12V connector at the top of board. Foxconn plumped for a manly eight-pin connector while Biostar has chosen a puny four-pin connector. The bigger visual difference is the cooling system as Foxconn has used a large passive cooler on the Northbridge that is joined with a heatpipe to a second cooler on the power regulation hardware. By contrast Biostar has left the power hardware naked but that’s pretty much the end of the differences. 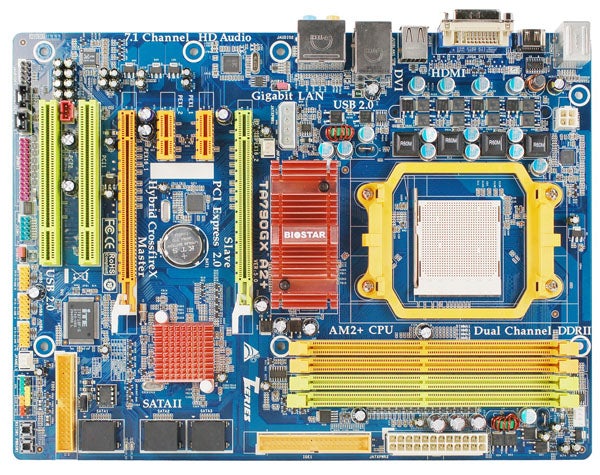 The layouts are so similar that you have to suspect that both manufacturers are following a reference design from AMD.


The two PCI Express graphics slots support CrossFire so you get 16 lanes of PCIe 2.0 with a single graphics card and eight lanes per slot in CrossFire. At least that’s how it works with the Foxconn but with the Biostar the split is fixed at eight lanes per slot so anyone using a single graphics card has to plug a switch card into the second slot to ensure all 16 lanes are fed to the Primary slot – a first clue as to the Biostar’s low price.

Between the graphics slots you’ll find two PCI Express x1 slots and the BIOS battery and at the foot of the board there are two PCI slots, USB headers, micro buttons for Power and Reset and colour coded pins for the front panel headers.


Biostar hasn’t included a Firewire port but far worse than that there are only four USB 2.0 ports on the I/O panel and there are no brackets in the box. This is inadequate as we regard six USB ports as an essential and prefer to see eight ports. Foxconn committed the same sin and we simply cannot understand the reasoning. 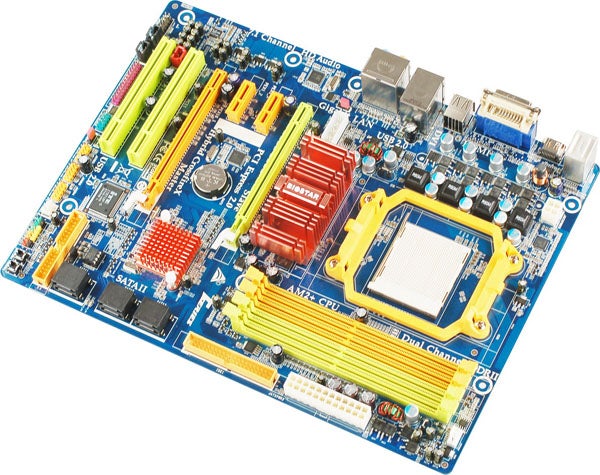 We started our testing by plugging in a hard drive that had been running on an Intel motherboard. The drive Plugged and Played happily and we loaded the ATi chipset drivers without any trouble. We couldn’t get our Phenom X4 9850 to overclock and the Biostar also seemed flaky when we raised the memory speed from 800MHz to 1,066MHz which was something of a surprise after the overclocking joy we had experienced with the Foxconn. It was time to get serious so we nuked the hard drive and installed 32-bit Vista Ultimate Edition from scratch but still ran into the same problems time and time again.


The spirit of optimism started to flag as we fiddled around in OverDrive which we had to download from AMD’s website – it is a complete mystery that Biostar and Foxconn don’t include this software on their driver CD.


We switched Cool ‘n Quiet on and off and also toggled through the ACC settings and found that nothing would make the Phenom respond to our overclocking efforts. With ACC disabled the Biostar simply would not overclock but things got more interesting with ACC on Auto. It seemed that we could raise the clock multiplier from 12.5x to 14.5x to give a clock speed of 2.9GHz but things were not as they appeared. You can see in our tests results that the 2.5GHz and 2.9GHz speeds give exactly the same performance. Increasing the memory speed from 800MHz to 1,066MHz resulted in lower performance instead of a healthy increase as we would have expected.


Diving into the BIOS allowed us to increase the not-a-front-side-bus clock from 200MHz but we couldn’t adjust the clock multiplier. Increasing the 200MHz clock to 210MHz led to an immediate system restart so we threw our hands up and gave up with the overclocking. 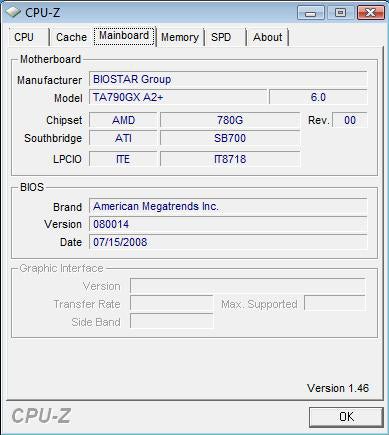 You’ll see that our CPU-Z identifies the chipset as 780G + SB700 and we noted that BIOS has options for ‘AMD 780 Configuration’. All of which would suggest this board’s BIOS simply needs a bit more tweaking.


On the other hand you have to wonder about the huge price difference between the Biostar and the Foxconn. The cheaper Biostar behaves exactly like a 780G motherboard and refuses to overclock while the expensive Foxconn is a completely different proposition and flies like the wind.


While 790GX was supposed to offer similar performance to 780G but with better overclocking potential, Biostar has proved that the overclocking side of the equation is far from a given. That said, considering its price and the fact there are few other areas for complaint, it’s still worth considering.